Pivot potential: A deep dive into offshore wind in the Gulf of Mexico

After years of blunted growth and false starts, the US is finally scaling up offshore wind, with the Gulf of Mexico as the potential new setting.

For most of the millennium, Europe has outpaced the US in constructing and installing offshore wind projects. But the tables are turning: The US has pledged to procure a collective 40 gigawatts (GWs) of offshore wind capacity in the Atlantic Ocean by 2040.

On a shorter timescale, the Biden administration announced a 30 GW offshore wind target by 2030, the first such federal goal for this technology. According to the White House, if the industry reaches the 30 GW target, offshore wind projects could generate upwards of US$12 billion in capital investments annually over the next decade. In the Inflation Reduction Act of 2022, Congress appropriated US$100 million in funds through fiscal year 2031 to the Department of Energy (DOE) for interregional and offshore wind transmission planning, modeling and analysis.

In 2020, the overall US offshore wind pipeline of projects—either proposed or in development—grew by 24 percent year-over-year (from 28.5 GWs in 2020 to 35.3 GWs in 2021). Currently, there are only two operational utility-scale projects, which together comprise 42 megawatts (MWs) (Block Island Wind Farm and Coastal Virginia Offshore Wind), with another 800 MW project (Vineyard Wind I) commencing construction in the near future. The recent approval of the larger project, Vineyard Wind I, should beget insight to both regulators and developers alike, and ensuing proposals will likely hew closer to the 800 MW size of that project rather than the smaller 42 MW size of Block Island and Coastal Virginia.

Nearly 10 GWs of other projects are in phases approaching installation and commercial operation in the near- to medium-term—the "permitting" and "approved" designations.

Technological advancements in platform and turbine engineering should also generate additional revenue-additive opportunities. Deeper foundations can yield more favorable outcomes for projects broadly, as the installation could be placed further out from land—thereby alleviating possible concerns about competition with other ocean industrial activities and reducing visibility from shore for aesthetic reasons. Capacity factors of wind facilities have also increased steadily due to larger blade sizes, taller towers and more optimal placement relative to resource availability.

On a cost basis, offshore wind is competing adeptly with other energy resources. Since 2012, the levelized cost of energy (LCOE) for offshore wind has plummeted by 67 percent. Financial instruments deployed in offshore wind investments across the world have evolved in concert with technology, including competition in international markets and reduced lending rates for project development. In the first half of 2020 alone, firms invested US$35 billion in offshore wind, eclipsing the entire total for 2019 and setting a torrid pace for the industry. 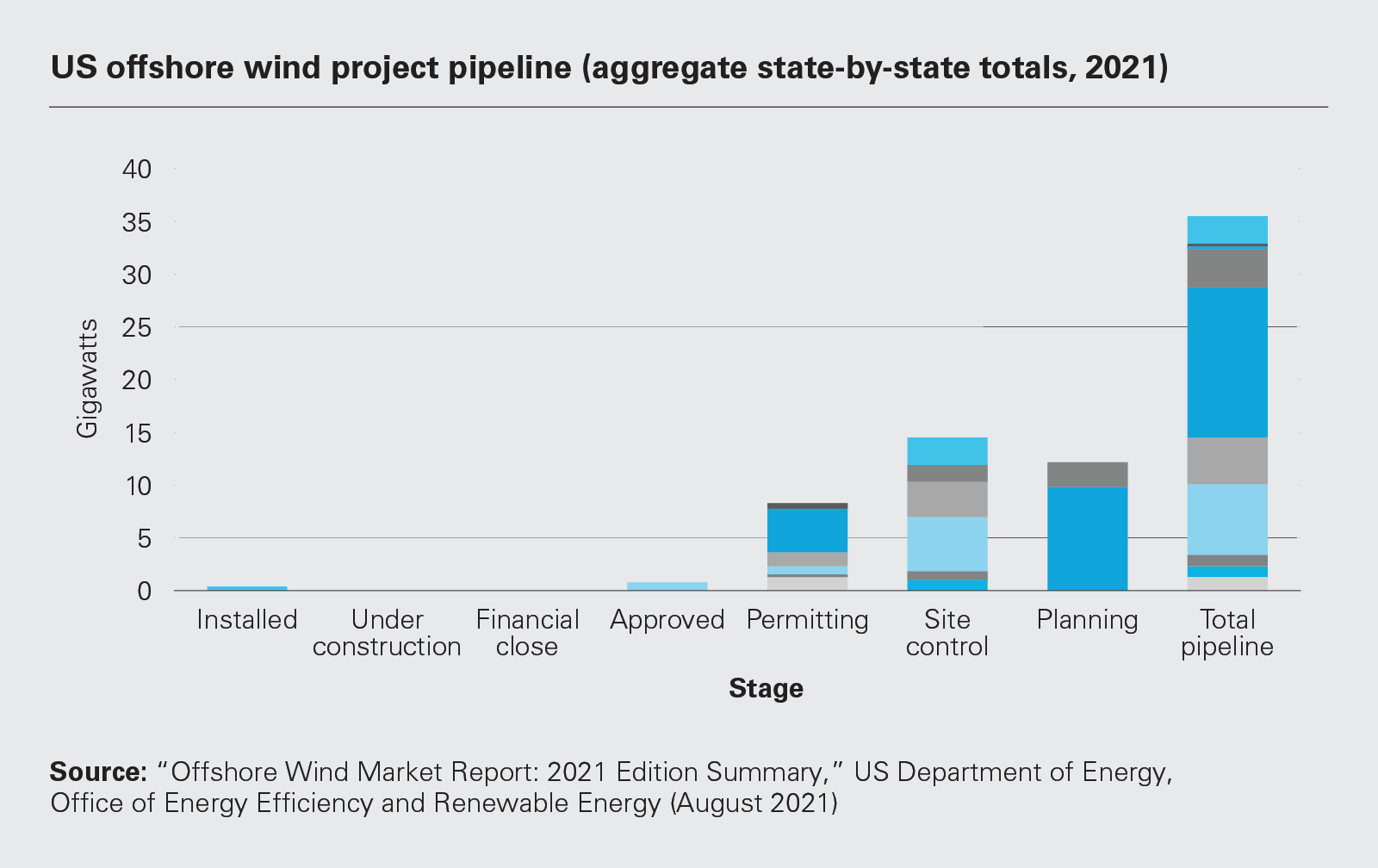 While the US has rapidly accelerated its pace in adopting offshore wind, primarily in the Atlantic Ocean, no projects have yet been proposed or constructed in the Gulf of Mexico (GoM). However, the technical resource potential in the GoM is estimated at 508 GWs.

However, most feasible areas of development in the GoM would yield relatively low wind speeds. If projects used current turbine designs and technology, sites with low wind speeds of seven to eight meters per second may only yield a net capacity factor of 30 to 40 percent. Developers can circumvent this natural limitation by increasing the size of rotors, as that practice has been proven viable for onshore wind facilities.

Current projections ascribe the highest resource potential to the coastal waters of Texas and Louisiana, respectively. Newer studies with increased precision may yield additional opportunities for nearby GoM states such as Alabama, Florida and Mississippi. In any case, offshore wind projects could spur significant economic activity for the region. Further, states could emulate the approach in the Northeast and Mid-Atlantic regions in setting robust targets for offshore wind while gleaning lessons from nearby proposal processes and competitive bid solicitations.

Offshore wind development could generate positive, long-term returns for an array of participants and bolster grid reliability in the states bordering the GoM.

Overlaps and synergies with existing energy infrastructure in the GoM

Dating back several years ago, pilot research and development programs in the US have deployed prototype floating foundations. Traditionally used in the offshore oil & gas industry, floating sub-substructures would enable developers to site wind turbines in deepwater areas while accommodating the unique technical characteristics—namely the dynamic nature and sheer scale and height of blades, rotors and turbines, along with the weight distribution needed to stay afloat, particularly when subjected to storms and hostile weather.

Inversely, the shallow waters off the coasts of Texas and Louisiana present several drivers of overall project cost reduction when compared to other offshore projects located in the Atlantic Ocean, including comparatively warmer water and closer proximity to local and regional supply chains, which all collectively improve access to the technical features of an offshore wind-generating facility.

Even though the GoM is yet to host an offshore wind installation, a number of manufacturers in the region—those typically serving the offshore oil & gas industry—have already produced components and foundations for offshore wind projects in other regions as part of a strategic pivot toward the renewable energy sector. 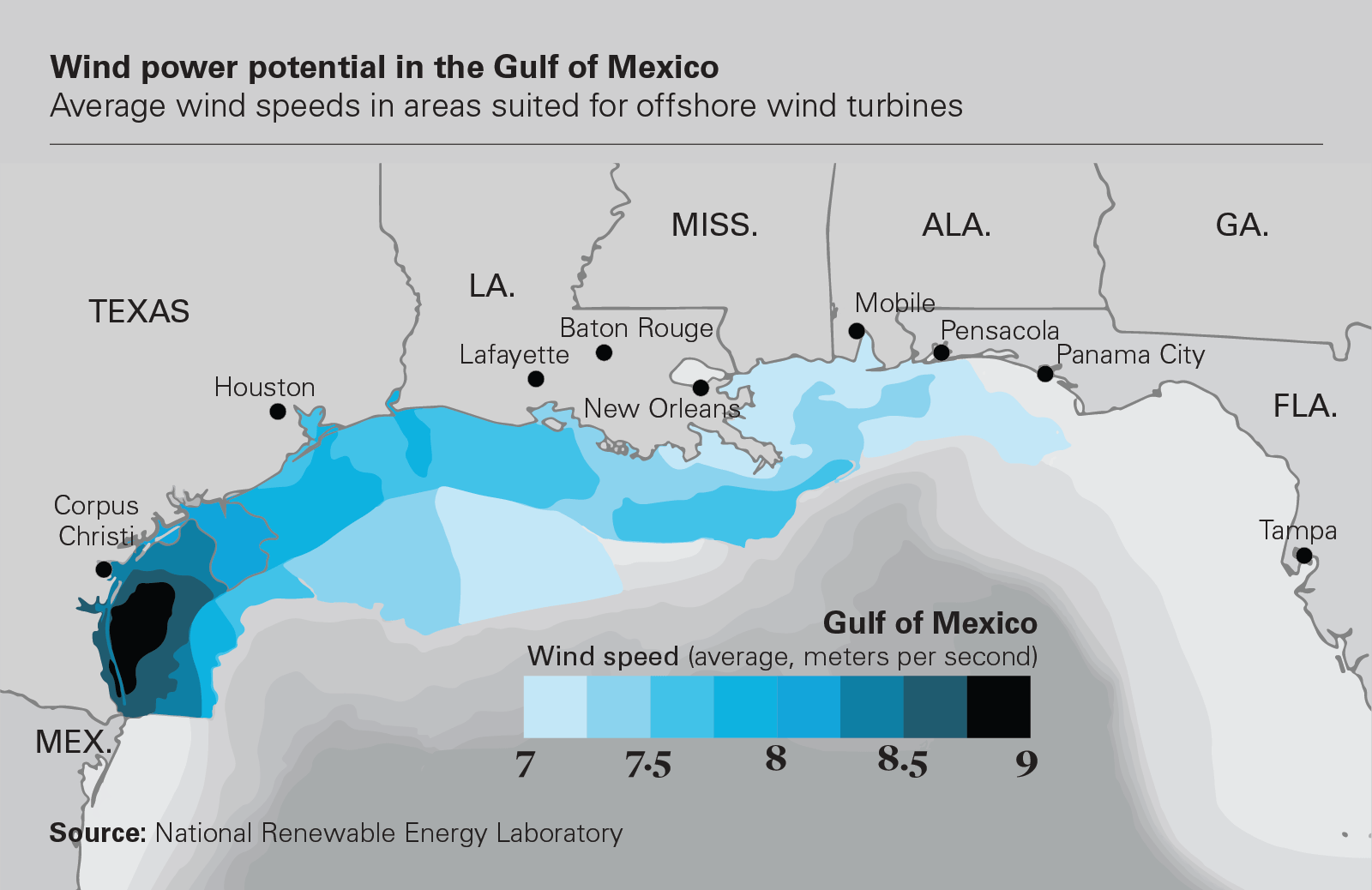 The offshore wind industry in the US is still in its nascent stages. In no aspect is this more apparent than the lack of regulatory certainty and clarity on time frames for project approval. In March 2021, the Bureau of Ocean Energy Management (BOEM) issued its first environmental impact statement (EIS) for a utility-scale offshore wind project that was initiated in December of 2017.

While it is highly unlikely that subsequent project applications will necessitate such a lengthy environmental review, the BOEM has yet to establish a demonstrable track record in providing a clear roadmap going forward. In the meantime, developers have to contend with a complex web of federal statues and regulations, and also account for a host of jurisdictional issues at the state level for any prospective offshore project.

This federal-state nexus has been a matter of contention in many other arenas of the domestic energy sector, and is poised to cause similar issues as offshore wind deployment scales up. If there is wisdom to be gleaned from other resources, the primary question will be centered around when state-level jurisdiction or authority will supersede that of a federal agency, or simply delay the process enough to effectively halt application approvals altogether.

As part of its Inflation Reduction Act of 2022, Congress appropriated US$20 million to hiring additional permitting personnel at the National Oceanic and Atmospheric Administration (NOAA). Since the NOAA plays a crucial role in reviewing and approving components of offshore wind regulatory applications, increasing permitting staff will hopefully keep pace and improve efficiency of a historically fragmented process.

The warm waters of the GoM bolster hurricane strength and pose significant risks to offshore and onshore infrastructure, and unlike offshore wind facilities on the East Coast, GoM developers will need to address technical considerations stemming from extreme weather events.

To some extent, offshore wind developers may be able to learn from the offshore oil & gas industry, which has endured decades of hurricanes in GoM waters. However, the core aspects of wind turbines—height and profile—differ dramatically from oil rigs and associated platforms: Taller turbines are more susceptible to swaying if the foundation is not also proportionately constructed. The offshore wind sector needs to research and develop specific standards to withstand hurricanes. Site-specific studies and risk assessments will be necessary to design foundations and turbines, particularly if alternative load mitigation may be critical to maintaining movement of the axis so that turbine rotors and blades do not shift direction inadvertently during periods of extreme weather.

Project developers and regulators will need to take that and other regional differences into account when evaluating the robustness and strength of turbines sited in the GoM, especially given the fact that such turbines will invariably be in the direct path of strong storm systems or hurricanes. 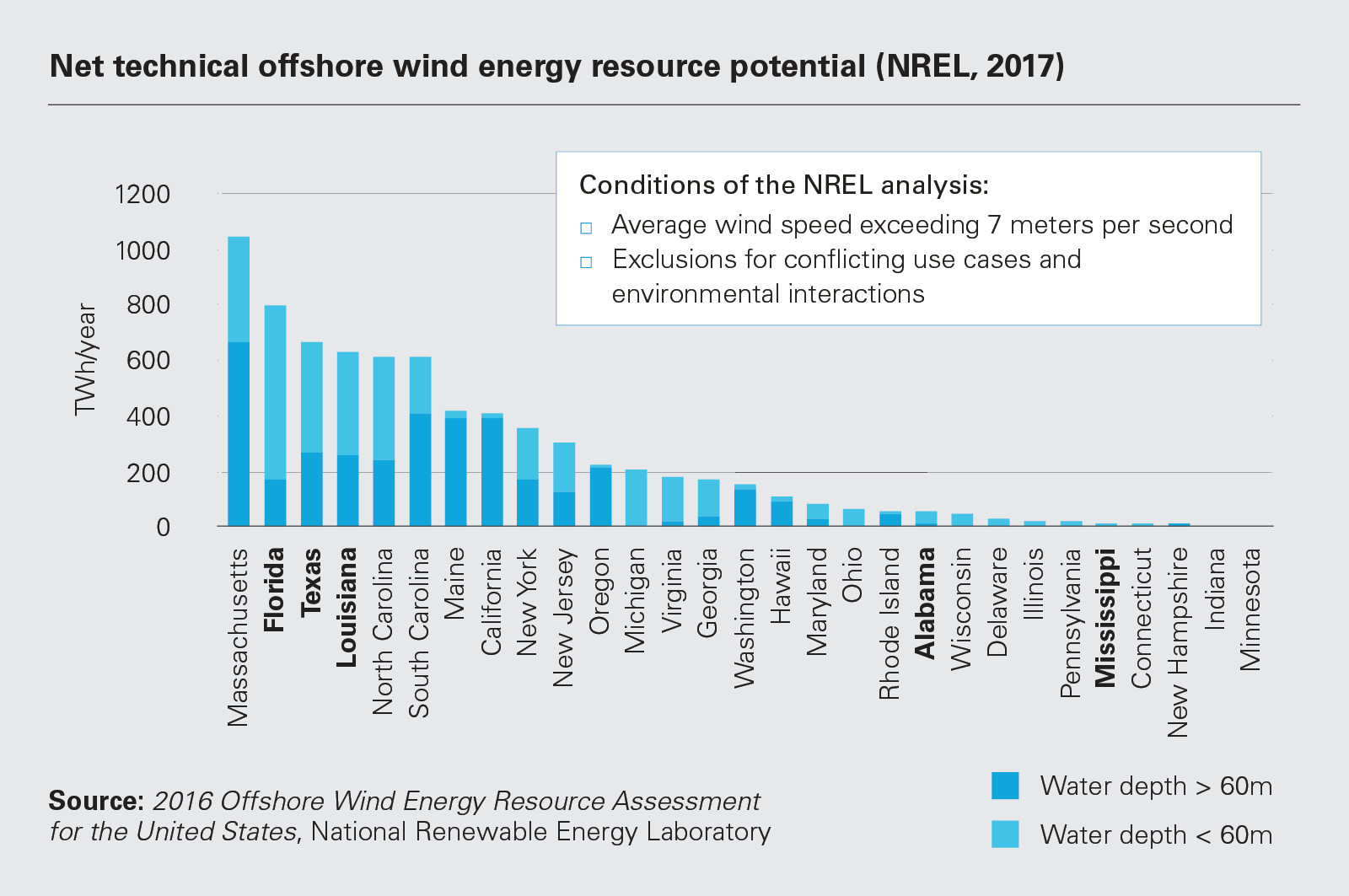 Of the GoM states, Texas and Louisiana are most optimally positioned to readily embrace offshore wind as a new segment within their energy mix. Texas, for example, boasts the strongest quality of offshore wind resources due to having the highest average wind speed, bolstered by plentiful and advanced energy infrastructure both onshore and offshore. Additionally, Texas can draw from its lessons and best practices as a national leader in renewable energy; in 2021, Texas led the US with more than 7,300 MWs in new renewable capacity additions and nearly 20,000 MWs in future projects in the pipeline.

Louisiana, on the other hand, is pursuing renewable energy through policy mechanisms. In fact, Louisiana is the only GoM state that has prioritized climate change goals and recognized that offshore wind can be a key part of meeting such milestones. At the time of publication, Louisiana was the only GoM state with a formalized strategy to reduce greenhouse gas emissions. Louisiana is pursuing a 25 to 28 percent reduction in emissions by 2025 and carbon neutrality by 2050. The Louisiana Climate Initiative Task Force revealed in its draft final report that planning to construct and bring into commercial operation 5,000 MWs of offshore wind will be necessary to meet the statewide goal of carbon neutrality by 2050.

In 2021, the BOEM established the Gulf of Mexico Intergovernmental Renewable Energy Task Force, which includes the states of Alabama, Louisiana, Mississippi and Texas, to share insights and collaborate during the incipient stages of building out a new energy sector in the region.

In January of 2022, the BOEM initiated a monumental step in unleashing the GoM’s potential for offshore wind by announcing it was conducting an Environmental Assessment to evaluate prospective Wind Energy Areas (WEAs) in the region. If the GoM WEAs yield a favorable outcome, then certain WEAs will be auctioned for leasing to project developers.

The GoM is the birthplace of offshore energy development: the global, multibillion-dollar offshore oil & gas industry. The energy supermajors, who started out as oil & gas companies, are now diversified and sophisticated energy companies actively pursuing opportunities in the growing development of US offshore wind.

Industry observers expect that oil & gas companies will participate heavily in upcoming seabed lease and subsidy auctions. In 2022, these auctions will exceed 20 GWs of offshore wind-generation capacity, posing a significant opportunity for new market entrants. Large oil & gas companies, with their drive for innovation and the balance sheets to back it up, will be optimally positioned to bolster their odds of winning BOEM auctions. Energy supermajors will have a natural advantage in the offshore arena—particularly in the GoM—over emerging renewable energy-focused companies.

Oil & gas majors will not be deterred by the uncertainty inherent in such projects: A typical exploration venture into oil & gas will encompass similar, if not greater, risks. Incorporating new and emerging renewable assets, such as offshore wind, is now increasingly perceived by these companies as a viable business case both in terms of economic returns and allaying public concerns about environmental impacts.

BP, TotalEnergies, Shell, Equinor and other leading oil & gas companies have already committed substantial financial resources to offshore wind in European waters. Shell, for instance, intends to allocate more investment toward two offshore wind projects (proposed to be sited off Scotland) by 2030 than toward its entire oil & gas segment in the same period.

Offshore wind development in the GoM is an untapped opportunity for large-scale renewable generation. Renewable developers may have an initial head start in forecasting resource potential and facility design, but fossil fuel stalwarts can easily leverage their strength and experience to their advantage in the long-term.