As part of our periodic updates, we will provide you with an overview of recent developments of relevance to participants in the real estate finance market and who may have an interest in the jurisdictions in which we have offices. For further details on any of the below, please feel free to contact the relevant country partner or your usual White & Case contact.

On January 19, 2018 the Finnish Ministry of Finance published a draft Government Bill proposing changes to the Finnish Law on Taxation of Business Income. The majority of proposed amendments are based on the interest deduction rules of EU Anti-Tax Avoidance Directive. The amendments will expand the scope of the interest limitation rules and tighten the deductibility of interest expenses and is therefore likely to impact the structuring of Finnish real estate finance deals. The draft Government Bill has been circulated for comments and the amendments, which may deviate from the current draft, are proposed to enter into force from the beginning of 2019.

The current interest deductibility limitations only apply to interest payments between related parties and certain industries are carved out from the applicability of such limitations. The draft Bill proposes that interest deductibility limitations would apply to interest expenses generally, including those payable on loans from unrelated, external parties. Further, all corporations with a permanent establishment would be subject to these rules, including real estate companies which are currently excluded from the scope of application.

Furthermore, the exemption regarding financial companies and current balance sheet based safe harbour, pursuant to which interest deduction limitation rules do not apply if the company can file a submission stating that its equity to total assets ratio is greater than or equal to the corresponding ratio of its adopted consolidated balance sheet, will be removed.

Possible effects of the proposed amendments

According to the Finnish Ministry of Finance, the proposed amendments would have a significant positive effect on the tax base of Finland. Correspondingly, for entities which are currently excluded from the scope of interest deduction limitation rules, the proposed amendments would mean a significant change by creating a stricter environment for their current financial structures. In practise, among others, financing structures used in real estate finance transactions should be re-evaluated as some of the internal financing expenses would become non-deductible. Additionally, this would also mean that the use of internal loans within a group, will diminish in relation to future real estate finance transactions and, in respect of current financial structures, companies must further consider options such as conversions of internal loans into capital or transfer of debts by debt push down arrangements.

Recent judgments of the German Federal Court of Justice have held that pre-formulated fee arrangements where fees are payable by a borrower independent of the terms and structure of the underlying loan are invalid even where the borrower is an entrepreneur (rather than a consumer). It was held that a bank may only charge amounts other than interest if a corresponding service is provided to the borrower or the relevant fees are individually negotiated (note the threshold as to whether a fee is individually negotiated is quite high).

As such, borrowers may be entitled to claim the repayment of various fees which have been payable as of 2015 (claims prior to 2015 are time-barred). The types of fees which could be the subject of claims include handling fees, arrangement fees, underwriting fees, assessment fees, commitment fees and (to some extent) structuring fees together with any related third party costs. As a result there is currently some uncertainty in the market as to whether borrowers will be successful in reclaiming any fees that have already been paid and how fee arrangements should be structured in order to ensure that financial institutions validly generate such fees.

Recent amendments to German VAT guidelines have extended the general VAT exemption for the rental of real estate to furnishings rented out together with the real estate (though some exemptions are possible). Such furnishings could include movable inventory in a retirement home or movable office furniture although any operating equipment which is rented out will remain subject to VAT. It will therefore be important for those who rent out real estate together with furnishings to be mindful of the new rules. 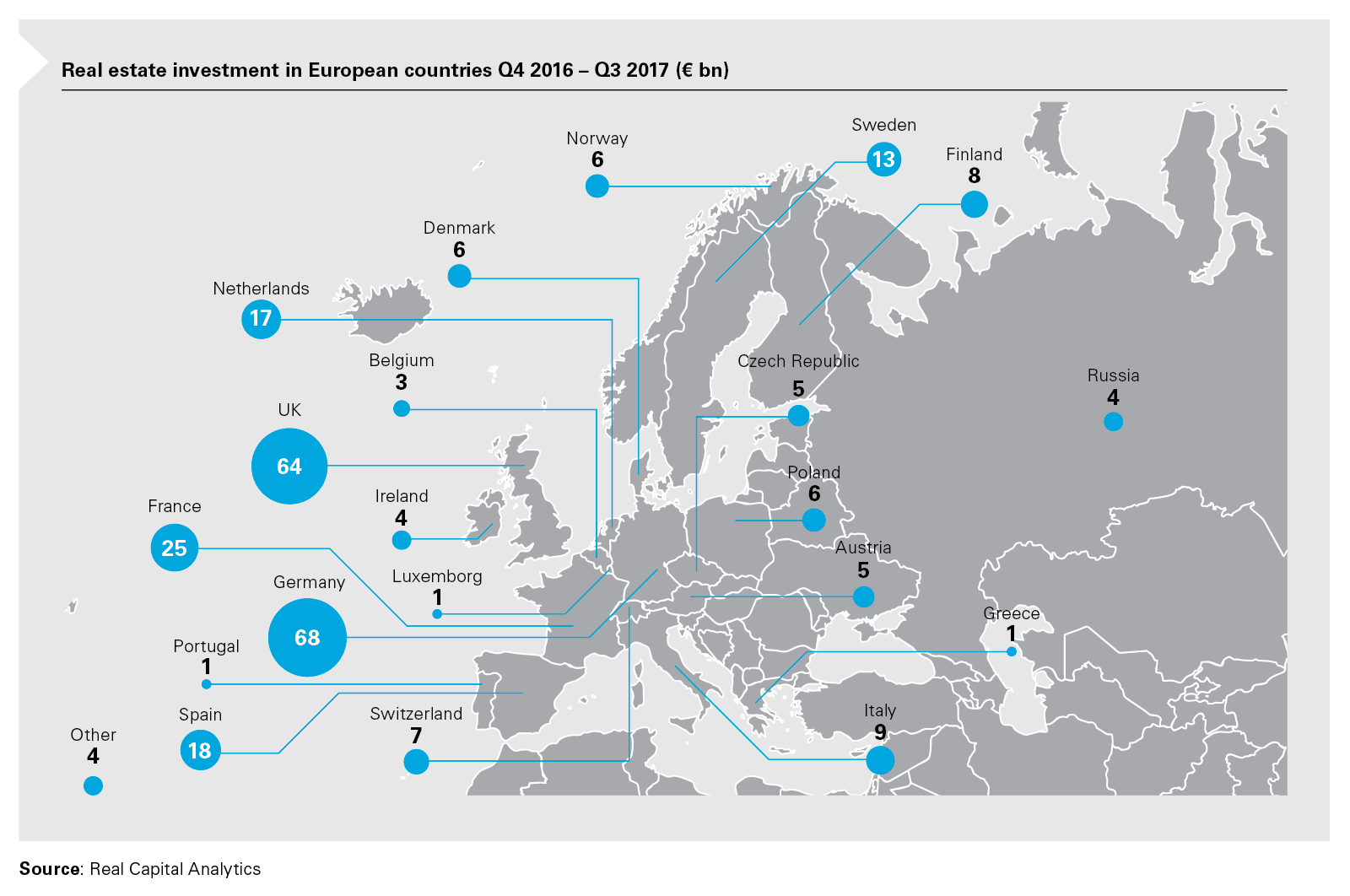 Ban on Sunday trading in Poland

Due to recent law changes, Poland will see a gradual ban on Sunday shopping that will limit Sunday trade to two Sundays in a month from March 2018, and then to one Sunday in a month in 2019. From 2020, stores will be allowed to open only on seven Sundays a year. The ban, however, does accommodate numerous exemptions including for example small private retailers, e-commerce, pharmacies, cafes, restaurants, gas stations and flower shops.

New tax law introduces a tax on income derived from certain fixed assets situated in the territory of Poland whose initial value exceeds PLN 10,000,000 (approximately €2,500,000), i.e., commercial buildings classified as shopping centers, department stores, shops, boutiques, etc., as well as office buildings. The tax base is the income equal to the original value of the fixed asset as of the first day of each month in the relevant period, reduced by the amount of PLN 10,000,000. The tax is calculated as 0.035% of such tax base for each month. The tax amount may be deducted from the general income tax advance; therefore, if the fixed asset generates a certain level of income, the net effect of the amendment is tax neutral.

A statutory pre-emption right for the State Treasury has been established with respect to any land under inland standing water, regardless of the surface area of the water or the land. Thus, any transaction involving the sale of real estate where inland standing water is located can only be effective if the relevant head of a county (Polish: Starosta) liaising with the minister responsible for water management does not exercise his pre-emption right, which must be exercised within one month from the date of receipt by the head of a relevant county of the notification of the agreement.

"Standing water" is defined as "inland water in lakes and other natural bodies of water not directly and naturally connected with flowing inland surface water." It appears (on the basis of recent case law) that the pre-emption right may also apply to land on which ditches are located, which significantly broadens its application.

The Constitutional Court of the Slovak Republic has recently addressed the question of the bona fide acquisition of real estate.

The issue, which had been subject of legal debate in Slovakia for a long time, is whether the law should protect the ownership title of person "C" who acquired real estate from a person "B" after it was proved that person "B" did not acquire the real estate from person "A" in accordance with the law. In other words, the question is whether the good faith of a bona fide acquirer should prevail over another key legal principle, nemo plus iuris ad alium transfere potest quam ipse habet (no one can transfer to another more rights than he himself has).

The Constitutional Court considered both principles (bona fide acquisition and nemo plus iuris) to be equal. It further held that in the event of their conflict, the particular circumstances of each case should be taken into account in order to achieve a fair outcome. However, the Constitutional Court added that the legal risk (of not having ownership title and related consequences) should primarily be borne by the negligent original owner (i.e., person A in the above example), rather than by the bona fide acquirer (i.e., person C in the above example) who has no knowledge of the legal grounds under which the previous owner (A) was deprived of the ownership and deregistered as owner from the cadastral register. In short, the Constitutional Court reinforced the protection afforded to bona fide acquirers.

The challenging climate faced by UK retailers has led to a recent increase in the number of UK companies turning to company voluntary arrangements (CVAs) and it is predicted that this trend will continue in 2018.

CVAs are a compromise or arrangement between a company and its creditors which can be used by UK companies who hold significant numbers of leasehold interests to impose improved lease terms on landlords where unsecured creditors generally are supportive of the relevant proposal. In the current market, this makes them particularly attractive to bricks and mortar retailers, as well as to casual dining brands that have over-expanded. As such, CVAs have been proposed and approved in several high profile cases in recent months, and that trend only seems set to continue. CVAs are voted on and, if approved by a majority in number and 75% in value of the creditors voting at a creditor’s meeting considering the CVA, will bind all unsecured creditors of the company (though not secured creditors who do not consent).

Whilst a CVA is a tool for imposing altered lease terms on landlords to the benefit of tenants, they often receive support from landlords as well as other unsecured creditors as they typically result in a significantly greater return than the alternative of an administration or liquidation of the tenant.

In light of the predicted increase in CVAs, it is important for lenders, landlords and tenants to consider how a CVA will impact upon, or be treated under, their financing arrangements. Lenders should seek to ensure that it is clear that their borrower (whether a landlord or a tenant) is required to seek consent in order to propose or vote (as applicable) in a CVA so that the lender is made aware of the changes proposed to the underlying leasehold arrangements. As there are often very short notice periods associated with CVAs (there is a prescribed statutory minimum notice period of seven days for physical creditor meetings and 14 days where any other decision making procedure is being used), landlords should consider whether their financing arrangements allow them the flexibility to vote in CVAs on short notice without the need for a potentially lengthy wait for lender consent. Finally, whilst CVAs are focused on changes to the terms of their leases, tenant companies will need to ensure that proposing a CVA will not result in a breach of their financing agreements and in particular, any restrictions on negotiations with creditors, by virtue of entering into a CVA.