This update briefly summarizes 2019 trends in patent litigation from the Northern District of California, which remains an important and frequent venue for technology litigation.

Meanwhile, patent plaintiffs are still initiating cases in the Northern District of California.  As shown above, the District was one of the top five venues for new cases—as it was in 2010 and 2015.  New patent filings in the District declined from 2018 (326 cases) to 2019 (240 cases), but in 2020 they are already on pace to exceed last year’s total. 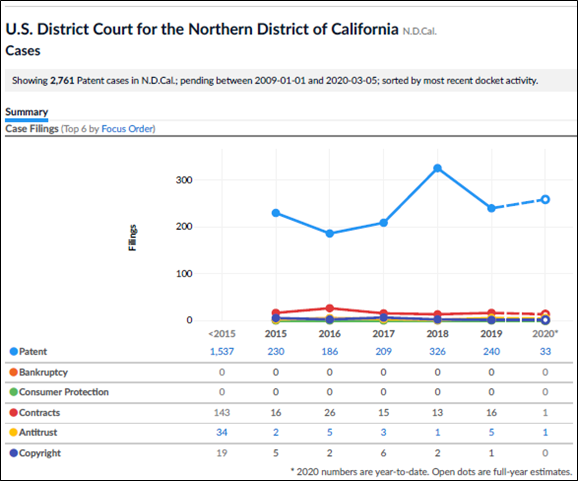 The Northern District of California continues to distribute cases relatively evenly among its judges, with no individual judge receiving more than 22 of the 240 new filings in 2019.  This contrasts with other districts where distribution of cases is more concentrated among certain judges (such as Judge Albright in W.D. Tex. or Judge Gilstrap in E.D. Tex.).  None of the ten judges with the most new patent cases in 2019 serves in the Northern District of California.  This relative distribution of filings will continue to affect strategies for venue and transfer.

While not as fast as some patent-heavy districts, the Northern District of California has been resolving cases and reaching key milestones over the past decade about as quickly as national averages.  For cases terminated between 2010 and 2019, the District’s median times to certain milestones are comparable to those nationwide:

In 2019, the District continued its trend of granting most motions to stay pending inter partes review (IPR).  According to Docket Navigator, nine of 13 such motions were granted, with one ruling deferred.  This is consistent with its overall practice since 2013, where the majority of stay motions are granted.

As to damages, total awards in the Northern District of California declined from roughly US$43.5 million in 2018 (across 30 cases) to about US$13.0 million in 2019 (across 14 cases).  Given the relatively small number of awards, and the delay between filing and any award, it is hard to draw conclusions about the District’s propensity for granting damages.  The annual increases in new cases since 2016 could lead to greater numbers of upcoming awards.  The District’s most recent Patent Local Rules also require disclosure of damages contentions, in addition to typical infringement and invalidity disclosures.

Any views expressed in this publication are strictly those of the authors and should not be attributed in any way to White & Case LLP.