Like the rest of the world, air passenger transport in the Russian Federation and other Commonwealth of Independent States (CIS) countries experienced a serious impact at the start of the COVID-19 pandemic. Yet air traffic appears to be recovering more rapidly in Russia and CIS nations than elsewhere. At the end of 2020, Russia had the majority of its aircraft fleets in service—a higher percentage than any other European nation.

In November 2020, survey respondents based primarily in Russia and CIS nations confirmed this trend, with statements of strong confidence and expectations that local aviation markets will return to growth.

In fact, Russia and CIS countries present opportunities to place aircraft at a time when airlines in other regions are filing for bankruptcy, seeking business rehabilitation protections, returning aircraft to lessors and lenders, and downsizing fleets. At the same time, it can seem daunting to plan an aviation finance transaction involving these jurisdictions, in light of sanctions imposed by the United States, the European Union and other countries, financial institution restrictions and compliance risk analysis factors.

To navigate international restrictions on transactions in Russia and CIS countries, your aviation deal must take appropriate precautions, follow a careful analysis and implement necessary contractual provisions. Here's how to start.

SOURCES OF OPTIMISM: AVIATION IN RUSSIA AND CIS NATIONS

Even before the COVID-19 pandemic cratered the world's aviation markets, industry analysts expected air transport in Russia and CIS nations to begin growing significantly over the next decades, resulting in market opportunities for global lessors, operators, manufacturers and others.

In 2018, the International Air Transport Association (IATA) had forecast that air traffic in Russia would increase by 76 percent, while adding another 58.8 million passenger journeys through 2037.1  2019 estimates showed the Russian air transport market could expand to more than 159 million passengers by 2037, with Kazakhstan, Uzbekistan, Ukraine, Kyrgyzstan and other CIS aviation markets similarly outstripping annual industry growth averages.2

Under pre-pandemic circumstances, IATA similarly expected Kazakhstan's air transport market to climb from tenth-largest to sixth-largest among emerging European markets, with Ukraine experiencing more than 38 percent growth rates and rising to fifth-largest by 2038.3 And this was before COVID-19 severely truncated global air travel.

Air traffic is recovering relatively quickly in Russia and CIS nations, particularly compared to other aviation markets. In fact, Russia appears to be the first major domestic air travel market to recover and even exceed its pre-pandemic air traffic volume.4

By the end of summer 2020, Russia had slightly outpaced its 2019 domestic travel levels, driven by a large domestic base of customers, spread over a vast landmass, with few opportunities to travel outside their country.5  Domestic revenue passenger kilometers (RPKs) of Russian airlines increased in year-on-year terms during autumn 2020, spurred by fare discounts and few travel restrictions within Russia.6  And by the end of 2020, Russia had the majority of its aircraft fleets in service—a higher percentage than any other European nation.

This competitive strength, combined with a domestic aviation market well positioned to lead local carriers, operators and other market players through a post-crisis recovery, might help cement an enduring advantage.7

Several reasons may explain the rapid aviation rebound in Russia and CIS countries.

For starters, the sheer size of Russia and Kazakhstan makes most other modes of transportation (such as train or automobile) impractical for travel between main cities and business hubs. Perhaps a less anxious (or more fatalistic) local culture causes people to be less concerned about traveling during a pandemic. Regardless, domestic air traffic in the region has resumed for work, other essential reasons and pleasure—even after experiencing strong growth in recent years.

In addition to hosting an expanding aviation industry, which rebounded quickly from the pandemic, Russia and CIS countries have invested in upgrading their airport terminal infrastructure while increasingly preparing to function as transport links between East and West.

In January 2020, Moscow's Sheremetyevo International Airport opened the first phase of its new high-technology Terminal C, as part of its strategic goal to serve 100 million passengers per year by 2030.

Already one of Europe's top-ten busiest airports (with 49.9 million passengers in 2019), Sheremetyevo is Russia's largest airport and poised to strengthen its position as a key air transportation hub.8 Kazakhstan plans to continue growing Almaty Airport as a transit hub connecting Europe and Asia.9 Azerbaijan is permitting foreign carriers greater use of its airports, opening landing rights and offering discounts to visiting airlines as part of an effort to become another notable transport and logistics hub between Asia and Europe.10 Several other major air transport hubs in the region are growing as well.

A survey of several hundred international aviation participants, based primarily in Russia and CIS countries, at the November 2020 "Wings of the Future" conference produced strikingly enthusiastic perspectives on current global aviation markets.

This confidence in rapid recovery is less surprising in light of the fact that regional air traffic in Russia has largely resumed and that the Russian public appears to demonstrate limited anxiety about travel during a pandemic. In addition, the range of answers to the fourth question shows that organizations can deploy a number of different approaches, with no particular option serving as a silver bullet for all groups.

For example, some operators may have the ability to adjust their fleets, whereas other carriers focused on regional flights or that have Russian provinces as majority shareholders might expect to rely more on subsidies and state support. Many airlines in the region are experimenting creatively with how they use their fleets and how to adjust to the current, unprecedented situation, including by testing changes to their business models, such as becoming more point-to-point carriers focused on domestic activity, or transitioning to new aircraft better suited to flying these routes. 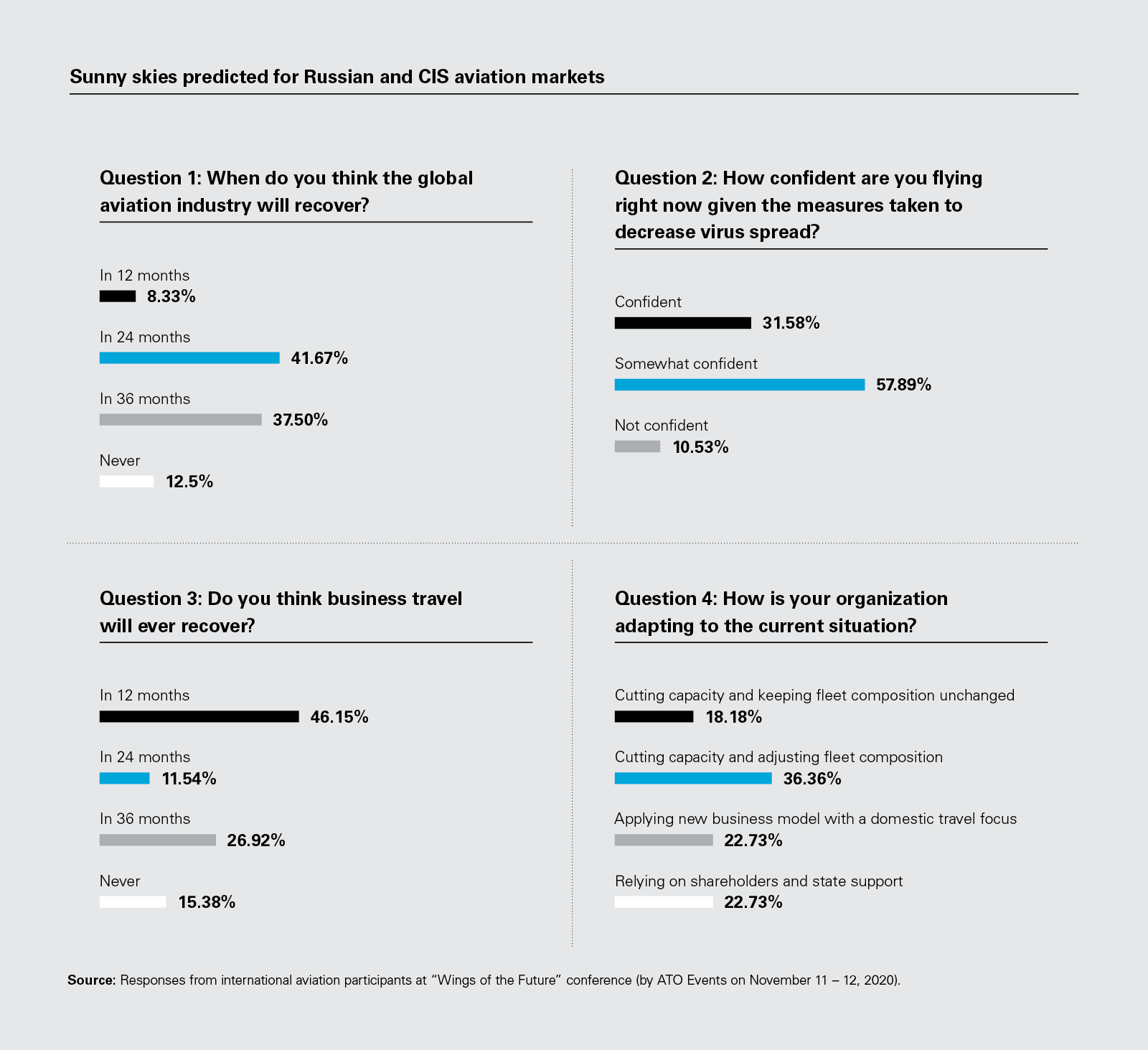 In most regions around the world, the COVID-19 pandemic has led airlines to file for bankruptcy, seek business rehabilitation protections, return aircraft to lessors and lenders, reject aircraft deliveries and downsize aircraft fleets to reduce costs. For lessors and lenders, this can mean assuming the burden of possessing aircraft and paying significant expenses to maintain, insure and store their aircraft at a time when those aircraft are not generating revenue.

Yet in Russia and CIS countries, the combination of relatively strong air traffic and aviation fleets ready for renewal could provide opportunities for global industry participants that understand how to navigate these markets.

The current crisis could encourage lessors, lenders and others who previously were reluctant to do business in Russia and CIS countries to reassess this region, particularly with other markets effectively closed to new business and a surplus of unused aircraft grounded throughout markets in the West and Asia.

A 2018 Airbus global market analysis forecast that Russian and CIS airlines would require 1,220 new-generation fuel-efficient aircraft valued at US$175 billion, thus approximately doubling the region's passenger fleets during the period from 2018 through 2037, while gradually phasing out their older aircraft models.11 Indeed, Russia's largest airline group, Aeroflot, and the national airlines in Uzbekistan, Belarus, Kazakhstan are in the process of replacing aging aircraft in order to increase their market share and rejuvenate their fleets.12

With huge excess capacity worldwide and shrinking demand, more lessors and lenders may look to take advantage of Russia and the CIS as an opportunity to place their aircraft.

In 2011, Russia ratified the Cape Town Convention on International Interests in Mobile Equipment, including its protocol on aviation equipment—an international treaty whose participating nations follow a unified process for repossessing aircraft in all signatory jurisdictions. By signing and ratifying the Cape Town Convention, Russia has agreed to facilitate a speedy process allowing international lenders and lessors to recover aircraft from Russia if a particular operator becomes insolvent or defaults on its obligations.

Since Russia ranks fairly high in terms of compliance with the Cape Town Convention and has been a contracting state for several years, international lessors and lenders may take some comfort that Russia will protect and recognize their ownership and security interests in their aircraft.

Plan around the pitfalls

Although Russia and CIS countries present aviation opportunities, these jurisdictions can also raise red flags with internal corporate compliance teams. International sanctions imposed by the US, the EU and other countries against specific actors can risk significant penalties and complicate the process of doing business. Similarly, Know Your Client (KYC) restrictions at financial institutions may appear to block all aviation finance transactions involving Russia and CIS countries as too "high risk" and not worth attempting. However, with effective legal guidance, one can generally operate safely.

Some European and Chinese lessors have successfully leased aircraft into Russia. Using these and other examples can help present a business case to internal compliance teams. In addition, pairing aviation industry experience with an in-depth understanding of sanctions details can overcome complex compliance issues.

When structuring transactions with Russian lessees, lessors should address the following issues:

In addition, pay attention to particular features related to repossessing aircraft in case of the bankruptcy of a Russian lessee, including circumstances that can affect a lessor's rights, such as: challenging the lessee's payments under lease agreements (as transactions contemplating unequal consideration); transactions concluded with the intent to impair creditors' interests; transactions entailing preferential treatment of certain creditors (over other creditors); refusal to perform obligations under agreements with the lessor by a receiver or external manager of the lessee; or claw-backs of particular settlement operations (payments, set-offs, etc.) under agreements with the lessor.

Finally, although Russia complies with the Cape Town Convention, certain practical specifics apply to the repossession process in Russia in light of the Cape Town Convention and the Aircraft Protocol, and Russia's declarations made under the provisions of these treaties. The issues to watch for include liens and rights of detention in favor of third parties (tax and customs authorities, airports, repairers, etc.) and the need to obtain a court decision, other permits (such as flight permits and completion of customs formalities) and physical access to aircraft at an airport in Russia in order to repossess and export aircraft.

A growing market is available for those who follow the right precautionary measures and pay attention to all local issues.