Beginning of an era of Turkish bank capital securities

As the Basel III requirements continue to take effect, Turkish banks find themselves under increased pressure to boost their capital and grow their balance sheets

Managing a bank in Turkey with unstable currency, inflationary pressures, occasional downgrades of the sovereign debt from major rating agencies to junk status, and immense competition for profitability, deposits, loans and capital presents significant challenges. The Turkish banking industry is characterized by various evolutionary stages, including a generous growth period from 2003 to 2013, followed by a maturity period from 2014 onwards. At present, Turkish banks are required to use their capital very cautiously as "every penny counts" on the cost of capital and return on equity. On the other hand, a hunt for yield continues among investors who are desperate for decent returns. Owing to these components, we may be looking at a future where investors and Turkish banks meet at reasonable yields, bringing in a new era of Turkish capital securities.

Basel III explained: Why and how did it begin?

In the aftermath of the global financial crisis of 2008, the Basel Committee on Banking Supervision (BCBC) published an internationally agreed-upon set of minimum requirements in December 2010, which apply to internationally active banks. One of the main underlying causes of the global crisis was the lack of strict regulation, supervision and risk management of banks. Therefore, the BCBC aimed to address this issue by strengthening the existing capital standards and introducing, among other measures, new requirements for "internationally active banks," the usual suspects of the 2008 crisis. These requirements are collectively known as "Basel III."

In line with the EU and US approach, the Turkish Banking Regulation and Supervision Agency (the BRSA) implemented the Basel III framework in respect of the regulatory capital requirements with the Equity Regulation issued by the BRSA, published in the Official Gazette dated September 5, 2013, effective as of January 1, 2014 (the "Equity Regulation").

The Basel III framework strengthened the existing Basel II framework and introduced new capital and liquidity requirements for banks. A bank's capital consists of three main capital items, namely, (i) the common equity Tier I capital (CET 1); (ii) additional Tier I capital (AT1); and (iii) Tier II capital (Tier 2). The Basel III framework also introduced capital buffers as macroprudential tools to preserve the CET 1 of a bank, namely (i) capital conservation buffer (applied to all banks and at all times); (ii) countercyclical capital buffer (applied to all banks in times of excessive credit growth); and (iii) systemic buffers (i.e., the higher of Systemic Risk, G-SII and O-SII Buffers) for systemically important banks (SIBs). 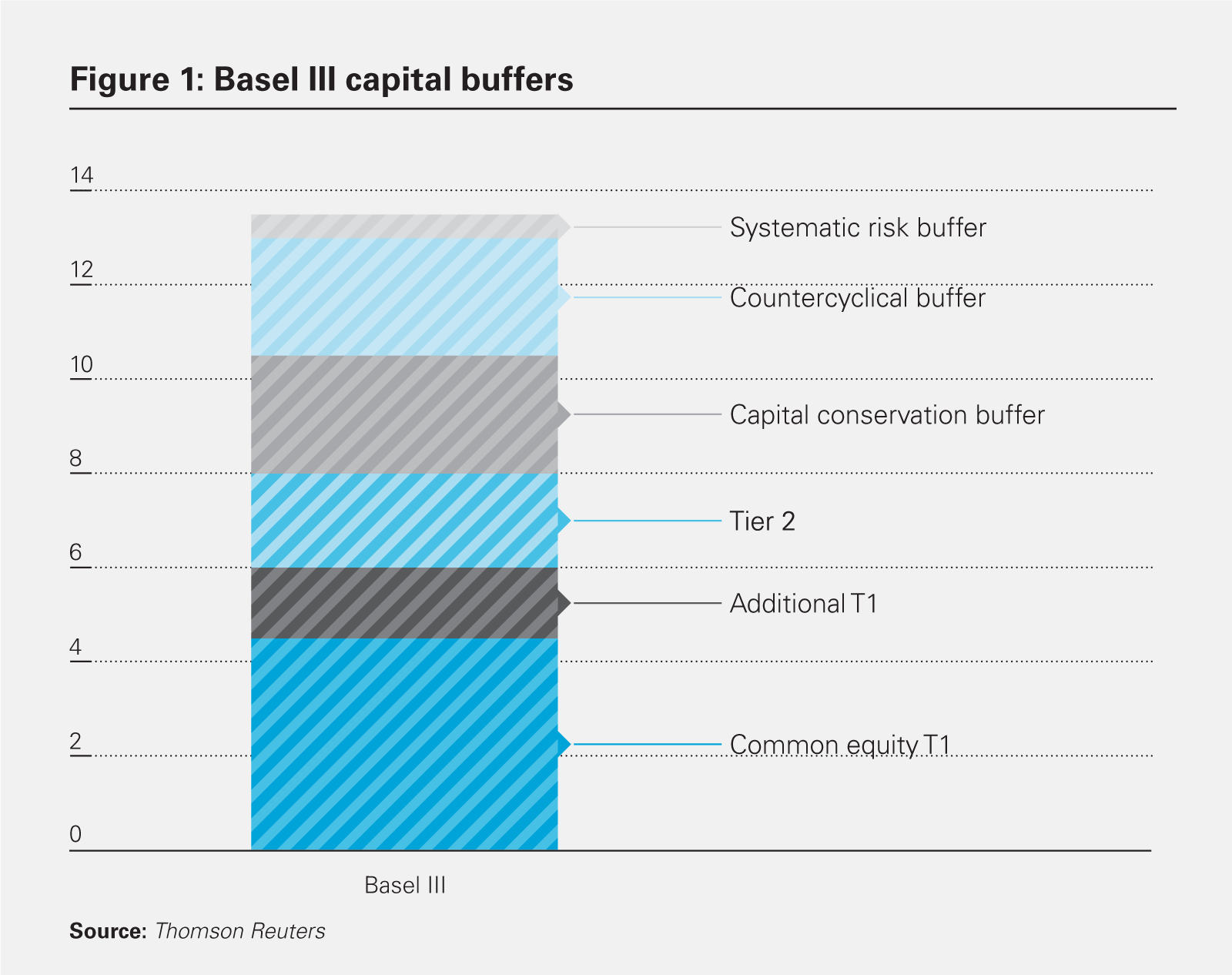 Banks must maintain these minimum levels of capital calculated by reference to their risk-weighted assets, which in turn constitute the capital adequacy ratio (CAR). In line with the Basel III framework, the Turkish regulator requires the minimum level of (i) CET 1 to be 4.5 percent; (ii) CET 1, together with AT1 to be 6.0 percent; and (iii) CET 1, together with AT1 and Tier 2 to be 8.0 percent. In addition, further CET 1 buffers, namely, (i) the capital conservation buffer set at 1.75 percent for 2018 and increasing to 2.5 percent for the year 2019; (ii) the countercyclical capital buffer (which can vary between 0 percent and 2.5 percent, and the BRSA applies 0 percent since January 2016); and (iii) the systemic risk buffer, being 2.25 percent for the systemically important banks that it classifies in Group IV, 1.5 percent for Group III, 1.125 percent for Group II, and 0.75 percent for Group I, increasing in 2019 to, respectively, 3.0 percent, 2.0 percent, 1.5 percent, and 1.0 percent. In addition, although the Turkish Banking Law sets the CAR as 8.0 percent, it entitles the BRSA to set a higher targeted capital adequacy ratio, which the BRSA has set at 12.0 percent, pursuant to a decision in November 2006.

Turkish banks explained: Do they have adequate resilience?

Since 2008, Turkish banks have been as resilient as their EU counterparts in terms of average CARs. A Fitch paper in August 2017 noted that Turkish "banks are mostly reasonably well capitalized, helped by recent profit growth, Tier 2 capital issuance, lower capital requirements for lending covered by the CGF and regulatory forbearance on risk-weightings for foreign-currency reserves." Figure 2 indicates the average CAR of Turkish benchmark issuers1 compared to EU benchmark issuers2 and other emerging market benchmark issuers3. 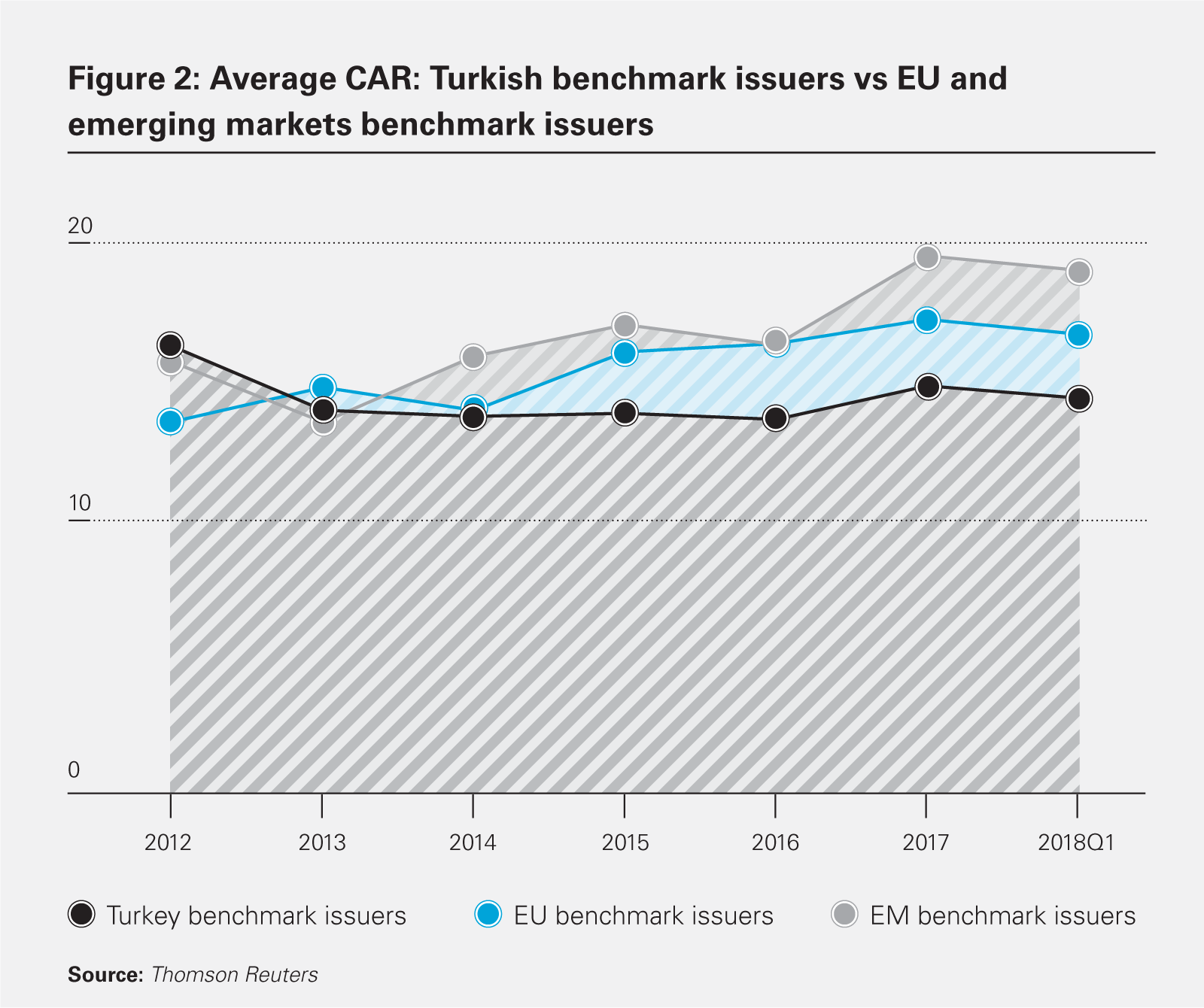 AT1 and Tier II bonds explained: Basics of capital securities 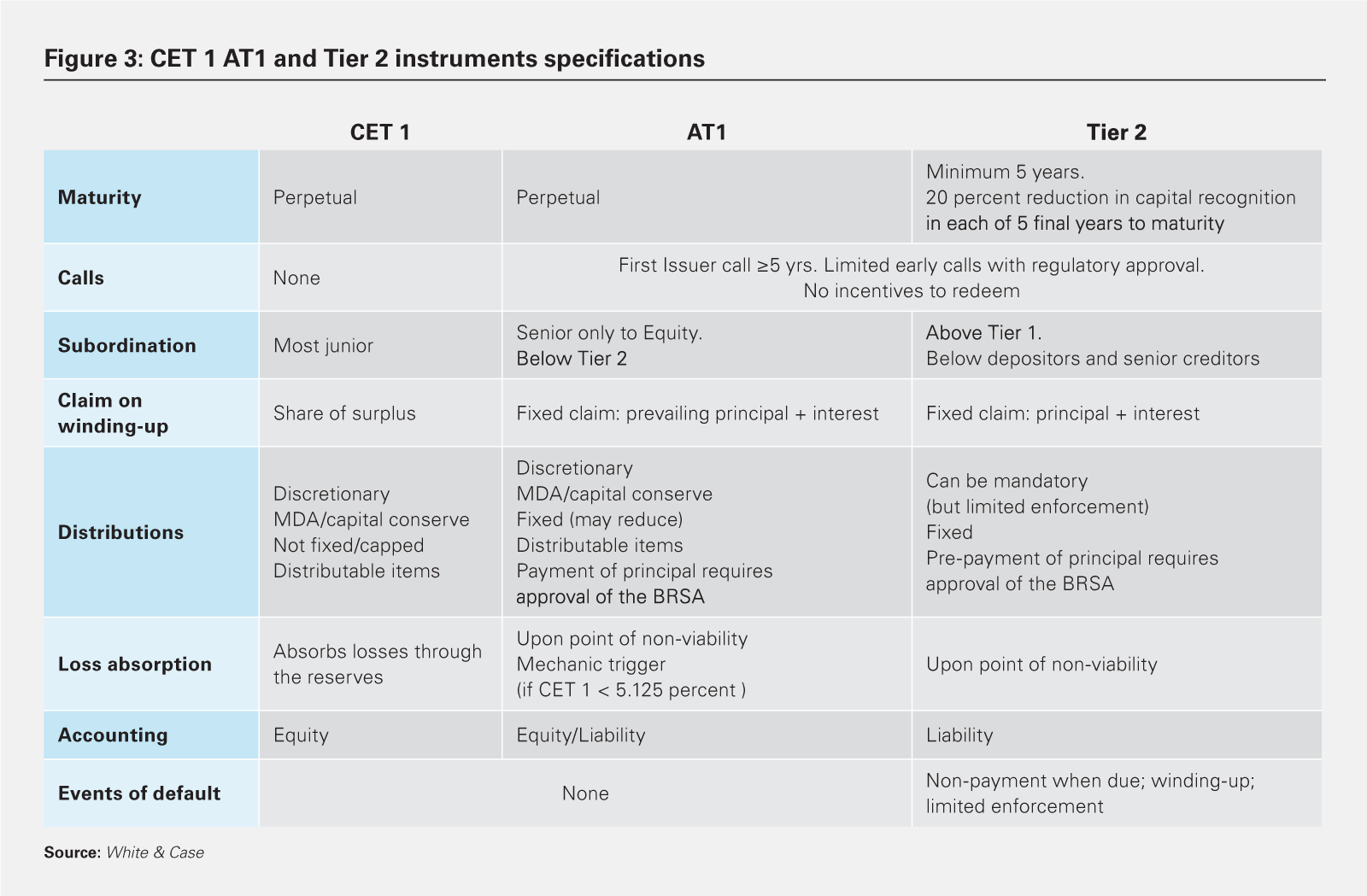 Terms and conditions of AT1 and Tier 2 bonds must include mandatory loss absorption mechanics:

A well-established Turkish Tier 2 bond practice: From 2015 to today

With the entry into force of the Equity Regulation in January 2014, the BRSA paved the way for the issuance of bank capital securities. However, given that the Turkish commercial banks, as well as potential investors, were not very familiar with these instruments in a Turkish context and the regulatory framework was untested (although TEB had issued subordinated bonds back in 2012 and Albaraka had issued a Tier 2 sukuk in 2013), the first Basel III-compliant Tier 2 issuance by a Turkish commercial bank was only made possible in February 2015 by Vakıfbank, a state-owned bank. As a first-mover encouraged by the BRSA, Vakıfbank placed US$500 million fixed rate resettable Tier 2 bonds with a ten-year maturity, and the deal was priced at a yield of 6.95 percent, with a coupon of 6.875 percent, paying approximately 115 bps more than its counterparts.

Following in Vakıfbank's footsteps, 11 Turkish banks issued Tier 2 bonds with a combined issuance of approximately US$5.4 billion, all of them being fixed rate resettable issuances with ten to 11-year maturity periods. Among these issuances, there were two Basel III Tier 2 sukuk (Shari'ah-compliant bond) issuances by two Turkish participation banks, primarily subscribed by investors in the Middle East and North Africa (MENA) and Gulf Cooperation Council (GCC) regions. 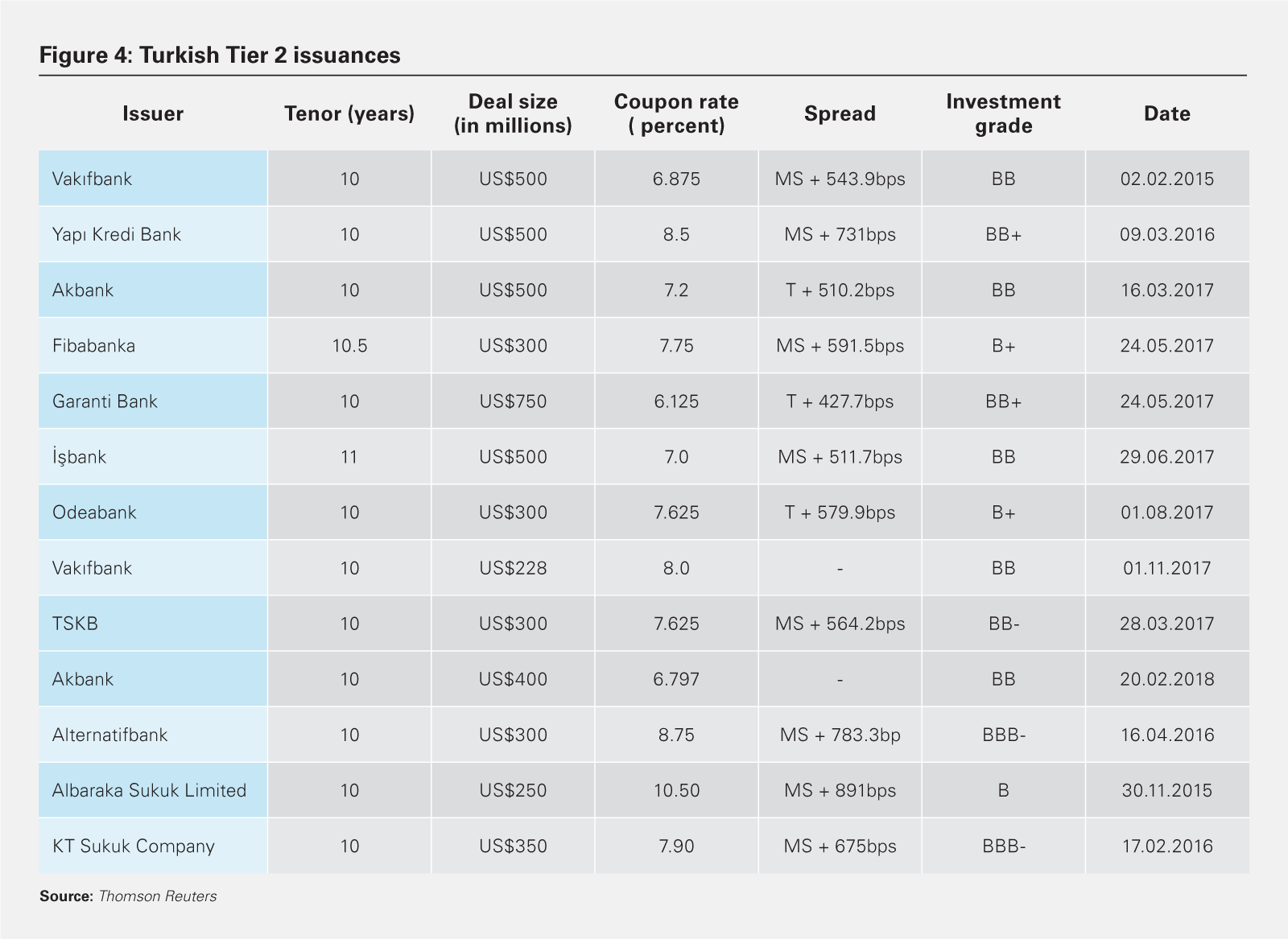 As a result of the initiatives to boost Tier 2 capital issuances, the Turkish average Tier 2 ratio rose to 2.4 percent in the first-quarter of 2018 compared to 1.91 percent in 2013, just before the implementation of the Basel III framework. This figure is approximately 0.6 percent lower than the EU benchmark issuers' average Tier 2 ratio in the first-quarter of 2018, which is 3.1 percent. Figure 5 indicates the average Tier 2 capital of the benchmark Turkish banks compared to EU benchmark issuers4. 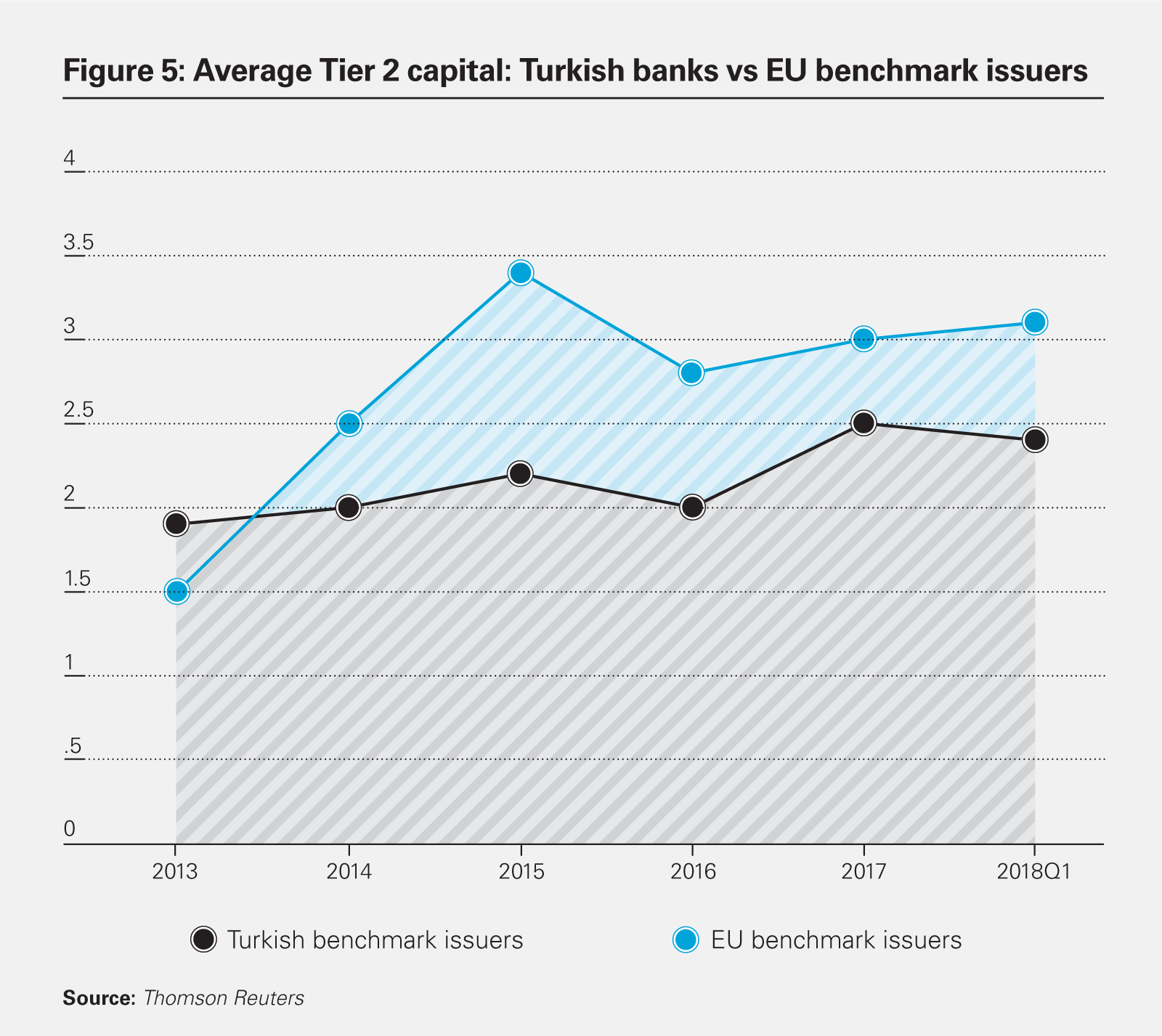 Potential need for AT1 capital: Will there be a future for AT1 bond issuances? 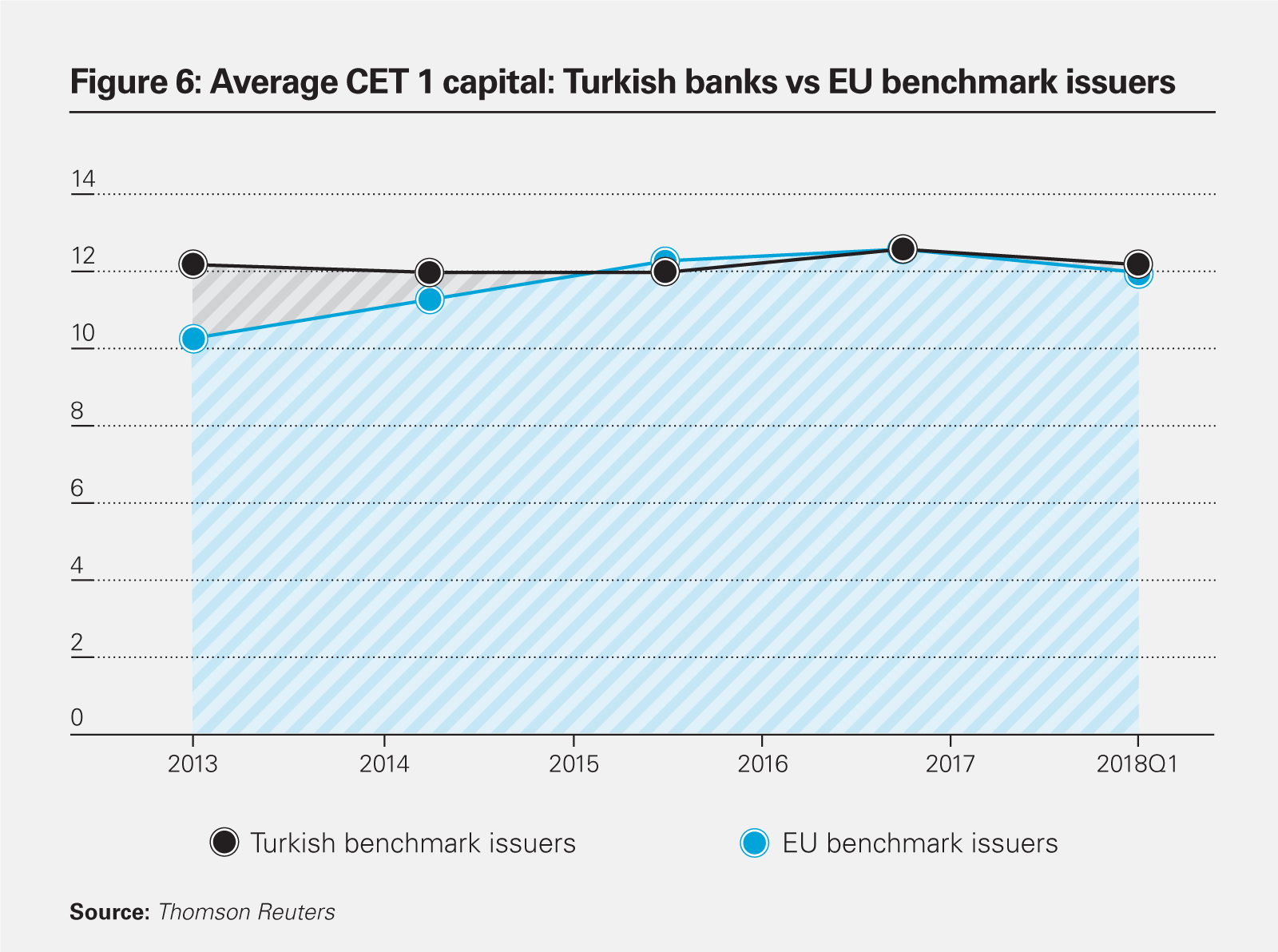 According to 2018 first-quarter financial statements, the Turkish benchmark issuers had either negligible or no AT1 capital. In contrast to the Turkish banks, the EU benchmark issuers had on average approximately 1.85 percent of AT1 capital according to 2018 first-quarter financial statements.

The gradual (and somewhat consistent) relative decrease in Turkish banks' CARs will trigger a boosting requirement at some point to prevent the "dangerous" level that is close to the BRSA’s CAR threshold from being breached and also for the Turkish banks to compete with their European peers. In particular, some banks may be closer to the "danger levels" than others. Given that further rights issuances (which is the plain vanilla form of CET 1 capital) have significant costs for the shareholders and that their Turkish lira-denominated nature does not allow them to mitigate the increasing weight that the FX-denominated assets of the Turkish banks have on their balance sheet, and given that most of the Turkish banks have already benefited from Tier 2 issuances to boost their CAR (as the average Tier 2 capital level of the Turkish benchmark issuers is already above 2.5 percent), we believe that the most convenient (and efficient) method for the Turkish banks to increase their CAR may be to target the capital markets with AT1 bond issuances, and potentially reach the same levels of AT1 capital as their European peers.

Regulatory roadblocks: Will there be a future for convertible issuances?

Although capital securities may be issued on a write-down or convertible basis, all Tier 2 bonds have been structured on the basis of a write-down at the point of non-viability. The lack of (or issuers' reluctance relating to) the issuance of convertible capital securities can be tied to certain regulatory uncertainties with respect to both the capital markets regulatory framework (regulated by the Capital Markets Board (the CMB)) and the banking regulatory framework (regulated by the BRSA). In particular, the Turkish regulations lack detailed provisions relating to convertible debt instruments (especially with respect to conversion mechanics), which are excluded from the application of the CMB’s Communiqué on Debt Instruments (VII-128.8) if issued by a bank, following an amendment in 2017. These regulatory uncertainties cause legal and practical "roadblocks" and should be addressed by the regulators to diversify capital instruments.

Notably and recently, on June 7, 2018, the BRSA published the Communiqué on Debt Instruments to be included in the Equity Calculation of the Banks (the "Communiqué"), a regulation setting out the rules and procedures for de-registration, write-down or conversion into equity of capital securities. Highlights from the Communiqué include the following:

In addition to the regulatory roadblocks, the "first-mover disadvantage" for the issuers of such capital instruments cannot be ignored as currently, except for one particular domestic issuance in January 2018 by a real estate investment partnership, the corporate convertible bond market in Turkey is a blank canvas waiting to be painted by eager issuers.