Building a sustainable battery supply chain: Is blockchain the solution?

Supply chains are inherently complex. They lack interoperability and are plagued by inconsistent or unavailable data.

The electric vehicle (EV) has arrived. With it comes a vast opportunity, but also a major challenge: how to build an ethical and sustainable supply chain—a necessity driven by the consumer rather than the regulator. The world's biggest automakers are rising to the challenge and are rushing to develop new models. Some market forecasts expect that by 2040, more than half of all auto sales will be electric: an incredible level of penetration from just 1 per cent in 2017. 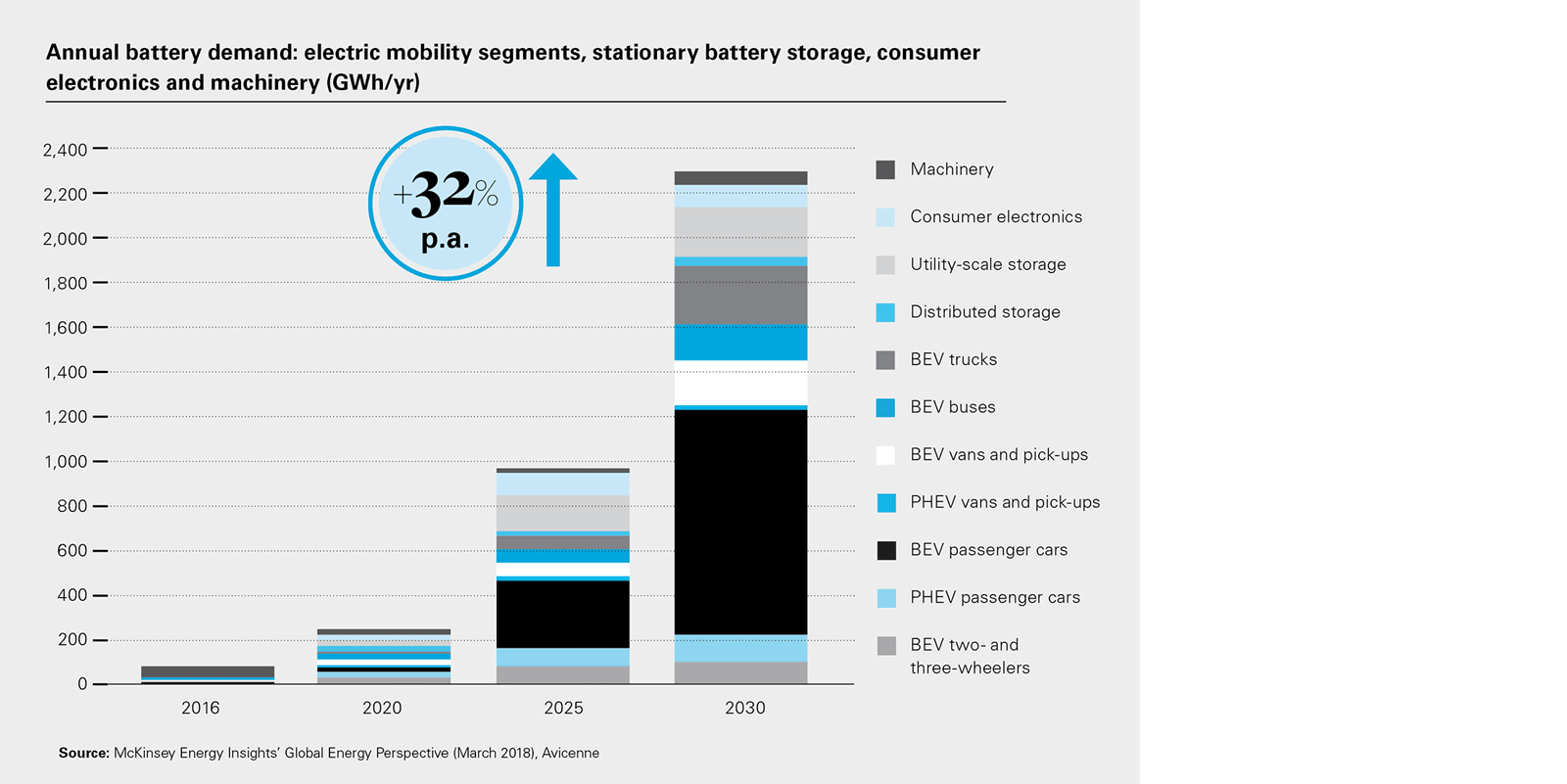 This new breed of autos, and the batteries that power them, will need an array of metals, including cobalt and lithium, which—until recently—were niche markets. Securing the supply of these metals is one of the major obstacles to progress, and ensuring they are sustainably sourced is an even bigger challenge.

Currently, the lithium-ion battery is the dominant power source for the EV revolution and it is forecast to remain that way for at least the next decade. The Nickel-Manganese-Cobalt (NMC) combination has been favoured by almost all battery makers because of its long-lasting charge—an essential requirement if the EV is going to consign the internal combustion engine to history. Although immense efforts have been made to reduce the use of cobalt, there is a limit as to how far this thrift can go, as the reduction in the ratio of cobalt leads to a less stable battery. As such cobalt will remain an essential ingredient until R&D departments can find an alternative.

Cobalt is the most geologically scarce of the battery raw materials. It is also the most geographically challenged in terms of economically viable deposits: More than 50 per cent of global reserves are found in the Democratic Republic of Congo (DRC)—a country plagued by political instability.

Reliance on a commodity that comes from a country that faces allegations of child labour in mining poses serious challenges for battery and vehicle manufacturers. Securing supply and ensuring any supply meets the sustainability demands of customers, who want to know that extraction has met environmental and social standards, are at the heart of the difficulties of building a sustainable and ethical supply chain.

The first challenge facing the world's battery and automakers is the scarcity of cobalt. Prices have risen more than threefold in just two years, giving rise to panic in manufacturers whose new products are useless without it.

The big German automakers such as BMW and Volkswagen have been aggressively seeking secure, long-term cobalt supply. Apple, while not an EV maker, sees the supplies it needs being disrupted by the auto industry. Apple has reportedly reacted to this by holding talks with miners directly about securing offtake, cutting out the long supply chain it has traditionally depended on. Furthermore, Apple's latest supply chain responsibility report explicitly highlights its focus on ethical supply: The company maps all its cobalt supplies to ensure they meet the standards set by the Organisation for Economic Co-operation and Development (OECD).

Tracking cobalt presents many challenges, as scores of informal mine sites would have to be monitored, every player in the supply chain would need to buy into the scheme, and accurate, electronic data would need to be transmitted from remote areas. Ultimately, it is essential to get all the major participants and stakeholders involved—not just the corporates, but also countries. China has so far been the most successful in securing supply, with more than half the world's supply being refined there. China is the world's biggest EV market, with more than 100 domestically developed cars featured at the Beijing auto show in 2017. Moreover, in the first quarter of 2018, GEM Co. secured an agreement to buy about a third of Glencore's cobalt output over the next three years. China Molybdenum, the world's number two miner of cobalt, bolstered its supply further by acquiring a major mine in the DRC in 2016.

While automakers have so far broadly struggled to secure cobalt offtake agreements (where miners have the upper hand and are unwilling to lock in prices in a rising market), lithium has been a different story. Here miners are looking for development capital and are therefore more open to deals. In attracting potential investment, proactive use of blockchain has the potential to benefit these miners through demonstrating compliance with best practice from a sustainability and environmental perspective. Blockchain allows for the permanent and immutable transparent recording of data, enabling a precise audit process, i.e., the raw materials are given a digital fingerprint that is then tracked, enabling mapping in terms of sustainability, environmental and ethical compliance.

With about 15 per cent of cobalt mined through artisanal mining, the second biggest challenge for cobalt supplies is reputational risk. Allegations of child labour, environmental destruction and unsafe working conditions have all led to both manufacturers and consumers being wary of minerals produced this way. History shows that regulators are often too slow to combat challenges such as this, and given the pace of demand growth and the high levels of consumer awareness, companies are increasingly taking the lead.

Yet, while there are clear problems with artisanal mining, as pointed out by industry leaders such as Glencore, some believe it also offers real opportunities if done responsibly. Projects that can guarantee that deposits are mined in an ethical way benefit both host communities, by creating revenue and employment opportunities, and buyers, who gain additional supply. This is clearly an area which can benefit from the tracking opportunities offered by blockchain.

Given the limited life cycle of batteries, and the supply concerns for some of the materials used to make them, recycling is set to become a key issue, with important environmental concerns about how this process is managed.

Dominic Waughray, Head of the Centre for Global Public Goods at the World Economic Forum (WEF), says that both valuable raw materials and a billion-dollar business opportunities are going to waste: "All the electronic waste we discarded in 2014 was worth US$52 billion. It contained 300 tonnes of gold and significant amounts of silver and palladium. We keep a smartphone or tablet on average for just 26 months and then we throw it away, battery and all."

The recycling process is also likely to provide another opportunity for blockchain. The recycled materials can be tracked via a digital ledger and the next-phase users will be able to confirm that the raw materials were recycled in a responsible manner, a crucial element in proving to a consumer that they are buying a product that was both mined and recycled sustainably.

China has already announced that it will make EV producers responsible for the battery recycling process to ensure that it is carried out in an environmentally friendly way. In addition to setting up recycling pilots, China's government has been busy setting up the Responsible Cobalt Initiative (RCI), which aims to set standards for a clean supply chain, improving transparency and governance. While government sponsored, it shows how the industry is, in many ways, looking to self-regulate in an attempt to give consumers confidence in its products. So far, global companies including Apple, Sony and Mercedes-Benz have signed on to the RCI.

There are other initiatives too, such as the WEF's Global Battery Alliance, which aims to transform the entire supply chain into a responsible one.

A relevant example of the use of blockchain for an improved ethical supply chain is the pilot scheme started by diamond giant De Beers in January of this year to train and equip artisanal diamond miners in Sierra Leone before authenticating and buying their production. Should the scheme prove successful, it could solve multiple problems. Artisanal miners will have a route to market that will offer them better prices, while De Beers gains additional supply and consumers can have the confidence that the product they are buying is free from many of the negative connotations of small-scale mining. In May, De Beers announced it had successfully tracked its first diamonds from mine to store using blockchain technology called Tracr. The company plans to make the technology available to the entire diamond industry.

There are already moves afoot to replicate the De Beer's scheme in cobalt mining. RCS Global is leading a scheme called 'Better Cobalt'. Its cobalt pilot will monitor artisanal mines in the DRC against OECD sourcing standards by using blockchain technology to trace those supplies and ensure against supply chain contamination. Trafigura, one of the world's biggest commodity trading houses, has signed a deal to market about 5 per cent of global supply with much of that coming from artisanal supply from what the company calls 'controlled sites', eliminating many of the reputational risks.

Automakers are also starting to use blockchain. BMW, Ford, General Motors and Renault have recently founded the Mobility Open Blockchain Initiative (MOBI), which aims to apply blockchain technology across the sector to create common standards of use and to create a new digital mobility ecosystem. Although this initial step will focus on payments and data sharing, it is only a matter of time before blockchains permeate all aspects of the auto industry, including raw materials. If blueprints that are already in place can be replicated, this will happen sooner rather than later.

The use of blockchain technology may also become the norm through regulation. So far, most proposed or piloted blockchain schemes are being driven by companies or industry groups. Yet, as the technology advances and regulators tighten rules, there's an increasing likelihood that such monitoring technologies will become compulsory in the future. In the US, companies filing with the SEC must already demonstrate that they are not using conflict materials. In the EU, the new Conflict Minerals Regulation law will come into force in 2021, aiming to stop such minerals from entering the continent. By the time this law is enacted, blockchain is likely to be firmly entrenched in global supply chains, so utilisation by regulators and finance providers could be the next logical step.

Lenders or finance institutions may also come to rely on blockchain to demonstrate sustainability, which may be key to attracting another source of capital: 'green' finance. Investment is provided in exchange for the delivery of positive environmental benefits that are real, verified and additional to business as usual. London has been ranked as the best financial hub in the world for green financing offerings, with the Global Green Finance Index saying earlier this year that the market for green offers may grow substantially in size and quality in the coming years. Firms embracing blockchain to track their raw material supplies are likely to be best placed to secure capital from this growing pool.

Blockchain is a distributed, digital ledger which records digital data or events in a series of blocks, which are tamper-resistant. While the data may be accessed, inspected or added to, they cannot be changed or deleted. The original information stays put, leaving a permanent and public information trail, or chain, of transactions.

Blockchain may well be the technology that propels us into the next industrial revolution, with new paradigms for doing business in finance, supply chain, transportation, shared economy and many other industries.