Challenges remain: Geopolitics and regulations can be decisive

Despite the opportunities available in the market, the changing face of global politics is exerting an increasing influence over deals. Almost half of respondents (47 percent) point to trade wars and rising protectionism as one of the most significant geopolitical factors affecting acquisition strategies over the next 12 months. This is followed by US tensions with traditional allies (29 percent).

Meanwhile, nearly a quarter (24 percent) point to Brexit as an important factor. A CFO of a France-based cloud computing company says: "Brexit has affected our European M&A plans. Unless the environment becomes clear, we are not quite sure of finalizing any acquisition in Europe. We are instead looking for acquisitions in other regions where the growth and opportunities are better."

In addition, executives are feeling increasingly challenged by the regulatory environment in cross-border deals. Thirty-nine percent say that they were unsuccessful in this area and that there is significant room for improvement. 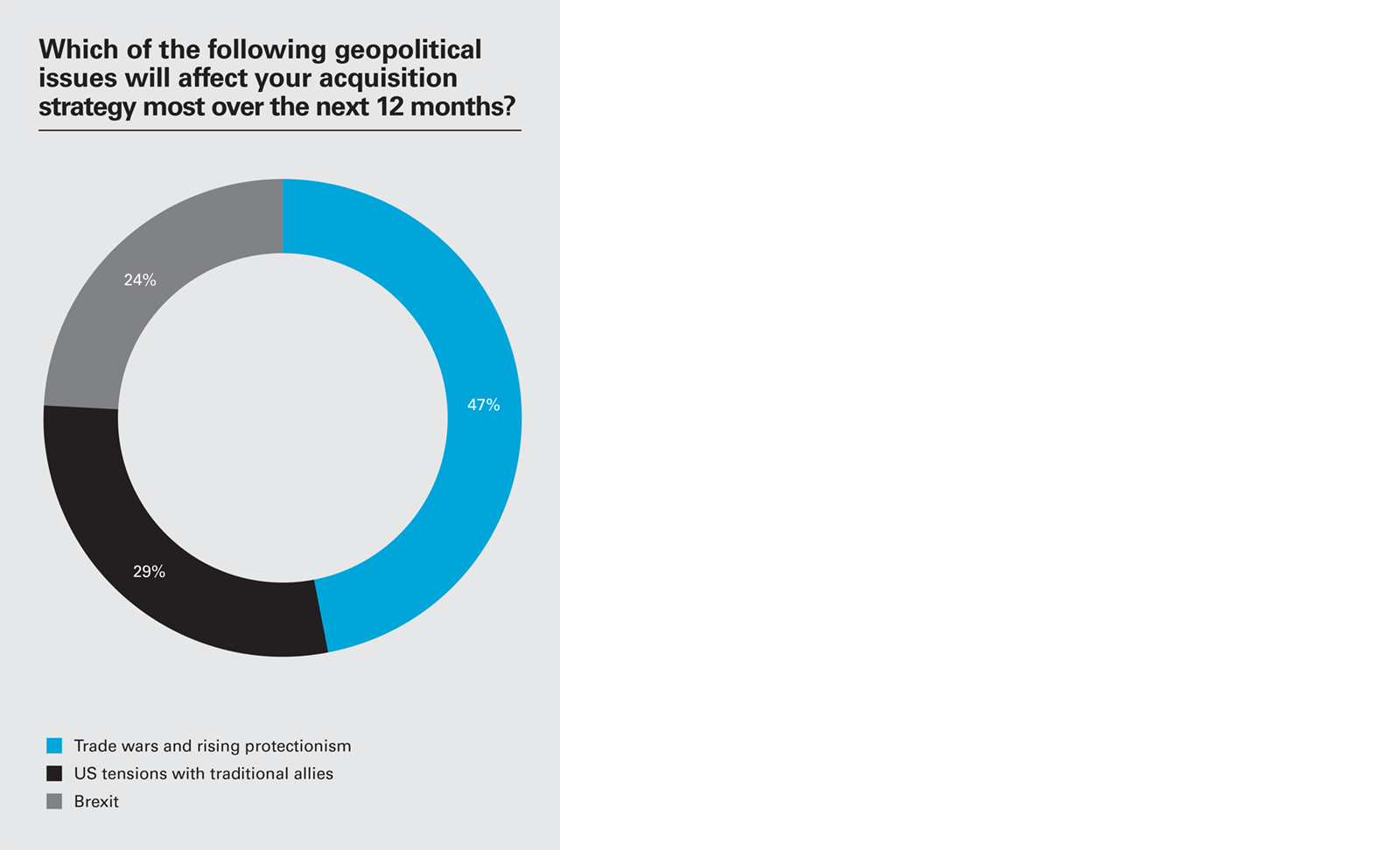 Too many rules spoil the deal?

When we examine the deal process itself, a majority of respondents noted that their biggest mistake was failing to study local market regulations sufficiently in advance. "There were an awful lot of procedures to follow," says one technology executive. "The biggest problem was identifying those procedures: foreign regulatory approval; reform commission; antitrust administration; national security authority; and many more. You need experienced advisers, otherwise it takes a very long time to get clearance."

And antitrust rules are tightening around the world. "With Trump as president and strict policies to restrict foreign companies, antitrust is now the most challenging regulatory hurdle," says the finance director of a UK-based cyber- security company.

Governments are also taking stronger approaches to reviewing deals for national security threats, particularly when they involve technology. The Committee on Foreign Investment in the United States (CFIUS), which scrutinizes foreign investments in the US, recently had its remit expanded. In August, the government introduced the Foreign Investment Risk Review Modernization Act (FIRMMA), which is widely seen as intended to curb Chinese influence. Among other things, FIRMMA extends the power of CFIUS to scrutinize deals involving sensitive personal data and critical technology.

"The USA is going overboard with its national security concerns," says the SVP of an India-based telecommunications company. "I fail to understand why they interpret every deal as a threat to their security. Even with those which have nothing to do with national security, they keep delaying approval."

The UK has also tightened merger scrutiny, giving the government greater powers to review cross- border tech deals. Meanwhile, momentum for stronger investment controls is building in Europe, both at the EU level and for individual states. Germany, for example, recently vetoed a high-tech manufacturing takeover.

While tougher rules on inbound investment in the West are primarily meant to rein in growing Chinese influence, they raise the regulatory bar for any cross-border acquirer of sensitive tech assets. Even foreign- to-foreign acquisitions can fall afoul of cross-border rules in third-party jurisdictions if the target has end- customers or relevant activities in that country.

"Since the change of leadership in the USA, we have seen a lot of policy changes creating an uncertain business environment. Making an acquisition in such an environment is a challenge we don't want to face at present," said the SVP of an India- based telecommunications firm. 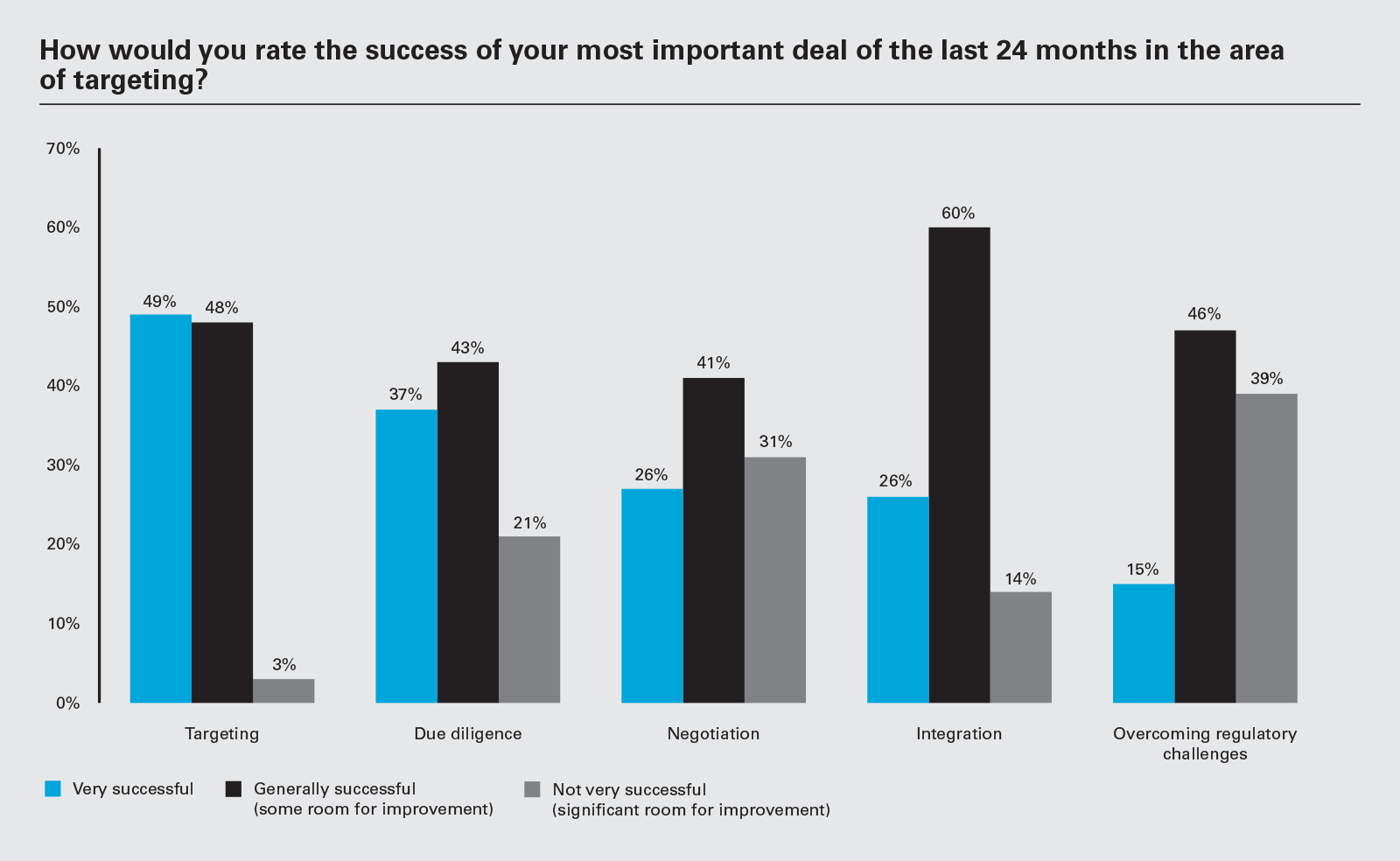 Due diligence in the deal

When it came to due diligence on regulatory and compliance matters, 35 percent of respondents said gauging the target's exposure is the greatest challenge, and 28 percent cited understanding how responsibility for compliance issues is allocated within the company is the most difficult.

These responses highlight the ongoing need for acquirers to engage competent regulatory counsel in the target jurisdiction early in the process. In particular, a tech target may be subject to privacy, national security or import/export regulations that warrant in-depth review. 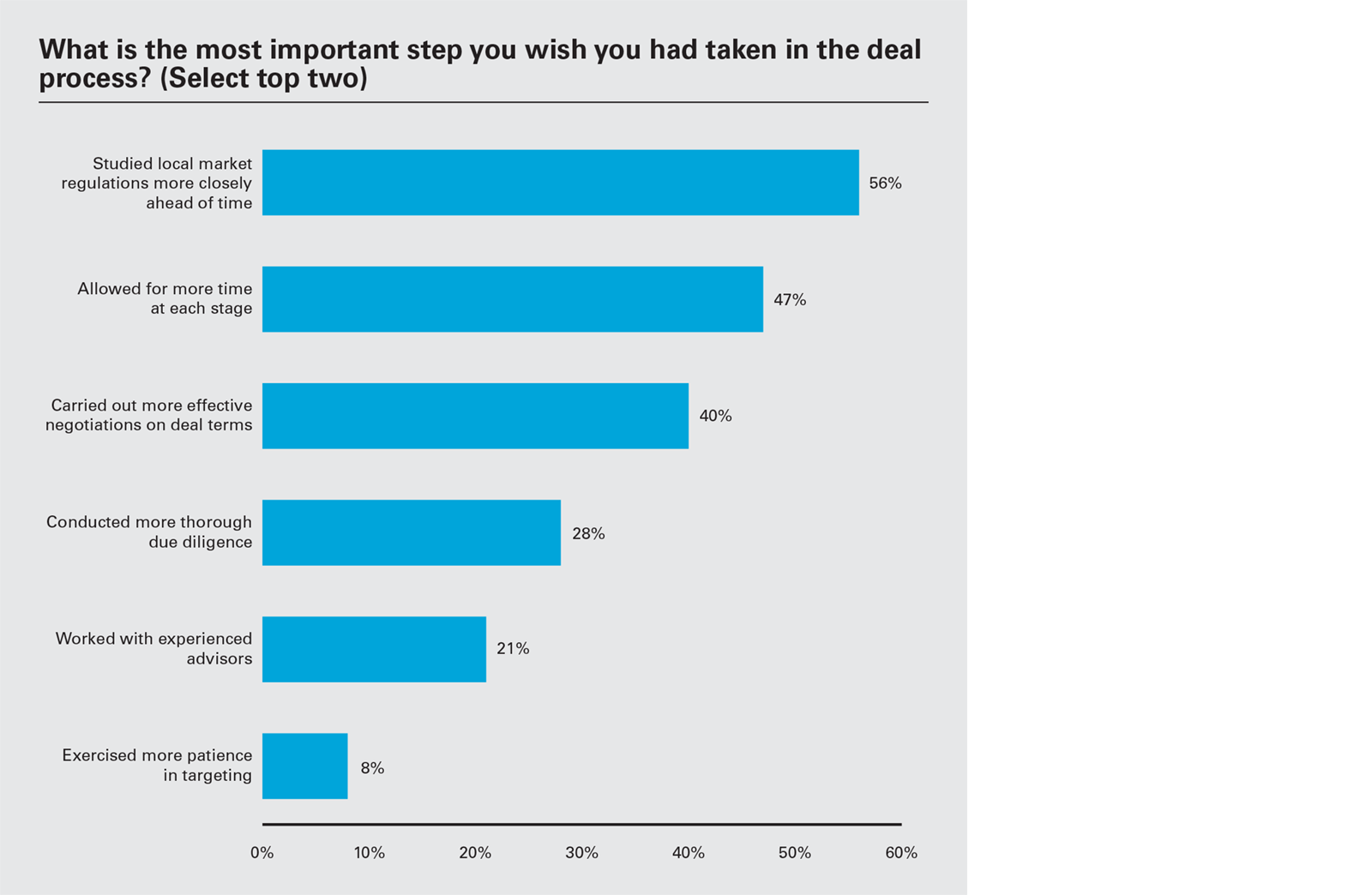 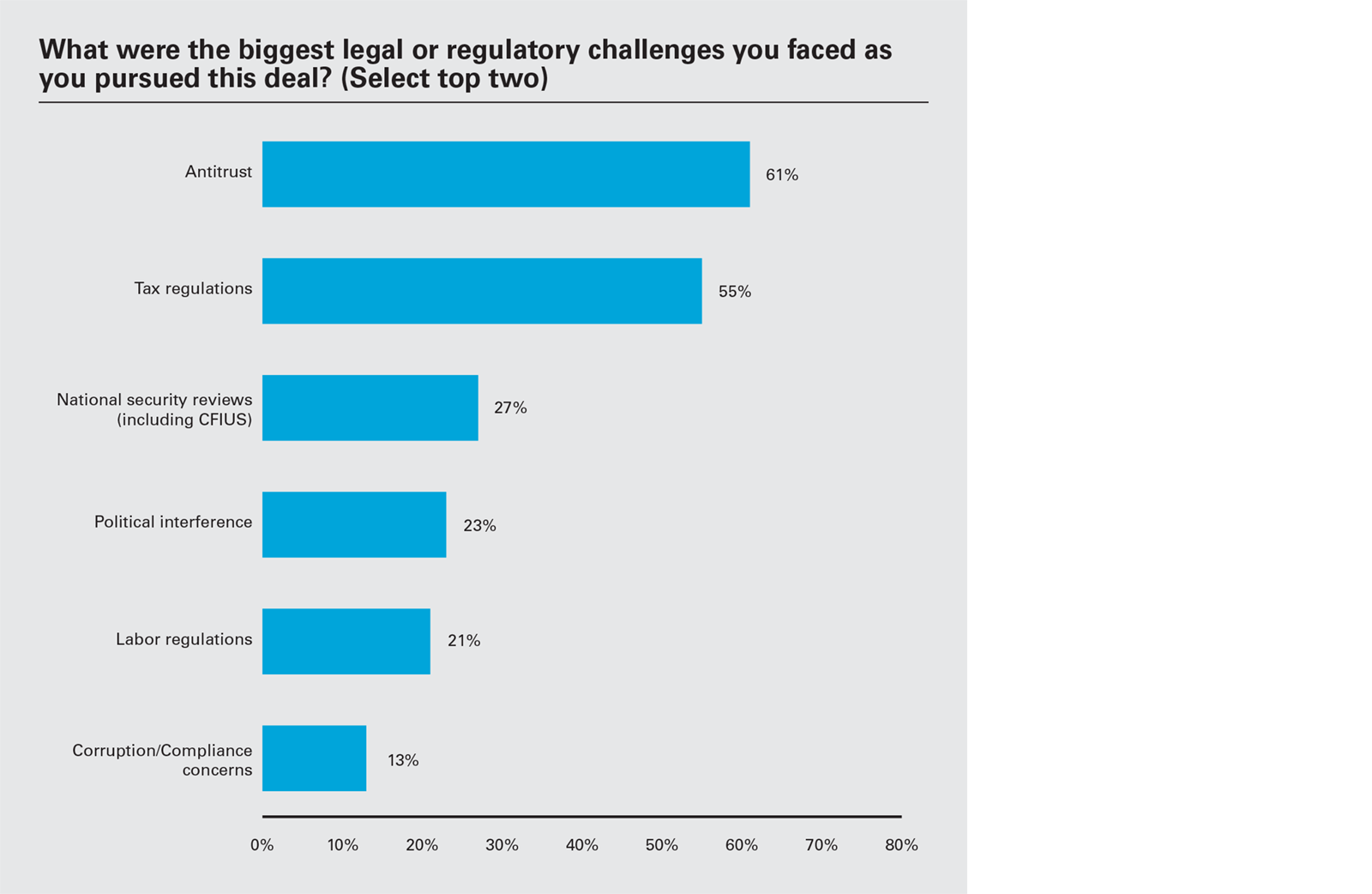 Culture is a perennial challenge

In addition to regulatory matters, our survey examined due diligence challenges across the deal process. In terms of cultural due diligence, evaluating the fit between the target and the acquirer's culture was the biggest issue, according to 39 percent of respondents

Overall, 74 percent say cultural differences made negotiations and due diligence more difficult, to some degree. "The market has evolved and information is easily available now compared to ten years ago, but at the same time complexities have also increased," says the SVP of an India- based telecommunications firm. "Our due diligence was not sufficient. Cultural aspects were something we misjudged completely—there was far more difference than we anticipated." 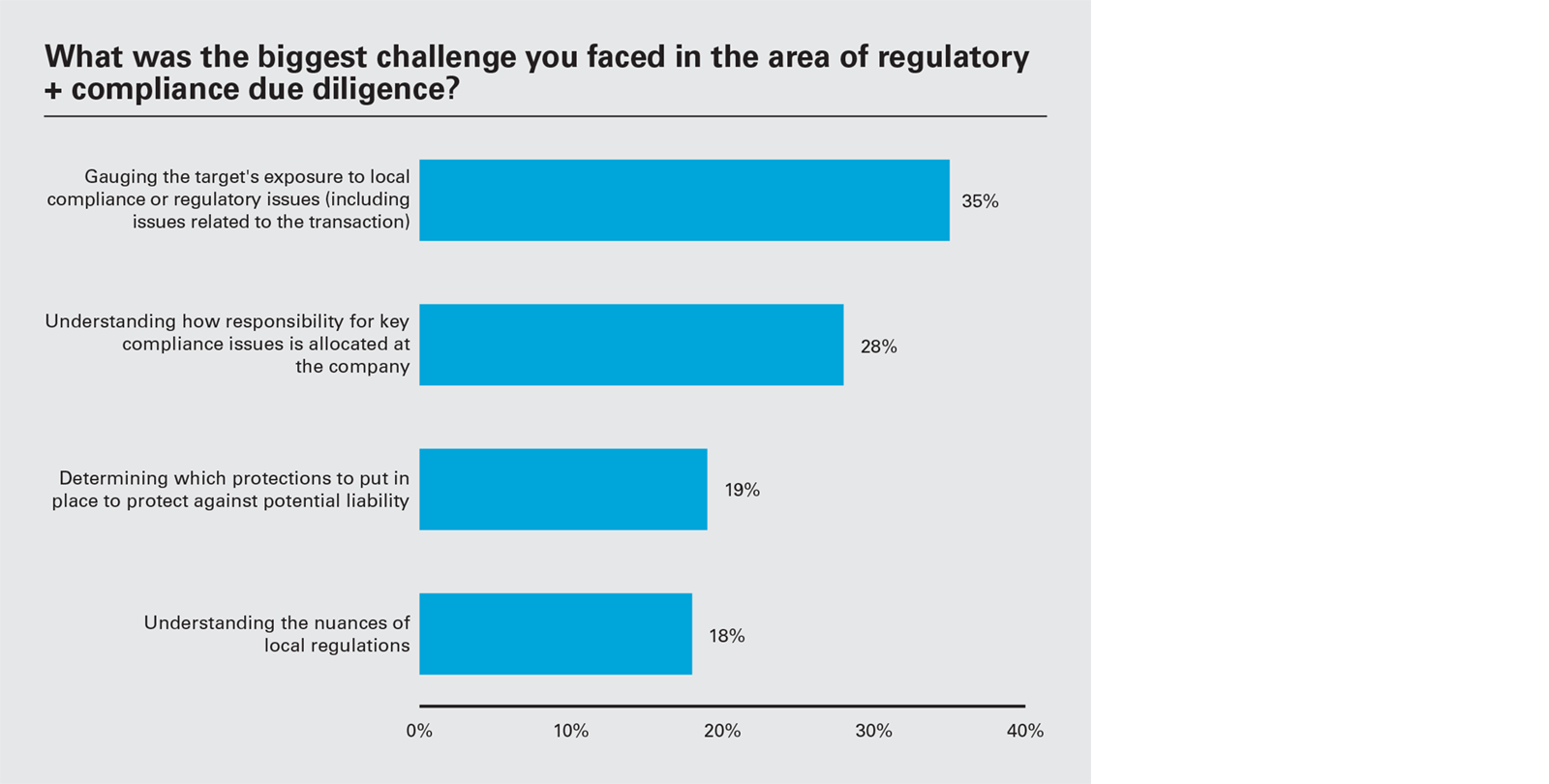 Insufficient information about the target company's assets is seen as the biggest challenge in doing tech and IP due diligence.

Due to the importance of trade secrets and other proprietary or information to their businesses, technology targets may prefer to limit the amount of information disclosed to a bidder until a firm offer is on the table. A bidder will have similar but opposite concerns. In a cross-border deal, this dynamic can be exacerbated by unfamiliarity with the target's or acquirer's jurisdiction and differing practices regarding the depth and pace of due diligence. 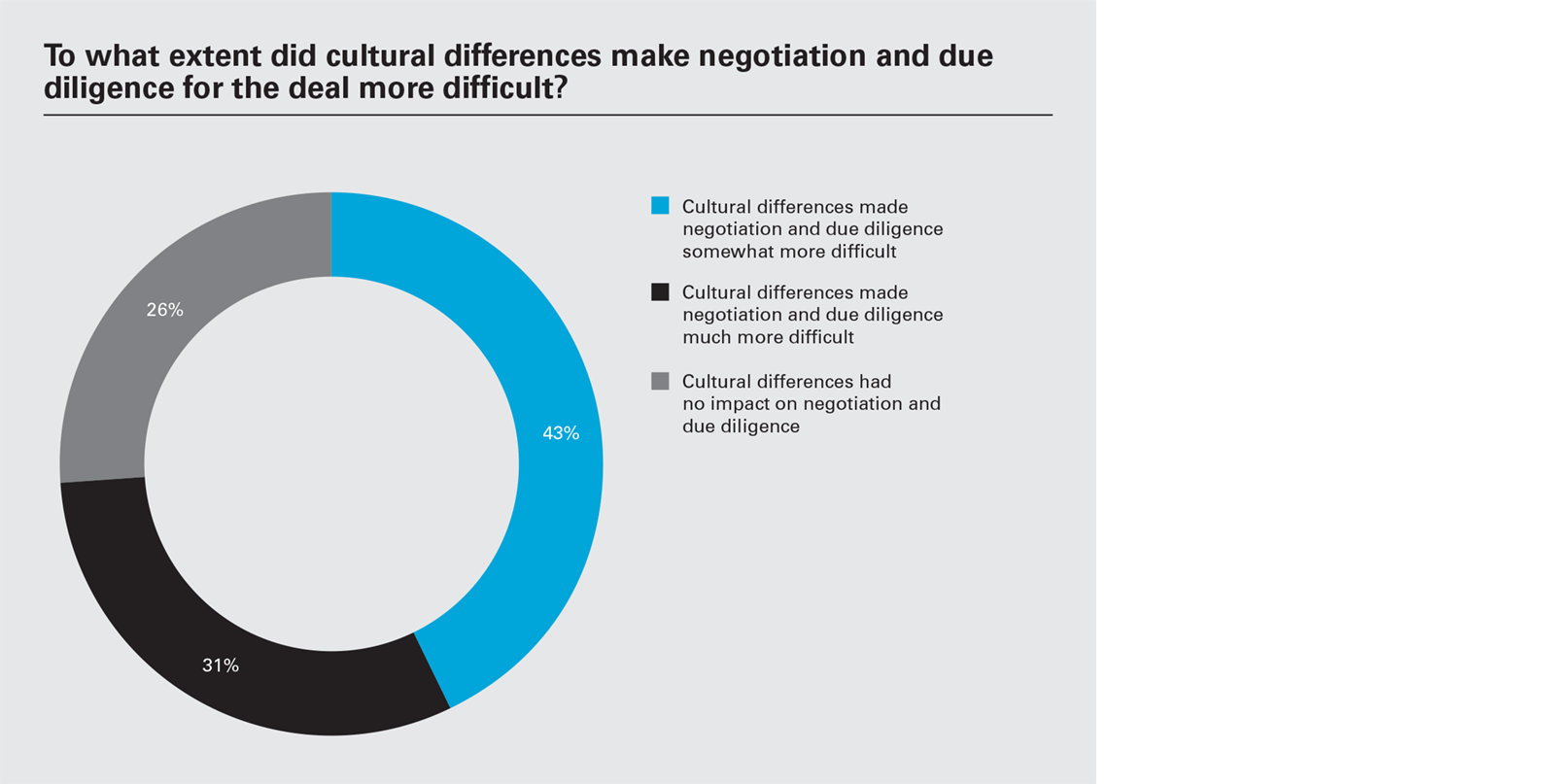 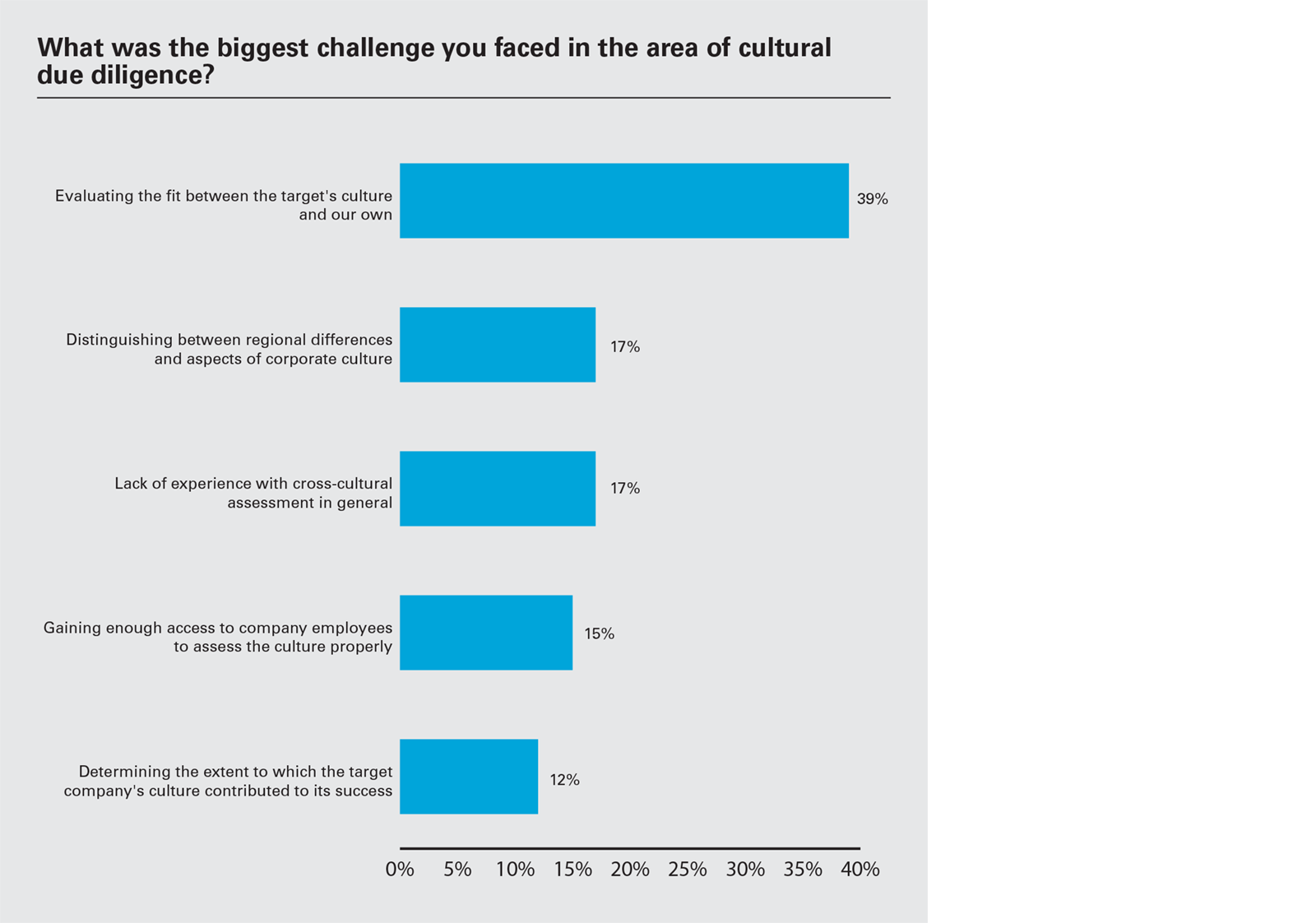