The Financial Regulatory Observer regularly sets spotlights on selected topics driving the regulatory and technological changes in the financial industry.

Digital transformation has become a key topic across financial institutions' board rooms. Yet the regulatory framework for the implementation of technological innovations still lags behind.

As technology removes physical borders from the securities industry, international financial institutions must remain vigilant to ensure their business activities do not violate US regulations.

An overhaul of the Consumer Financial Protection Bureau by its acting head has ruffled feathers and heralded a less aggressive enforcement regime.

In March 2018, the European Commission published a package of measures aimed at reducing the current stock of non-performing loans held by European banks and mitigating their build-up in the future. Separate guidelines on minimum regulatory provisioning levels for NPLs were published by the European Central Bank (ECB) through the addendum to its 2017 NPLs Guidance.

The new measures will have a significant impact on the NPL strategy of European banks, especially in countries with high NPL levels, but at the same time they will also affect the way in which lending is conducted and loans are collateralized and enforced in Europe.

NPL ratios may be falling across the EU, but the legacy stock of troubled assets and distressed loans of European banks is still one of the major impediments to a full economic recovery and increase of credit supply in some EU Member States. The total volume of NPLs in the EU is in the region of €910 billion, according to the European Commission.

Ratios diverge significantly across EU Member States. At the end of the third quarter of 2017, NPL ratios were close to 2 to 3 percent of total loans in a number of EU Member States (e.g. Belgium, Estonia, Germany and the Netherlands) or even lower in others (e.g. Luxembourg, Finland and Sweden). But in some of the countries that were most adversely affected by the financial crisis, NPL ratios are much higher—from between 10 percent and 15 percent in Ireland, Italy and Portugal, to a peak of 32.1 percent in Cyprus and 46.7 percent in Greece.

Over the past few years, the EU institutions have taken a number of initiatives to tackle NPLs. In July 2017, the European Council published an action plan to help reduce NPL levels and prevent their future build-up. In October, the commission issued a communication on the completion of the Banking Union and promised a package of measures designed to tackle NPLs in the spring. On March 14, 2018, the European Commission duly presented its package of measures, which comprised:

Meanwhile, on March 15, 2018, the European Central Bank published the final version of its Addendum to the ECB Guidance to banks on NPLs.

Under the current regulatory and accounting framework, credit institutions enjoy a degree of discretion in determining NPE coverage levels. Such discretion has led to under-provisioning and loss forbearance in certain cases, as some credit institutions have adopted a "wait and see" approach in order to avoid or delay loss recognition—thereby reducing or postponing any negative impact on their common equity tier 1 (CET1) ratios.

The required provisioning level will depend on whether the NPE is past due or has been classified as NPE despite the fact that the institution still receives full payment from the debtor without excessive (i.e. 90-day) delay. It will also depend on the number of years after the date on which the exposure was classified as NPE, and whether the NPE (or part of the NPE) is classified as "secured" or "unsecured" exposure in accordance with the criteria specified in the proposed regulation.

The above regime will only apply to exposures originated after March 14, 2018. However, where the terms and conditions of an exposure incurred prior to March 14, 2018 are modified by the institution in a way that increases its exposure to the debtor, the exposure shall be considered as having been incurred on the date of the modification and will fall under the new regime.

Compliance with the supervisory expectations indicated above will be assessed on a case-by-case basis by the ECB in the context of the supervisory review and evaluation process (SREP)—starting from 2021. If the ECB considers that the prudential provisions do not adequately cover the expected credit risk, supervisory measures under the Pillar 2 framework might be adopted.

Rules on Credit Servicers. The proposed directive looks to introduce a common framework for credit servicing activities, with a view to removing the current impediments to the cross-border performance of such services. Under the proposed directive, a credit servicer is defined as any natural or legal person (other than a credit institution or a subsidiary thereof) who carries out one or more of the following activities on behalf of a creditor:

The definition is broad in scope and will likely capture a number of services and activities that are currently not subject to specific regulation in some EU Member States. Under the proposed directive, credit servicers operating on behalf of a credit institution or a credit purchaser in respect of a credit agreement issued by an EU credit institution (or its EU subsidiaries) shall be authorized to operate as such by the competent authorities of their home Member States.

The license granted under the proposed directive will allow credit servicers to operate on a cross-border basis under the right of establishment or freedom to provide services in accordance with the customary principle of EU financial law.

The proposed directive also specifies certain requirements applying to credit servicers, including with respect to the content of the credit servicing agreement, the record-keeping obligations and the outsourcing of services to third parties.

Rules on Out-of-Court Recovery of Secured Loans. One of the key goals of the proposed directive is to facilitate the recovery of secured loans (thereby reducing the risk of NPLs stock-piling) through the introduction of accelerated extrajudicial enforcement procedures. Such enforcement mechanisms may be used by creditors in connection with secured credit agreements entered into with borrowers that do not qualify as consumers (or non-profit-making companies).

The possibility to use the accelerated out-of-court enforcement procedures is subject to a number of conditions, including that the mechanism must be agreed in writing. The enforcement of the collateral can be made through a public auction or private sale. After the enforcement of the collateral, the creditor must pay the business borrower any positive difference between the proceeds of the sale of the asset and the sum outstanding under the secured credit agreement.

The business borrower may challenge the use of the these mechanisms before national courts where the sale of the assets provided as collateral has not been conducted in accordance with the rules set forth in the proposed directive. 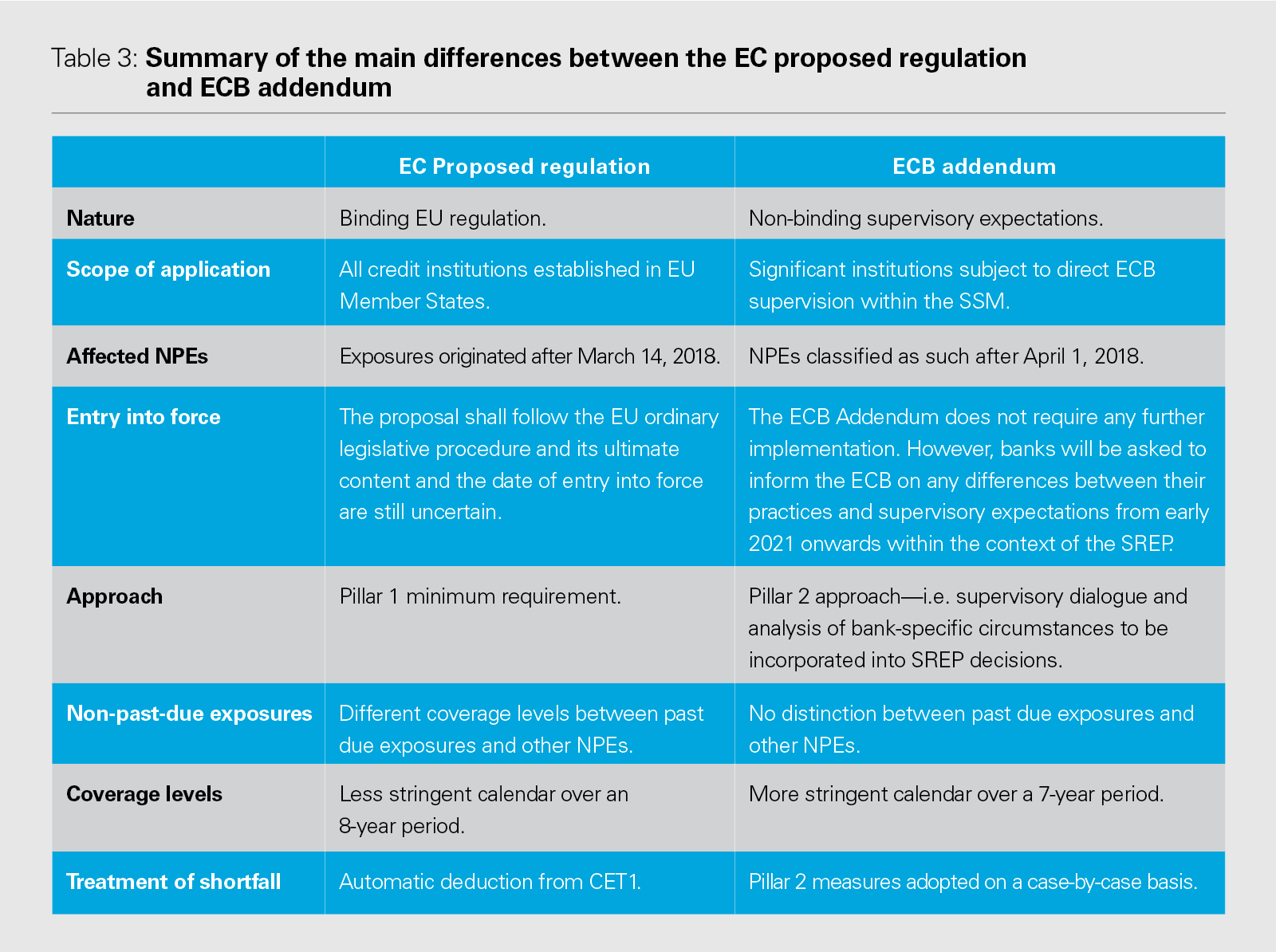 In essence, the AMC blueprint is a summary of the guidelines given and practice followed by EU institutions when dealing with State Aid cases in the banking sector during the last decade, particularly with respect to the use of publicly sponsored AMCs to clean up the balance sheet of credit institutions.

The blueprint does not innovate the current EU legal framework, but rather clarifies that AMCs can be used as an exceptional tool provided that the restrictions deriving from EU State Aid rules and the applicable resolution framework are complied with. Based on such legal and regulatory constraints, the AMC Blueprint identifies different scenarios where AMCs can be used (see table below). 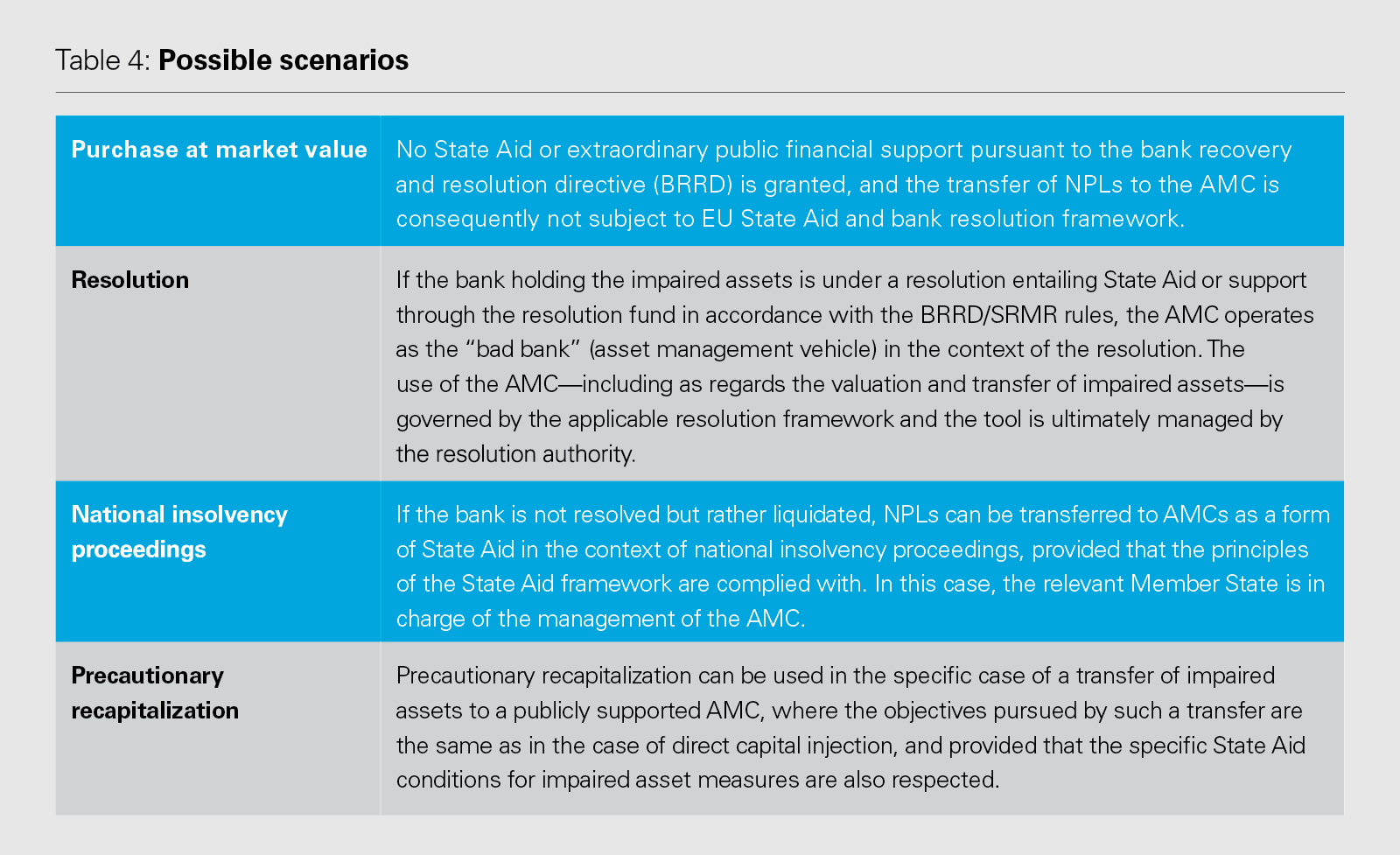 The AMC blueprint sets out the principles that should govern the design and set-up of publicly supported AMCs, their effective operations and disposal strategies, as well as the closing of the AMCs— which shall be established for a temporary period of time.

The combined effect of the EC and ECB measures and the entry into force of IFRS 9 may create incentives for EU banks to abandon the "wait and see" approach. The banks may sell their NPL portfolios in view of the forthcoming application of the minimum supervisory coverage requirements (and, for SSM significant banks, the ECB quantitative supervisory expectations on NPL coverage levels). Member States will be allowed to use national AMCs to support such processes, even though the current limits deriving from EU State Aid and the resolution framework are neither lifted nor amended under the AMC Blueprint.

The package proposed by EU institutions could also force EU banks to review their credit policies to incorporate the prospective impacts of NPL provisioning. It is yet to be seen whether this review will be beneficial and actually increase credit supply to SMEs—which is one of the goals underpinning the EC proposals. Indeed the strengthening of NPL coverage levels might induce EU banks to adopt a more prudent approach in their lending strategies, over-collateralize their loans or immediately enforce their claims as soon as the borrower becomes non-performing.

The proposals on the prudential backstop for NPL provisioning fail to recognize the existence of significant differences among EU Member States with respect to the average duration of debt recovery procedures. To a certain extent, European institutions are betting on the effectiveness of out-of-court accelerated enforcement procedures and other legislative proposals on debt restructurings to overcome these national differences. But the "one-size-fits-all" approach enshrined in the NPL provisioning calendar could ultimately result in an unlevel playing field for the internal market and the EU Banking Union, due to the different judicial systems and efficiency of national bankruptcy and enforcement procedures.