Deployment of battery storage technology is gaining pace, but it may struggle to reach its full potential until energy regulation and financing solutions adapt

Battery storage has traditionally been seen as a supplement to the power generation mix that offers a solution to intermittency issues brought about by increased renewable penetration and a means of avoiding potentially costly grid reinforcement works. Even though the underlying technology is relatively well established and proven, recent improvements may open up new opportunities.

Regulators—and the electricity market in general—have struggled with how best to categorise battery storage in terms of generation, supply or as part of the transmission/distribution network. In most jurisdictions, battery storage is treated as a form of generation—a backup option filling a gap for when generation is interrupted (e.g., because the wind stops blowing) or system stress events occur.

If we look at traditional government support for renewable energy, battery storage has never sat as comfortably with feed-in tariff (FiT) models. This is due in part to the comparatively high costs which have previously been associated with the technology compared with its renewable counterparts. A classic FiT model also fails to reward battery storage for the stabilising services or the integration and response efficiencies which batteries typically offer to the grid.

Battery storage has to date struggled to attract traditional project finance providers, largely due to its failure to achieve stable revenue streams.

Recent R&D advances in other industry sectors have translated into considerable improvements and efficiencies in the battery storage space, assisting the downward cost trend.

Prices have decreased significantly over recent years. This is due in part to economies of scale being achieved by electric vehicle manufacturers in particular. Moody's is currently predicting costs of approximately US$100 per kWh by 2020 for lithium-ion batteries, down from US$10,000 in the early 1990s.

Battery installations stand at c131 GWh per year globally, with Bloomberg projecting manufacturing capacity to rise to more than 400 GWh per year by 2021 and 1,291 GWs of new capacity added by 2050. Some commentators are speculating that India will be a key manufacturing hub. 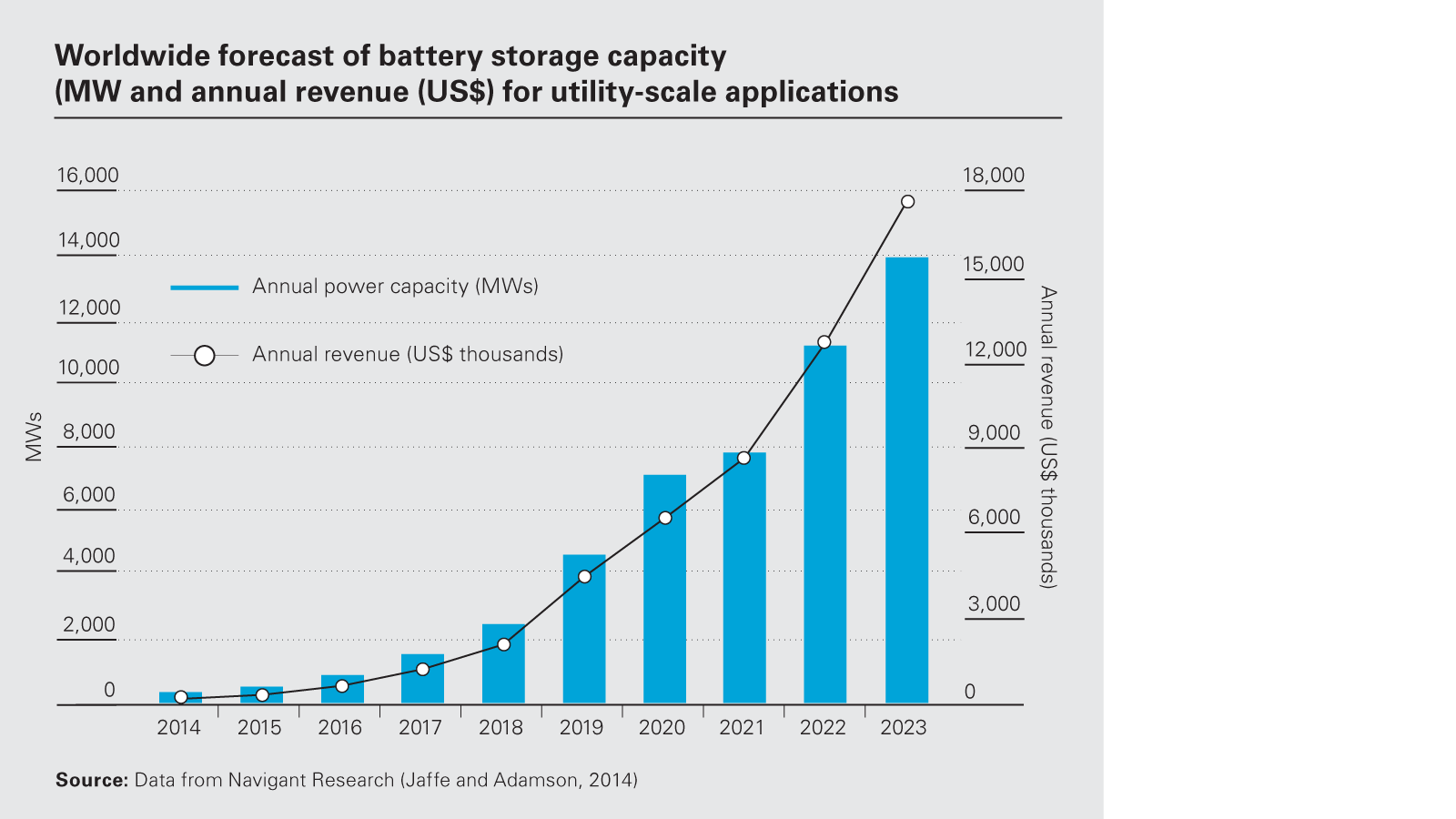 Technological advancements coupled with a move to view battery storage as more than just a 'generation add-on' means there is an opportunity to reconsider its categorisation as a form of generation, heralding a new era in battery storage.

A current concern however is that trying to shoehorn a disruptive technology into traditional regulatory categorisations may hinder investment and create a barrier to further innovation and development by providing inappropriate or unhelpful economic signals.

Battery storage does not sit well with FiT models, and while alternative economic support mechanisms are available, such models do not truly suit or appropriately compensate battery storage technologies.

For example, battery storage has been allowed to participate in the UK Capacity Mechanism with 150 MWs of de-rated capacity being selected in the latest round of auctions. But it still only accounts for a very small percentage of the overall contracted capacity, representing just 0.3 per cent of the total capacity available—a decrease compared to the previous auction round where c500 MWs of battery storage was selected. This is despite the changes that have been introduced to the UK Capacity Market system to significantly decrease de-rating factors for battery storage providers, in an effort to encourage the participation of longer-term battery storage installations.

The tumbling prices (just £8.40 per kWh in the 2018 T4 auctions) saw nearly a gigawatt of pre-qualified capacity fail to secure a contract at this price.

Similarly, Tesla's 100 MW Powerpack project in South Australia is already touted as having reduced capacity costs for the Australian Energy Market Operator by 90 per cent, but the capacity mechanism in place fails to reward Powerpack's hyper-reactivity when compared to slower reacting competitors.

As well as direct support, other financial drivers from capacity market regulation can lead to the indirect promotion of 'behind the meter' battery storage solutions. Stronger penalties for failure to provide capacity for selected participants in capacity and balancing markets can encourage the use of large-scale integrated batteries by more traditional installations.

Drax power station, a biomass and coal installation in North Yorkshire in the UK, has announced its intentions to install two 100 MW battery storage facilities to accompany its proposed installation of a further 3.6 GWs of gas-fired generation. Equinor and Masda have already unveiled a 1 MW battery storage system, 'Batwind,' attached to the 30 MW Hywind Scotland floating offshore wind farm as a means of improving the installation's operational and cost efficiencies.

Battery storage providers can offer a range of ancillary services to grid operators, including frequency response services and balancing services. The Primary Control Reserve (PCR) Market in Germany, for example, permits battery storage operators to participate in a weekly auction to offer capacity to deal with grid frequency deviations of 0.01 Hz or more.

The PCR market is highly competitive, however, and the required response time of 30 seconds means that battery storage providers compete with gas plants, notwithstanding response times for lithium-ion batteries that can measure in the milliseconds. The PCR therefore fails to fully reward the improvements in response times battery storage brings and which ultimately could make frequency and grid management far more efficient.

Batteries and storage technologies blur the traditional boundaries between grid services and the grid itself. Unbundling requirements in many jurisdictions, including across the European Union, prevent TSOs and DSOs however from owning and operating generating assets.

Should batteries form part of the grid and the distribution network rather than being categorised as generation? Taking such an approach would potentially enable incorporation of costs of such services into the costs levied for grid use, whether levied on a socialised, participant or volume basis.

Revenues from capacity and ancillary services are very much 'demand' driven, making them 'peaky' and difficult to model. The revenues lack the stable flows often required for traditional debt-service purposes and, as a result, financing battery storage installations is proving problematic.

In the UK, capacity market agreements for a new technology can extend for 12 to 15 years, but potentially cover only a small percentage of a facility's capital cost. The battery storage has been relatively expensive, and the grid service revenues are dependent on demand. Germany offers much shorter weekly contracts via the PCR, but those contracts fail to reward battery storage technologies for the value they bring. Both models present a challenge to improving technologies to present a business case attractive to many lenders.

But some projects are succeeding in attracting finance. AES Corp. managed to secure financing (on a non-recourse basis) for 1.4 GWs from a battery-based energy storage plant in Southern California. The financing was a mix of secured notes, senior debt and equity. The project's revenues come in the form of power purchase agreements (PPAs) from Southern California Edison for 100 per cent of the capacity produced in exchange for a fixed monthly capacity fee.

The PPAs included a dedicated PPA for 100 MWs of four-hour duration battery-based energy storage, which would certainly provide a path to project finance investors.

Similarly, Santander has announced its 'desire to be a leader in this fast developing sector' in Europe, with the provision of £28.5 million to a battery storage provider in the UK to fund 100 MWs of grid-scale batteries. 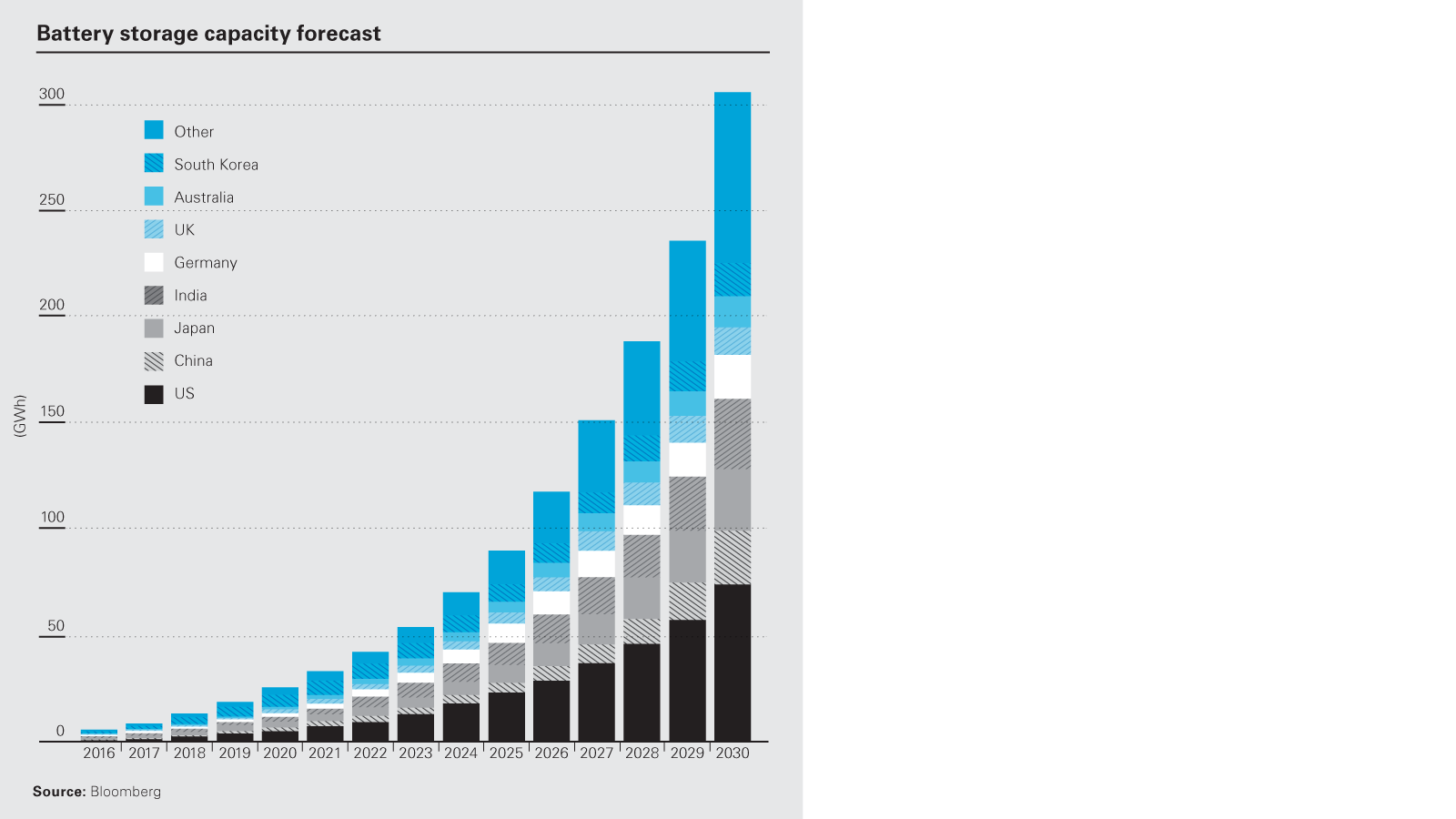 One of the core growth opportunities for battery storage lies at the micro level. As the more savvy consumers, or 'prosumers'— customers who consume goods aimed at the professional market—seek more independence from utility providers and become more energy‑empowered, movements around peer-to-peer electricity trading between micro-generators will arise.

Blockchain technology has also sparked the beginning of micro-trading, with the UK's first blockchain energy trade taking place between housing blocks in London in April 2018. There may be opportunity for the provision of battery services in exchange for a small flat fee or on a charge-per-use model to connected micro grids to further their energy aspirations and smooth out peaks and imbalances that could be potentially catastrophic for systems of this size. 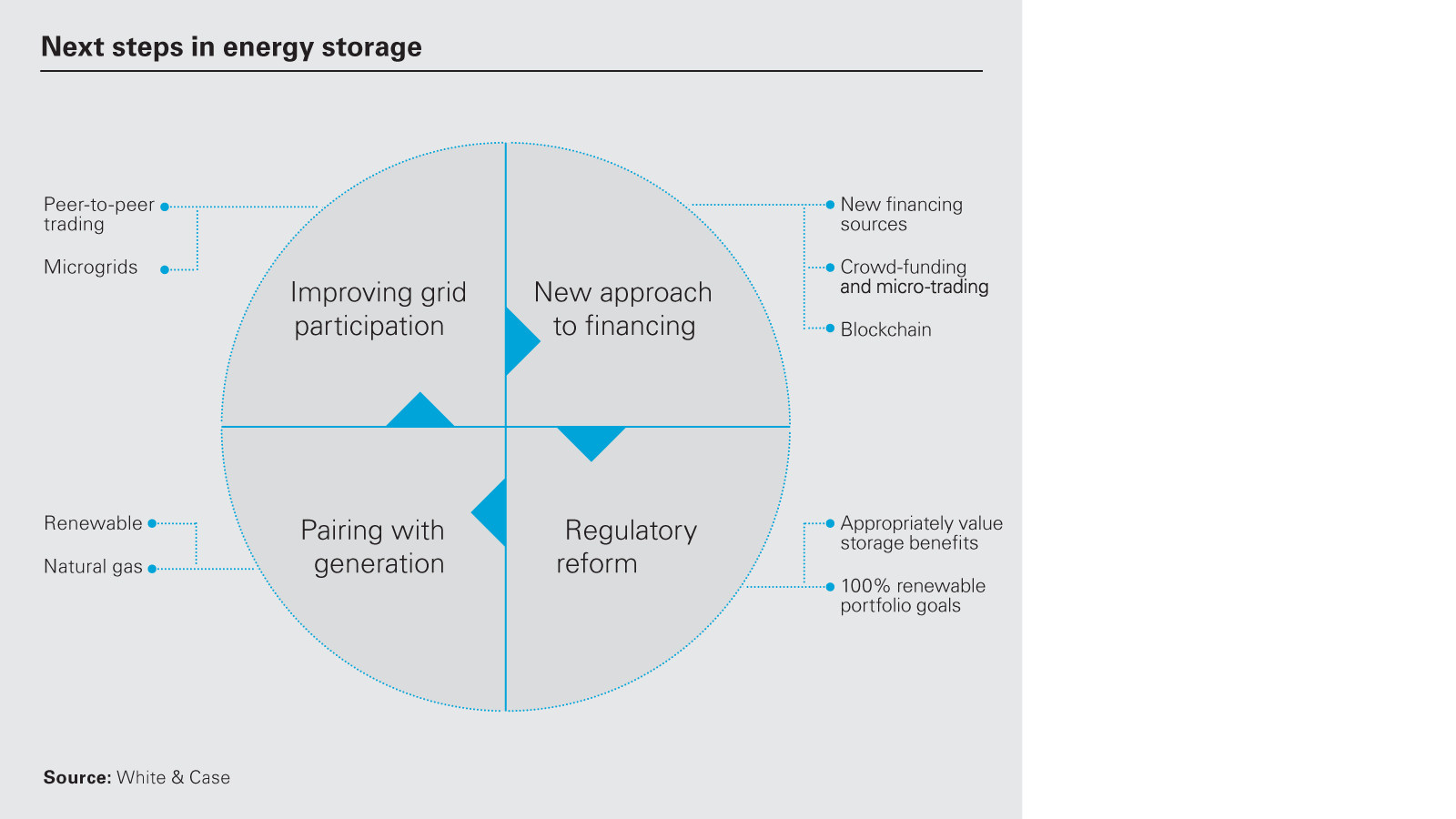 The rise of 'green financing' provides further potential for the future financing of battery storage projects.

Regulation must catch up with technology

Batteries and battery storage is a growth technology, but at the moment, its growth is being predominantly driven by electric vehicle demand. If battery storage is to deliver improvements in the electricity market, regulatory treatment and the financial rewards available to battery storage will need to evolve. Battery storage needs to be seen not just as generation back-up or an ancillary grid service, but as a resource that can provide benefits across a whole spectrum of roles in a well-managed dynamic market and grid.