From rural farmlands to modern megacities, the complex and diverse Asia-Pacific infrastructure sector continues to attract international investment. Our survey shows investors are very positive about future opportunities and analyses the countries and sectors attracting this optimism.

The Asia-Pacific infrastructure market is open for business and opportunities abound. However, as our exclusive survey reveals, the prevailing wisdom on sentiment, regions and sectors may be wide of the mark.

In Q4 2018, White & Case, in partnership with Inframation Group, surveyed 100 senior-level direct equity investors and financial services firms who had developed, funded or invested in at least one APAC infrastructure project in the past 12 months, with a value in excess of US$100 million.

The survey included a combination of qualitative and quantitative questions, and all interviews were conducted over the telephone by appointment. Results were analysed and collated by Inframation Group, and all responses are anonymised and presented in aggregate.

The research has proven to be illuminating, as a number of the findings have gone against the grain of current popular thought. Among other key findings, several intriguing themes have emerged:

Despite the infrastructure gap, the threat of trade wars and global political instability, the outlook from respondents is overwhelmingly positive—88 per cent of firms are expanding their teams in the region in 2019. Nobody is predicting any contraction.

If 2018 was the year for investment in renewable energy, then 2019 appears to be the one for transportation—in particular, roads. In spite of the clamour around other infrastructure sectors, roads are seen as the key infrastructure sector destination—67 per cent are planning to invest in the sector.

Respondents’ choices for top investment destinations cut through recent noise about the rise of some developing APAC countries. According to our survey, investors will be concentrating their activity on larger, more stable countries such as Australia, India and Singapore. APAC countries with perceived higher political/systemic risk such as Sri Lanka, Pakistan and Vietnam appear to have drifted down the priority list as investment destinations for many investors.

Above all, investors see APAC as a land of opportunity. Indeed, when asked about the greatest benefits to investing in the region, opportunity crops up in a number of different guises. Over half see a ’wealth of opportunity‘; more than a third envisage ’development of knock-on/secondary opportunities’, and a third are looking forward to the ’consolidation of related opportunities‘.

The research also addresses barriers to investment such as political risk, issues with public private partnerships (PPP) and the threat of trade wars but, overall, the general feeling among respondents is that the significant benefits on offer outweigh any challenges. As the director of M&A from a sponsor in Japan says: ’There is plenty of room for growth, development and advancement. There is a complete mismatch in the current infrastructure and the actual need based on the growth these markets are having. The opportunities in these markets are significant.’

Video: Cutting through the noise: Infrastructure in Asia-Pac

Partners Adeline Pang and Josh Sgro discuss the outlook for infrastructure in Asia-Pacific based on the survey of 100 decision makers in the market.

View this video on its own page

The overwhelming majority of respondents see a multiplicity of opportunities in a variety of sectors and regions. However, our survey reveals that the ‘noise’ around some investment locations may be just that—noise.

While investors are looking at a variety of sectors in the region, our survey reveals that roads are the top priority, while both conventional and renewable energy are still very much on the radar.

The rewards for infrastructure investors in APAC can be lucrative, but the region is not without its risks—particularly political ones.

There has been a growth in the number of funds targeting the APAC infrastructure market as investors seek out greater returns. Meanwhile, public-private partnerships are likely to increase if they can overcome several systemic barriers.

Risks may persist around infrastructure investment in APAC, but the overall outlook is very positive.

Learn more about our work ›
Infrastructure

There has been a growth in the number of funds targeting the APAC infrastructure market as investors seek out greater returns. Meanwhile, public-private partnerships are likely to increase if they can overcome several systemic barriers

The financing for major infrastructure projects in the region will come from a variety of sources, according to our research, although the results are largely as expected. Respondents feel that pension funds (70 per cent), investment funds (64 per cent) and equity investors (39 per cent) are likely to be the main sources of investment.

A number of market players, including major private equity houses, are now looking at the APAC market. For example, at the end of last year, it was reported that New York–based private equity firm KKR was planning to launch its first Asia-focused infrastructure fund of between US$1.5 and US$2 billion.

One significant development is an apparent shift in the way funds provide equity and debt as firms rebadge themselves to take advantage of the depth of opportunities on offer. A market traditionally populated almost entirely by dedicated infrastructure funds is now seeing the presence of others, such as pension funds, looking to spread their interest to infrastructure in the APAC region.

Some are now exploring ways to take on more than just equity stakes in projects—raising the required debt as well, and so effectively funding projects in their entirety. The risks are greater, but so too are the returns. The opportunities and security of returns have become sufficient for funds to see the sense in taking a greater stake in the form of debt as well. The emergence of such innovative forms of financing can be seen as indicative of growing confidence in the APAC region.

This environment for funding and finance is being given a further boost by the activities of national quasi-governmental export credit agencies and multilateral agencies such as the ADB. Support from these organisations is helping to drive down the costs of debt funding, particularly in countries where political risk has previously made financing difficult. 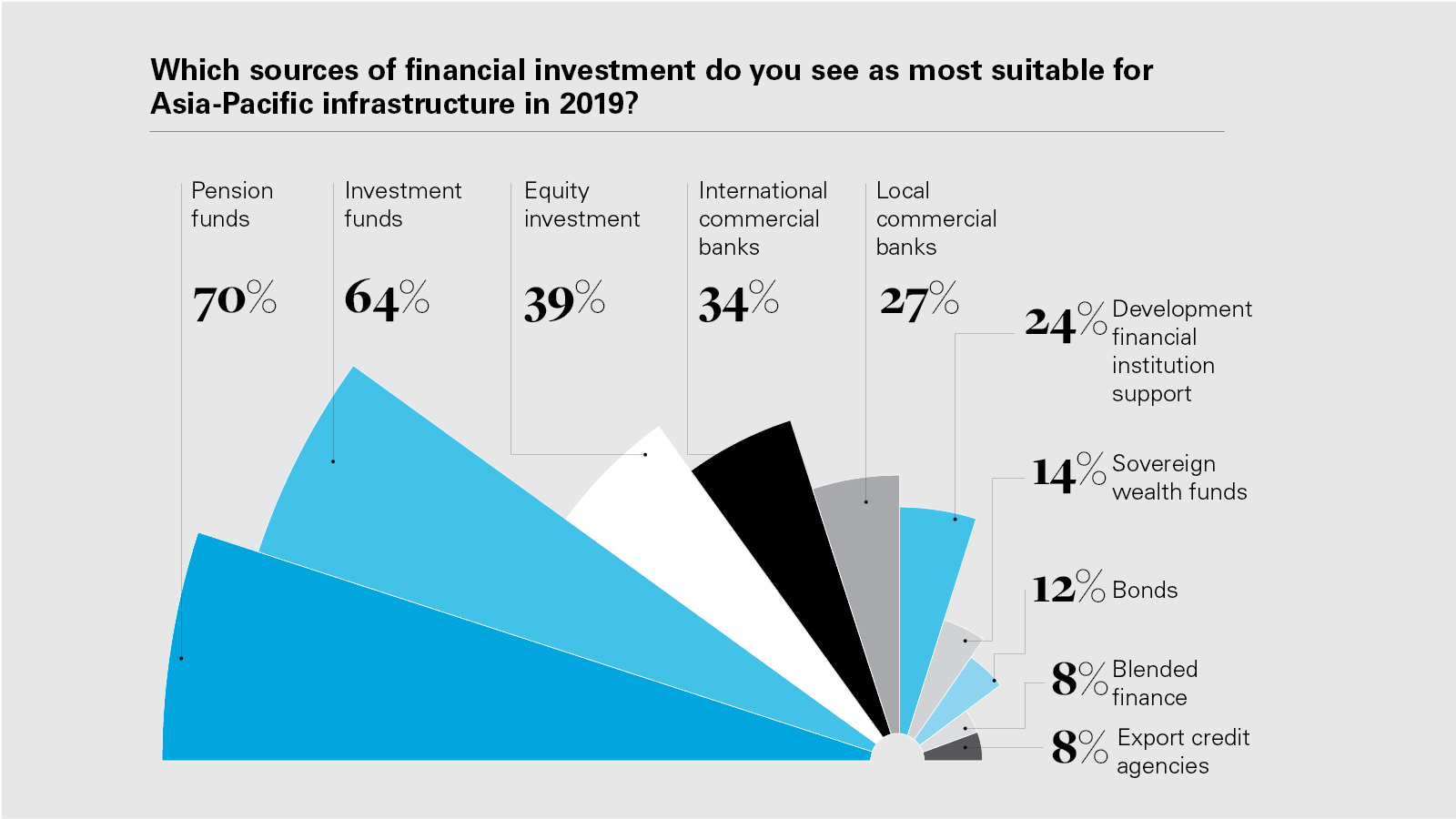 Obtaining affordable finance is still a considerable challenge for projects across the region. Our survey results point to a market belief that PPPs will be the preferred method of delivering infrastructure projects for developing APAC nations—according to 71 per cent of respondents.

Definitions and interpretations of PPPs tend to vary across the region. Not everywhere can it be assumed that an equitable partnership will be set up on favourable terms for investors, and with all of the right documentation in place. Vietnam, for example, is one country where the government has been repeatedly lobbied by stakeholders, who feel the terms of concessions and power purchase agreements need to improve and become more internationalised. However, the tried and tested model that has worked well in developed countries is spreading to others.

Other commentators are less than convinced—38 per cent see a lack of support for PPPs as a major risk, while just over a third (36 per cent) believe a lack of government strength in PPPs is a key obstacle.

One US investment fund director says: ‘PPPs are still fairly new to APAC, and there is very slow adoption. The framework is yet to be developed completely and there is no guarantee that governments will stick to PPPs. Their commitment level is poor’.

Despite these misgivings, the overall picture for PPP development appears to be improving. ‘Infrastructure hubs’ like Singapore are providing a useful method of spreading good practice and benchmarking. The PPP models may vary from one country to another—with projects remaining as state-owned enterprises before selling to private interests in some cases—but in the Philippines and elsewhere, the problems and difficulties have been overcome to bring PPP projects to financial close.

Overall, market commentators feel that there is a great deal of liquidity looking for good projects to invest in, from pension and investment funds, equity and commercial banks. An increase in multilateral and government-to-government financing is a trend remarked upon with increasing frequency. The big question is, can countries reform or develop their legal frameworks to make greater use of the financing on offer?

There are signs that this is happening. Countries are implementing measures to develop their capital markets and give greater freedom for their pension funds to invest. Such reforms are needed for countries such as Laos, Cambodia and Bangladesh to attract foreign investment.