Many survey respondents are so confident about the prospects for M&A activity in the next 12 months that they do not view a possible global economic slowdown as an obstacle. More than three-quarters of respondents (76 percent) say a slowdown would not diminish the likelihood of their engaging in M&A. Of that number, almost half (37 percent) say a slowdown would actually increase the chances they would do a deal.

Amid a slowing global M&A market—driven not least by rising political and economic uncertainty—this might be considered complacency rather than confidence. But survey respondents insist their optimism is not misplaced. "The slowdown has been rather gradual," points out the director of M&A and corporate development at one Israeli corporate. "We have made plans to continue our activities while finalizing existing talks with companies."

Again, Israel's technology sector is one factor inspiring confidence. Businesses around the world are scouring the country for assets that might boost their own innovation. US giant Walmart's recent purchase of the artificial intelligence and natural language processing startup Aspectiva is just one example of this phenomenon. While this was the retail business's first startup acquisition in Israel, it has a number of other ventures in the country including investments in technology think tanks and accelerators. 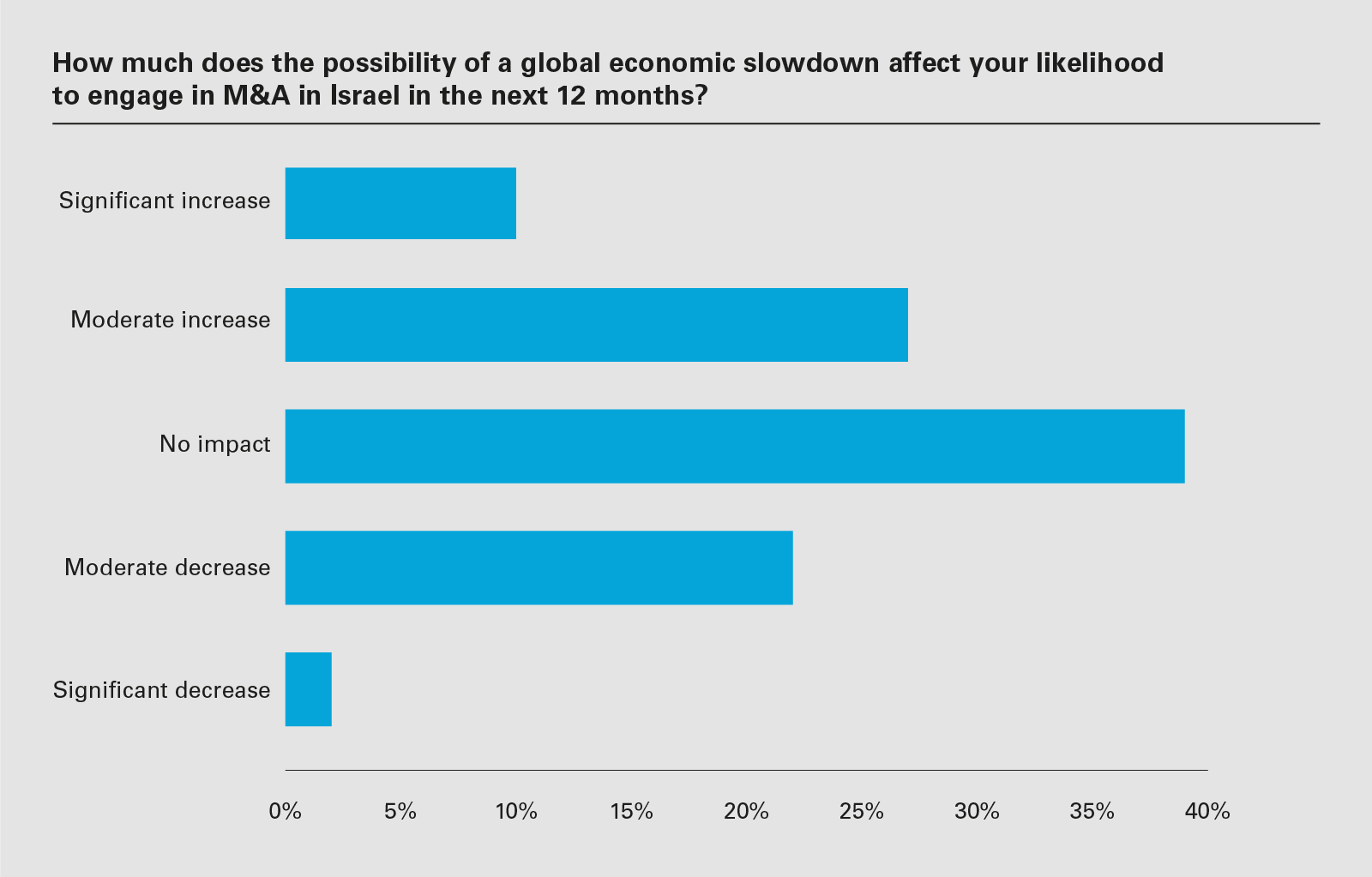 As for the 37 percent who feel a global slowdown could swell Israel's M&A numbers, the country's recent healthy performance may have persuaded some that it represents a safe haven. While the Israeli economy is not immune to external risks, the country's unemployment statistics (currently at an all-time low), supportive monetary policy and rising wages are underpinning consumer spending and investment.

Meanwhile, growing tensions between the US and a number of regions (including Mexico and China) are unlikely to affect Israel, a key ally in the Middle East. It is notable that so far this year US companies have made five of the top-ten acquisitions in the country.

The CFO of an Israeli corporate says of the global picture: "We've seen how well Israeli companies have coped with difficult situations in the past, so while I think the economic conditions do play a certain role in the growth dynamics, they will not deter us from engaging in M&A in the next 12 months."

This is not to suggest Israeli M&A faces no headwinds at all. However, survey respondents are just as likely to be concerned that regional instability affecting M&A prospects reflects global economic volatility. The former is closer to home and tougher to insulate against. However, the CFO of one Israeli private equity firm says local issues have been eased by the "establishment of security conditions, leading to a degree of normalization, with only slight disruptions now and again."

Nor do respondents consider themselves completely unaffected by the political problems confronting the global economy. More than half (51 percent) think the rise of protectionism and trade disputes are the most significant threat to M&A activity; by contrast, just 20 percent are more concerned about political instability in Israel itself. With cross-border M&A activity having represented such a significant proportion of deal values and volumes in recent years, this is not surprising.

Nevertheless, confidence is robust. More than two-thirds (69 percent) of respondents point out that Israel's regulatory environment is similar to that of other countries, or easier to navigate, which should encourage both domestic and international bidders. 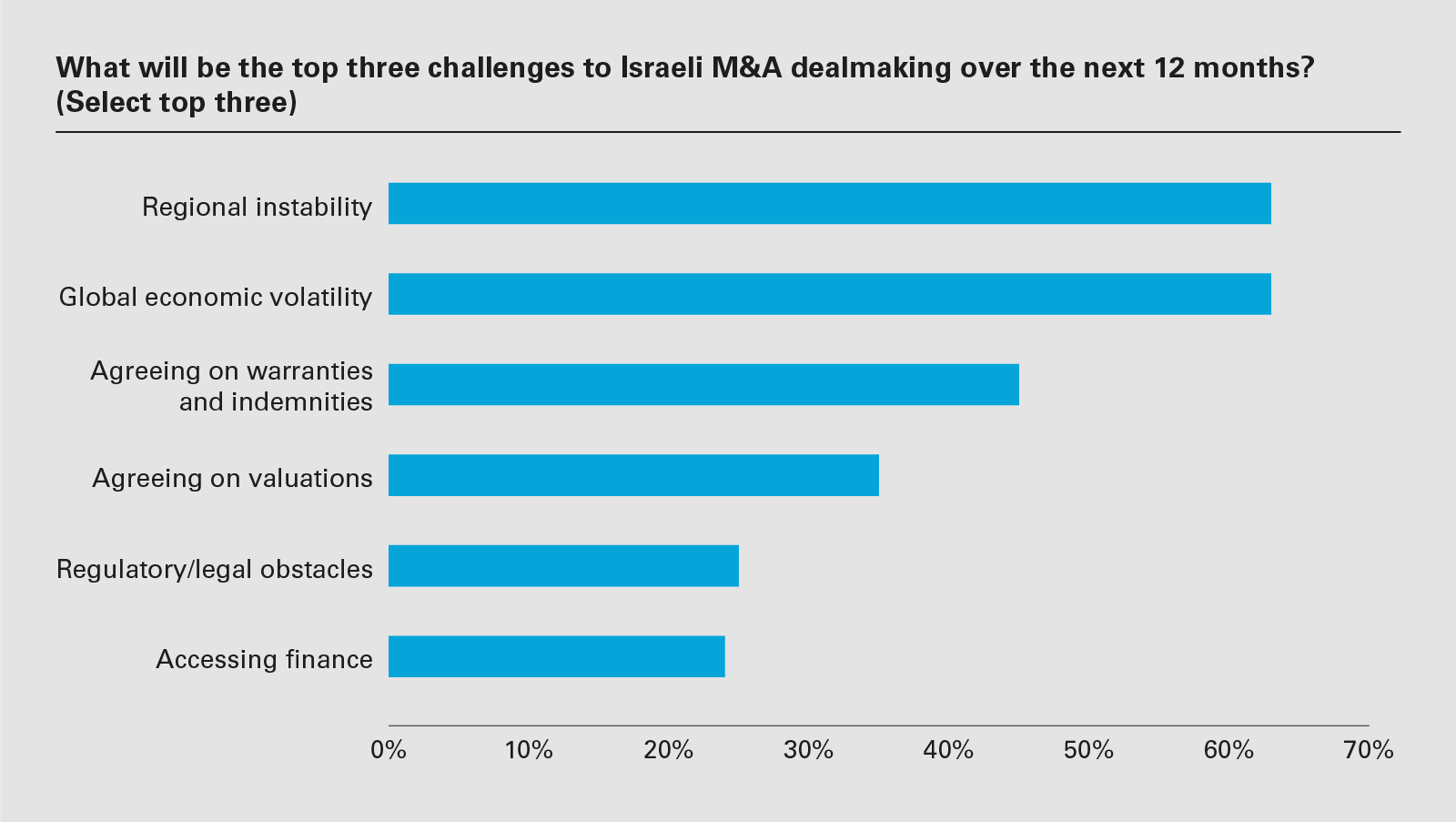 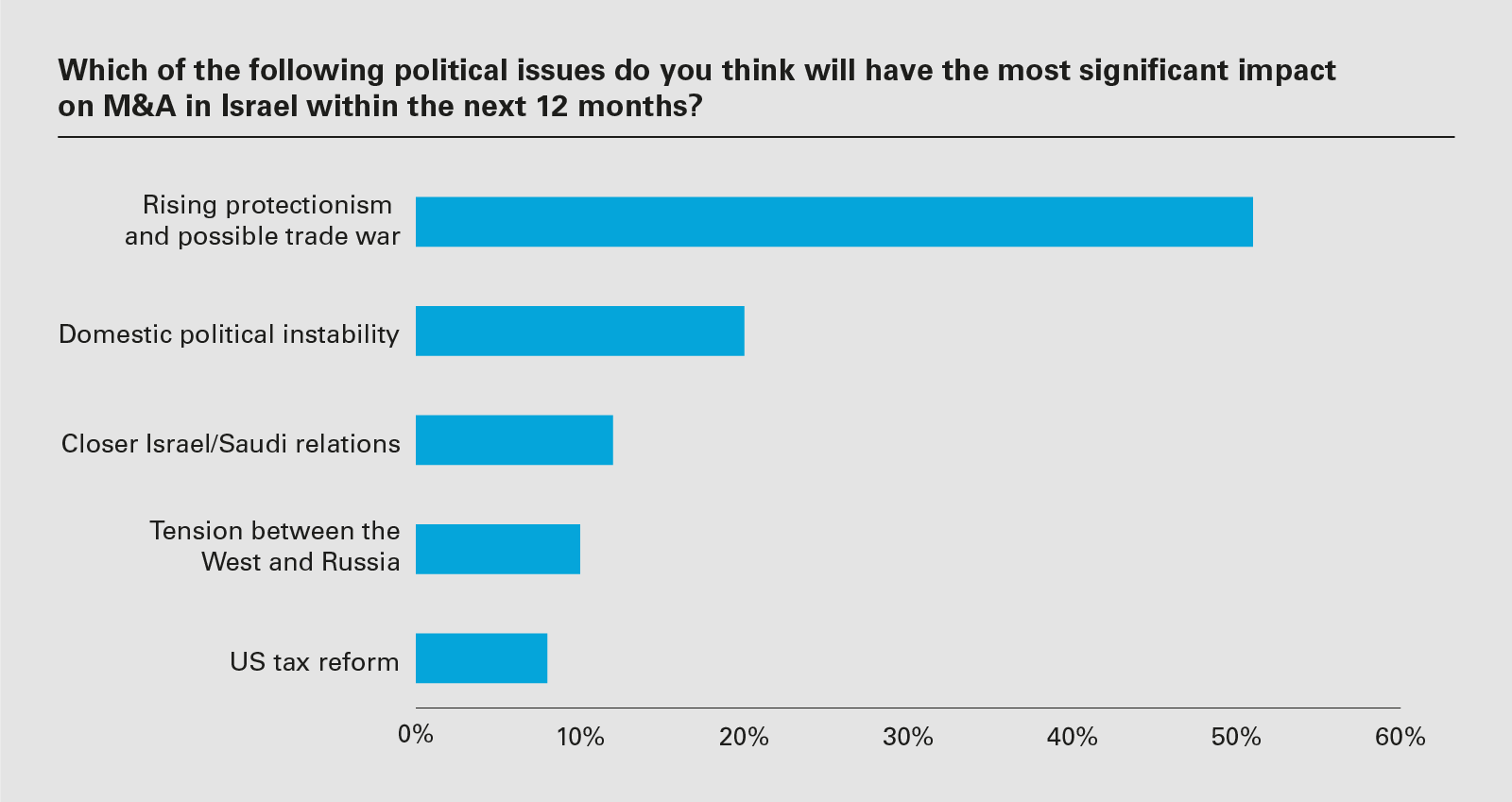