The robust funding environment and expectations of increased investment reflect the aviation industry's strong aggregate performance. In large parts of the sector, both liquidity and capital remain unconstrained, not least in an era of historically low financing costs.

However, this rosy picture is far from universal. Many airlines have reported significant liquidity issues in recent months, and airline insolvencies have been frequent, taking place in all three regions covered by this research.

More than two-thirds of survey respondents (67%) believe the aviation finance sector is now short of the capital and liquidity it currently requires. That rises to 80% in APAC, and majorities in both EMEA and North America agree. "We just do not have enough given the growing demand for funding," says the Director of M&A at a North American leasing company. "Growth has increased in line with economic growth, but other issues have restricted finance providers' ability to meet the demand." 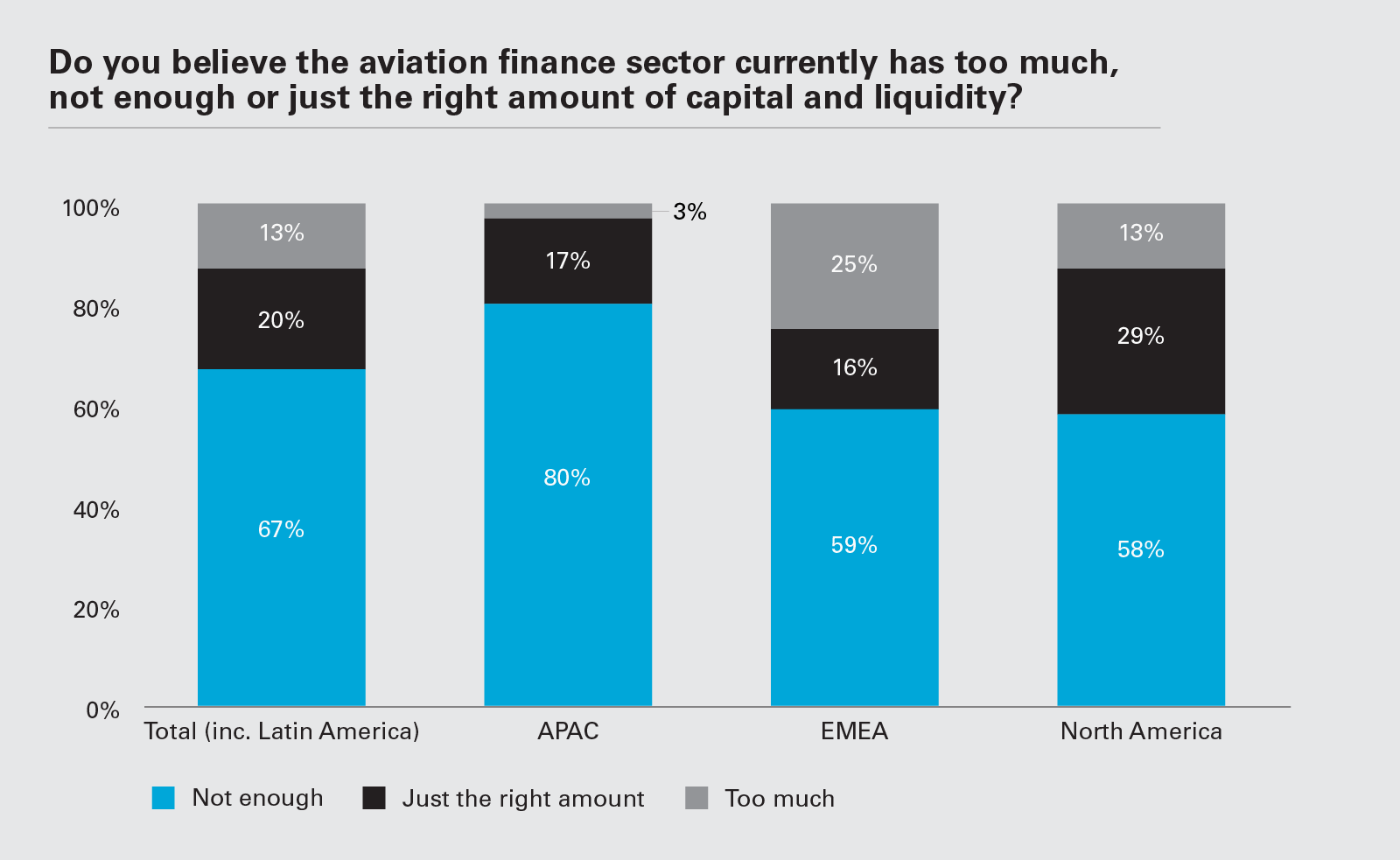 Do you believe the aviation finance sector currently has too much, not enough or just the right amount of capital and liquidity? (PDF) 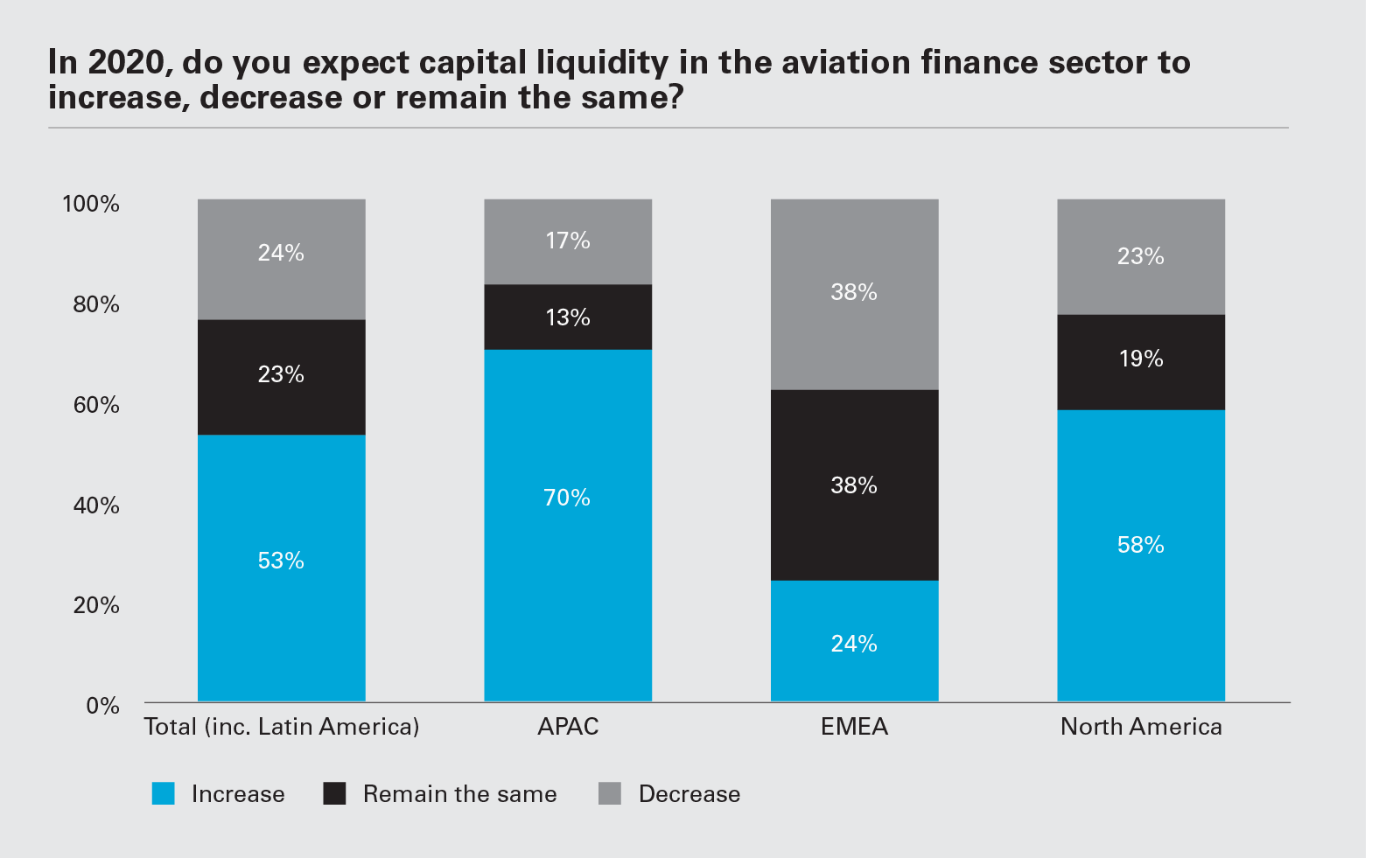 In 2020, do you expect capital liquidity in the aviation finance sector to increase, decrease or remain the same? (PDF)

This result may be surprising, considering the wide availability of cheap financing in recent years. During this period, airlines have been paying minimal margins on their capital. Nonetheless, banks have continued to operate in the market, indicating that rates of return in other sectors remain low.

The good news for airlines is that, despite the darkening global economic outlook, the near-term availability of financing does not look set to decline significantly in most parts of the world. Only in the EMEA region do less than half of respondents expect capital liquidity in the aviation finance sector to improve during 2020.

Europe's current difficulties—facing ongoing political turmoil (with Brexit to be negotiated and other uncertainties) as well as economic difficulties in France and Germany, the leading lights of the eurozone—are no doubt to blame. Particularly in APAC, but also in North America, expectations for funding over the year ahead are much more bullish.

Still, respondents would like to see the pace of improvement quicken. "It will take some time: Factors such as Brexit, the trade war and fuel shortages will all come into the picture," says the Director of Finance at a North American airline.

Historically low interest rates continue to offer the sector a golden opportunity to reduce its financing costs. While interest rates had been expected to begin rising in the US, the US Federal Reserve actually cut the cost of borrowing three times over the course of 2019—and some analysts think further reductions could be possible during 2020. In the UK, the eurozone and Japan, policymakers appear to be no closer to returning to more normal rates.

Many aviation sector borrowers have already taken advantage of this climate by seeking to refinance existing debt at lower rates. At a global level, 83% of respondents report having done this over the past 12 months, with nearly half of that number having refinanced significant amounts of their debt. 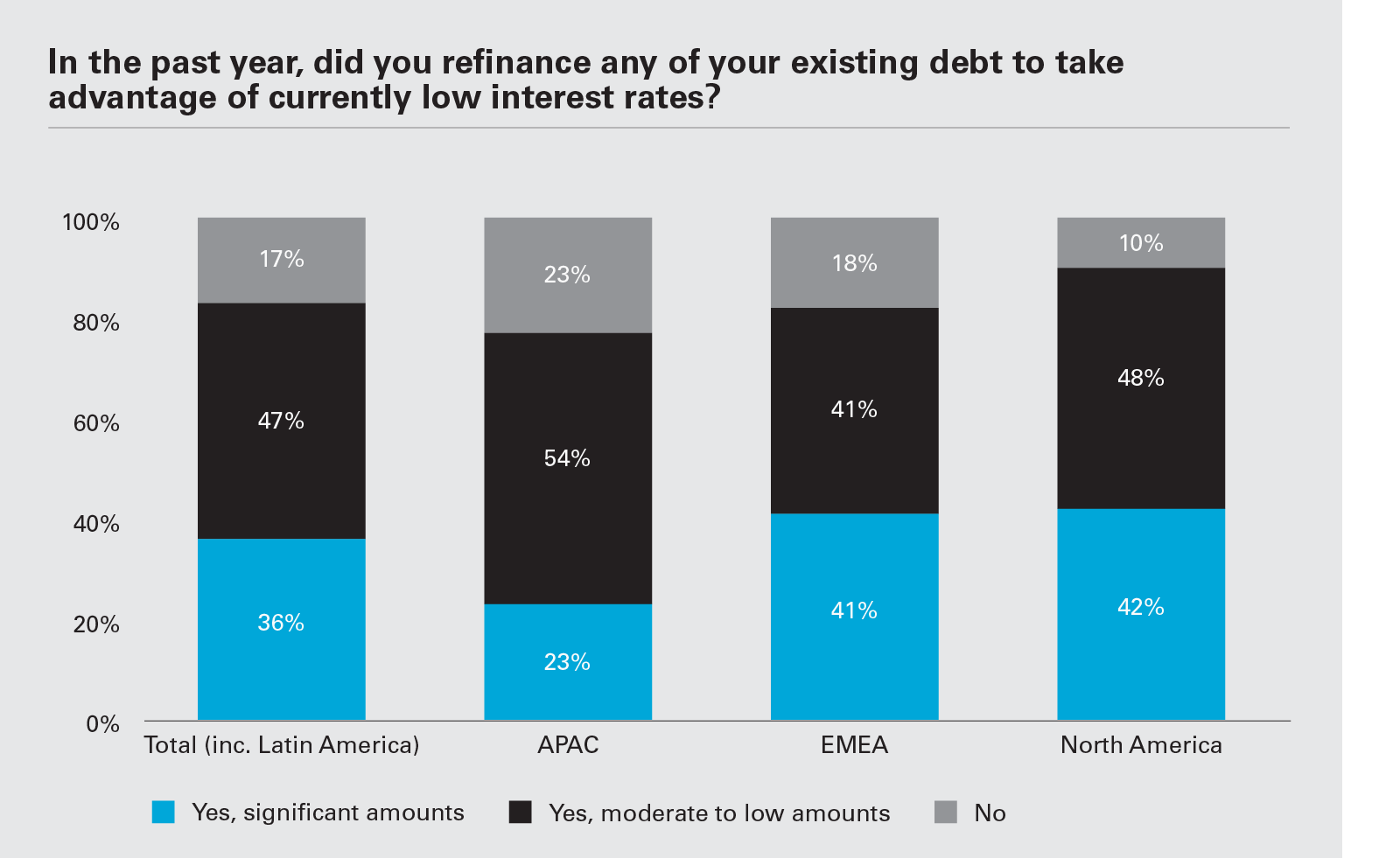 In the past year, did you refinance any of your existing debt to take advantage of currently low interest rates? (PDF) 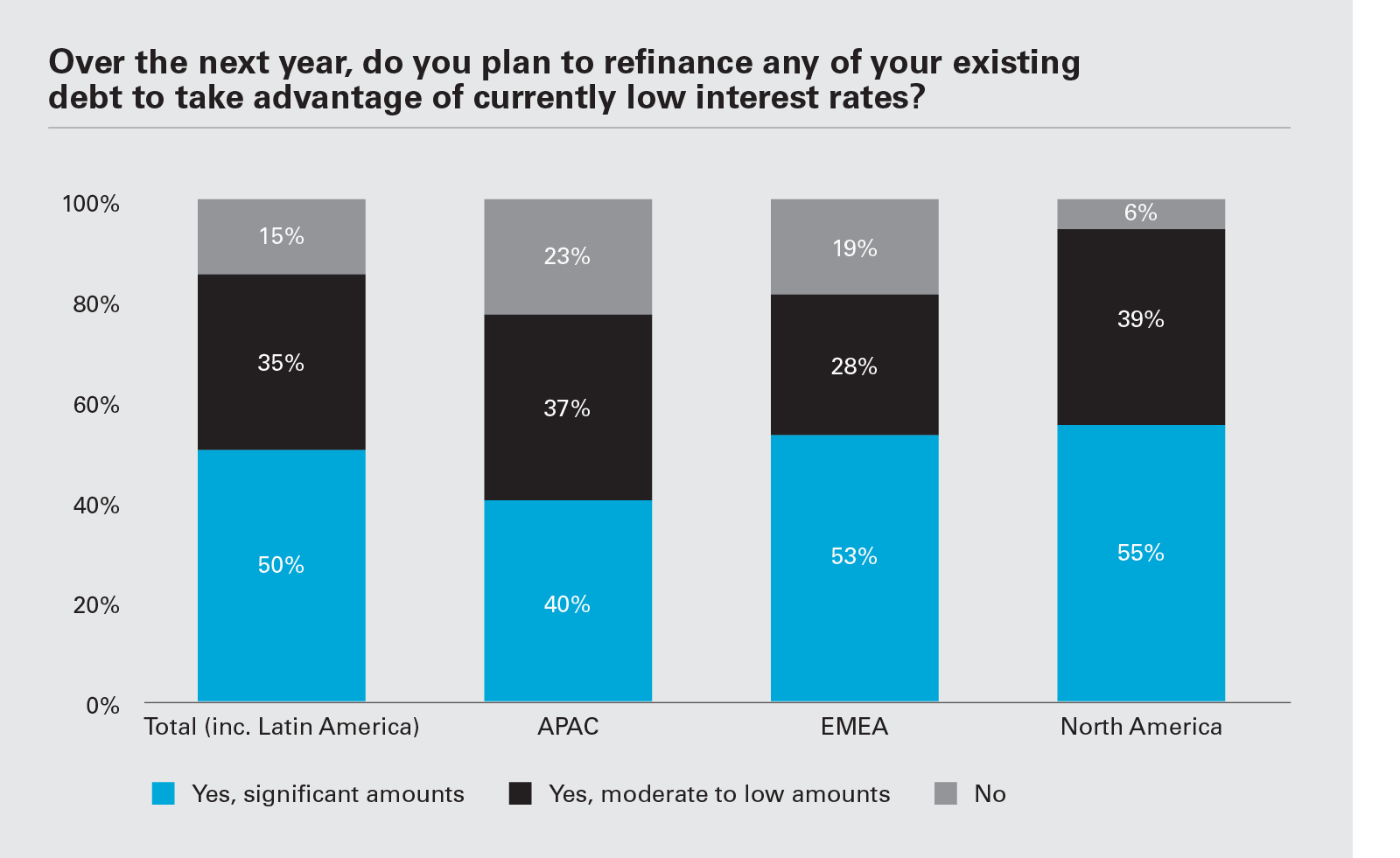 Over the next year, do you plan to refinance any of your existing debt to take advantage of currently low interest rates? (PDF)

This trend will likely continue in 2020—and, if anything, accelerate. 85% of respondents expect to refinance at least some amount of existing debt in the next year. In every region surveyed, a larger proportion of respondents anticipate refinancing "significant amounts" of borrowing rather than "moderate to low amounts."

In addition, many in the airline sector report that they either took on new borrowing during this remarkable period for interest rates or plan to do so over the next year.

In APAC every single respondent said they had opened new lines of credit or other debt facilities in the past year—and almost all expected to take on further new borrowing during 2020. The appetite for additional borrowing was slightly more muted in North America and EMEA in the past year, but demand for debt is now set to increase in both regions. Not only do North America and EMEA respondents expect to take on new debt in greater amounts during 2020, but also more of them intend to add significantly to their borrowing facilities. 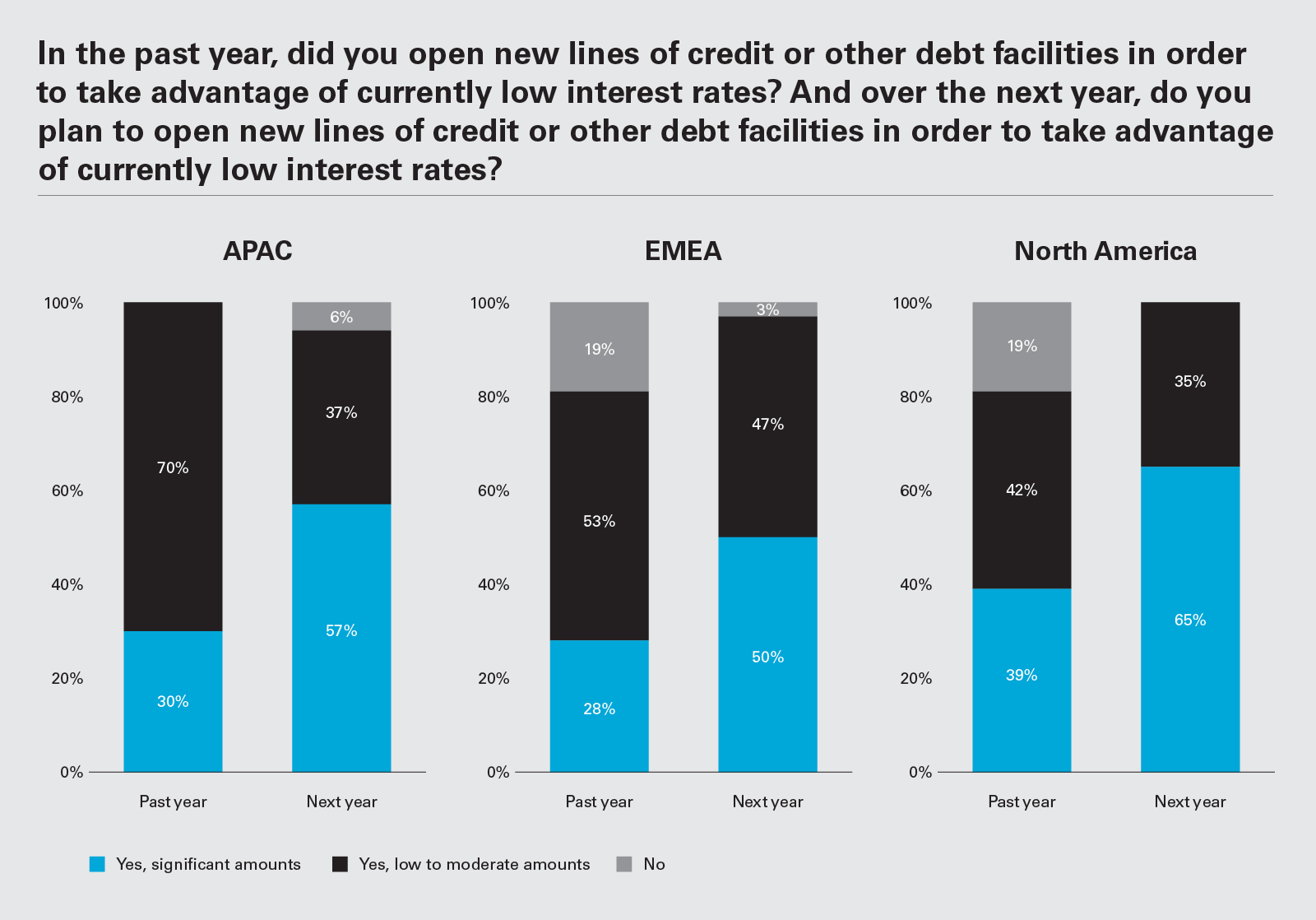 Other financing avenues will be important, too. For instance, there is a large tax leasing market in the APAC region, which is typically more active than the region's ABS market.

In some cases, the desire to refinance and take on fresh debt reflects an opportunity to further improve one's balance sheet from a position of strength. In other cases, though, it reflects the difficult circumstances many airlines find themselves in, with other airline failures likely in 2020. Some airline business models do not leave a lot of room for error. The low-cost carrier model, for instance, has come under some pressure, and many do not have a lot of cushion in case of unexpected developments.

Overall, two-thirds of respondents (67%) expect airline restructurings and insolvencies to increase over the year ahead. EMEA-based respondents are especially downcast, with 84% predicting a more difficult year in this regard. By contrast, only 53% of respondents in APAC say the same. The European market is particularly open and fragmented with exceptional levels of competition, all of which make it challenging to sustain profitability.

The Managing Director of a North American private equity firm says more restructuring is inevitable. "Changes in the global environment have taken a toll on many sectors, and aviation is no exception," the executive says. "Mergers, strategic partnerships and restructurings are all increasing as airlines try to strengthen their operations and reduce costs."

"There will be an increase in insolvencies during 2020 as profit margins fall," the Senior Director of Strategy at a North American airline adds. 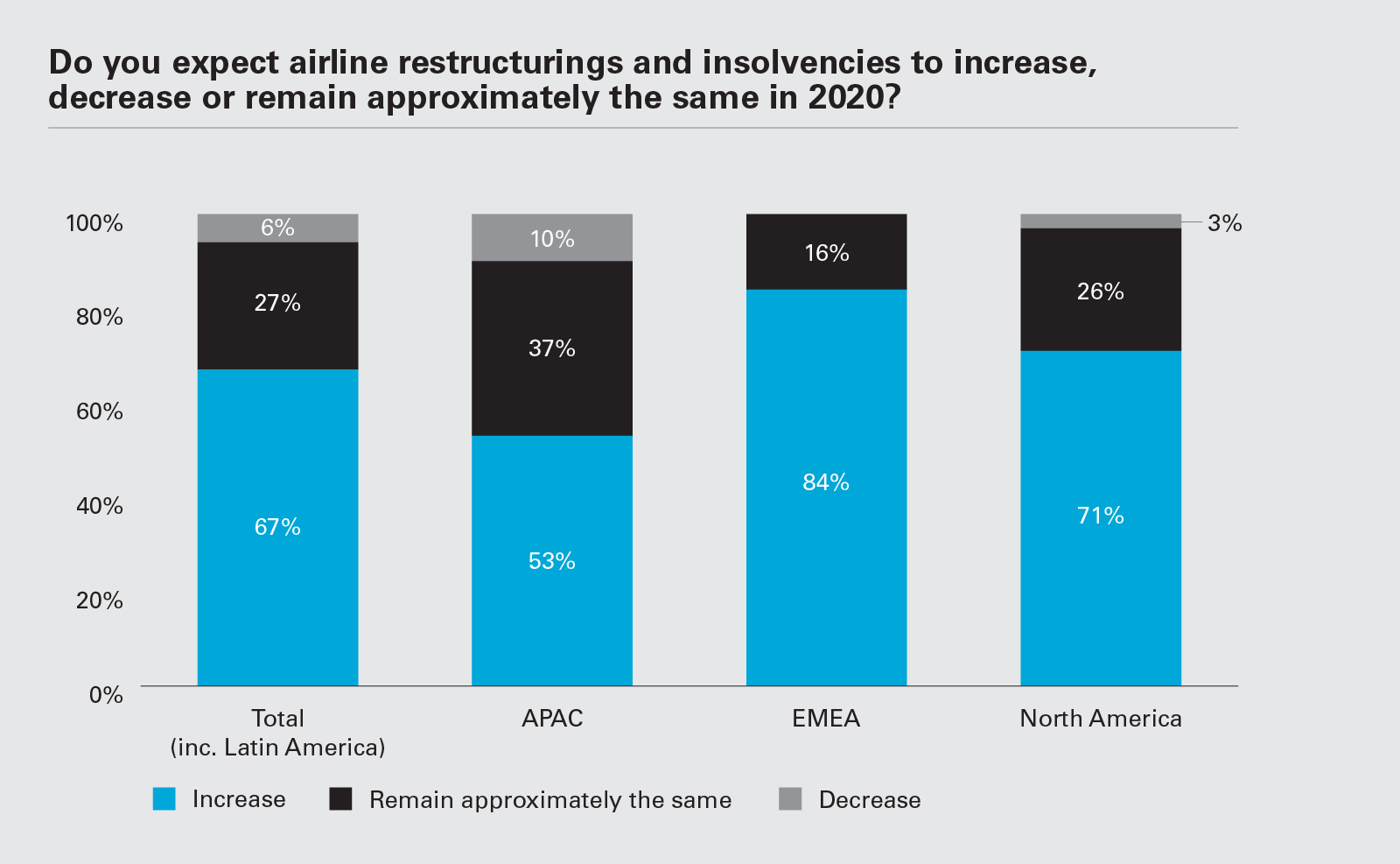 Do you expect airline restructurings and insolvencies to increase, decrease or remain approximately the same in 2020? (PDF)
Click here to read the full magazine
Navigating turbulence