The larger diversifieds delivered sizeable returns for shareholders in 2017, with the promise of more to come. But what does the overall picture look like for 2018?

If one thing characterised 2017, it was that mining companies were able to make money again. But will this trend continue in 2018? Rebecca Campbell and John Tivey, partners at global law firm White & Case, explore.

Thanks to surging commodity prices driven by robust global economic growth and the gathering pace of the green auto revolution, mining equities outperformed the broader market for the second year running.

The larger diversifieds delivered sizeable returns for shareholders via significant dividend payments and share buybacks, with the promise of more to come this year. But what does the overall picture look like for 2018? To get an idea, White & Case conducted a straw poll of 40 senior decisionmakers and asked them for their thoughts.

Responses from our survey illustrated confidence that the recovery cycle is firmly established. Growth and M&A are back on the agenda. One respondent said: "Rising prices will promote some asset development…companies [will] raise capital to execute these expansions." But the expectation is for measured activity coupled with ongoing capital discipline, as investor confidence cannot be taken for granted.

Paul Gait, an analyst at Sanford Bernstein, said: "Some of the 2017 story was about investors closing down short positions in the sector. Now the talk is about the general funds rotating back to mining in 2018, at least to some extent." As for specialist funds, Gait said there were those still looking at minerals linked to rechargeable lithium-ion batteries and electric vehicles (EVs)—copper, cobalt, lithium and nickel.

The 2017 backdrop is certainly encouraging. Many metals recorded prices at multi-year highs, not least as interest intensified in EVs and rechargeable batteries. The price of cobalt doubled and lithium posted a 2017 gain of about 35 per cent. Copper and nickel—integral to the chemistry of rechargeable batteries—benefitted too.

Given strong economic growth in the US, the eurozone and Asia, it should come as no surprise that the industry is targeting growth in selected areas.

The current cycle is demand-driven and about supply constraints in particular areas (copper especially), rather than about a huge upswing in consumption which characterised the China-led boom in the decade to 2012. So there is an air of caution as well as optimism that should, in many but not all cases, translate into a measured supply response.

Our survey showed more than 57 per cent of respondents believe that mining equities will outperform the broader market for the third year in a row. Only ten per cent forecast underperformance, while 32 per cent reckon mining equities will perform in line with benchmark indices. One respondent said the junior sector should do well with the development of more exploration projects "that will create a buzz and more people will pile in". 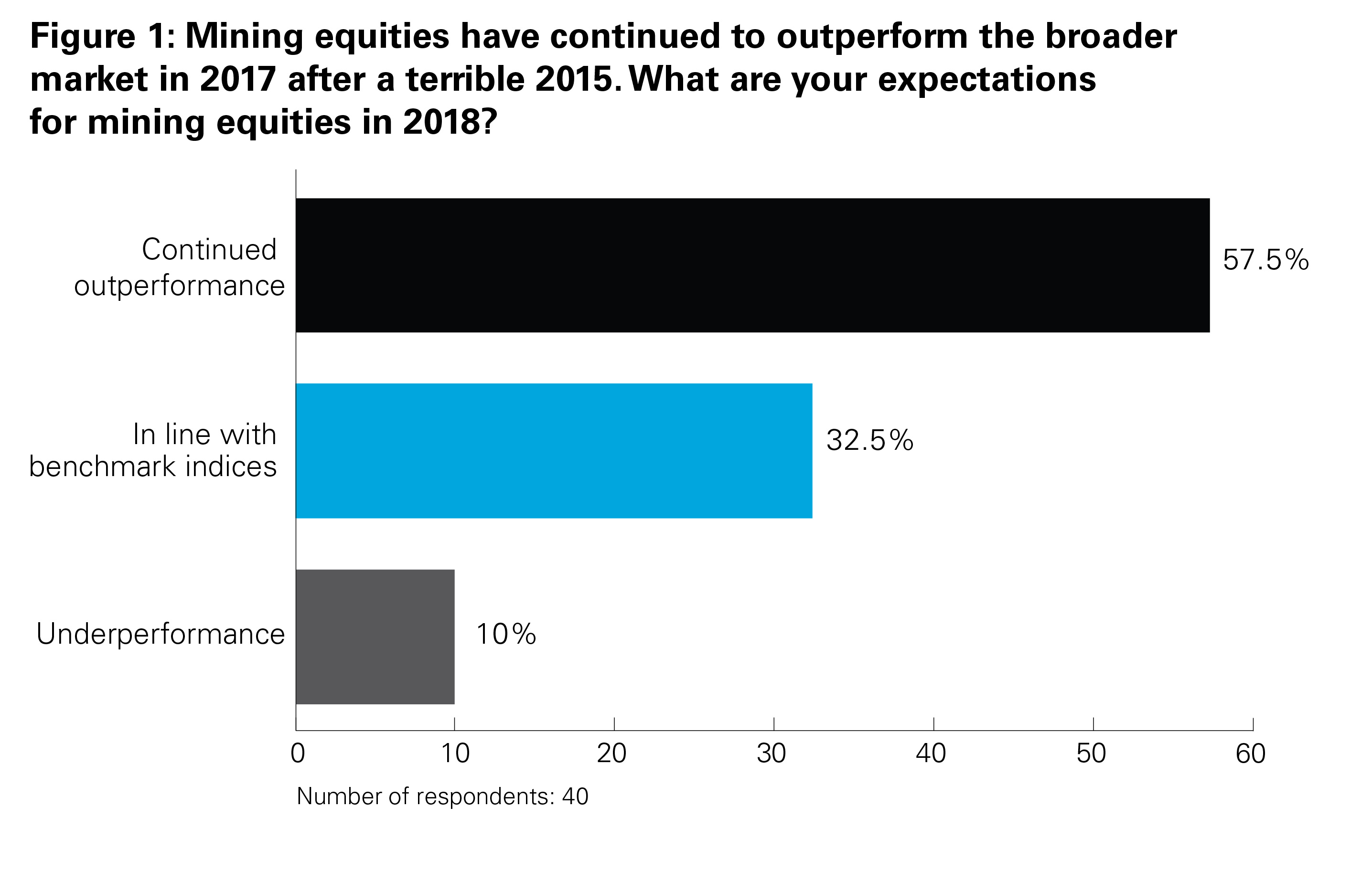 For sure, 2017 showed that growth was back. The London Stock Exchange reported that IPOs were at a three-year high, with 106 groups floating, raising £15 billion, up 164 per cent by value. According to a report by Bloomberg, one of the best performing funds, the Commodity Capital Global Mining Fund, racked up returns of 106 per cent in 2017. Now the fund was said to be seeking out juniors in safe jurisdictions with solid reserves, according to Bloomberg.

Mining M&A activity totalled US$96.8 billion during 2017, a 10 per cent increase over the value of deals in 2016, according to Thomson Reuters Deal Intelligence. More than US$92 billion of the 2017 total was spent on coal, iron ore and steel deals. Reuters said some analysts remained bullish on coal, believing China and India would continue to rely on coal for years to come.

Responses from our survey also demonstrate confidence that growth is at last returning.

With supply deficits forecast in metals such as copper and cobalt going forward, respondents are anticipating expansion in 2018. One said: "Clients are more in a mood to invest in capital expenditure to sustain development, which provides more opportunities for structured finance and advisory".

Asked to rank the priorities of the major diversifieds this year, dividends and buybacks were top at 32 per cent, but capital spending on expansion in selected areas wasn’t far behind at 30 per cent. 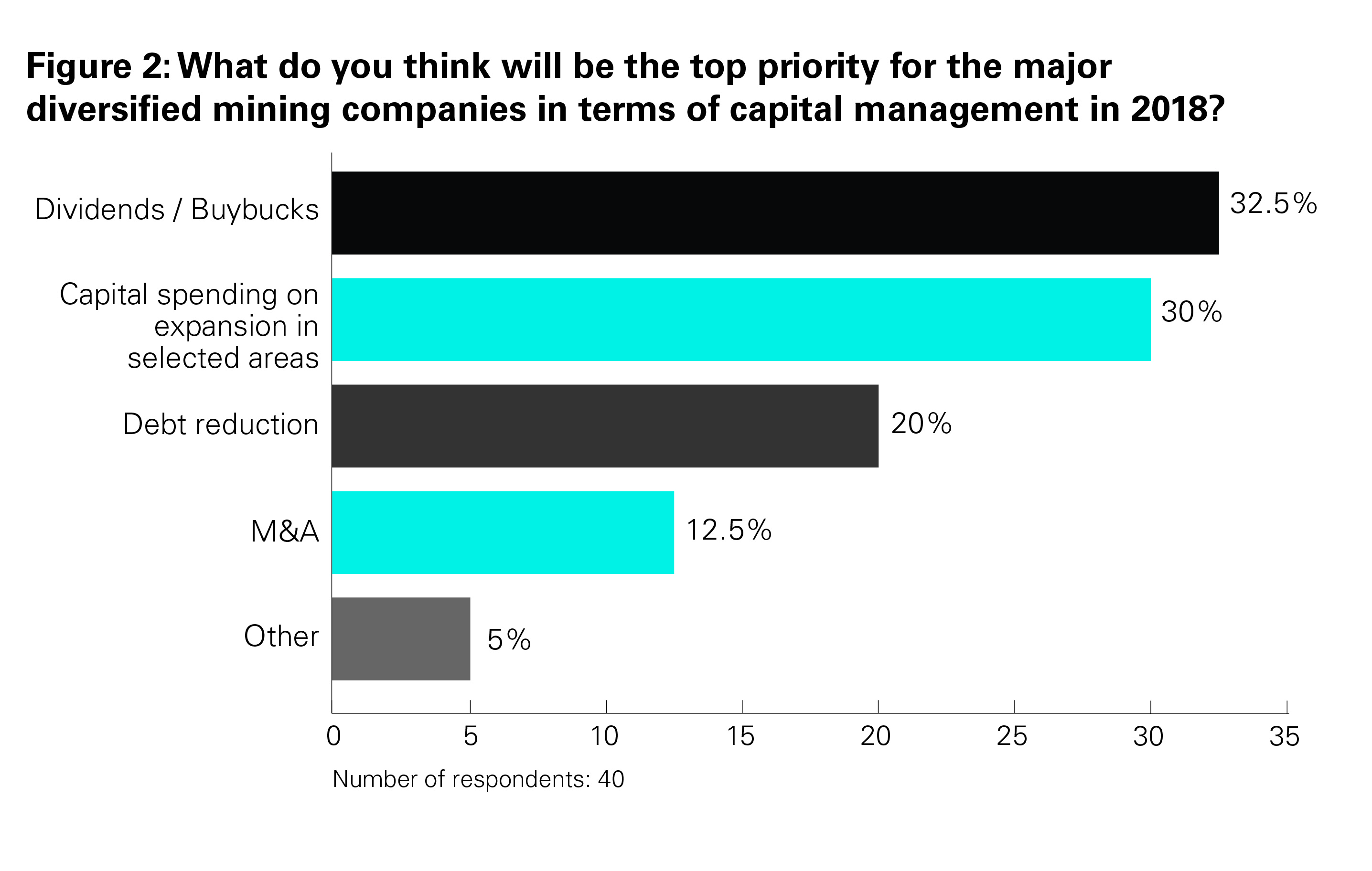 When asked what the industry would choose in the next growth phase, there was a tie, with 42 per cent of respondents plumping for M&A, and the same figure for brownfield development. 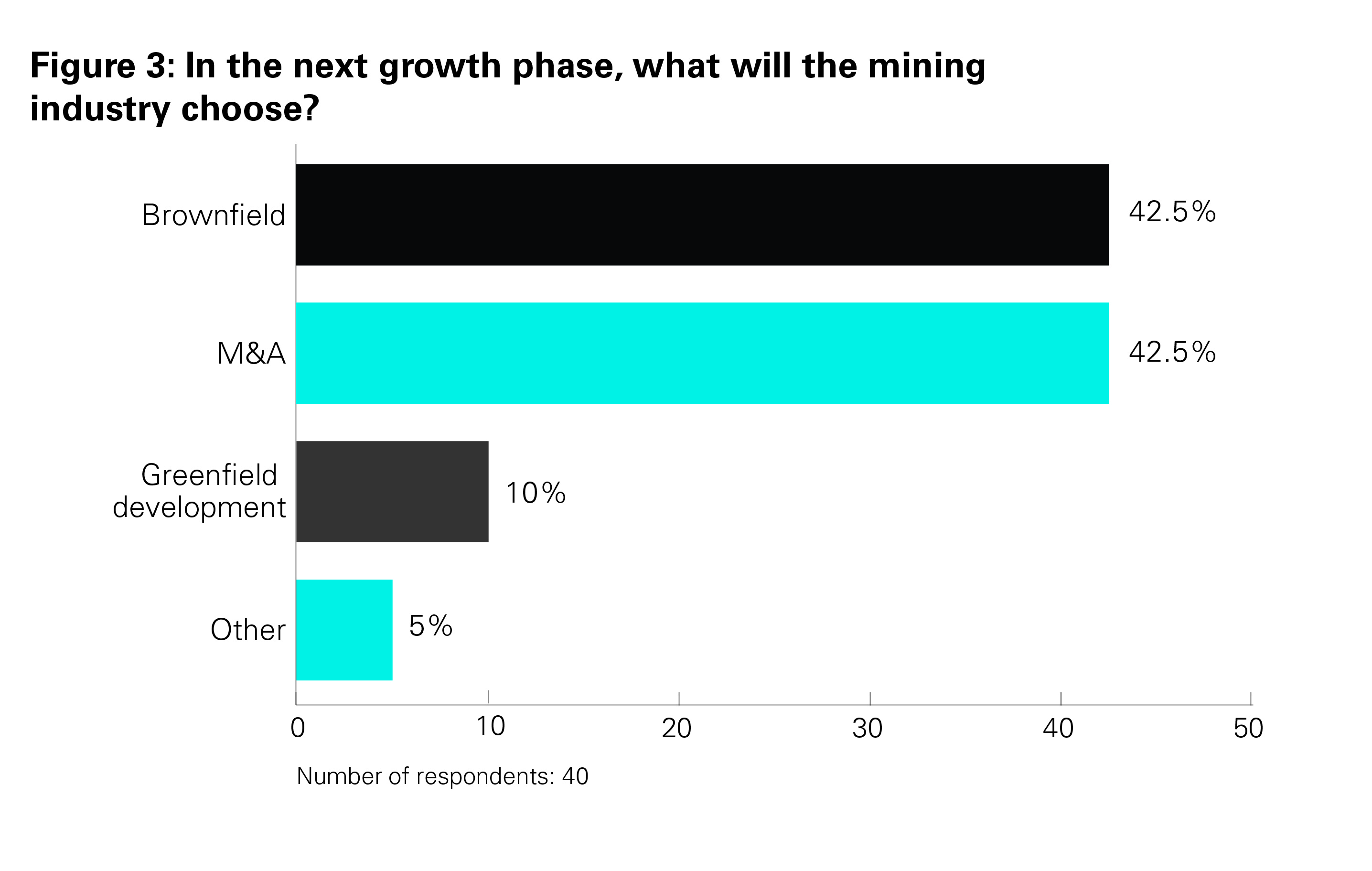 When asked in which area the 2017 rally would spur growth this year, respondents were split evenly between M&A, IPOs and capital raising. Asked what type of M&A would be prevalent in 2018, 80 per cent said ‘opportunistic asset-driven deals,’ with only 3 per cent expecting hostile approaches. 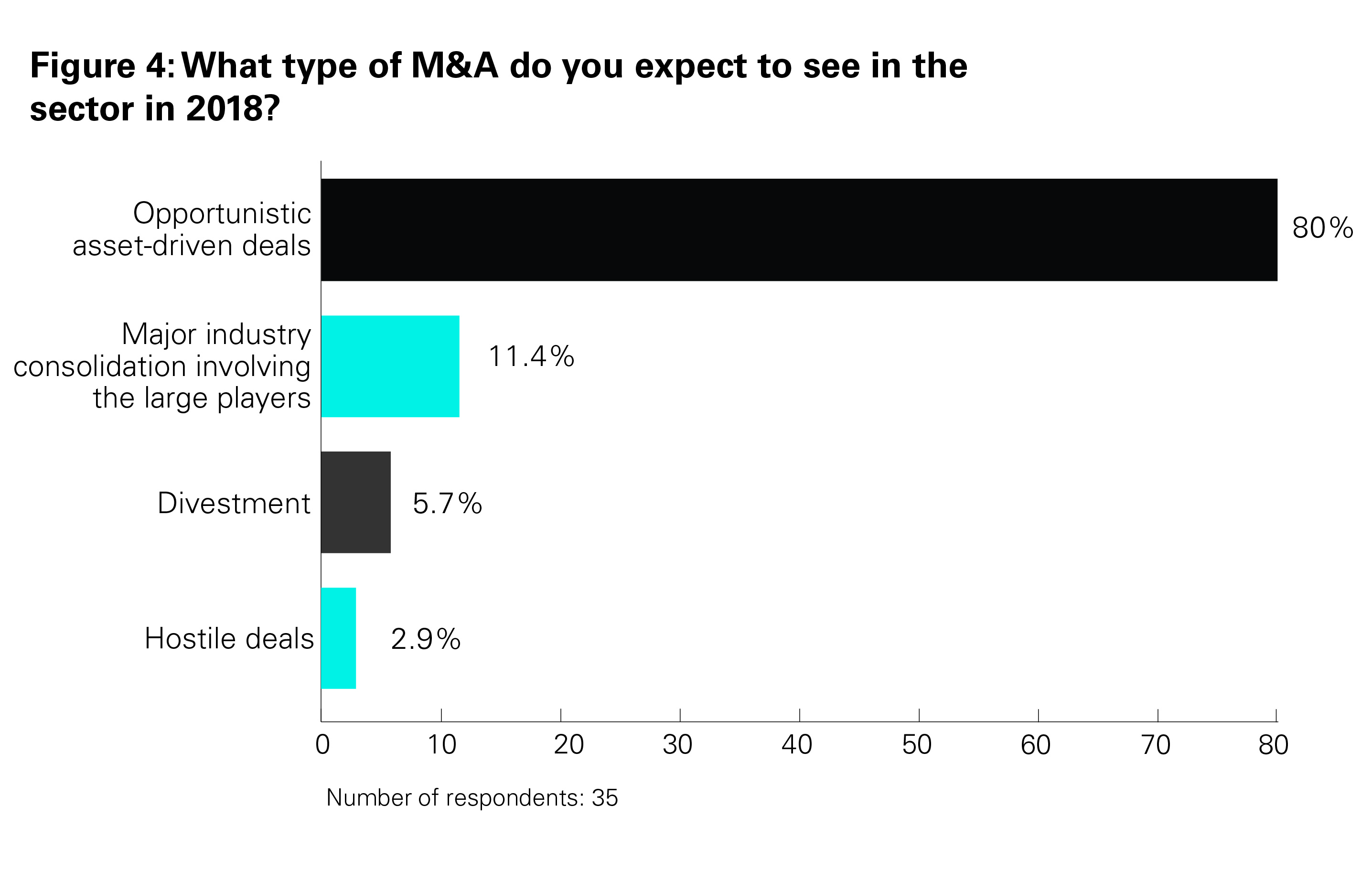 Private equity is still expected to be active even though the market bottomed some time ago. Our survey showed 39 per cent believe PE will continue to feature in M&A at the same level as 2017, while 36 per cent thought it would be more active.

Corporate activity of a different kind is almost certain to see an upswing in 2018: a rush by car companies to tie up supply deals with those miners producing lithium and other minerals—such as cobalt—viewed as a vital for EV car batteries.

One of the big stories in this space in 2017 was the attempt by Volkswagen to secure a long-term supply agreement for cobalt to underpin its plan to enter the mass market for electric cars. But so far there haven’t been any takers, with disagreements reported over price.

Morgan Stanley expects global car sales to rise by 50 per cent by 2050 and estimates that EVs will account for most of that total. With that in mind, it should come as no surprise that Chinese automaker Great Wall Motor Co. last year acquired a stake in Australian lithium miner Pilbara Minerals in September, paving the way for a binding off-take agreement completed in December—shoring up lithium supply for Great-Wall for the foreseeable future. That development won’t have been missed by western carmakers, so watch this space in 2018.

Given the strength of the recovery in 2017, perhaps it is not surprising that more than 52 per cent of our survey respondents are expecting a supply response from miners this year. Asked which minerals were most susceptible to a ramp-up, nearly a third chose copper—the price was up by about 20 per cent last year. Goldman Sachs switched its forecast from a supply surplus in copper in 2018 to a 130,000-tonne deficit.

In our survey, respondents reckoned lithium would again be the hot commodity of the year (35 per cent), but copper was equally popular, also at 35 per cent. 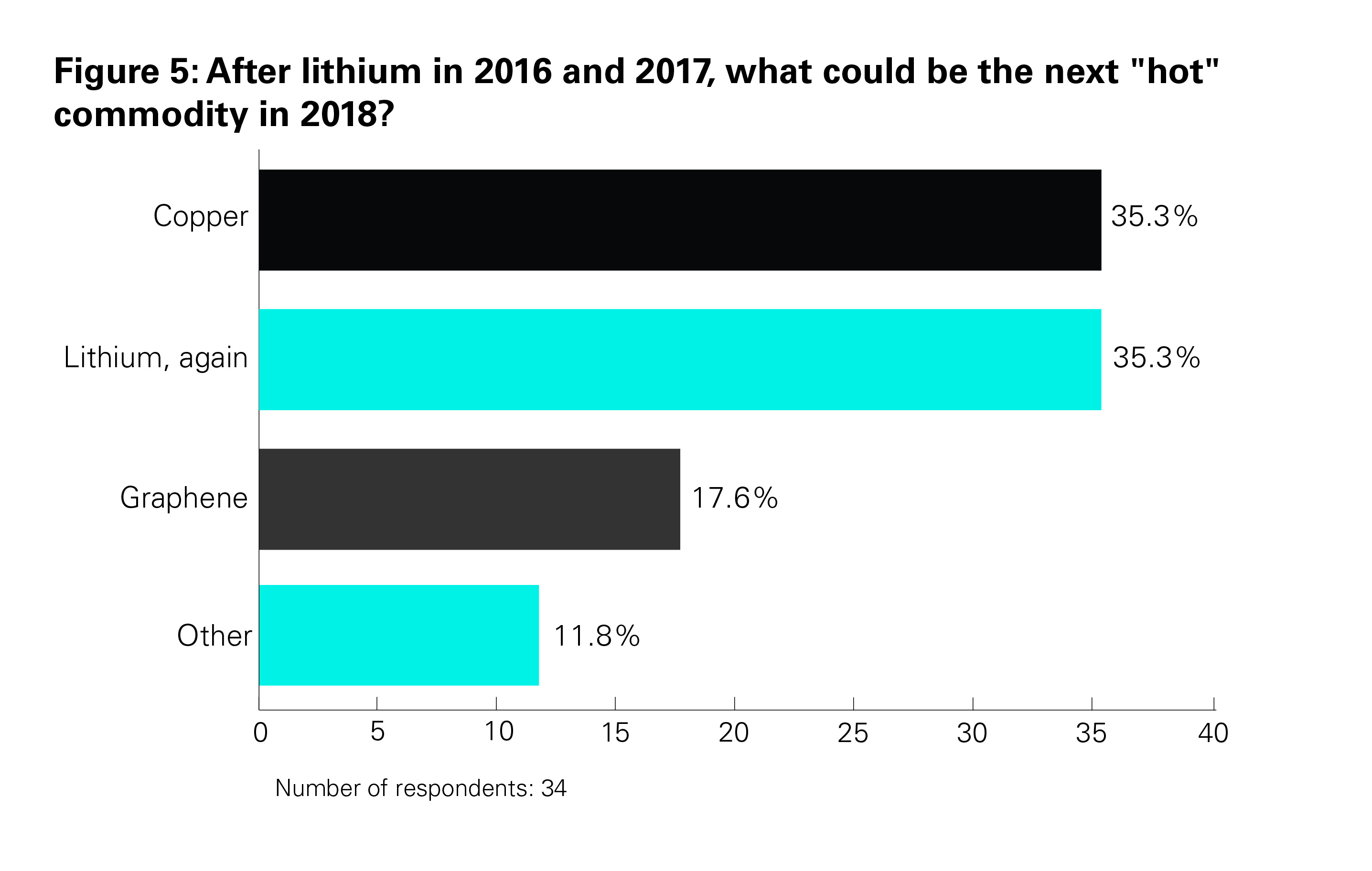 Nickel is a big story, too. Wood Mackenzie expects the boom in EVs to bring a structural shortage in the nickel market between now and 2025 —with demand expected to grow from 40,000 tonnes to 220,000 tonnes in 2025.

There is an expectation that battery makers will increasingly look at nickel as a cheaper and easier-to-source alternative to cobalt—more than 60 per cent of which is produced in the politically unstable Democratic Republic of Congo (DRC).

The DRC link has already had consequences for corporate governance and business ethics. Following complaints by traders, the London Metal Exchange is investigating whether cobalt mined by child labour in DRC is trading on the exchange.

When it comes to looking at risks facing companies in 2018, our survey found—unsurprisingly—most respondent saying price stability was their biggest worry. But resource nationalism was also high on the list of risks after a year in which Acacia Mining, owned by Barrick Gold, was hit by a bill for unpaid taxes and fines by the government of Tanzania. The dispute, which also affected Petra Diamonds, was resolved in October.

In Indonesia, Jakarta continues to back measures to take more control over its natural resources and persuade miners to build smelters to increase indigenous production.

South Africa also faces challenges. The government wants miners operating in the country, including South32, Anglo American and Glencore, to permanently increase stakes held by black shareholders to 30 per cent or more to redress post-apartheid inequality in the industry. The move has been challenged by the industry and is currently suspended pending a High Court hearing now scheduled for February.

Looking at individual minerals, palladium was one of the best price performers in 2017 amid concern about pollution from diesel vehicles which depend more on platinum.

The dire market for platinum (the price has fallen 45 per cent in five years) culminated in 2017 with the curtain coming down on platinum producer Lonmin. The group accepted a takeover from SA miner Sibanye-Stillwater. But now there is talk that after the rise in price of palladium last year, some carmakers could switch back to platinum as a potentially cheaper substitute.

But it’s what happens in China—consumer of half the world's raw materials—that matters most in 2018. Citigroup says "China's moves to curb pollution and shrink an oversupply as well as cut bloated capacity may tighten iron ore and zinc markets".

Asked how they thought the Chinese market would play out this year, 34 per cent of respondents said steady growth would underpin prices, while 28 per cent said policy changes would dampen price growth. But more than 37 per cent expected Chinese performance would be similar to 2017. 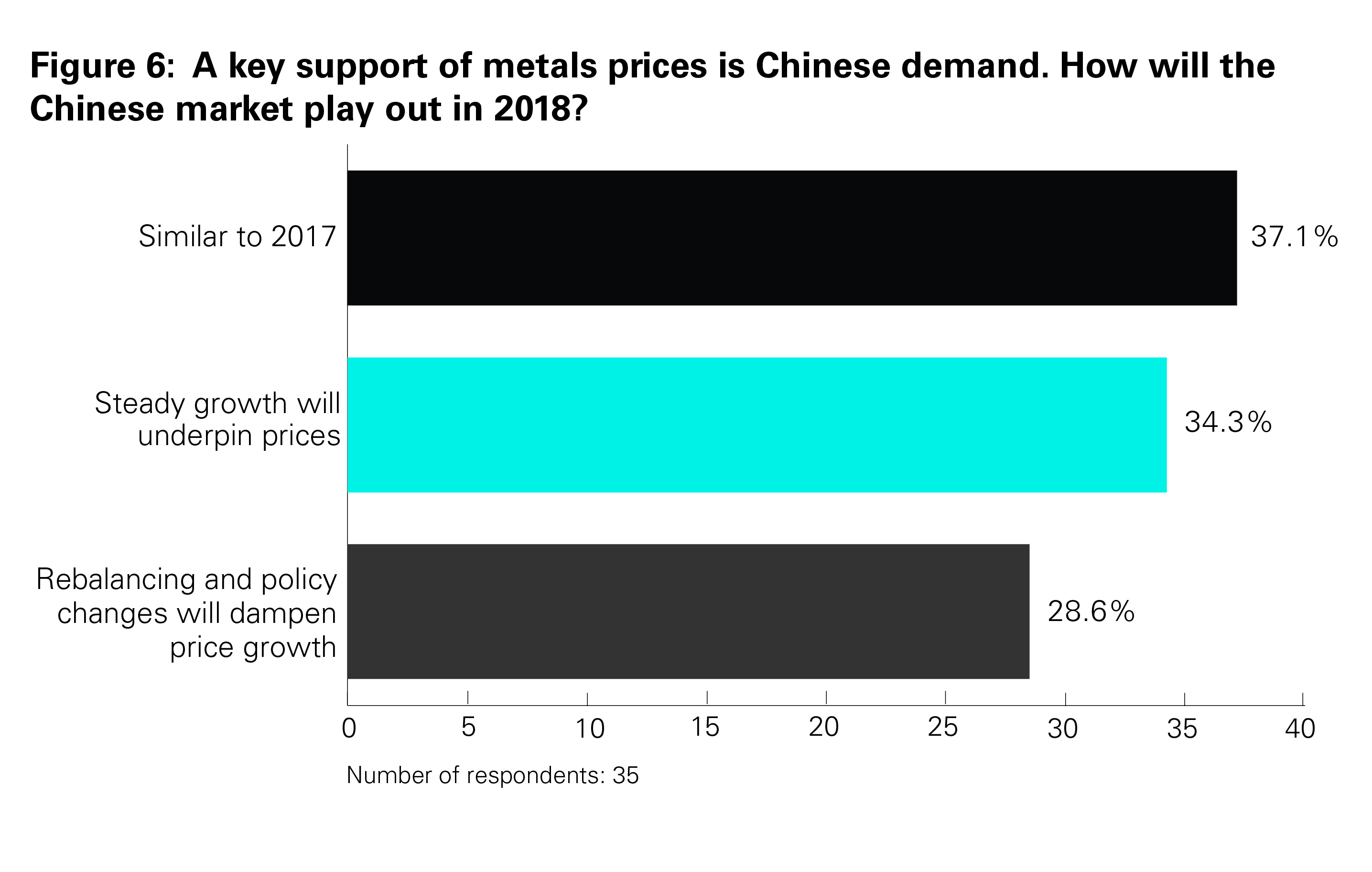 Aluminium saw strong price growth amid China's efforts to clean up the environment, which reduced the supply of the lightweight metal, a development that is expected to see the market outside China register a significant deficit in 2018.

The price of iron ore swung wildly between US$50/t and US$90/t as uncertainties about Chinese growth ebbed and flowed, but it closed the year at about US$70/t, higher than expected amid hope that China will need to import more higher-grade (and less polluting) ore. But BMI Research has forecast that oversupply and less demand from China will cap prices this year at about US$50/t.

During 2017, Rio Tinto and BHP recorded their best share price performances in years, as recovery took hold: Rio Tinto's operating cash flow grew to US$13.9 billion in 2017. UBS has predicted healthy cash returns from miners in 2018. "We expect China's focus on reform and pollution to remain through 2018 and together with producer discipline outside China, we expect elevated commodity prices, and with that healthy profits and increased returns," UBS said.

As always, there are possible headwinds. Substantive new lithium projects in South America and Australia could end the shortage in the market by 2019, and oversupply will follow, according to Bank of America Merrill Lynch.

Glencore, which is set to double cobalt production from its Katanga subsidiary in DRC, could put the market into a surplus in 2019, according to consultancy CRU. Bigger concerns turn on whether Chinese growth could stall, or whether stock markets in developed countries could falter as interest rates rise after years of cheap money (although this would benefit gold).

One thing is for sure: 2018 will be anything but boring, as the industry enters the next cycle with renewed confidence, and at a time when ‘smart' mining offers scope to boost efficiency and productivity.

Blockchain, the technology better known for powering bitcoin, is viewed as a space to watch as the system can also be used by corporates, including miners, to create an unchangeable record of transactions along a supply chain that can cut costs linked to processing documents and administration. A number of pilot studies and joint ventures are underway, and some major developments are in the pipeline.

After battling for survival, at least in some cases, the mining and metals industry is now leaner and fitter than at any time since the downturn. It remains to be seen how and where its growing surplus cash pile is deployed in the next 12 months, but with the sector returning to growth, these are interesting times, although as unpredictable as ever.

View the full results of our survey