Clouds are forming on the horizon, however appetites for big-ticket deals have not yet diminished

After a very strong 2017—when M&A in the US reached its third-highest overall deal value since the financial crisis—deal value grew again in the first half of 2018. Compared to H1 2017, value rose 30.5 percent to US$794.8 billion when compared to the same period in 2017, while deal volumes held steady.

Activity has been brisk despite increasing macro-economic headwinds. The Federal Reserve recently raised interest rates and signaled its intention to do so again twice more before the year is out. Threats of a bourgeoning global trade war are intensifying after the imposition of tariffs by the US and other large economies. And the US stock market has experienced significantly higher volatility this year than it did last.

One could reasonably expect that M&A would cool against this backdrop, but the fact that it has not suggests that deals are going ahead for essential strategic reasons rather than opportunistic ones.

Technology and its disruptive impact across all sectors is one of the main factors that has made M&A a necessity. The impact has been most apparent in sectors such as retail and healthcare, where digital platforms are ideally placed to disrupt established service and distribution channels. No sector has been untouched, however. Unless non-tech companies have the resources in-house to write their own software and algorithms—and most do not—M&A may be the best option to keep pace with dynamic change.

We expect the second half of the year to be busy, but no one can afford to ignore the threats posed by rising interest rates, increasing protectionism, an incipient trade war that could increase tariffs, a potentially inverting yield curve, unsustainable pricing demands and a volatile stock market. Companies will need to navigate these dynamics if M&A's bull run is to continue.

First-half activity remains on par with 2016, as strong fundamentals continue to drive M&A

Despite intensifying competition within the market, US private equity activity is yet to show signs of a downturn

Technology M&A gets white hot in 2018

Despite a drop in headline figures, M&A within the US consumer sector remains an important method to secure long-term growth

Is blockchain M&A poised to accelerate?

US dealmakers are learning to navigate the complex world of blockchain M&A, but they will have to proceed with care in heavily regulated sectors

Decision time for M&A in Delaware

The number and severity of cybersecurity incidents at major companies has increased, causing regulators to take a tougher approach. We look at five practical steps companies can take to manage these risks

Key trends to watch in the months ahead

M&A's strategic importance as a tool for growth and corporate repositioning proved to be as crucial as ever in the first half of 2018. US businesses across all industries turned to dealmaking to open up new markets, respond to competitive threats and focus on their most profitable core activities.

After a near-record year in 2017 and despite escalating tensions surrounding global trade, rising interest rates and volatile stock markets, US M&A activity accelerated into the first half of 2018. Deal value for the first six months of the year jumped 30.5 percent to US$794.8 billion, while deal volumes held steady—only fractionally down to 2,593 transactions from 2,887 deals in H1 2017.

Economic conditions have supported deal activity. Although the Federal Reserve raised rates by 0.25 percent in June and signaled another two rises before the end of the year, interest rates are still low by historical standards. The US economy is growing at more than two percent a year and unemployment is at 3.6 percent. These strong economic fundamentals continue to favor M&A.

The reduction in the headline corporation tax rate to 21 percent from 35 percent has lifted profits and freed up cash for investment. Incentives to repatriate offshore earnings back into the US have created further inflows. Although the impact of limitations on interest deductions and the reduction of tax benefits on certain assets could still hit private equity (PE) and banks, the tax reform has improved overall business confidence. Strong balance sheets have served to boost activity between US-based firms, with domestic activity hitting an all-time high value of US$685.2 billion in the first half of 2018. 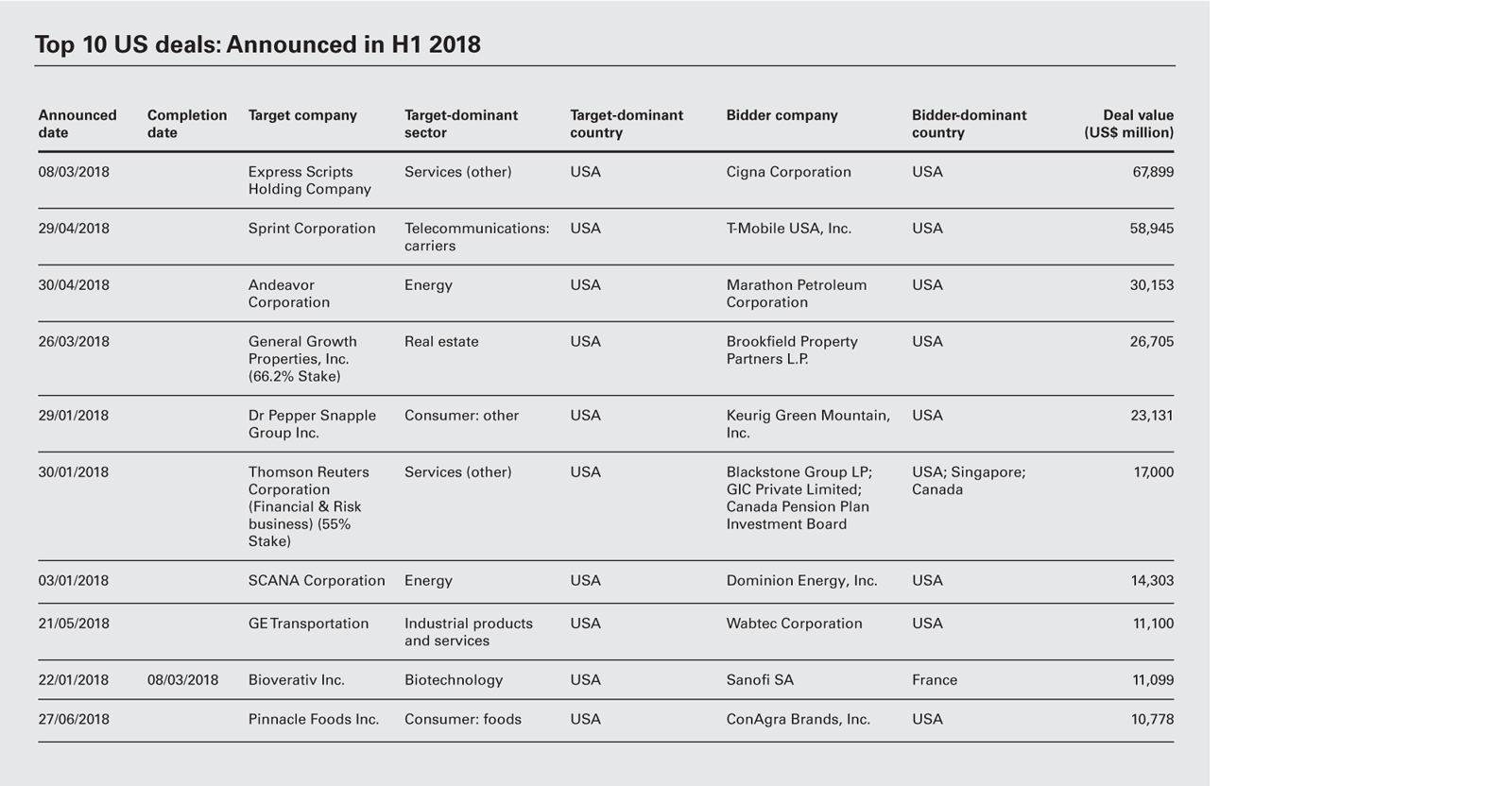 Momentum behind megadeals increased in the wake of two important developments related to the Department of Justice (DOJ). In May, the DOJ gave antitrust approval for the US$63 billion merger between Bayer and Monsanto. And in June, a court ruling cleared the way for AT&T's US$105 billion takeover of Time Warner, although the DOJ—which initially challenged the deal on antitrust grounds—has appealed the decision.

This high-profile case proves that the DOJ and FTC must present credible evidence of harm to courts and may make the current administration think twice before pushing the boundaries in merger reviews. As such, it may present opportunities for deals that were shelved for fear of aggressive (or political) antitrust enforcement and demonstrate that courts have a clear preference for mainstream antitrust enforcement. The potential loss in AT&T, however, will not halt antitrust enforcement: Parties can expect that large mergers, including vertical transactions, between close competitors will continue to receive close scrutiny.

Major strategic realignment across the healthcare, retail and technology sectors has ensured robust deal flow. Deals such as insurer Cigna's US$68 billion swoop for Express Scripts have been prompted by a period of regulatory flux and technological disruption. With Congress at an impasse over the future of the Affordable Care Act and Amazon announcing a partnership with Berkshire Hathaway and JPMorgan Chase to cover the medical needs of staff using technology-enabled services, established players have had to react and pursue scale and supply chain integration.

Despite the boom in domestic activity, dealmaking from overseas bidders faltered in the first half of 2018. A presidential order to block the hostile bid for Qualcomm from Singapore's Broadcom, on the recommendation of the Committee on Foreign Investment in the United States (CFIUS) that the deal could threaten national security, weighed on foreign appetite for US assets. This increased scrutiny appears to have spooked overseas buyers, with inbound M&A deal value down almost half (45 percent) to US$109.6 billion for H1 2018 and inbound volume falling 14.7 percent to 446 deals over this period.

Dealmakers from China, the third-largest inbound investor in the US less than two years ago, when it invested a record US$56.7 billion in US companies, have been particularly hard hit. Frictions in US-China relations, including trade tensions, national security concerns and the uncertainty over North Korea, have slowed review of Chinese deals by US regulators and even derailed a number of transactions. For example, the Qualcomm-Broadcom Transaction was delayed by US antitrust agencies and ultimately blocked, based on CFIUS's recommendation.

This has led Chinese investors to look elsewhere for deals. There have only been 22 inbound Chinese deals into the US in H1 2018 and the country is absent from the top ten inbound investors by value. The pain felt by Chinese buyers is benefiting PE buyers, who now have additional opportunities to bid for assets without fear of aggressive competition from Chinese investors.

The uptick in US domestic value suggests that large, cash-rich corporates with clear strategic rationales for big-ticket M&A have shrugged off market volatility. Yet the fact that deal volumes have remained relatively flat while deal values have climbed suggests that M&A is bifurcating into a busy megadeal market, where high deal premiums are the norm, as well as a more cautious mid-market.

Although M&A performance has been strong so far in 2018, dealmaking is facing more headwinds than it did a year ago. The Trump administration's decision to levy tariffs of 10 percent on aluminium and 25 percent on steel have raised the risk of a trade war between the US and the world's other large economies. And Trump's recent decision to launch a security investigation into automotive imports will serve to exacerbate global trade tensions. Protectionist posturing and curbs on free trade have weighed on stock markets, which have been particularly volatile in the first half of 2018, and this could have a knock-on effect on M&A confidence.

M&A will remain a strategic necessity for multinationals reacting to technological convergence and regulatory change, which bodes well for activity levels continuing into the rest of the year. Yet after a period of economic stability and favorable deal conditions, markets are becoming less predictable. M&A is still in a strong position, but dealmakers may need to tread carefully.

The combination of low interest rates, steady economic growth and a buoyant M&A market has meant that there has been very little distressed debt activity in the US over the last five years. Yet despite a steady start to the year in 2018 for conventional M&A, there are indications that distressed dealflow could be on the rise. Interest in distressed debt funds is increasing globally according to a survey by Preqin, which found that at the end of Q1 2018, 52 percent of investors were seeking distressed debt investments, up from 46 percent over the same period in 2017.

Conditions tighten
Although the bankruptcy figures are seasonal and can be volatile from quarter to quarter, the spike in recent data suggests that the economic cycle is beginning to turn and that financial conditions are tightening. The Federal Reserve announced an interest rate rise in June and indicated that it will make another two rate hikes this year. As rates rise, weaker businesses will find it more difficult to refinance and raise new capital.

Retail in distress
The retail sector has been particularly hard hit, with the consumer shift to online shopping and high operational and financial gearing placing some retailers in difficulty. Women's clothing chain Nine West, jewelry chain Claire's and Toys R Us are just some of the high-profile names to either file for bankruptcy or proceed with liquidation. Figures from the American Bankruptcy Institute, meanwhile, suggest that more businesses are feeling distress, with corporate bankruptcies in Q1 reaching their highest level since April 2011. Rising interest rates, fundamental shifts in sectors like retail and large amounts of capital targeted at distressed investments all point to more deals in this space over the coming months.

M&A activity targeting the Latin America & Caribbean region continued the momentum it gained in 2017 into the first half of 2018. The region has attracted 277 deals worth US$68.4 billion in the first half of the year, more than doubling the value achieved in the same period in 2017.

Turning a corner
Negative growth in Brazil, which had to navigate a high-level corruption probe, and Argentina, which suffered a sovereign debt default, weighed on growth across Latin America. Yet political change in these countries has boosted dealmaking. A new administration in Argentina has introduced measures to simplify taxation and boost small business. Meanwhile, Brazil's stock market has posted all-time highs in 2018 as the corruption investigation progresses. Suzano Papel e Celulose's US$15.3 billion takeover of Brazilian manufacturer Fibria Celulose, the largest deal in the region this year, is a clear example of confidence flowing back into South America's largest economy.

Hot sectors
The region's traditionally strong industries of energy and infrastructure were the most active sectors in the last 18 months, with Enel Chile paying US$3.3 billion for a stake in Enel Generación Chile and Neoenergia's US$3.1 billion acquisition of AES Eletropaulo in Brazil. Investors seeking growth are also starting to explore deals in sectors such as retail, technology and financial services. Banco Popular de Puerto Rico acquired Wells Fargo's Puerto Rican auto finance business for US$1.7 billion, while Didi Chuxing invested US$900 million for a stake in Brazilian internet and ecommerce platform 99 Taxis Desenvolvimento de Softwares. After a difficult period, Latin American M&A appears to be heading for more stable ground.