Growth in the European leveraged finance market remained steady in 2019, with 2020 set to continue at pace, with enhanced focus on the trade-off of protection from risk versus a higher yield

A new decade starts with optimism and a strong pipeline, to build on the resilience of an ever-maturing market.

As we enter the new decade, the resilient European leveraged finance market continues to grow and mature. The market is agile and has continued to deal with significant changes, ranging from the mix of leveraged loans and high yield bonds to the impact of direct lenders, sectoral and regional changes, as well as politics across Europe, including considerations relating to Brexit.

Against that backdrop, we begin 2020 with a pipeline of approximately €36 billion, nearly 70 per cent higher than 2019, year-on-year. Pricing is at an attractive level for borrowers, with the lowest high yield bond pricing levels for new issues in recent times; cov-lite has taken hold of the market; restructurings are at low levels; and a platform for social change, led by the UN Sustainable Development Goals, environmental, social and governance standards and investor sentiment, all point towards great market potential.

Still, potential bumps in the road—central bank action causing interest rate hikes, the impact of the coronavirus outbreak (both in China and globally), full details of Brexit and the finalisation of trade deals across the globe—will all have details which will affect the market, but the market is better placed than ever to deal with these factors, as industry professionals put to work their experience of recent years in growing the market to good effect.

Restructuring: When is the right time? 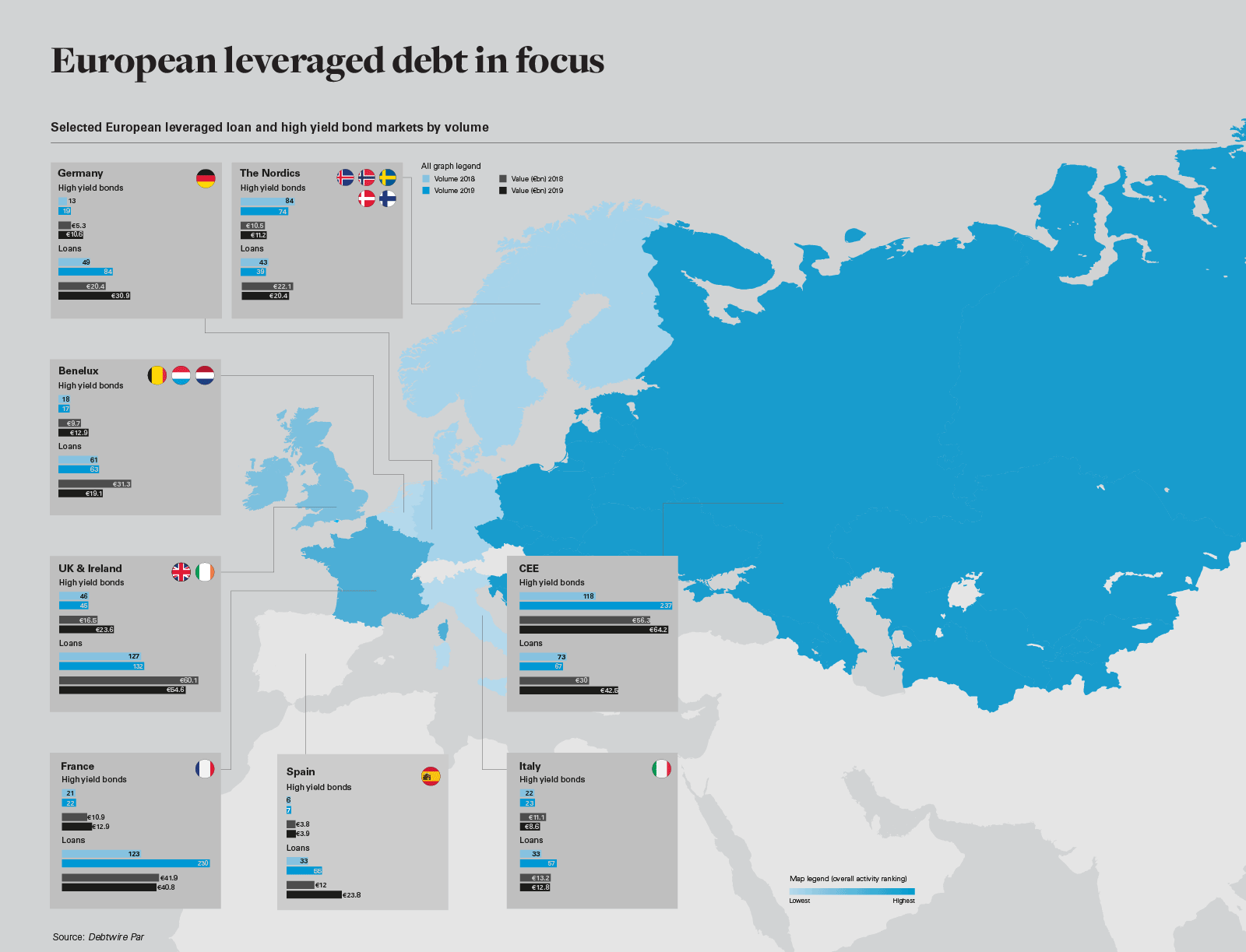 The Spanish leveraged finance market went from strength-to strength in 2019, with a selection of large deals and the market’s capacity to execute complex deal structures pushing issuance to four-year highs.

High yield offered few surprises in 2019, but the leveraged finance market in Spain has enjoyed a particularly good year, boosted by several larger deals and significant activity in the mid-market, which is the biggest market in the country. The market has matured, grown
more sophisticated and, as far as investors are concerned, is more closely aligned with Western European trends than ever before.

The growth of Spain’s market is further reflected in the big-ticket deals the market has been able to digest and deliver.

KKR’s €602.23 million (US$667.5 million) take-private of pizza group Telepizza, for example, saw the investment firm start out with a standard bridge loan and revolving credit facility, with a view to refinance the whole facility through a €333.8 million (US$370 million) high yield bond priced at 6.25 per cent, according to Debtwire Par.

This deal was particularly notable in that the bridge loan was subject to English law, while the covenant package was subject to New York law. A few years ago, the Spanish market would have found it difficult to understand a complex structure like this. In today’s more sophisticated market, deals like these are no longer unusual.

Grifols is another prime example: The pharmaceuticals group secured a refinancing involving a term loan B (TLB) that sat alongside a high yield bond and a super-senior revolving credit facility. Spanish telecoms group MásMóvil, meanwhile, sought to refinance a convertible bond and simultaneously increase its debt in 2019 by combining a covenantlite loan with the issue of preferred equity.

While TLB structures were considered better suited to London and New York a few years ago, they are now viewed as another viable source of financing by banks and borrowers in Spain.

Spain enters new territory
Deal momentum is expected to carry the market in 2020, with airline operator IAG’s €1 billion (US$1.11 billion) acquisition of Air Europa and a bidding war for Spanish Stock Exchange group BME both expected to tap into leveraged markets.

Despite the positive outlook and cov-lite characteristics of loan issuance, however, an uptick in restructuring activity is anticipated. Deals like the €1.8 billion (US$2 billion) issue for supermarket cooperative Eroski have already made a telling contribution to restructuring values. With the Spanish Socialist Workers’ Party winning the most seats in the November 2019 general election, rising taxes are also a distinct possibility and could weigh on both consumer spending and corporate cash flows

While acquisitions are in the pipeline, the market may see more restructurings by Q3 and Q4 2020, running in parallel with acquisitions. This is new territory for Spain, and should make for an interesting year ahead.

"The leveraged finance market in Spain has enjoyed a particularly good year, boosted by several larger deals and significant activity in the mid-market, which is the biggest market in the country."

Sector watch: Hot or not?

In a market that has seen notable highs and lows since the financial crisis, while remaining ever-vigilant for red flags, a degree of consistency is beginning to take hold in European leveraged finance

European public-to-private (P2P) deal activity has surged over the past decade, with take-private deals becoming a key generator of deal flow for private equity (PE) firms as they seek to deploy capital.

This consistent growth in P2P activity reflects the rise of private capital and a shift from public markets, which has resulted from a combination of underlying factors.

Private M&A processes have become ever-increasingly competitive between PE bidders and among the institutions looking to finance them.

Record inflows into PE funds, the rise of private credit, an endless appetite for new debt issuance from CLOs and an ongoing low interest rate environment has meant that there is significant debt and equity dry-powder and ever-increasing pressure to deploy those funds. A scarcity of good-quality and available privately held assets has led to a greater sense of adventure into the public markets.

In deploying these funds, PE firms have been able to take advantage of recent volatility in public markets to acquire undervalued assets. This has been further exacerbated in the UK by a fall in the value of sterling caused by uncertainty surrounding Brexit. There may also have been instances of public company managers and more vocal activist investors who feel their companies are undervalued and that PE can offer the multiples they are expecting.

To some extent, increased PE activity in P2Ps, especially on big-ticket deals, has meant that PE is more comfortable with the regulatory process and regulators are more familiar with PE. Historically, there may have been some concern about the regulatory obligations involved in a public takeover, including whether a regulator would be sympathetic to buyout investors.

A reluctance to publicise deal terms and perceived higher execution risk (where deals are subject to counter-offers, 'bumpitrage' and longer than usual timelines) may have also previously appeared as barriers to entry.

Increased deal flow has meant that PE firms are increasingly comfortable operating in the public sphere, while old-fashioned perceptions from regulators that PE represents a threat to good corporate governance have evaporated.

Where are we headed?

The P2P trend looks likely to continue into 2020 as many of the underlying fundamentals remain supportive.

Growing interest among new entrants to European public takeovers will also continue to contribute to an uptick in public activity. These new players include: mid-market PE firms focusing on smaller targets (as big-ticket opportunities are more competitive); direct lenders, who are increasingly willing to lend bigger tickets on more competitive terms; and US bidders, which will add greater complexity to NY law credit agreements and US syndication processes in order to comply with European and UK regulation.

Caution may be warranted

Despite strong P2P tailwinds, some triggers could slow activity or add layers of complexity to the process. The UK, for example, appears to be subject to a continuing degree of economic certainty following the 2019 general election, which may result in fewer opportunities for pricing arbitrage. Meanwhile, a benign environment of easy monetary policy has allowed global stock markets to hit recent record highs (although the UK market is still relatively cheap).

If equity markets continue to grind higher, public targets will start to look less and less attractive. In these circumstances, it will be interesting to witness whether the financing markets (under pressure to deploy capital) out-muscle high prices in the equity markets (with PE always reluctant to increase multiples). In the short term, this will undoubtedly lead to greater pressure on more thorough and exhaustive diligence to find the right targets.

Regulation of P2Ps is also evolving as watchdogs across Europe catch up with the rise in take-private deal activity. Squeeze-out thresholds are shifting in certain jurisdictions, deals are being documented as shortterm bridge financings in order to avoid having to agree (and publicise) long-term documentation on rushed timetables, levels of disclosure (particularly around flex terms) are commonly now being discussed in greater detail, and the alignment of deal timelines with 'certain funds' and regulatory requirements are likely to come under increasing scrutiny.

While bid financing has coalesced into relatively established market standards, increased regulation and a spotlight on PE activity in the public markets could require new or more innovative approaches to P2P transactions.