Restructuring in Turkey: A new paradigm?

As more Turkish companies begin to report liquidity issues and economic pressures begin to bite, successful financial restructurings are likely to become increasingly critical to the prosperity of the Turkish economy

Turkey's geopolitical significance as a bridge between Europe and Asia is common knowledge in the West. What is perhaps less well known is that Turkey's economy is the 13th largest in the world, and the 6th largest in Europe. However, in recent years that economy has had to face up to significant political and financial headwinds as regional stresses and economic challenges escalate.

These pressures, combined with the lira's continued depreciation (losing around 40% of its value in 2018), has started to trigger announcements by companies about cash flow payments and missed debt payments. Inevitably, investors in Turkey are starting to focus on how best to restructure debt, while those not yet invested in Turkish debt are watching closely for potential distressed investments.

Historically, there have been few formal restructurings in Turkey. The processes that existed were not particularly effective or often used, and restructurings have tended to be implemented on a consensual and 'behind closed doors' basis between debtors and their Turkish lenders. The last period of significant restructurings in Turkey was in the early 2000s, when the Turkish banks, following the so-called "Istanbul approach", were able to work with other creditors outside of formal processes to implement debt amendments. However, those same large Turkish banks are now under pressure themselves because of their reliance on external financing and the effect of the lira crisis, combined with high levels of exposure to stressed sectors such as energy and real estate. As a consequence, most large Turkish banks have now created separate work-out teams to deal with distressed borrowers.

The number of large highly-levered businesses facing distress suggests potential opportunities for distressed investors, and recent legislative changes mean that there are now several formal restructuring processes that are available to debtors and their creditors in the Turkish market. These processes are mostly untested however, and it remains to be seen how widely adopted and they will be, and/or whether further statutory amendments may be made. In particular, questions remain as to the level of involvement for international lenders or non-bank creditors, and whether the newly-introduced "framework agreement" will cater to them adequately. Only time will tell whether local processes will provide a suitable toolkit for large-scale corporate restructurings, or whether other international restructuring processes may also have a role to play. 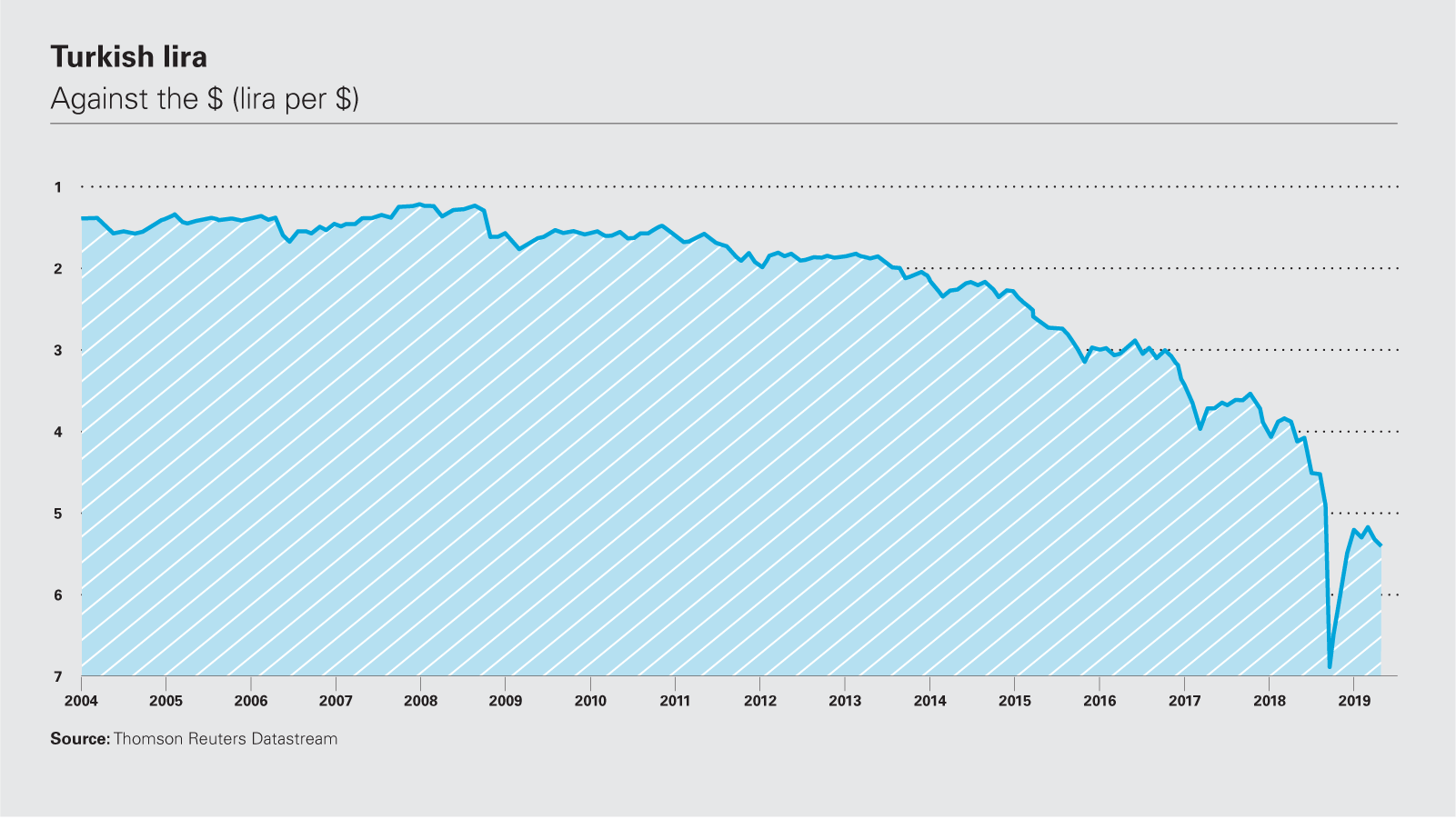 In August 2018, the Turkish legislature sought to address some of the uncertainty surrounding the Turkish restructuring process by enacting the Regulation on the Restructuring of Debts in the Financial Sector (Regulation). The Regulation introduced the concept of a Framework Agreement ('Finansal Yeniden Yapılandırma Çerçeve Anlaşması' or 'Çerçeve Anlaşma' in short) to act as the template intercreditor agreement through which debtors and their creditors can negotiate an agreement to restructure outstanding indebtedness.

The new framework echoes the 'Istanbul approach' launched in 2002 with a similar intention of facilitating restructurings led by the major Turkish banks and key industry players. The Istanbul approach (named after its Western European predecessor, the 'London approach') was considered successful, resulting in the restructuring of more than 300 companies during its three-year lifespan.

The Framework Agreement, which has been recently amended and posted on the website of the Banks Association of Turkey, is signed up to by the main credit institutions and banks in Turkey (referred to as 'Creditor Institutions') and forms the 'constitution' of restructurings to be entered into pursuant to the Regulation. Although as currently formulated, the Framework Agreement as the main intercreditor platform for Turkish financial institutions is only capable of being signed by Turkish financial institutions (and not international lenders), it sets out the contractual framework for terms of individual debtor-specific financial restructuring agreements (FRAs), while allowing flexibility in the terms of the underlying restructurings.

International lenders may sign the Framework Agreement, if they choose to, and join a specific restructuring without the approval of the other creditors.

Some of the key features of the Framework Agreement include:

For many large Turkish corporates, particularly those in the infrastructure, construction and energy sectors, international debt constitutes a large part of their balance sheet, and so the lack of certainty as to how the Framework Agreement structure will apply to such creditors is a major limiting factor on the potential effectiveness of the new regime. 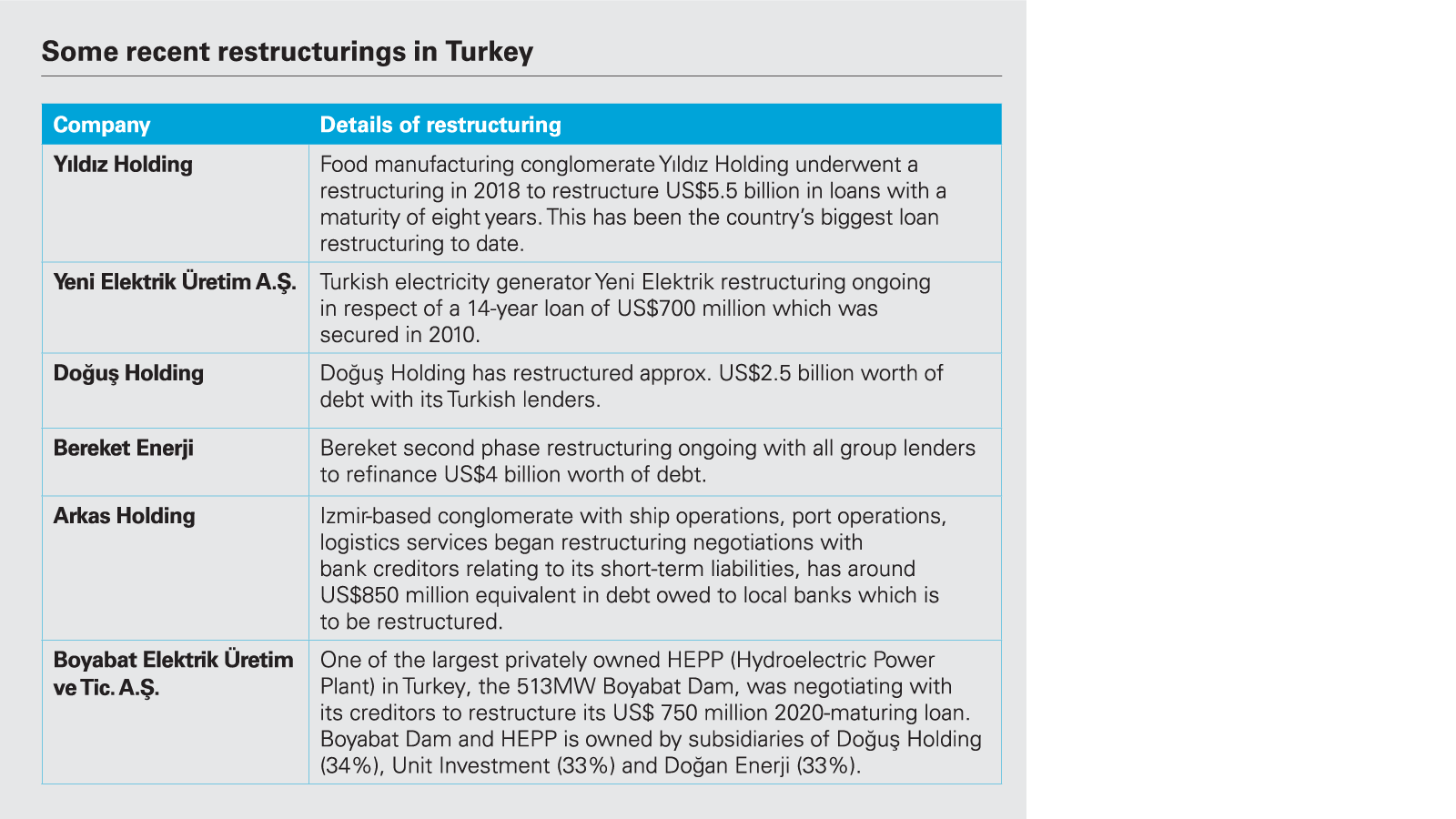 Konkordato, the principal Turkish restructuring regime prior to the implementation of the new Framework Agreement structure (and which remains in effect notwithstanding the new regime), is a court-led process governed by the Turkish Enforcement and Bankruptcy Code. The aim of Konkordato is to restructure a company's indebtedness via a restructuring plan (the 'Konkordato Plan') that proposes amendments, extensions and/or haircuts to creditors, so that the company can avoid bankruptcy. Either the debtor company or a creditor can apply to the Court to put a company into Konkordato.

Because the Konkordato process is only available to restructure obligations of a single legal entity, it is not suitable for many large-scale corporate group restructurings. In addition, although the required approval level is relatively low (either (i) 50% in value and number or (ii) 2/3 in value and 1/4 in number), the Konkordato process carries two substantial downsides. The first is the degree of involvement of the Court (and Court-appointed comissar) and potential level of oversight on the debtor. The second is that if the debtor fails to agree or implement a Konkordato Plan, the Court has no option but to file it for bankruptcy. 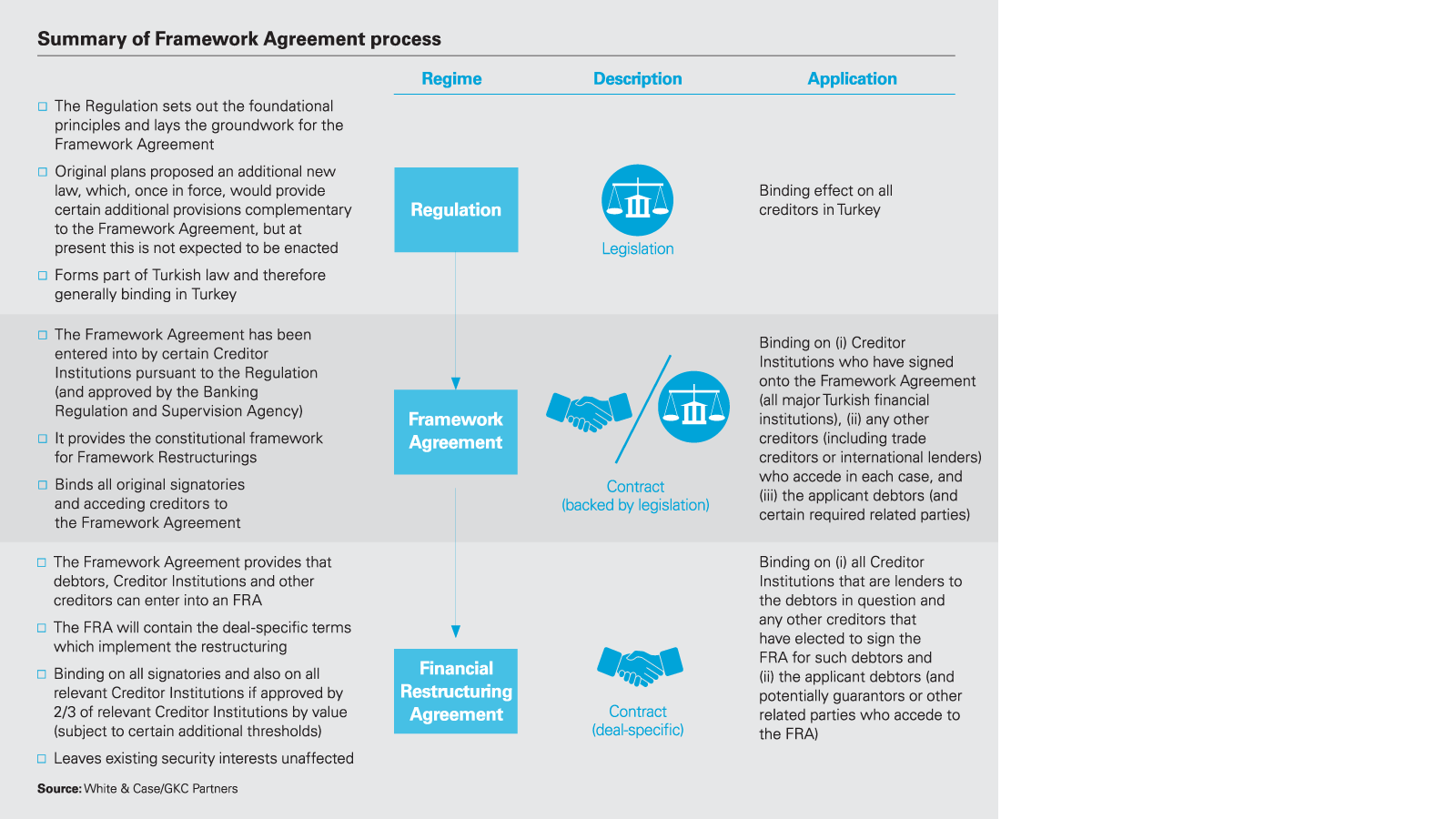 As with Konkordato, if the creditors do not approve the Restructuring Settlement, or it cannot be successfully implemented, the Court is required to place the company into bankruptcy upon application of the creditors.

Given the tight timeframes applicable to this process, the lack of an automatic moratorium and the threat of bankruptcy should it not be successful, the Restructuring Settlement has not been widely used. The mechanism is more likely to be useful in implementing a consensual restructuring agreed to by a debtor and a sufficient proportion of its creditors.

Given the challenges posed by local Turkish restructuring tools—particularly when international creditors are involved—more sophisticated Turkish debtors may look to alternative options that have become familiar in recent international restructurings.

Two obvious candidates are the English scheme of arrangement and the the US chapter 11 process, both of which are tried and tested and do not require the centre of main interest of the debtor company to be in that jurisdiction in order to take advantage of the process. 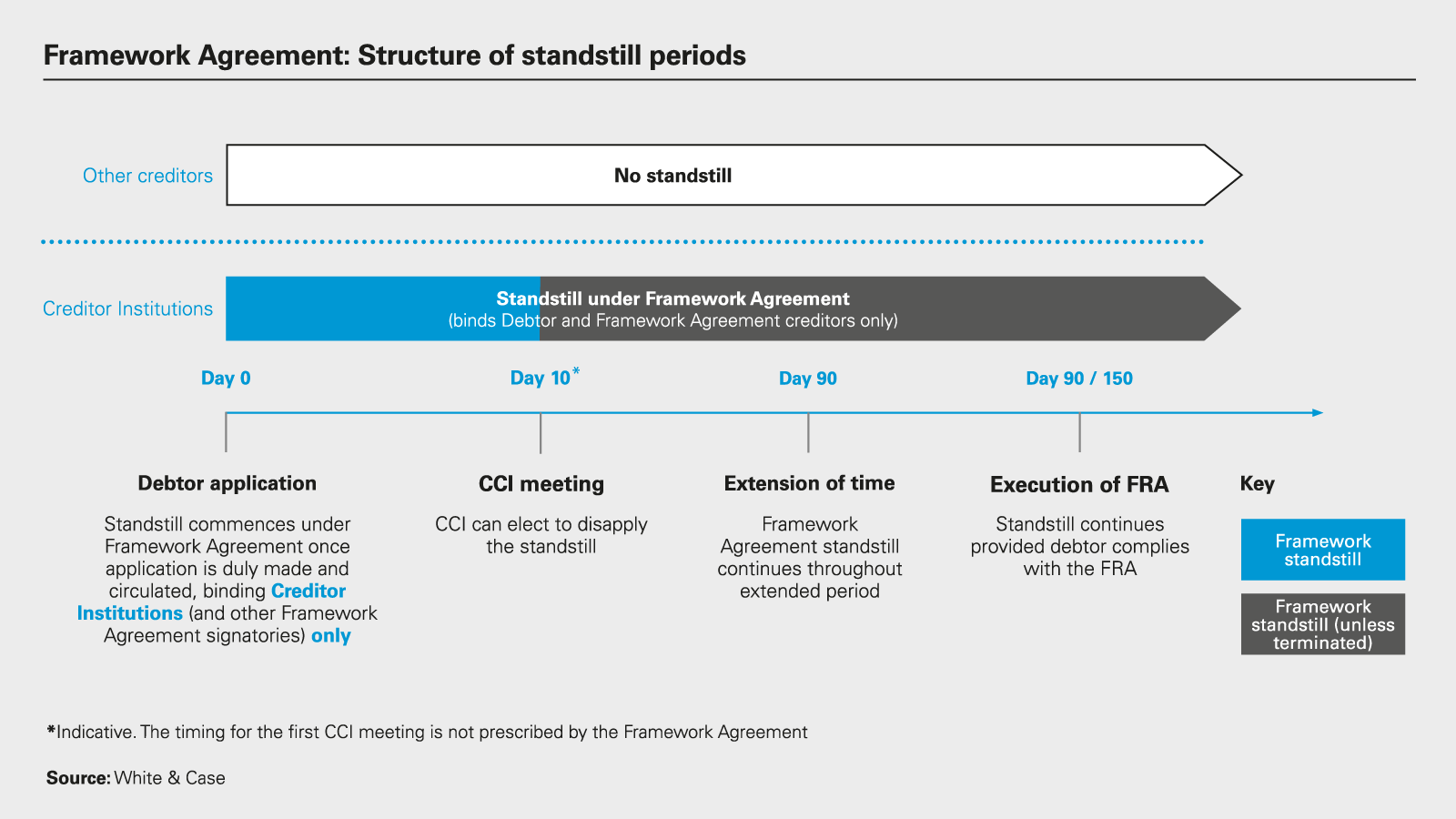 An English scheme of arrangement is a well-established route for companies to restructure their debt. If a debtor's existing finance documents were not already governed by English law, a change of governing law by the majority lenders would open up the scheme of arrangement as a possibility.

A company's creditors can approve a scheme with a majority in number and 75% by value of each affected creditor class. Court sanction is also required for the scheme to become effective, but in the absence of some impropriety or unfair treatment of creditors, the English Court will usually be inclined to sanction a scheme approved by the requisite majorities.

While there is no moratorium applicable to a scheme of arrangement because it is not an 'insolvency' process (being contained in the UK Companies Act 2006), there is not the stigma attached to insolvency, nor would a standard insolvency cross-default clause (as would commonly be found in commercial contracts, as opposed to finance documents) be triggered by the scheme. Another strong advantage to a scheme of arrangement is that it is confined to the restructuring of the financial debt of the distressed company, leaving trading operations and creditors intact.

Although no successful scheme has yet been implemented for a Turkish company, we expect that English schemes would be effective and recognised under Turkish law.

It remains to be seen whether Turkish debtors will have the appetite to use a scheme of arrangement for these purposes, but for those debtors with material international creditors, a scheme may be a viable option. 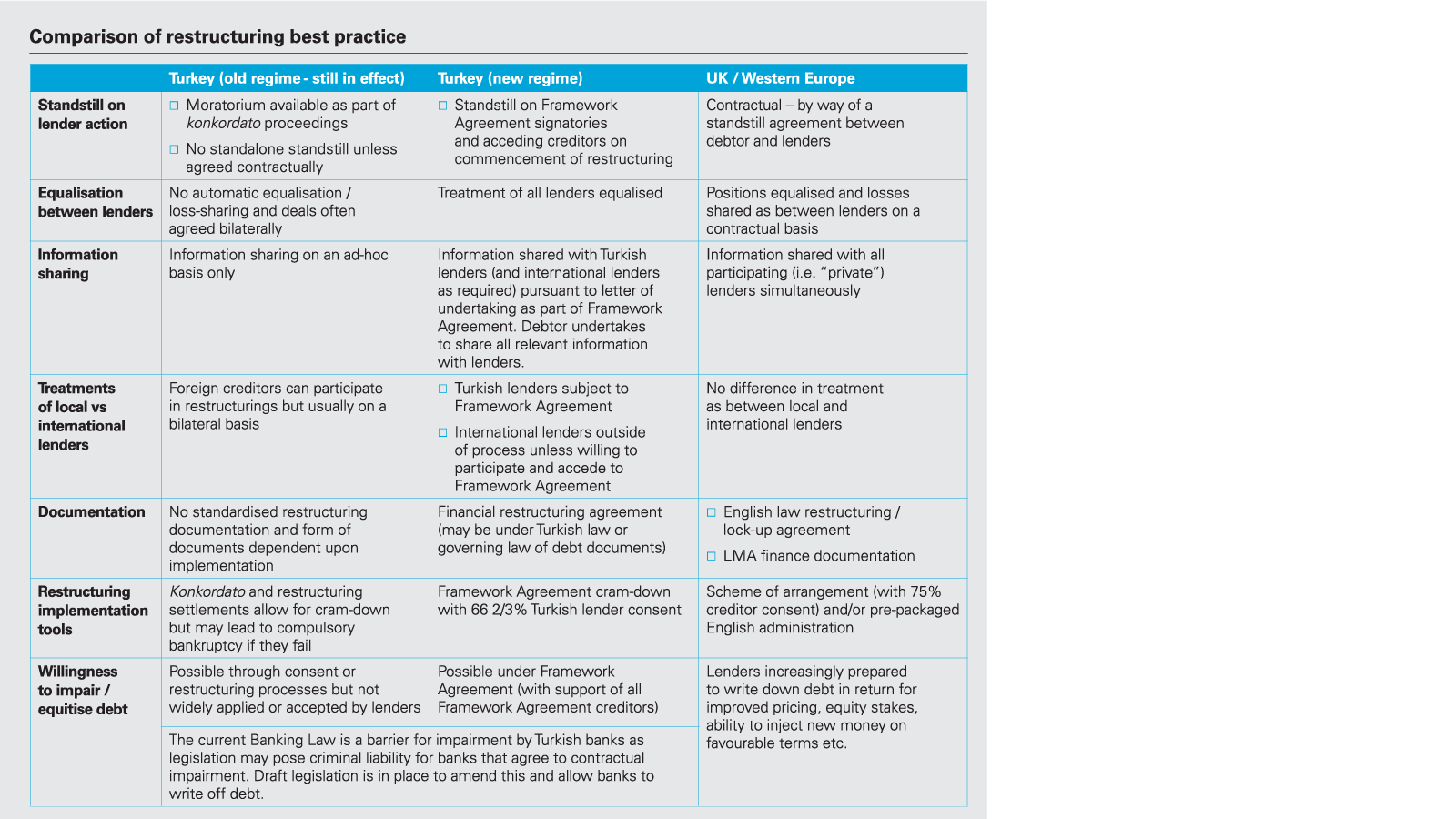 When it is either not possible to perform an English scheme of arrangement or the 'extra-territorial' effect of a US chapter 11 is a desired outcome, chapter 11 is another viable option for a Turkish debtor. The US Bankruptcy Court can take jurisdiction if the Turkish debtor has money in a bank account in the US (which can be achieved by putting a retainer in a law firm's US client account), even if there are no other links between the debtor and the US.

While the chapter 11 process is longer and more heavily court-based than an English scheme, it can provide a more holistic solution to a company's financial distress. The cross-class cram-down available in chapter 11 is useful if there are impaired classes of creditors that need to be bound into the process.

Chapter 11 provides a moratorium upon the bankruptcy filing, and in the event that the Turkish debtor was in need of rescue finance to maintain its operations during the chapter 11 process, debtor-in-possession (DIP) financing and its primacy can be secured. 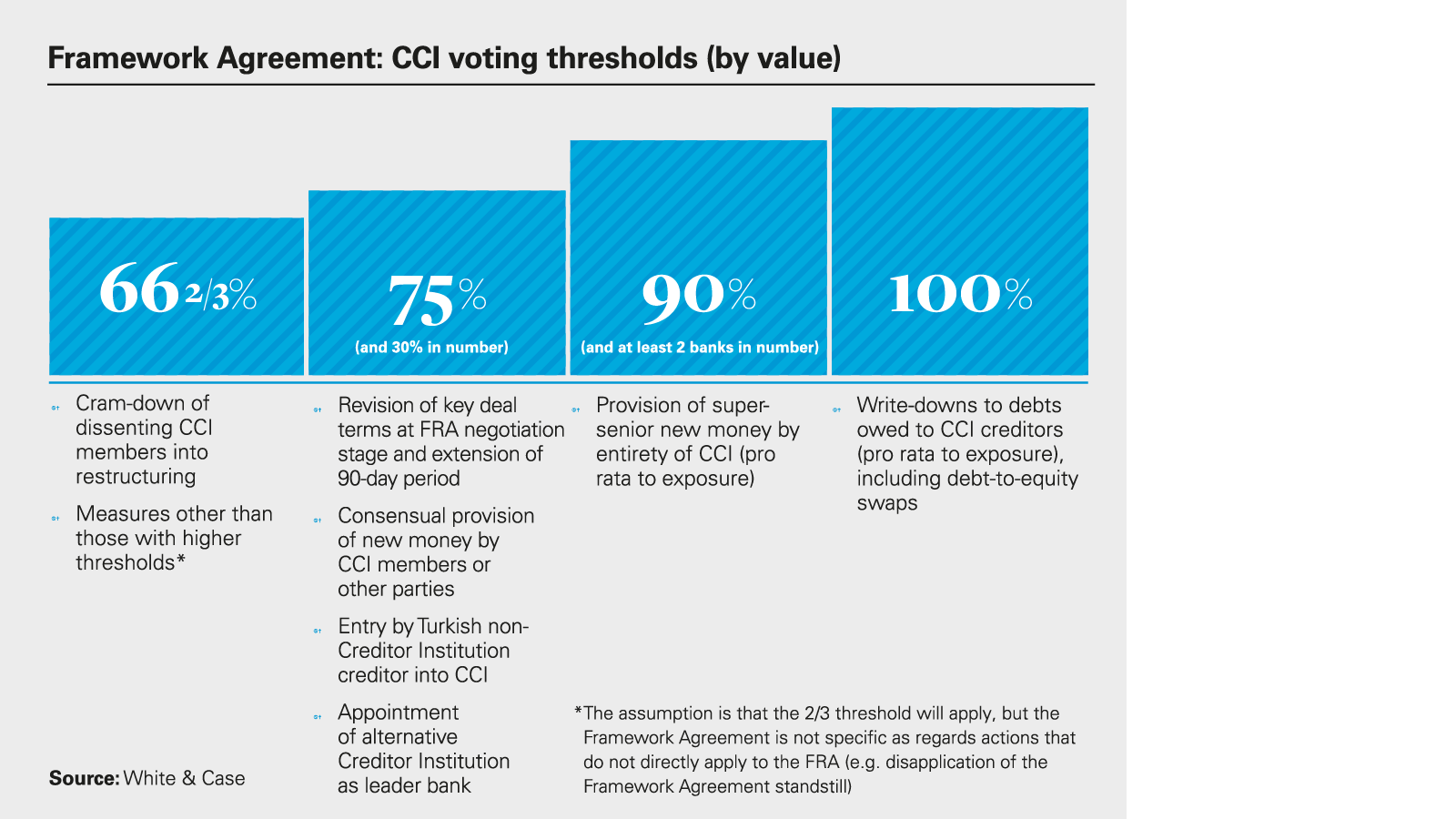 Given the current distress in Turkey and the impending maturity walls in this and subsequent years, Turkey looks likely to be an intriguing jurisdiction for international debt investors. The depreciation of the lira and the large amounts of debt outstanding in foreign currencies may well give rise to opportunities for investors prepared to invest in distressed assets.

Some of the uncertainties—such as how restructurings negotiated under the Framework Agreement will be made effective where there are non-consenting international lenders—may be become clearer over time and as the first wave of debtors make use of the new regime. However, Turkey has no track record of international restructurings. Although the Istanbul Approach was comparatively successful in the 2000s, the lenders then were Turkish banks, not international lenders. Upcoming restructuring discussions will therefore have a very different tenor from those that took place some 15 years ago.

That uncertainty has the potential to create opportunities for distressed investors looking for new markets. If the pricing reaches levels that are sufficiently attractive, investors may well be prepared to accept the geopolitical risks and reap their rewards through Turkish restructurings.

Turkey remains a challenging jurisdiction, and some investors may be hesitant to take on the risks associated with investing in the debt of Turkish companies. However, the Regulation provides welcome evidence that the Turkish government is seeking to address the effect of the refinancing wall and lira depreciation on the Turkish economy and its borrowers. Corporate restructurings are clearly needed, and both government and banks are more aware of this than ever, but it is also clear that more needs to be done.

The ability to utilise the new regime (perhaps in parallel with a recognised international tool such as a scheme of arrangement) may potentially provide additional certainty and transparency to Turkish restructurings, and may go some way to unlocking Turkey as an attractive opportunity for international investors.

One thing seems inevitable: Turkish restructurings are likely only to increase in the coming months and years as Turkish banks face up to the need to work out their distressed loan books. As a consequence, Turkey will become a jurisdiction of ever-increasing interest to distressed investors. Whether or not the market in Turkey will open up to large-scale international distressed debt investment in the manner of other European countries remains to be seen. It is likely to depend on whether developments such as the new legislative regime can provide the stability and certainty that investors require. The next 12 months, and the first few major restructurings featuring institutional creditors, will be hugely instructive. Watch this space.