The appetite for cross-border M&A shows no signs of abating. Despite rising valuations, growing regulatory scrutiny, interest rate hikes and the specter of protectionism, 62 percent of respondents are planning a cross- border technology acquisition in the next two years.

A drive to survive

These cross-border tech deals are being driven by strategic rather than tactical imperatives. For many acquirers, getting the right deal is a means of survival in the face of accelerating technological disruption.

Our survey findings bear this out. Factors that normally motivate acquirers—such as affordable valuations, supply chain improvements, cost reductions and low labor costs—barely move the needle. Instead, acquirers are overwhelmingly focused on the strategic imperatives of building scale and acquiring IP.

The fundamental nature of the forces driving deals suggests that the momentum will continue. A significant percentage of cross- border tech deals are clearly non- discretionary, as companies struggle to remain relevant in the face of accelerating digital disruption. For example, carmakers—and others— are racing to develop new technology in connection with autonomous driving and electric vehicles. And in sub-sectors such as luxury goods, accelerated dealmaking is being spurred on by businesses anxious to grab customers before Amazon and Alibaba get to them.

Our research highlights two main drivers for cross-border tech acquisitions. The first is the race to grow the customer base and increase scale, mentioned by 69 percent of respondents. To this end, acquirers are expanding into new geographies, extending product ranges or offering existing products on new platforms.

The second motivation is the need to build depth by acquiring IP. Forty-six percent of respondents said getting new IP to strengthen their position in current areas of business was important. IP-driven acquisitions can deepen existing capabilities and enable growth in adjacent markets.

Meanwhile, the ongoing struggle to remain relevant in a fast-changing world saw 22 percent state that the ability to expand into new areas of business was an important factor driving their acquisition strategies.

When it comes to choosing whether to acquire a tech target in another country, there are two standout attractions, according to respondents. Seventy-one percent cite the existence of an attractive market for a company's products, and 57 percent cite a strong pool of tech targets in that country. Meanwhile, almost 32 percent cite favorable demographics.

Only 11 percent point to affordable valuations and a mere 6 percent cite low labor costs as important factors. This provides further confirmation that tech acquirers are motivated by strategic factors in the current environment.

India heads the list of most attractive countries, with 20 percent of respondents picking it as the top spot for a technology acquisition over the next 12 to 24 months. Rapid growth is a key attraction. Indian e-commerce is expected to reach US$200 billion by 2026, up from US$38.5 billion in 2017, according to the Brand Equity Foundation. And within the next six years, India will overtake China to become the world's most populous nation, according to the UN.

Germany takes second place, chosen by 16 percent of respondents—well ahead of the US, the UK and Canada. Executives point to Germany's deep pool of tech targets as a motivating factor. Indeed, the World Economic Forum's Global Competitiveness Report recently found Germany to be the world's most innovative nation and the highest-placed European economy for competitiveness.

The UK is attractive to companies that want to grow their customer or IP base or develop new business models. However, a disorderly Brexit could have negative consequences for tech investment and erode the country's current position as a strategic European foothold. The fact that India and Germany rank much higher than the UK as attractive locations suggests that Brexit concerns may already be having an effect.

Other growth markets include Israel, which is a hotbed for tech innovation. Recent deal figures show that corporations and private equity firms are increasingly homing in on the country.

Meanwhile, the Nordics— birthplace of Spotify and Skype— also offer enormous opportunities. Tech-related dealmaking in the region outstripped both France and Germany in both volume and value in the five years up to and including 2018. 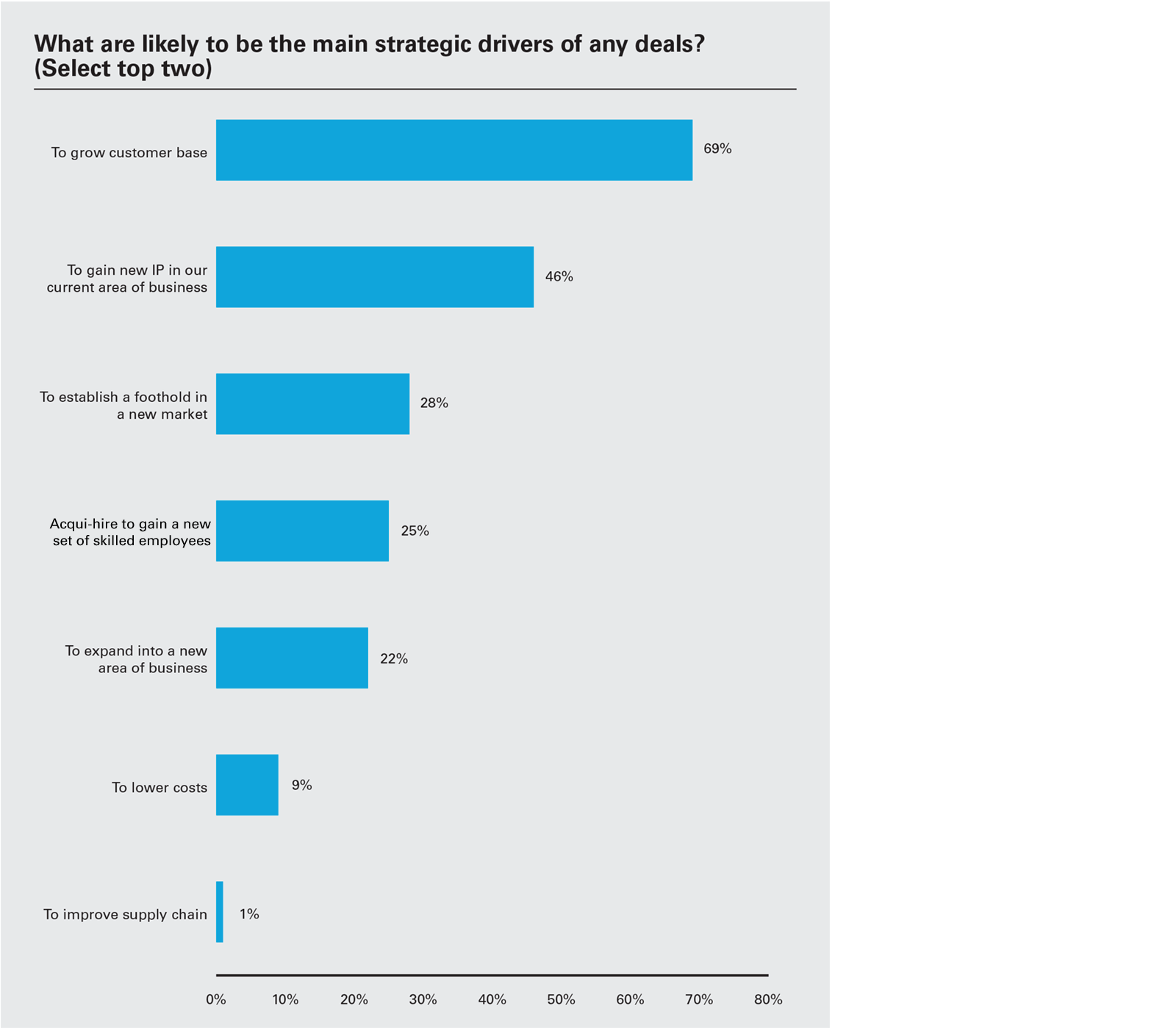 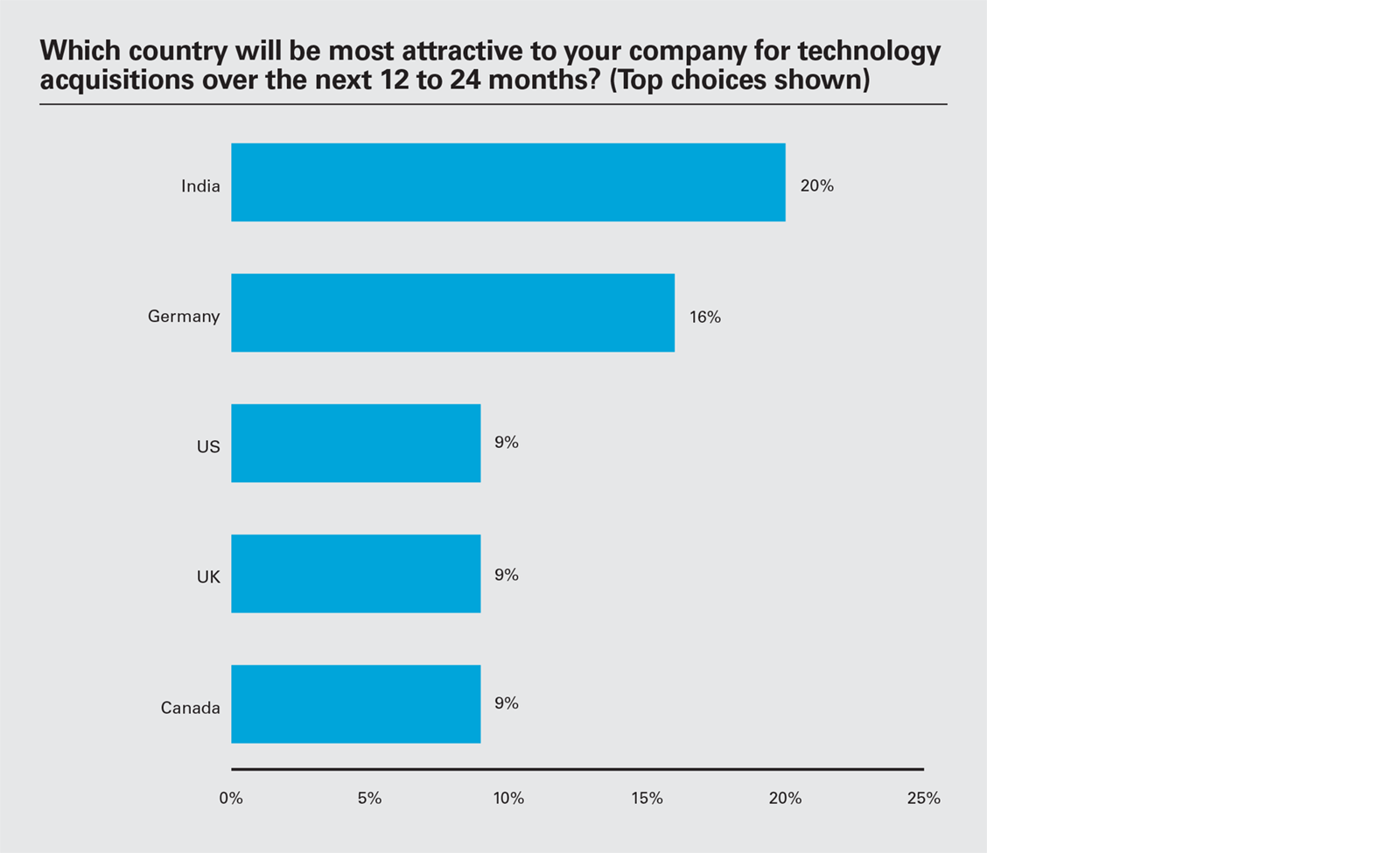 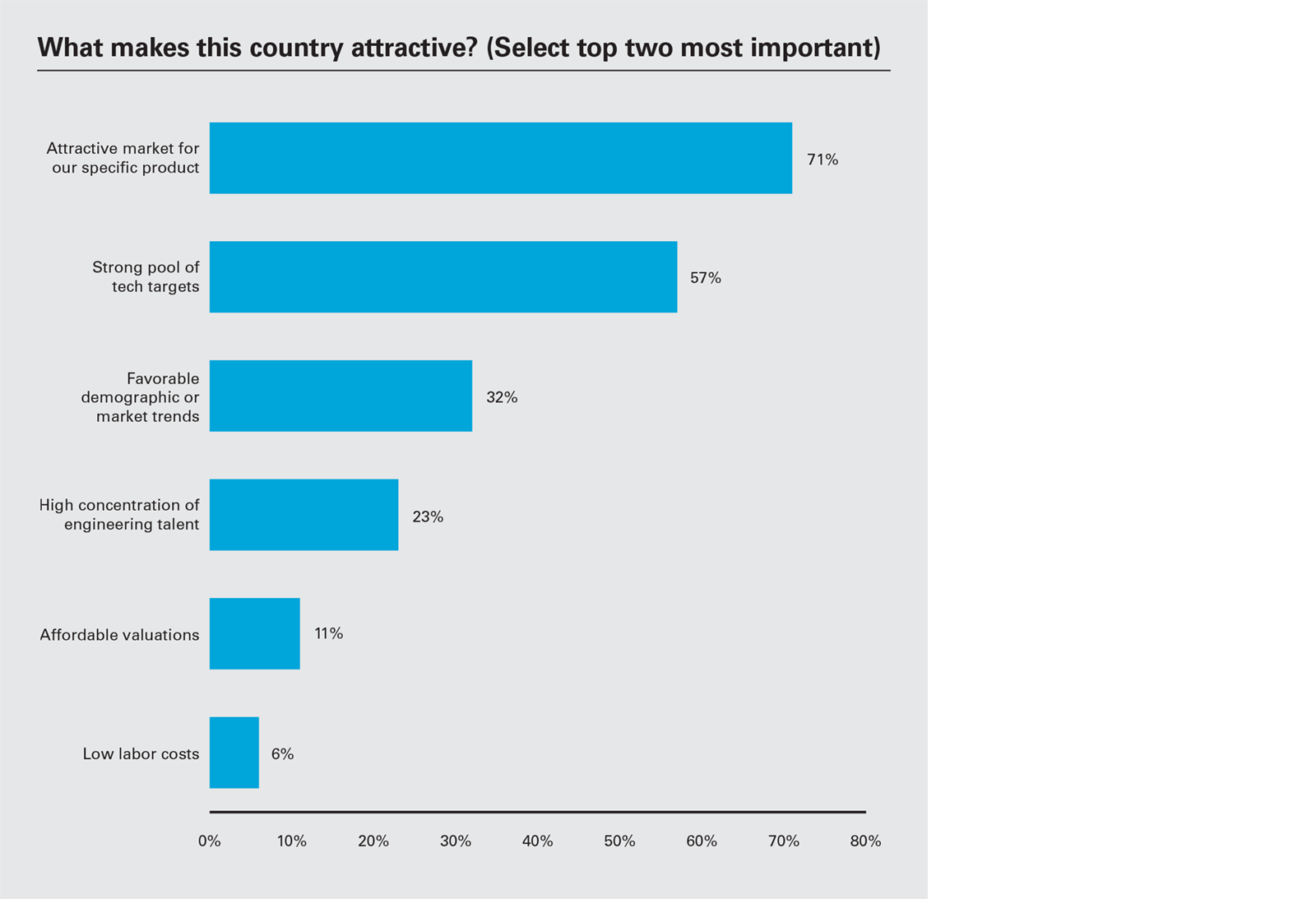 The war for talent rages on. A quarter of respondents say that adding highly valued talent by means of an acquisition (an "acqui- hire") is a primary strategic driver for cross-border acquisitions. "Skilled employees are hard to get and retaining them is even more of an issue," says the director of a US-based cloud computing company. "The best way to build talent is to acquire it." Outside of these survey responses, it is difficult to track the extent to which acqui-hires are being used—public companies may elect not to disclose acqui-hires if they are not material in size, and private companies are not subject to obligations to report acquisitions.

Blockchain is on everyone's mind. An increasing number of companies appear to have accepted that blockchain will be a game changer and are working to incorporate blockchain technology into their businesses. For example, in sectors as diverse as banking, diamond mining, fresh produce and real estate, companies are looking to distributed ledger technology as a way to drive business transformation.

Data drives deals. Large proprietary sets of data (for example, generated by users of an online product) can be a primary driver of value for a technology company. Using this data helps companies more effectively tailor products and services in ways that others are unable to match. And artificial intelligence is increasingly viewed as a vital method for unlocking value from data.