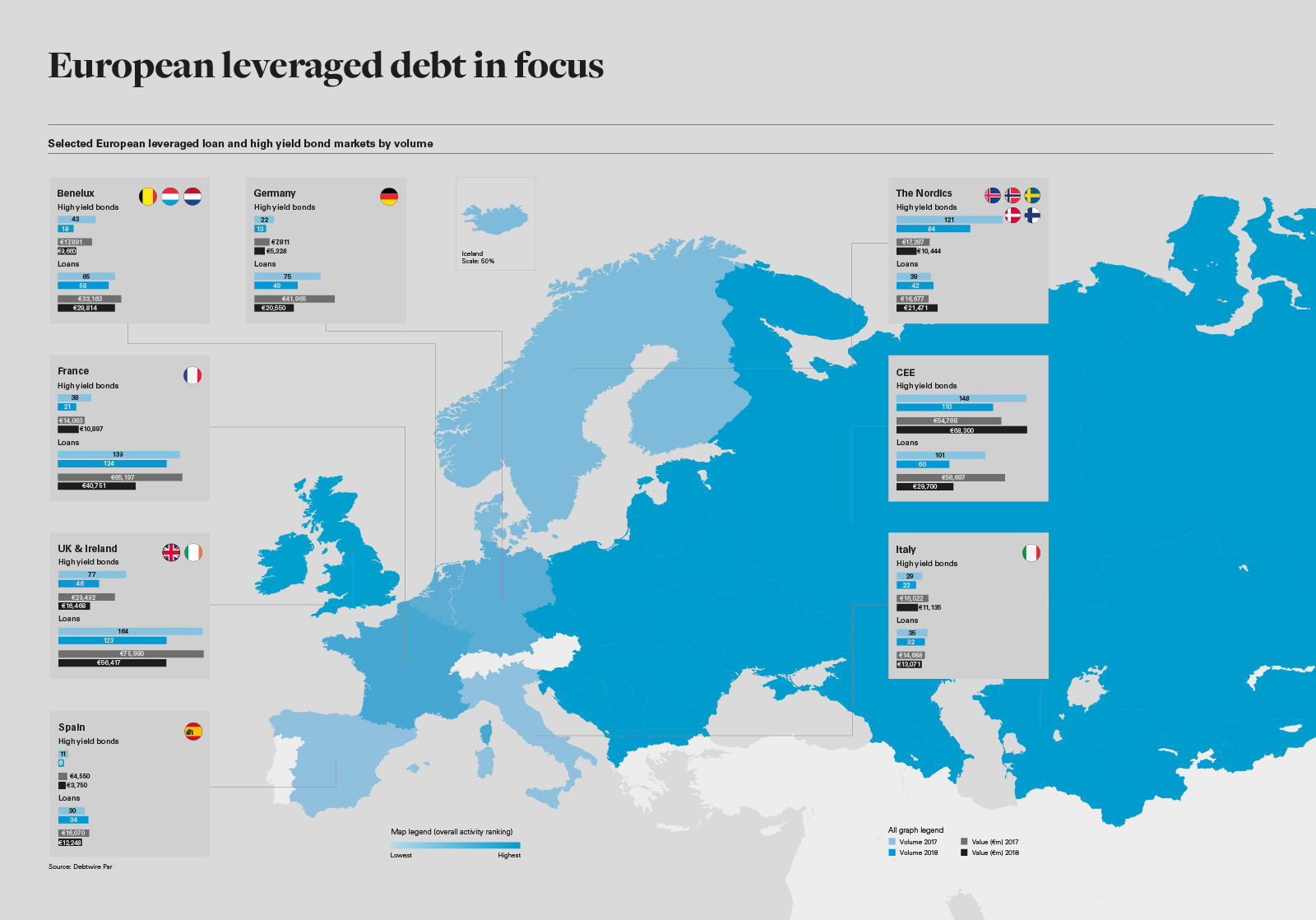 In the aftermath of the financial crisis, low interest rates and quantitative easing (QE) squeezed fixed income investment portfolios to their thinnest margins in developed markets in recent years. In the United States, ten-year treasury yields fell to record lows of 1.4 per cent in 2016. A year earlier, German bunds, alongside government debt from some of their European neighbours, were trading at negative yields.

Major institutional investors such as pension funds and insurers — traditionally the main customers in sovereign and investment-grade markets—needed to move further down the credit curve to find satisfactory returns. Once on the fringes, the leveraged finance market is now a mainstay of many investors' portfolios. New buyers, sellers and advisers have made their way onto the field and the global market has doubled from US$1.2 trillion (in 2008) to more than US$2.4 trillion (in 2018), according to a report from the Bank of International Settlements.

The rise of loans and cov-lite deals

In the five years since the first White & Case leveraged debt outlook was published, investor interest has skewed towards the leveraged loan market, which has increased its market share against high yield bonds. For example, the percentage of the European leveraged finance market accounted for by loans grew from 54 per cent in 2014 to 74 per cent by 2018.

In addition, borrowers have had greater sway in setting market terms, which has led to an overwhelming number of so-called "cov-lite" loan deals — i.e., those with a lack of financial maintenance covenants. Lenders today have less bargaining power as they embrace greater risk in search of higher yield, with covenant and security protection often being weakened. The cov-lite phenomenon was imported from the US to Europe, which historically had much stricter terms. The cov-lite term once meant to indicate an outlier in Europe has now become the norm. Cov-lite accounted for 81 per cent of institutional loans in 2018 in Europe.

One of the key changes is that financial maintenance covenants for European borrowers, once a staple in the sector, now appear only once in every five issuances. This means lenders increasingly do not have the default triggers related to operational underperformance which signals a potential problem with the borrower's ability to pay and this may delay an inevitable debt restructuring.

What a difference a decade makes

Fears that the market would be unable to absorb debt maturity walls have so far turned out to be baseless. While at the start of 2009, in the US, the sector faced a wall of debt that would mature by the end of 2015 totalling US$1.4 trillion; some five years later, after lenders and borrowers met in the market to refinance ahead of this deadline, this 'wall' had been reduced to approximately US$350 billion according to Fitch—meaning the 2015 deadline passed without incident.

Overall, markets have matured and become established. In the past, when shocks hit, markets would shut down for three to six months. These days, they are less reactive to perceived crises and have been able to maintain stability. For example, despite the upheaval and political uncertainty wrought by Brexit, the UK dentist chain My Dentist was able to issue a GBP bond within a month of the UK's unexpected decision to leave the EU.

However, the market did experience a hiatus in the final days of 2018, as the US high yield market saw no issuance in the whole of December for the first time in a decade. This pause was broken in the US in early January, with the sale of a US$750 million bond by US gas pipeline company Targa, which sits at the riskier end of the credit spectrum. The deal was so popular, in fact, that the issuer added an extra maturity tranche and doubled the amount issued. In Europe, while there were some early-year deal launches, the market had a relatively slow start to 2019, though a pipeline of deals, including M&A, is beginning to emerge.