Appetite for cross-border deals remains high across countries. Seventy-six percent of respondents to our survey said that they expect to carry out at least one cross-border deal in the next year. That figure was the same across Europe, the US and Asia-Pacific—but responses from a few countries stood out, including China (86 percent), Spain (86 percent), Germany (86 percent) and France (84 percent).

And 80 percent of respondents said they expect to carry out more cross-border deals this year compared to last.

The UK ranked number one on the list of targets, with 33 percent of executives saying they'll be looking to do deals in the UK in 2020—followed by Germany (28 percent), France (24 percent), China (23 percent) and the US (18 percent). Indeed, 50 percent of respondents based in Spain expect to target the UK, as do 43 percent of those based in China.

The value of global cross-border M&A has remained fairly steady since 2014, ranging from a high of US$1.5 trillion in 2015 to a low of US$1.3 trillion in 2017. There's a sense in which cross-border dealmaking is like an inflated balloon—putting the squeeze in one area doesn't shrink the overall size, it just sends oxygen to another area.

But as the pundits like to say, policies have consequences. Data from our survey highlight how trade and national security policies can distort the market in ways that create pent-up demand. 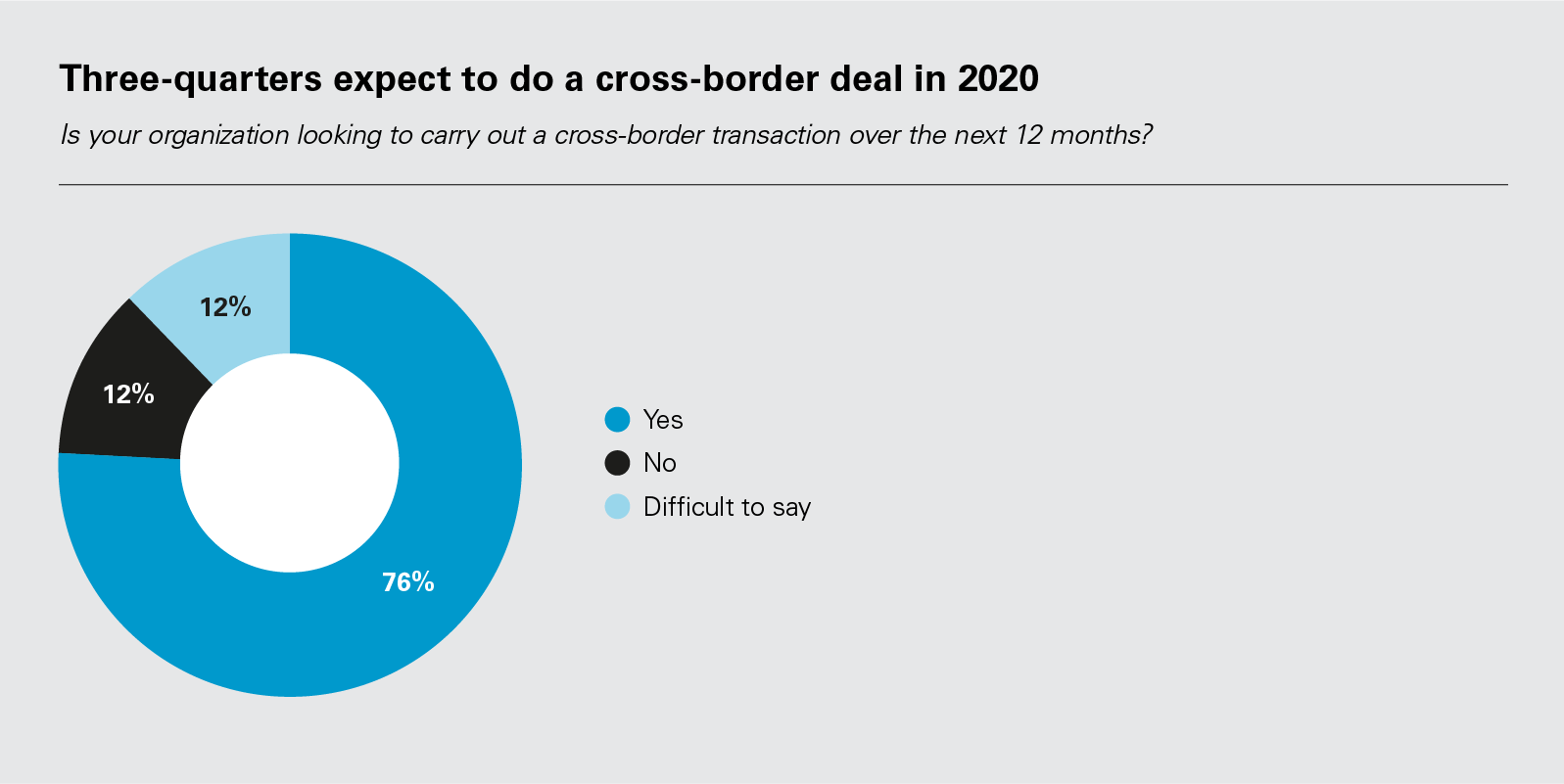 It can be difficult to assess the impact of trade issues on M&A. Trade wars and agreements can render some potential crossborder investments relatively less attractive, but it can encourage other types of investment, leading some companies to shift focus from one country or region to another. For example, companies may seek to move production from one country to another to capitalize on benefits or avoid penalties following changes in trade policy.

But some companies do defer investment decisions until trade policies become clearer, often in the hope that they will have a better opportunity to invest in a particular country at a later date when circumstances are more advantageous. Brexit seems to be driving this kind of dynamic with regard to UK inbound M&A–which dipped to US$163 billion in 2019, its lowest value since 2014.

Our data suggest that Brexit has created pent-up demand for UK assets, having caused eager buyers to wait and see how the situation develops. Given that our survey closed before the recent UK elections, our data may even underestimate the potential for a rise in inbound activity, at least in the short term—assuming Prime Minister Boris Johnson brings greater clarity about the UK's path to Brexit. But remember that the rules governing the UK's future trading relationship with the rest of the world remain unclear. The "transition period," which will prevail at least through 2020, promises to be filled with the types of ups and downs that are likely to give investors second thoughts.

Effects of the US-China trade war are equally unclear. US-China trade friction doesn't seem to have created much pent-up demand so far, although it is hard to disentangle the factors that have contributed to the severe decline in cross-border M&A between the two countries in recent years. It's more likely that pent-up demand between these two countries is due to issues related to national security. 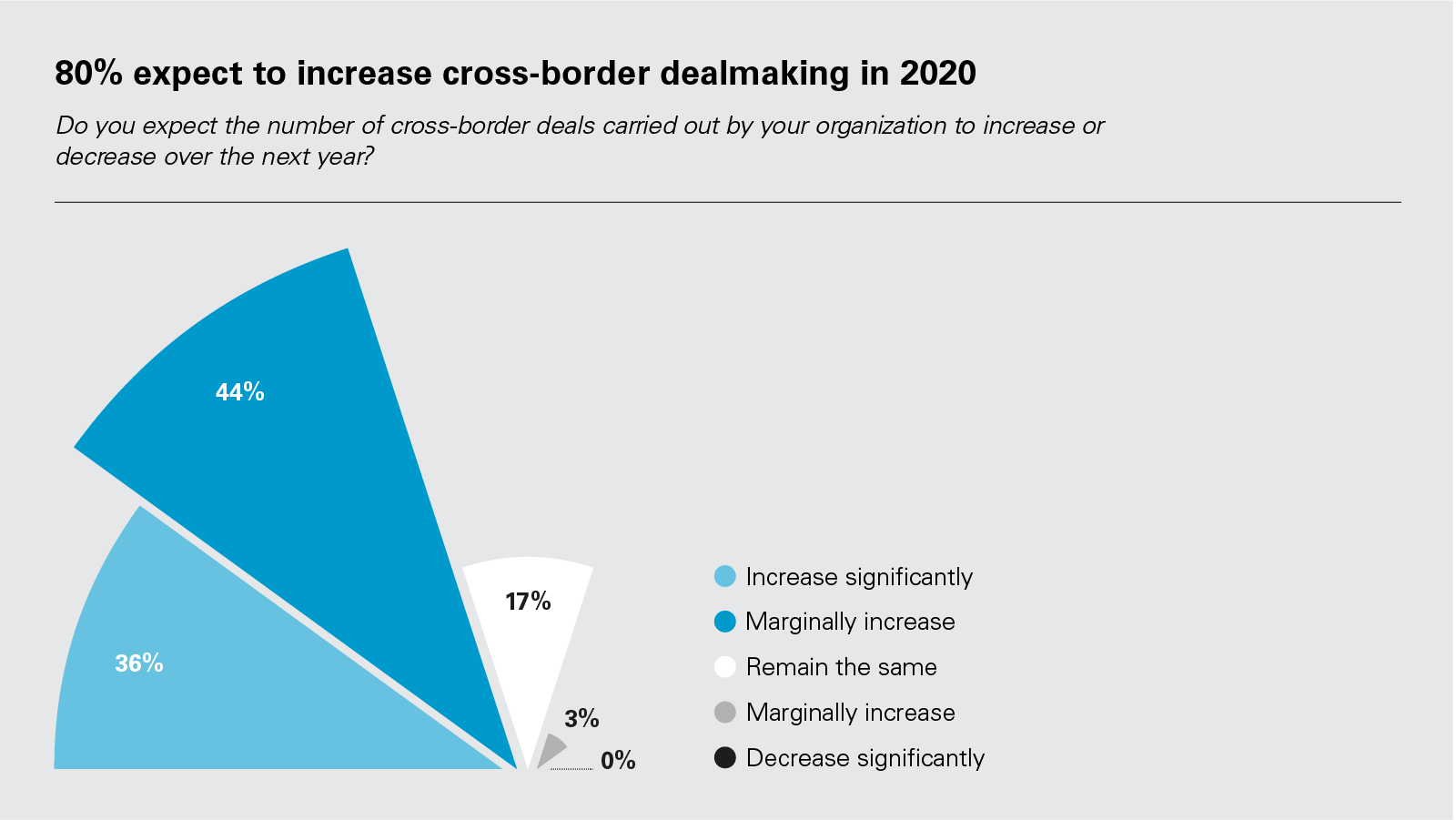 The Committee on Foreign Investment in the United States (CFIUS) conducts national security reviews of inbound investments into the US—and under the Trump administration, it has significantly ramped up scrutiny of foreign investments into US businesses with a potential link to critical technologies, critical infrastructure or sensitive personnel data, as well as investments in real estate located in close proximity to certain sensitive government installations. Indeed, new regulations implementing the Foreign Investment Risk Review Modernization Act (FIRRMA) went into effect on February 13, 2020.

CFIUS has had a profound effect on Chinese companies that are interested in investing in the US. And it has created tremendous pent-up demand, seriously frustrating Chinese executives. They are increasingly turning to other countries, such as Germany, the Nordics and Japan, in search of tech and other assets, but their appetite for US deals remain very strong.

For a long time, the US was one of the few countries that had a rigorous policy for evaluating foreign investments on national security grounds. Many countries do now, and more will in the future (for details, see our recent report "Foreign direct investment reviews 2019: A global perspective"). Germany and France are leading the way in Europe. Notably, the UK's policy is relatively light, which may help explain why China ranks the UK so highly as a target for cross-border deals.

But national security concerns can negatively affect any foreign buyer. "We're a UK company, and we've got a long history of getting approvals," says James Down, General Counsel, Corporate at Smiths Group, a UK-based diversified engineering company. "But we are still at a potential disadvantage in an auction process where a buyer wants speed and certainty and a competing bidder is a US buyer that doesn't have to get approvals."

Moreover, some companies may take national security into consideration out of concern about getting on the wrong side of regulators. That could mean thinking twice about pursuing a transaction in China, for example, worrying that doing so could affect how US regulators may treat them in the future. 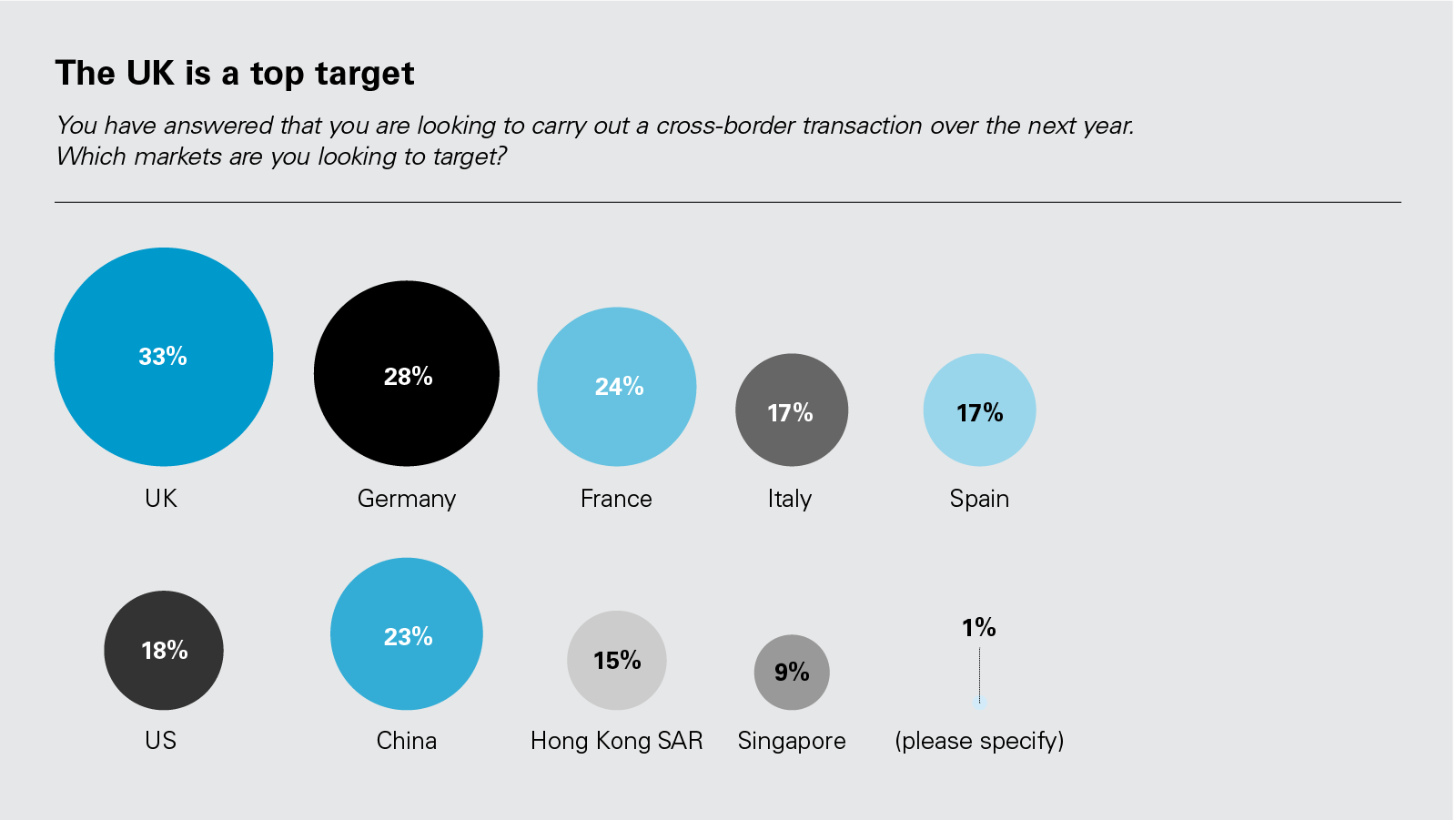 The UK is a top target (PDF)

Of course, countries sometimes implement protectionist policies to ensure that ownership of so-called "national jewels"—companies deemed particularly important, sometimes for a mix of economic, strategic and cultural reasons— remain within their borders. This can involve appeals to national security and identity as well as economic security.

These factors could lead to the potential emergence of "shadow protectionism" (see "The digital revolution could fuel ‘shadow protectionism'"), which could arise from conflicts over different cultural standards that affect how companies and governments use data—and which may relate to concerns about economic, national and personal security.