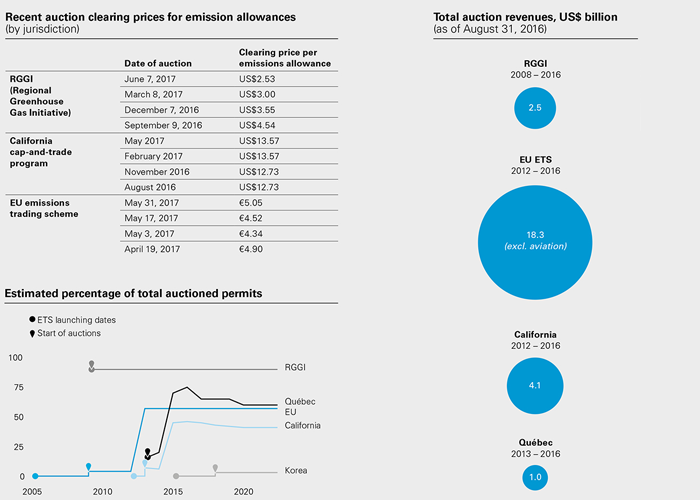 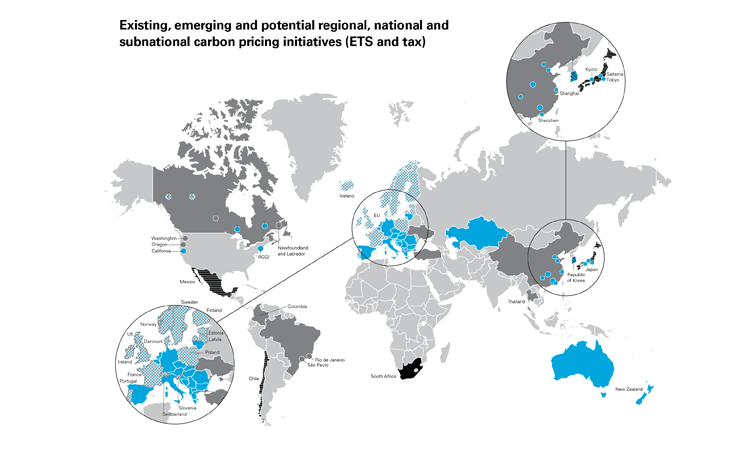 In the US, the trading of greenhouse gas (GHG) emission-reduction credits is underway in a large group of states on the East Coast and in California. In the northeast US, New England states and a group of Mid-Atlantic states joined together to set up a carbon dioxide (CO2) cap-and-trade regime that covers CO2 emissions from power plants in those states. On the West Coast, California's broader trading regime, which covers a wide range of GHGs from a variety of California emitters, is looking to expand to markets outside of the state.

The RGGI trading scheme, which became effective in 2009, applies only to CO2 emissions from fossil fuel-fred power plants with capacities to generate 25 MWs or more in the nine RGGI states. The RGGI system is therefore narrower than some other regional GHG emissions trading systems that cover GHGs other than CO2 and that apply to emitters other than power plants.

RGGI applies to emissions reductions within a regional framework, consistent with how the power system in the US operates. Together, the RGGI states set a cap for total emissions of CO2 from covered power plants in the region. Each state implements the program through emissions caps in individual RGGI-participating states that are equal to shares of the region-wide cap. The RGGI cap declines over time, gradually tightening emissions limits. Covered power plants in participating states must obtain an allowance for each ton of CO2 emitted annually (RGGI auctions allowances, rather than allocating them for free). Power plants within the region may comply by purchasing allowances at quarterly auctions, purchasing allowances from other generators within the region that have excess allowances or supporting offset projects. RGGI administered its frst auction of CO2 allowances in 2008.

By 2020, the RGGI CO2 cap is projected to contribute to a 45 percent reduction in the region's annual power-sector CO2 emissions from 2005 levels. The RGGI states recently proposed changes to the program after 2020, whereby the region's CO2 cap would decline by 2.275 million tons of CO2 per year after 2021, resulting in a reduction in the regional CO2 cap by 30 percent relative to 2020 levels through 2030. The RGGI states will host a public meeting on this proposal on September 25, 2017. Although Virginia is not an RGGI member, its governor recently directed environmental regulators in that state to cap power plant GHG emissions in Virginia and establish a GHG emissions trading system in the state where credits can be used in, and traded across, similar trading systems in other states. This could potentially include RGGI states. Whether Virginia establishes its trading connection with its East Coast RGGI neighbors or California's regional trading system remains to be seen. Additionally, both major political party gubernatorial candidates competing in New Jersey's upcoming election favor New Jersey's return to RGGI. New Jersey's current governor pulled the state out of the program in 2011.

The State of California operates one of the most active GHG trading markets in the world, covering a signifcant portion of the state's economy. California's program is second in size to the European Union's Emissions Trading System. The California cap-and-trade rules came into effect in 2013.

Following a 2015 expansion, California's GHG trading scheme applies to power plants and industrial facilities that emit 25,000 metric tons or more of Co2-equivalent, and fuel distributors that meet the 25,000 metric ton threshold. The covered emissions include weighted equivalent values of methane, nitrous oxide, sulfur hexafluoride, perfluorocarbons and nitrogen trifluoride, along with Co2. This makes the California cap-and-trade system broader than the East Coast's RGGI system because the California system covers emitters other than power plants and GHGs other than CO2.

California's cap-and-trade program is one element of the state's larger climate change initiative, the California Global Warming Solutions Act of 2006, which aims to reduce the state's GHG emissions to 1990 levels by 2020 and to 40 percent below 1990 levels by 2030. On July 25, 2017, California Governor Jerry Brown signed into law legislation extending the state's GHG trading program through 2030. Notably, the extension law includes price ceilings and floors and new limits on the use of offsets. Furthermore, it prohibits local air districts from imposing additional limits on CO2 emissions from facilities subject to the cap-and-trade rules.

California's GHG cap-and-trade system also recently overcame a legal challenge in court. A split panel of judges in California's Third District Court of Appeals recently upheld the program, rejected claims that the state’s auction revenues equate to an unconstitutional tax, and instead found that the costs of buying or selling emissions allowances are property rights that can be traded. Had the court found the revenues to be taxes, the system would have been invalidated because tax increases must be approved by a two-thirds majority of the state Legislature, and the program did not have that level of support when it passed. The California Supreme Court declined to hear an appeal of this decision.

California's cap-and-trade system is connected to a similar carbon reduction scheme in Québec, Canada, which is discussed in the Canada section on page 4. This connection represents the first multi-sector cap-and-trade program connection in North America. Under it, allowances can be traded across jurisdictions. Ontario plans to join the program by next year as well.

Nevertheless, some environmental non-governmental organizations oppose cross-border trading system connections because of their belief that GHG emissions reductions should occur directly at the source of the emissions, rather than outside of the jurisdiction where the source is located.