Managing your international business risks in 2019

Amid global market uncertainties and shifting regulatory priorities, where the only constant is change, Taiwanese businesses still can plot strategic pathways to success.

Welcome to our fourth report on global trends and opportunities for Taiwanese companies and investors conducting business internationally.

With the United States focusing more and more on China's technology industry as a national security priority, Taiwanese companies should take specific steps to decrease their risk of becoming collateral damage in a US-China "tech war." Similarly, despite a heightening US-China trade war, careful assessments of any supply chains that include China-made parts and related actions can help protect Taiwanese companies' access to US markets.

We hope you find this useful, and we look forward to seeing Taiwanese businesses grow and thrive in the year ahead.

After many years of careful planning the Taiwan offshore wind sector is gaining traction, but challenges remain

The European Commission is moving quickly in a new investigation, seeking interim measures for the first time in two decades

Aesthetics matter in 2019. Companies are investing more resources to design sleek, modern products that let customers feel they own the technology of the future. This means that options for protecting those investments are also becoming more important.

For design-influenced Taiwanese companies operating in the United States, owning a portfolio of US design patents can provide more protection for your investments in product design than solely traditional options, such as copyrights and trademarks. At the same time, the US legal landscape surrounding design patents is in flux. A 2016 US Supreme Court decision in Apple v. Samsung sparked a legal regime shift, with significant and developing implications for how companies can and should protect their technologies and designs.

If design is a critical product component in your business, then design patents may prove particularly important, especially as you consider alternate proposed designs for a product in your pipeline or minor design alterations for the next generation of a product already on the market. The first step is to understand which designs are patentable in the US, how you can prove infringement and what amount of damages you could recover.

The increasing importance of us design patents

The US Patent and Trademark Office has been receiving design patent applications at increasing rates over the past decade (See Figure 1).

Design patent applications in the US must meet the same novelty and non-obviousness requirements as utility patents, but with slightly different standards:

If you are trying to protect alternate potential designs or minor design alterations to your existing products, should you seek a new design patent?

First, decide if the new design satisfies these novelty and non-obviousness requirements for patentability. If the incremental design change is so small that the "new" design is non-novel or obvious in light of prior design patents, then the "new" design is not patentable. On the other hand, if the incremental design change is significant enough to satisfy both patentability requirements, you could obtain a new design patent, and you likely should.

If you have existing design patents that do not render your new design unpatentable, then it is very likely your existing design patents do not protect your new design. Also important is your risk tolerance combined with your ability and willingness to absorb the patent prosecution costs (including filing fees, diligence fees, attorneys' fees and the opportunity costs of those expenditures). Whether a design is legitimately patentable subject matter may not be decided until years later when a court reviews the application file in the course of litigation. So, you should consider this carefully when deciding whether additional design patents are necessary or worthwhile to enhance your portfolio.

A product design infringes a US design patent if, under the "ordinary observer test" (the same test used to evaluate novelty), an ordinary observer would think the product design is either identical to or a slightly modified version of the patented design. To be clear, infringement occurs even when there are slight differences between a patented design and an infringing one; the "test for design patent infringement is not identity, but rather sufficient similarity" (Pac. Coast Marine Windshields Ltd. v. Malibu Boats, LLC, 739 F.3d 694, 701 (Fed. Cir. 2014)).

So what exactly infringes a design patent?

According to 35 U.S.C. §289 (2019), the operative design patent statute, whenever a design patent is infringed by an "article of manufacture" (AOM), the patent owner is entitled to damages. And it is very possible for an infringing AOM to be a component of a product, rather than an entire product.

This issue was the crux of Apple v. Samsung. Apple asserted design patents, which included the shape of the front of the phone and the grid of 16 colorful icons on a black screen, and then claimed that Samsung's phones were infringing AOMs, because they employed those design aspects. Samsung countered that only parts of its phone infringed on Apple's design patents, so only the infringing portions were the AOMs. The US Supreme Court agreed with Samsung that the AOM under §289 could be an individual product component rather than the entire product, but it declined to conclude whether Samsung's entire phone or individual parts constituted the AOMs or to establish a test for that question (Apple v. Samsung, 137 S. Ct. 429, 436 (2016)). On remand, the Northern District of California adopted a four-factor AOM test that the US Solicitor General proposed to the US Supreme Court during oral arguments, based on whether the infringing design is an inherent, integral part of the entire, finished infringing product or only a portion of it. Specifically, the relevant AOM is based on:

Although it could be some time before the US Supreme Court weighs in to officially accept or reject this test, it has started to meet with approval in other US district courts (e.g., Nordock, Inc. v. Sys., Inc., Case No. 11-CV-118, 2017 U.S. Dist. LEXIS 192413, at *15 (E.D. Wis. Nov. 21, 2017)). Over time, as more design patents are tested in US trial courts and reviewed by US appellate courts, the legitimacy and contours of this four-part AOM test will be clarified.

In traditional US utility patent infringement cases, the two standard theories of recovery for damages are the patent owner's lost profits and reasonable royalties. But with design patents, §289 authorizes a third, alternative, simpler-to-prove metric for damages: the total profits the infringing party earned from the AOM.

If a patent owner opts to use total profits as the damages metric, it is critical that the AOM be the entire product (or as close to it as possible). Demonstrating the infringer's total profits from the sale of a product to a jury is far easier (and will allow for much higher damages) if the AOM is a finished product, rather than one individual component of a product.

The Apple v. Samsung dispute offers a clear example of why the AOM matters. If the AOM infringing Apple's design patents was entire Samsung phones, Apple could recover all of Samsung's profits from the sale of the infringing phones. However, if the AOM was only components of the Samsung phones (only the shape of the front of the phone and the grid of colorful icons), then Apple could only recover Samsung's total profits derived directly from the infringing components, a damages amount that is presumably much less than the total profits from the entire phones. Although the jury verdict did not specifically identify the AOM, the US$533 million damages award (greater than the US$399 million from the original jury trial prior to US Supreme Court review) suggests that the jury likely found entire Samsung phones constituted the infringing AOMs.

The special patentability, infringement and damages considerations for design patents are useful when planning a broad design patent portfolio to protect your new inventions.

To determine the optimal business strategy for protecting your design-first hardware products:

The optimal design patent strategy for you should balance patent breadth and robustness interests, taking into consideration patent prosecution costs, patentability, the ease of protecting a range of designs and products, the ease of proving infringement and the recoverable damages in the case of infringement.

At the end of the day, the unique needs of your company, coupled with the depth of your intellectual property budget and your specific tolerance for risk, will define the right design patent portfolio strategy to protect your market position. 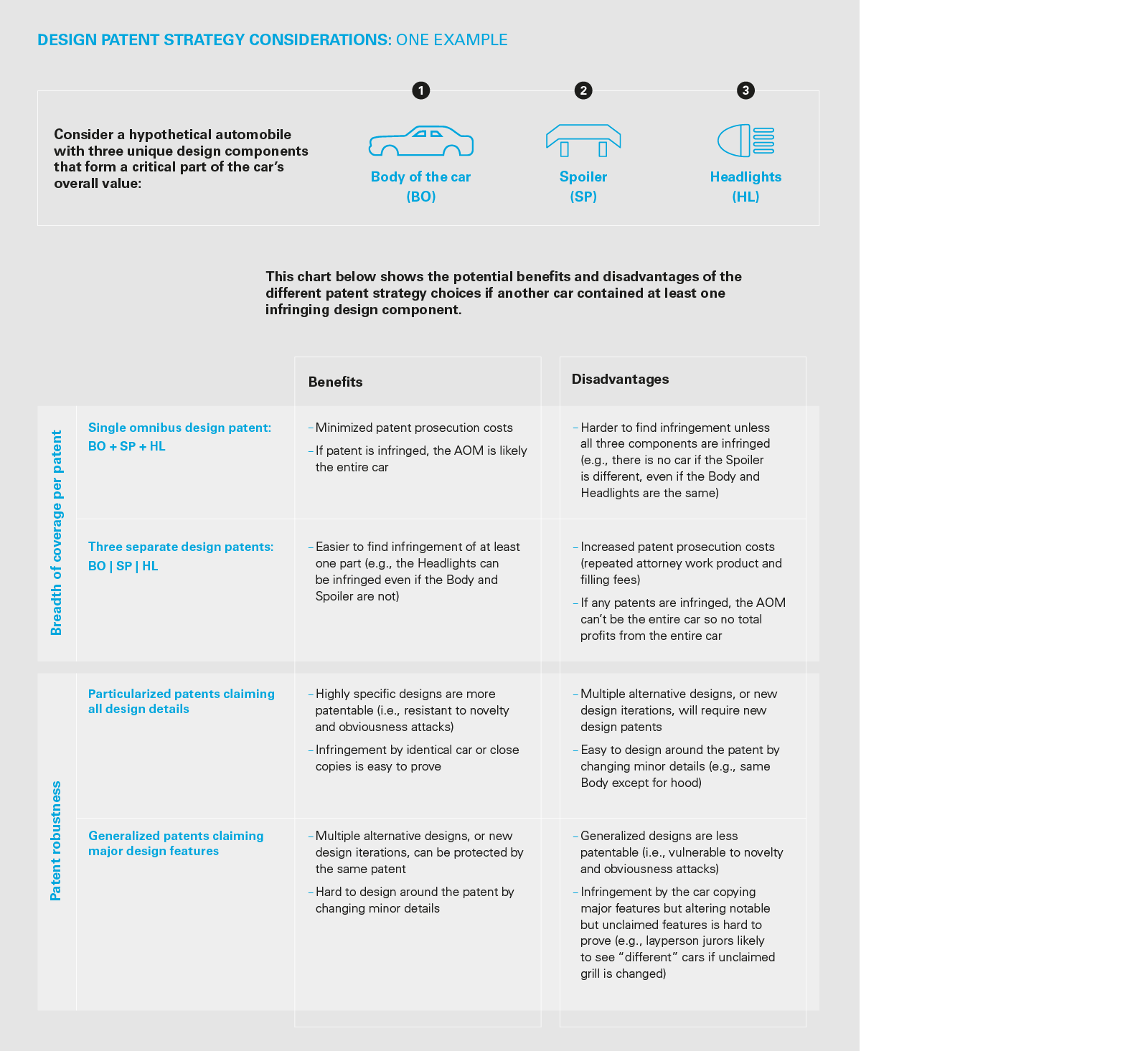