US dealmaking remains robust, as M&A's
strategic value remains as relevant as ever

In spite of an uncertain political backdrop, 2017 was a solid year for M&A in the US. And our exclusive survey reveals the drivers that could continue the momentum through 2018.

Following two blockbuster years was never going to be easy, but US M&A more than held its own in 2017. The total value of US M&A dropped 14.3 percent to US$1.3 trillion year-on-year, but volume increased by 0.4 percent to 5,347 deals.

Putting this into clearer perspective, 2017 value was the third-highest since the economic crisis took hold in 2008. Solid economic fundamentals continue to ensure deals were done—interest rates remain low, equity values are at record highs and there is a high degree of confidence within the business community. The US economy is growing steadily and continues to create jobs.

Uncertainty around the policy direction of Trump's first year as President weighed on dealmakers' confidence in 2017, as have concerns about antitrust enforcement and increased scrutiny of inbound deals by the Committee on Foreign Investment in the United States (CFIUS). Yet passage of a pro-business tax reform bill eased dealmakers' minds. The enthusiasm is evident in our survey of US dealmakers.

The survey also shows that strong strategic reasons continue to drive M&A. Technology is an important driver, disrupting companies in every industry, changing the way business is done and blurring the lines between traditional sector boundaries. “Old economy” companies simply have to buy tech skills and platforms if they are to survive the era of digital transformation. Meanwhile, technology companies are increasingly showing a willingness to acquire businesses that help them break into new adjacent sectors that they see as important for future growth.

Activist investors remain busy, with significant influence on corporate strategies. And traditional activists increasingly behave more like private equity funds as they partner with strategic acquirers or make acquisitions on their own. Meanwhile, private equity firms have record levels of untapped investment capital available for transactions. No dealmaker can afford to ignore macro-economic uncertainty, but the fundamentals supporting an active deal environment remain in place and M&A's strategic importance remains undiminished.

Peaks, valleys and plateaus: The US M&A landscape in 2017

Record levels of dry powder and intense competition for deals caused buyout volume to reach a record high in 2017, while exit activity is encouraged by high valuations.

The consumer, energy, financial services and tech sectors had standout years in 2017.

The sector saw the highest number of deals across all industries in 2017, as the hunt for innovative technologies continues to break down sector boundaries.

The race to consolidate resulted in a flurry of megadeals in 2017, while the disruptive impact of technology on consumer behavior continues to generate activity.

Energy dealmaking is fueled by oil and power

Oil & gas dealmaking continues to generate the bulk of sector activity; consolidation in the power sector was driven by unsettled market conditions.

Searching for the next big thing: Healthcare M&A

The hunt for blockbuster drugs is driving activity within the sector, while technology firms’ increasing presence in the market will be an area to watch in 2018.

M&A's strategic relevance will ensure transactions continue to close in the face of geopolitical uncertainty. But trends in four areas—taxation, technology, PE, and antitrust—could define the coming year of dealmaking

In H2 2017, White & Case, in partnership with Mergermarket, surveyed 200 senior-level executives about their experiences and outlook on M&A in the US. The aim of the survey was to analyze dealmaker sentiment within the industry and pinpoint issues and challenges at the forefront of dealmakers' minds in 2018. The key findings from our survey, below, are an almost equal mix of the encouraging, the not-so-encouraging and the unknown.

The "Tax Cuts and Jobs Act" passed through both the Senate and the House in December 2017. The bill, which cuts the corporate tax rate from 35 percent to 21 percent and lowers tax on repatriation of overseas cash, has been well received by US businesses and looks supportive of M&A activity.

The proposed tax cut was identified as a key area to watch in our survey, with dealmakers optimistic about the final outcome of Trump's reforms. Three-quarters of those polled say a significant reduction in federal corporation tax would increase their appetite for M&A.

Proposals encouraging companies to repatriate offshore earnings back into the US were also well received by survey respondents. Almost half say that the introduction of provisions, such as those in the new tax law, would increase their company's appetite for deals. Such incentives would result in significant tax savings, which can be further utilized for expansion and returning cash to shareholders.

For companies that are planning to undertake M&A during the next 12 months, the acquisition of IP and/or technology is expected to be a key driver, with a quarter of respondents identifying this as the main strategic rationale for deals in the year ahead.

As a result of the rapid advances in technological innovation seen in recent years, dealmakers are on the hunt for bolt-on acquisitions that will enable them to stay ahead in a rapidly evolving business climate.

The attractiveness of IP/ technology assets is not limited to one sector, and convergence between industries remains an important driver of activity. A 2017 study from research group CB Insights found that tech investments by non-tech companies were on course to surpass tech companies for the first time. Just over half (51 percent) of Fortune 500 investments into private tech companies came from non-tech corporations in the first half of 2017, up from 29 percent in 2014.

While 2017 has not matched the heights of the two preceding blockbuster years, the long-term strategic value of M&A transactions remains unquestioned. According to our survey, more than half of the participants estimate that M&A improved their underlying earnings per share (EPS) by between 3 and 4 percent over the past three years. Furthermore, almost three-quarters (72 percent) of respondents say that their EPS was either on target or above target.

Respondents were more divided on the impact of the Administration's more protectionist policy aims. Many respondents were concerned about the disruption to long-term trading and economic ties. "The possibility of turbulence in our financial structure is an issue," says the strategy director of a TMT firm. "We're in our comfort zone right now. Any change could adversely affect us."

During his presidential campaign, Donald Trump called for a 45 percent tariff on imported goods from China. However, at the time of writing, such a measure has yet to be implemented.

An imposition of tariffs on Chinese imports would decrease M&A appetite for 47 percent of respondents, with 12 percent saying it would dent their interest in dealmaking significantly. On the other hand, more than half of respondents say that the imposition of tariffs on goods from China would have either no impact on their M&A plans or boost their appetite for deals.

2. The ones that got away

One contributing factor to the fall in overall deal activity in 2017 is the number of deals that have failed to complete. A surprisingly high number—70 percent—of survey respondents say that during the last 24 months, their company had announced a deal that subsequently lapsed before completion.

The perceived increase in lapsed transactions can be attributed to a number of factors. The fact that overall deal value is down suggests that vendors and buyers are less exuberant and thinking more closely about pricing and the strategic rationales for transactions.

Regulatory intervention has also put transactions on ice. China-backed Canyon Bridge Capital Partner's US$1.2 billion bid for Lattice Semiconductor Corporation was blocked by President Trump on CFIUS's recommendation. Meanwhile, the Federal Trade Commission has filed a complaint aimed at stopping chemical producer Tronox from acquiring Cristal's titanium dioxide business. The mega-merger between AT&T and Time Warner is also being challenged in the courts and has yet to close.

3. NAFTA hangs in the balance

Withdrawing from the North American Free Trade Agreement (NAFTA) would have a negative impact on US dealmaking, according to our survey.

Over half of respondents indicate a withdrawal from NAFTA would dampen appetite for M&A, including 8 percent who say it would prompt a significant decrease. "Withdrawing from NAFTA will have an effect on trade relations with neighboring countries, and this will impact deals that are in the pipeline," says a corporate development director at a TMT company.

With little progress achieved in the first five rounds of negotiations held with Mexico and Canada—and just two more in the pipeline—concern is mounting surrounding the future of trading links between the three countries. "We have seen no evidence that Canada or Mexico are willing to seriously engage on provisions that will lead to a rebalanced agreement," US Trade Representative Robert Lighthizer said in a statement.

The top-three US M&A hotspots

Despite concerns surrounding upcoming regulation and political uncertainty, just over two-thirds (67 percent) of respondents say the US will be the most attractive country for acquisitions during the next 12 months, with the next closest candidates—the UK, India and China—registering less than 10 percent each.

Half of those polled say positive economic indicators make their country of choice the most attractive market, while 23 percent cite attractive company valuations and 19 percent choose reliable infrastructure. Strong economic fundamentals within the US explain this attraction. An estimated GDP growth of 2.5 percent in 2017 and 2018 and soaring stock markets have produced a favorable environment for deals.

Despite uncertainty surrounding Brexit trade talks, the UK remains a popular choice for US investors, drawn to attractive valuations and high-quality assets. The US$12 billion acquisition of UK firm Worldpay by US payments processor Vantiv highlights this trend. 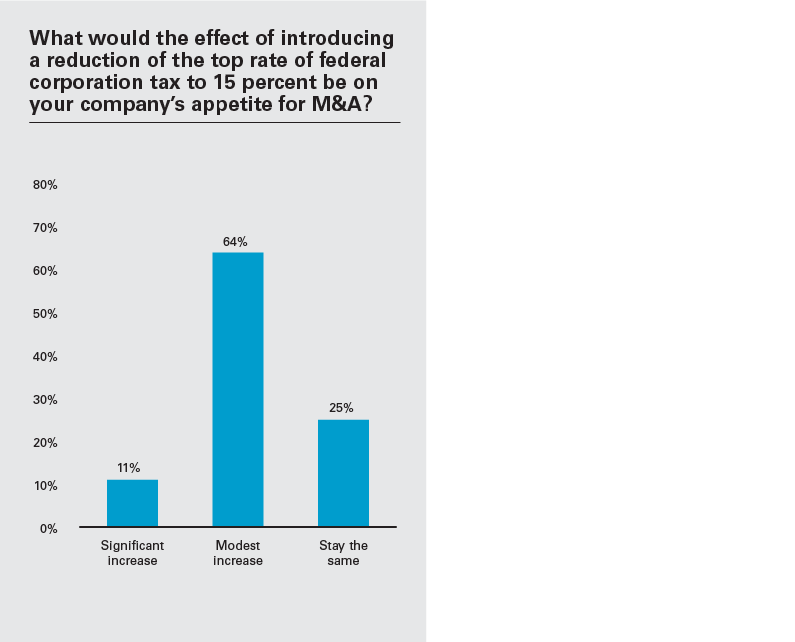 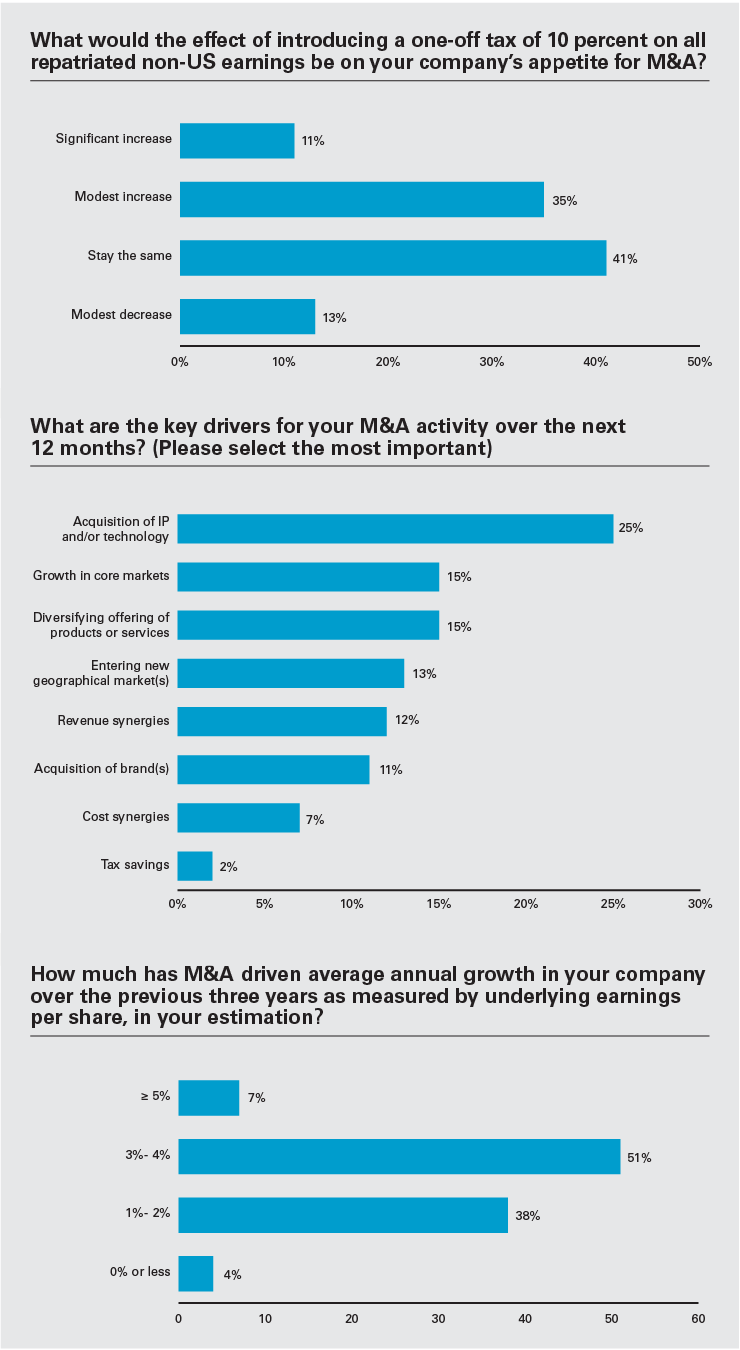 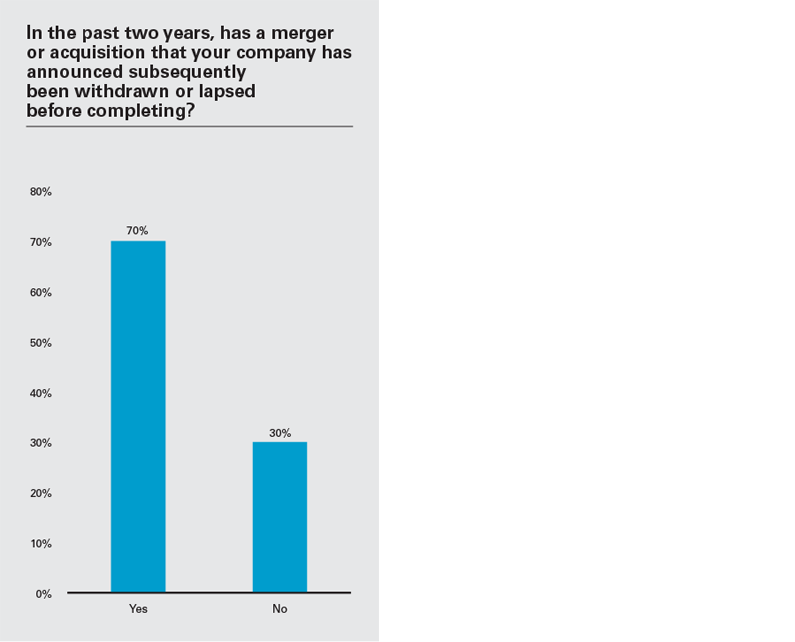 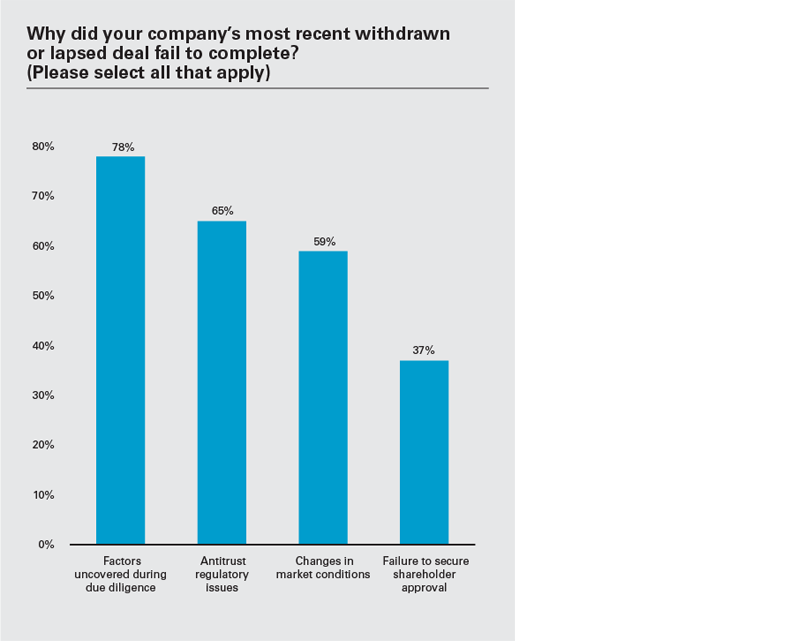 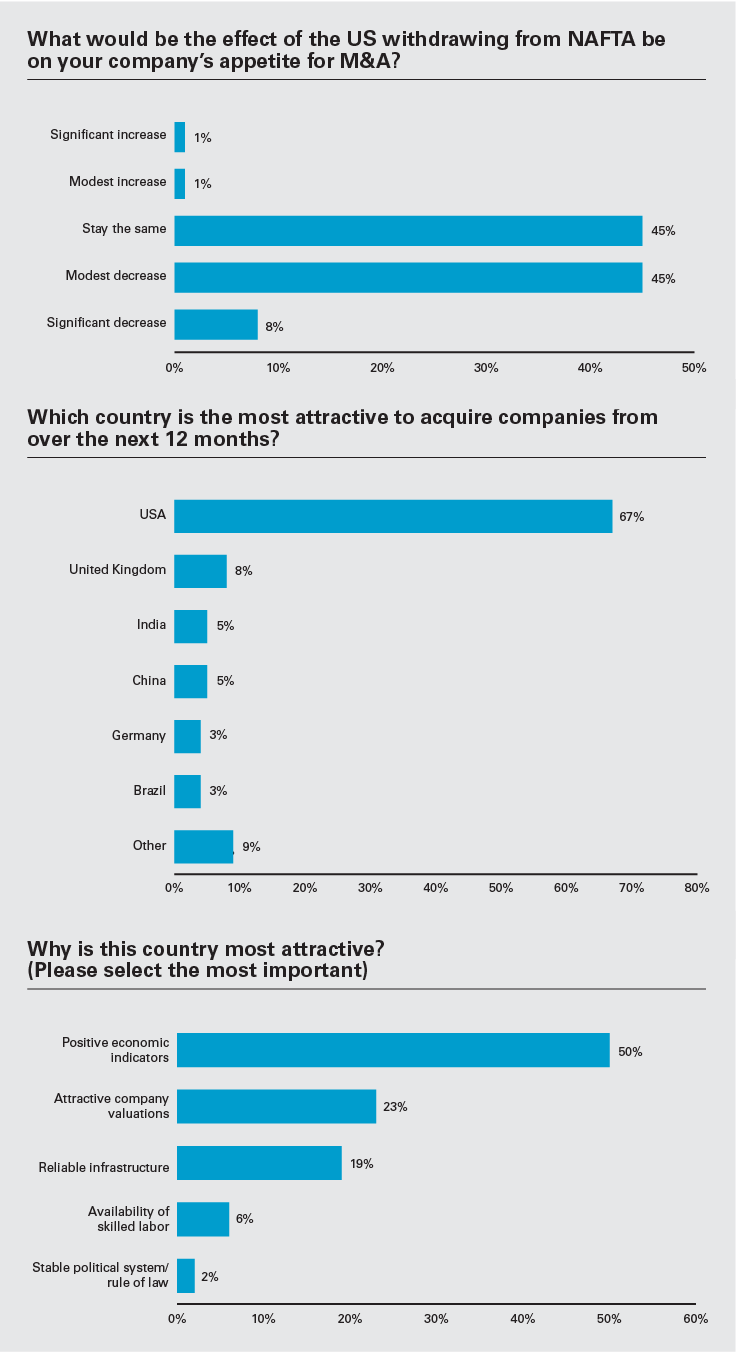