SEC is seeking public comments in its concept release in an effort to simplify, harmonize and improve the existing exempt offering framework.

On June 18, 2019, the Securities and Exchange Commission (the "SEC" or the "Commission") issued a “Concept Release on Harmonization of Securities Offering Exemptions,” requesting public comment to assess the current available exemptions from registration under the Securities Act of 1933, as amended (the "Securities Act"), and to consider whether revisions would be required to promote capital formation while maintaining investor protection. Considering the depth and complexity of this concept release, an overhaul of the existing exempt offering framework may have a significantly greater impact than the Securities Offering Reform of 2005.

The concept release has been previewed by the SEC over the last year, including in an August 2018 speech by Chairman Clayton, during which he discussed the SEC’s objective to review the exempt offering framework “to ensure that the system as a whole, is rational, accessible, and effective.”1 Describing the existing framework as an "elaborate patchwork,"2 he emphasized the need to understand the complexity of the current framework and whether changes would be required to rationalize and streamline the framework, as well as remove any complexities created by overlapping exemptions, which may create confusion in trying to identify “the most efficient path to raise capital.”3

Specifically, the concept release raises 19 questions for comment, consolidated below in the following key thematic topics:

Exemptions from registration have evolved from Congress’s initial recognition in 1933 that in “certain situations there is no practical need for registration or the public benefits from registration are too remote.”4 Courts later recognized that offers of securities may be exempt from registration, but offerees must be able to fend for themselves.5 Recent revisions and expansions have modernized the exempt offering regime, including Regulation Crowdfunding, Regulation A, expanded options for issuing securities to employees as compensation and allowing general solicitation to accredited investors.  However, the question now being tackled is whether a full overhaul of the current system is necessary to address its complexities or whether the existing framework should be replaced with a more efficient system.

Figure 1 below shows the upward trend in exempt offerings as compared to registered offerings.7 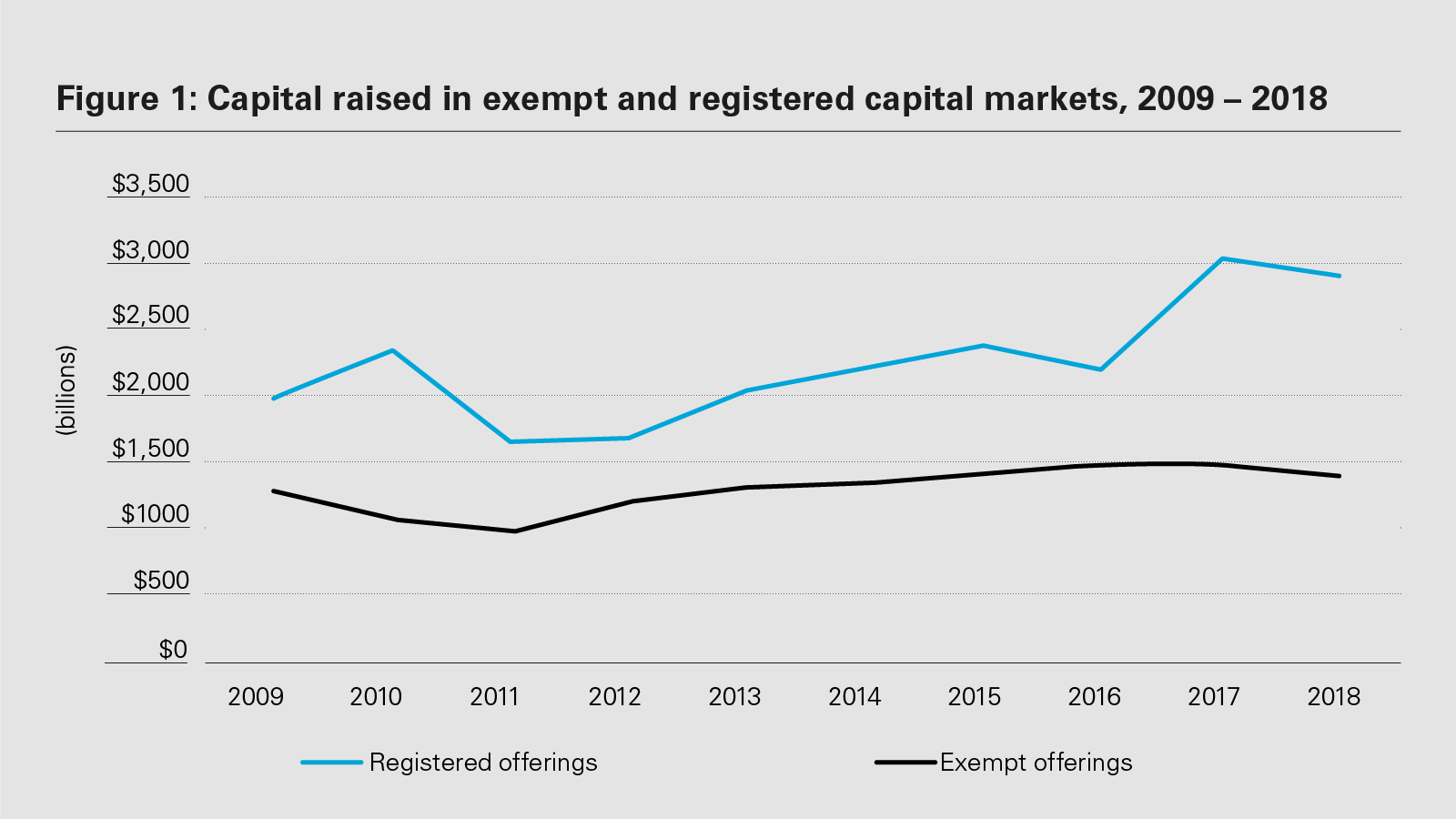 One important observation made by the concept release is the fact that the rise of investments in exempt offerings relative to registered offerings may leave “certain types of investors with fewer investment opportunities than might have been available to them if public markets were used more frequently.”8 The concept release also provides useful statistics on the overall amounts raised in the exempt markets in 2018.9

As the data demonstrates, while the largest amount of private capital was raised in Rule 506(b) offerings, non-accredited investors participated primarily in offerings pursuant to Regulation A, Rule 504 and Regulation Crowdfunding.10 In light of such data, SEC is seeking comments on whether it would be consistent with capital formation and investor protection to increase the range of investment opportunities available to investors considered to be non-accredited.

The concept release states that in 2015, 13 percent of US households qualified under the current definition of an accredited investor under Rule 501(a)(6) of Regulation D. The concept release adds that the concept of accredited investor has implications outside of the existing exemptive regulatory framework and has been adopted by other rules and regulations.11 Since the release of the Accredited Staff Report,12 the Commission has received a number of recommendations regarding potential revisions to the definition of an accredited investor. The Advisory Committee on Small and Emerging Companies recommended, among other things, that the pool of accredited investors should be expanded to include individuals who have tested knowledge and understanding in the areas of securities and investing, or specific industry or issuer knowledge, cautioning meanwhile that any non-financial criteria should be ascertained with certainty as “simplicity and certainty are vital to the utility of any expanded definition of accredited investor.13 Recognizing the market participants’ desire to expand the accreditation process outside of the financial criteria, the SEC is seeking comment on how to expand, narrow or revise the definition of an accredited investor to also address the seeming imbalance of the current definition, which provides a natural person just above the qualification thresholds the ability to invest without limit, but fully restrict a person just below the threshold from investing at all.

While another proposed recommendation is to allow key or managerial employees affiliated with the issuer to qualify as accredited investors,14 it is not immediately apparent if such recommendation would garner support since employees can generally invest in the equity of the issuer through employee compensation plans.

The concept release questions whether revising the framework may help combat investor and geographic disparity, a topic also raised by Chairman Clayton.15 With incomes and net worth measuring highest in the Northeast and the West, those regions also experience the higher concentrations of accredited investors.16 During the 37th Annual Government-Business Forum on Small Business Capital Formation, which took place in Ohio on December 12, 2018, Commissioner Peirce queried if any parts of the current regulations reinforce concentration of start-ups and capital formation in Silicon Valley instead of Ohio, Kansas and South Dakota, even though all locations have “smart [and] inventive people.”17

In addition to geographic disparity seen in current exempt offerings, the type of investor in exempt offerings also lacks diversity. Some exemptions permit non-accredited investors to invest, but require significant disclosure by the issuer. In a 506(b) offering, sales to non-accredited investors require disclosure akin to that of a Form S-1 registration statement for a registered public offering.

In seeking public comment, SEC is asking, among other things:

Every time an issuer is engaging in multiple securities transactions, the integration doctrine requires that the issuer perform an analysis to determine whether those transactions should be “integrated,” or considered part of the same offering.  The integration doctrine has evolved over time with staff providing guidance as recently as 2015 and 2016 in the context of concurrent exempt offerings involving Regulation A, Regulation Crowdfunding and Rules 147 and 147A.  The concept release states that market participants have requested clarification of the relationship between exempt offerings in which general solicitation is not permitted and exempt offerings such as Rule 506(c) where general solicitation is permitted.  In light of the above, the SEC is seeking public comment, including, but not limited to:

The concept release acknowledges that secondary market liquidity for investors in small and medium-sized issuers is integral to capital formation in the primary offering market.  Limited secondary market liquidity can impact issuers’ ability to attract investors and incur a higher cost of capital, while also impairing an investor’s ability to diversify its portfolio over time.  The SEC has received comments suggesting that the safe harbor provided by Rule 144 be revised as the current holding periods are burdensome given the trend for companies to remain private for longer.  Furthermore, certain security holders who are unable to meet the conditions of current Rule 144, end up incurring significant transaction expenses to sell outside of the Rule 144 safe harbor.19 In addition, exemptions by states for secondary sales are not uniform, and market participants reported to the SEC that this inhibits efficiency in secondary sale markets.20 In light of the above, the SEC is seeking feedback on how to revise restrictions on secondary sales to facilitate capital formation and promote investor protection, including, but not limited to:

The concept release does not discuss direct changes to Rule 144A itself. However, some of the proposals would indirectly impact Rule 144A offerings, as such as reducing the holding period under Rule 144. Such a reduction might help enhance secondary trading liquidity after Rule 144A offerings, particularly when the securities are 144A-for-life (i.e., without registration rights). The release also requests comment as to whether there should be additional resale exemptions.

The concept release requests public comments on a number of other exemptions available under the Securities Act and promulgated rules, including Regulation A, Regulation Crowdfunding and Rule 504. The public comment period will remain open for 90 days following publication in the Federal Register. 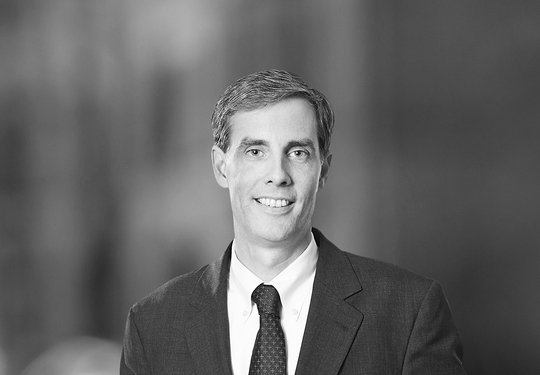