Defying all odds, US M&A value rose in the first half of 2019. Total deal value climbed 9 percent on the first half of 2018 to US$913 billion, making it the best-performing first half for US M&A on record. Yet, when it comes to volume, the picture is significantly less rosy—there were 2,531 deals in H1, a 21 percent drop over the same period.

On a percentage basis, domestic activity tracked the overall figures fairly closely. Domestic deal volume dropped 22 percent to 2,090 deals, and value rose 8 percent to US$777.3 billion in the first half of the year.

But inbound activity significantly outperformed outbound activity in H1 2019, indicating the US remains a safe place for investment. Though the number of inbound deals fell 16 percent to 441 deals, value climbed 19 percent to US$135.4 billion.

Outbound activity, on the other hand, dropped—value fell 4 percent to US$191.2 billion, while volume dropped 22 percent to 551 deals.

But even in the megadeal market there has been a divergence between strategic purchasers and private equity investors. While private equity deal value activity has grown quarter-on-quarter in the first half of 2019, the recovery has not been strong enough to match H1 2018’s figures.

Corporate deals, by contrast, are still going ahead, most notably in sectors and industries where companies are either under pressure to consolidate or facing disruption and challenges from new entrants and evolving technologies.

This reflects a macro-environment that provides a supportive backdrop for CEOs keen to engage in M&A. The US economy has continued to grow more strongly than many of its peers; the labor market is in good condition; and, though the leveraged finance market showed signs of stress early in the year, tensions have since eased and financing is available, particularly for good deals. As long as the US economy continues to post healthy growth figures, strategic dealmaking should continue.

That said, there is now some evidence that investor enthusiasm for M&A is beginning to wane. Several of the largest deals announced during the first half of the year met a mixed reception in the markets, with shareholders notably more skeptical about such transactions than in the recent past.

And policy and politics present an increasingly challenging context for M&A, with the Trump administration’s ongoing disputes with China—as well as question marks over trade with Mexico and Europe—casting a shadow.

Uncertainty about a possible trade war with China is a particular challenge for dealmakers attempting to build a medium-to long-term business case for transactions. The dispute has already begun to have a direct impact—most notably on Chinese investment into the US, where regulatory scrutiny of such deals has increased significantly.

For now at least, inbound M&A has remained strong, though deal numbers might have been significantly higher if Chinese buyers had felt more able to pursue investment opportunities in the US. 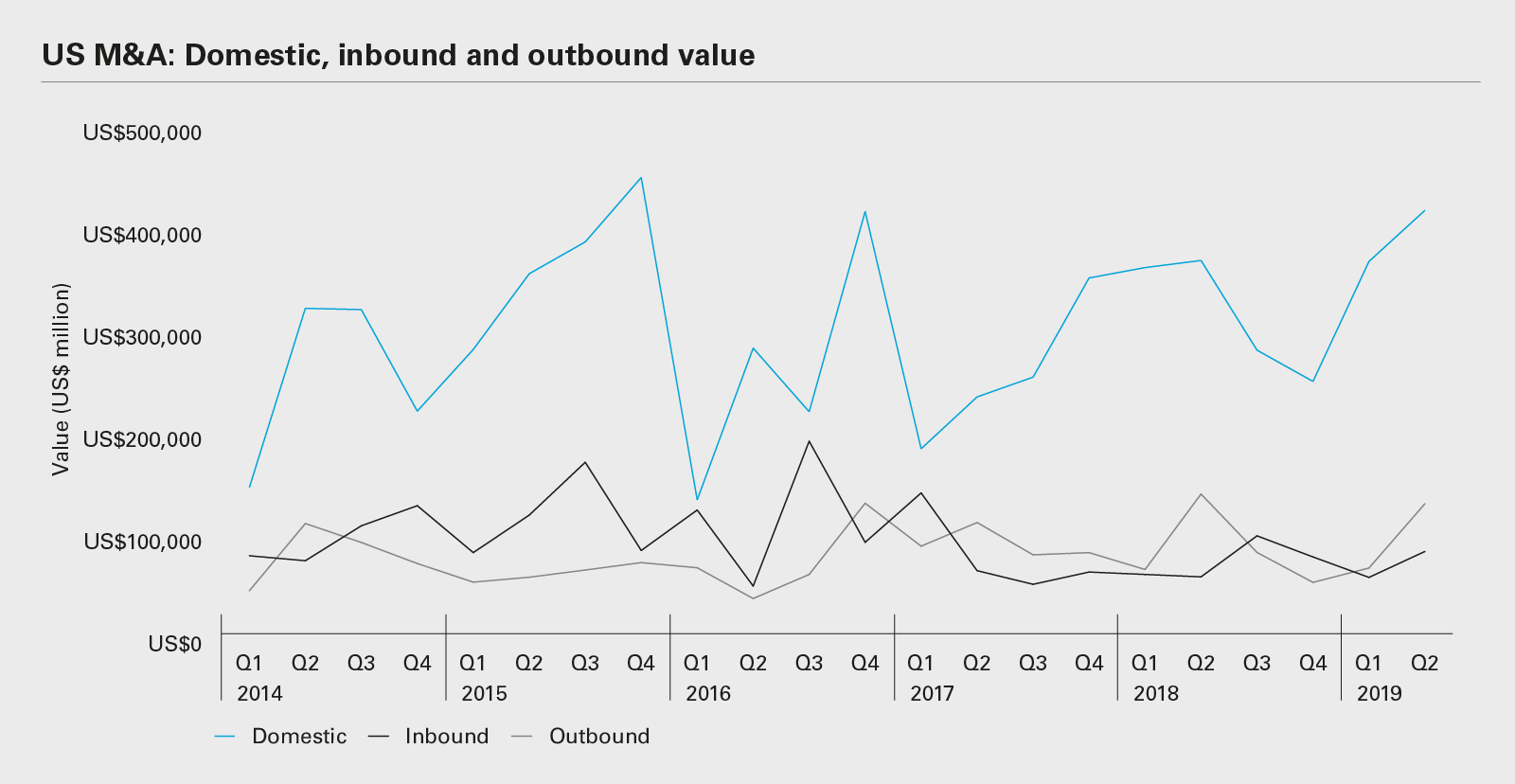 Elevated risk and anxiety do appear to have had an effect on US companies’ appetite for overseas acquisitions, given the significant slowdown in outbound M&A seen during the first half. For corporates pursuing an acquisitions strategy, domestic deals have felt more comfortable in recent months—all the more so given the strength of the US economy relative to that of Europe and Asia-Pacific.

In some sectors, key drivers of M&A remain as strong as ever. In the healthcare market, for example, big pharma continues to view dealmaking as a vital tool for acquiring new drugs, with biotech businesses representing attractive targets. In the technology sector, meanwhile, M&A is often the only way for large companies to cope with the accelerating pace of digital transformation.

Political uncertainty, particularly around the US’s trade policies, and valuation anxiety have the potential to act as a brake on dealmaking. Any downturn in the US economy would have an even more significant impact. This is a risk to weigh carefully, given that the yield curve in the bond market continues to be inverted. An inverted yield curve has been a leading indicator of recession risk over the decades, though not all economists accept its inevitability.

Absent a recession, US M&A activity should remain healthy by historical standards in the second half of 2019.

Is the US antitrust paradigm shifting?

Prior to his inauguration, President Trump’s administration was widely expected to take a more laissez-fair approach to antitrust than its immediate predecessors, but things have turned out differently. The administration’s attempts to challenge the merger between AT&T and Time Warner, though unsuccessful following a series of legal defeats, are emblematic of a desire in Washington to reorient antitrust regulation.

The current framework focuses on the potential for harm to consumers, primarily through the lens of pricing, but an increasing number of policymakers are exploring approaches to antitrust that are based on a broader conception of market power.

The trend has been embraced by leaders on both the right and left sides of the political spectrum. Elizabeth Warren, a prominent Democratic Presidential candidate, is at the center of an increasingly vocal campaign for the break-up of US technology giants. The argument is that there are many ways—including, but not limited, to pricing—that large companies may leverage their size and influence to manipulate markets in their favor, often at a cost to consumers and society. Some argue that antitrust should be used to address issues related to income inequality, wage growth and unemployment.

These ambitions may require legislative change, and the questions of if, when and how the US might embrace full-blooded regulatory reform remain unanswered. But it is clear that the implications of a more interventionist approach to antitrust are significant for very large businesses considering M&A in any sector—not just the high-profile tech giants.

Businesses now contemplating deals should be conscious of the changing mood. With regulators potentially erecting more antitrust hurdles, large businesses will need to be able to defend their transaction from different types of scrutiny—not just the potential impact on consumer prices.

International acquirers of US businesses face increasingly tougher regulatory challenges as they seek to get transactions across the finish line, with many more deals—including minority investments—now being evaluated from a national security perspective following reforms to the US inbound foreign direct investment regime, better known as the Committee on Foreign Investment in the United States (CFIUS) review process.

Amid tough rhetoric on protecting US interests, President Trump last year signed into law the Foreign Investment Risk Review Modernization Act (FIRRMA), the first update in more than a decade to the statute that regulates the CFIUS review process. Widely seen as a response to Chinese investment in key US sectors, FIRRMA closes gaps in the law—the reform extends CFIUS’s reach in the real estate sector and into minority “non-controlling yet non-passive” investments, for example. Most significantly, under FIRRMA, a pilot program was launched requiring mandatory filings in certain deals involving “critical technologies.” The impact has been profound, with foreign investors spending more time evaluating the application of the pilot program to their transactions.

The increased relevance of the CFIUS review process was further highlighted by the continuing tough stance CFIUS took during the first half of the year. In addition to a number of high-profile cases where it put pressure on Chinese acquirers to divest previously acquired businesses, CFIUS also announced its first financial penalty, a US$1 million penalty charged to unnamed parties for repeated violations of a mitigation agreement signed in 2016.

Retaining key staff is a crucial challenge in most M&A transactions, particularly in cases when human capital represents a large percentage of deal value.

In this context, the growing legislative backlash against non-compete clauses that are regarded as overly restrictive presents a serious challenge for acquirers. In Massachusetts, for instance, the ability to prevent key staff working for competitors has been significantly diminished at the end of 2018. A number of other states are considering similar legislation. Such legal impediments to the enforceability of non-competes detract from their usefulness as an appropriate retention tool.

As a result, acquirers will have to consider more novel approaches to how to increase retention of key executives in connection with deals.

Succession planning and other social issues of post-acquisition management control are often the key elements of this equation. Getting agreement on who will take which senior roles post-acquisition is a crucial part of any deal negotiation.

Acquirers are also exploring options such as holdback provisions that require key executives to remain with the business for a defined period if they are to receive the full allocation of deal proceeds otherwise due as part of the deal. In the past, sellers have been reluctant to accept holdback provisions, but they are more common and some sellers are slowly embracing them.