Confidence, cash and tax cuts: The US M&A landscape in 2018

The US M&A market delivered another year of strong performance in 2018. Though deal volume dipped 2 percent year-on-year to 5,682 deals, deal value was up by 15 percent over the period, to US$1.5 trillion

A number of large deals in a thriving domestic M&A market drove the rise in value. The ten largest US transactions recorded over the period were all domestic deals, and domestic deal value climbed 23 percent year-on-year to US$1.2 trillion.

Domestic dealmakers have drawn confidence from the steady growth of the US economy, low unemployment, business-friendly tax cuts and strong stock market performance.

The ten largest US transactions recorded in 2018 were all domestic deals, and domestic deal value climbed 23 percent year-on-year to US$1.2 trillion.

Both the S&P 500 and Dow Jones Industrial Average reached record highs in 2018 and according to the US Department of Commerce, GDP grew by 4.2 percent and 3.5 percent in Q2 and Q3 respectively. Unemployment is at 3.7 percent, a 48-year low, and average hourly earnings have climbed.

Business has also benefited from the Trump administration’s tax cuts, which reduced the corporate tax rate from 35 percent to 21 percent and allowed US corporates to repatriate cash held overseas at reduced rates. Warren Buffett’s investment vehicle, Berkshire Hathaway, for example, said its portfolio had received a net gain of around US$29 billion as a result of the tax cuts. But although solid domestic economic fundamentals have supported US dealmaking, the M&A market has also proven more volatile and unpredictable in 2018. The White House’s decision to impose steel and aluminum tariffs on China and Western allies, and a tense renegotiation of the North America Free Trade Agreement (NAFTA), which has been renamed United States-Mexico-Canada Agreement (USMCA), have caused prolonged periods of uncertainty, prompting large swings in stock markets. The Dow Jones Industrial Average suffered its largest single-day fall in February, and the Vix, an index tracking stock market volatility, reached its highest level since the Chinese currency crisis of 2015. Both the Dow and the S&P 500 closed 2018 weaker than they started it.

While the appetite for M&A remains strong, volatility and uncertainty make it more difficult for dealmakers to reach agreement on valuation. And against a backdrop of macroeconomic tensions, confidence in the future performance of targets will be even more important. 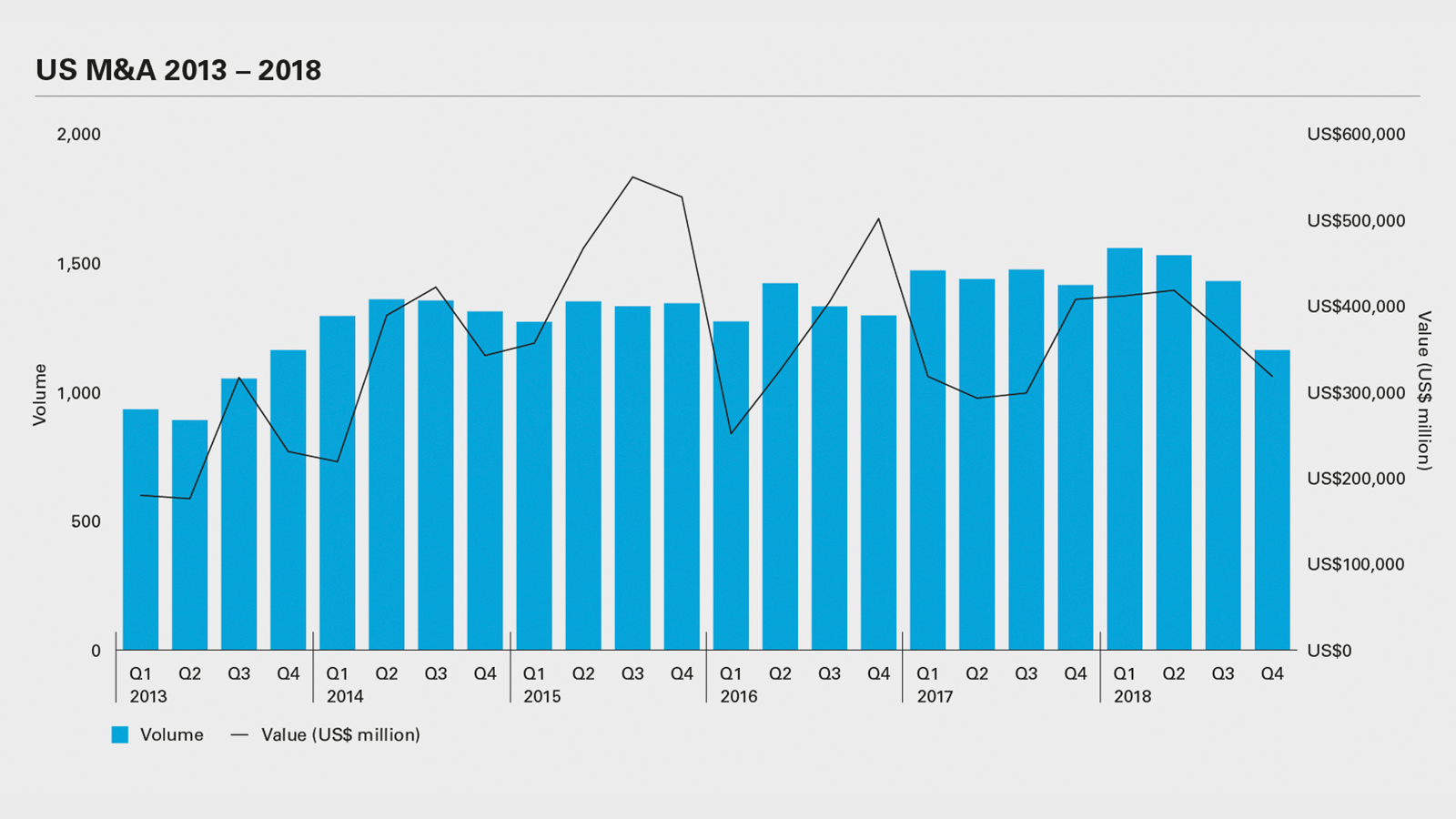 The expansion of CFIUS’s jurisdiction under a new law enacted this past summer has been cited as one of the reasons for the fall in inbound US M&A activity in 2018.

In August of 2018, the president signed the Foreign Investment Risk Review Modernization Act (FIRRMA) into law. The legislation—the first statutory overhaul of the CFIUS process since 2007—expands the committee’s jurisdiction in response to an evolving national security landscape.

Deals in which foreign investors would have certain non-controlling yet non-passive rights, such as the right to a board seat or observer, access to material non-public technical information, or certain substantive decision-making rights, in addition to control transactions, are now included in CFIUS’s jurisdiction. The legislation also captures real estate purchases and leases for properties close to certain sensitive government locations. FIRRMA also extends the CFIUS review period and grants the committee the power to run pilot programs, which allow it to test provisions in FIRRMA  before new regulations are issued. One such pilot program has required that short-form declarations to CFIUS become mandatory for certain technology deals, whereas historically review was at least ostensibly a voluntary process.

FIRRMA’s expansions will not shift CFIUS’s focus away from deals in the defense sector and those involving critical technologies and infrastructure, but the changes reflect mounting concerns with inbound investment from China. In addition to its concerns about critical technologies and critical infrastructure, CFIUS is increasingly focusing on real estate assets in close proximity to certain sensitive US government installations and any businesses that have access to large amounts of sensitive data on US citizens, along with other areas that may be sensitive for national security reasons.

Inbound M&A into the US has slowed as a result of this volatility, falling by 10 percent year-on-year in 2018 to US$277.5 billion. The drop in inbound M&A has been exacerbated by tougher regulations and checks on foreign buyers investing in the US. In March, President Trump blocked, on national security grounds, the hostile bid for US chipmaker Qualcomm by rival Broadcom, then based in Singapore. And in April, the US government banned US companies from dealing with Chinese telecoms equipment manufacturer ZTE.

Broadcom was later allowed to acquire New York–based CA Technologies in an US$18 billion megadeal after redomiciling to San Jose, but the environment for foreign buyers investing in the US has become less friendly. In August, CFIUS had its scope broadened significantly when FIRRMA was signed into law. It is no coincidence that inbound M&A has fallen as these measures have been put into action. Inbound M&A from Chinese bidders was down 66 percent by value year-on-year, to US$3 billion, while volume was down 40 percent to 38 deals. With US economic policy following an increasingly protectionist path, deals by US dealmakers overseas have also stumbled in 2018. Outbound deal value has fallen by 8 percent year-on-year to US$324 billion in 2018.

Dealmakers will still see the value in cross-border transactions, but geopolitical and trade issues are making the landscape increasingly difficult to navigate. 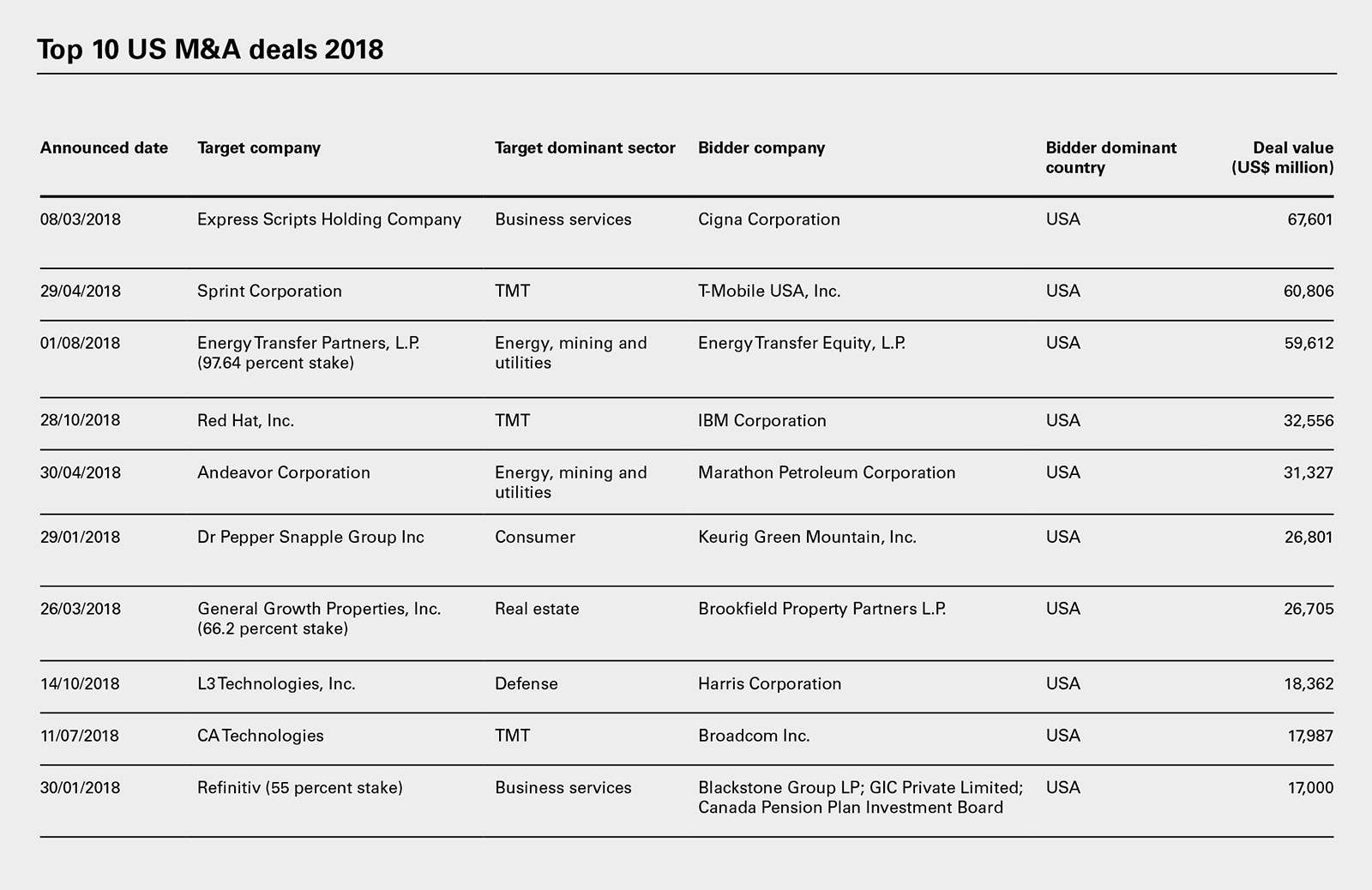 Despite the mixed picture for M&A, however, large strategic deals across all sectors have continued. After a period of low oil prices, activity in the energy, mining and utilities (EMU) sector has revived, with M&A from this sector accounting for two of the ten largest deals in 2018.

A stable oil price (for much of the year) encouraged higher production from US shale fields, which sparked deals such as Marathon Petroleum’s US$31.3 billion acquisition of rival Andeavor. Restructuring activity in the energy industry, which has seen companies unwind tax-exempt corporate structures called master limited partnerships (MLPs), has also contributed to overall energy deal value. 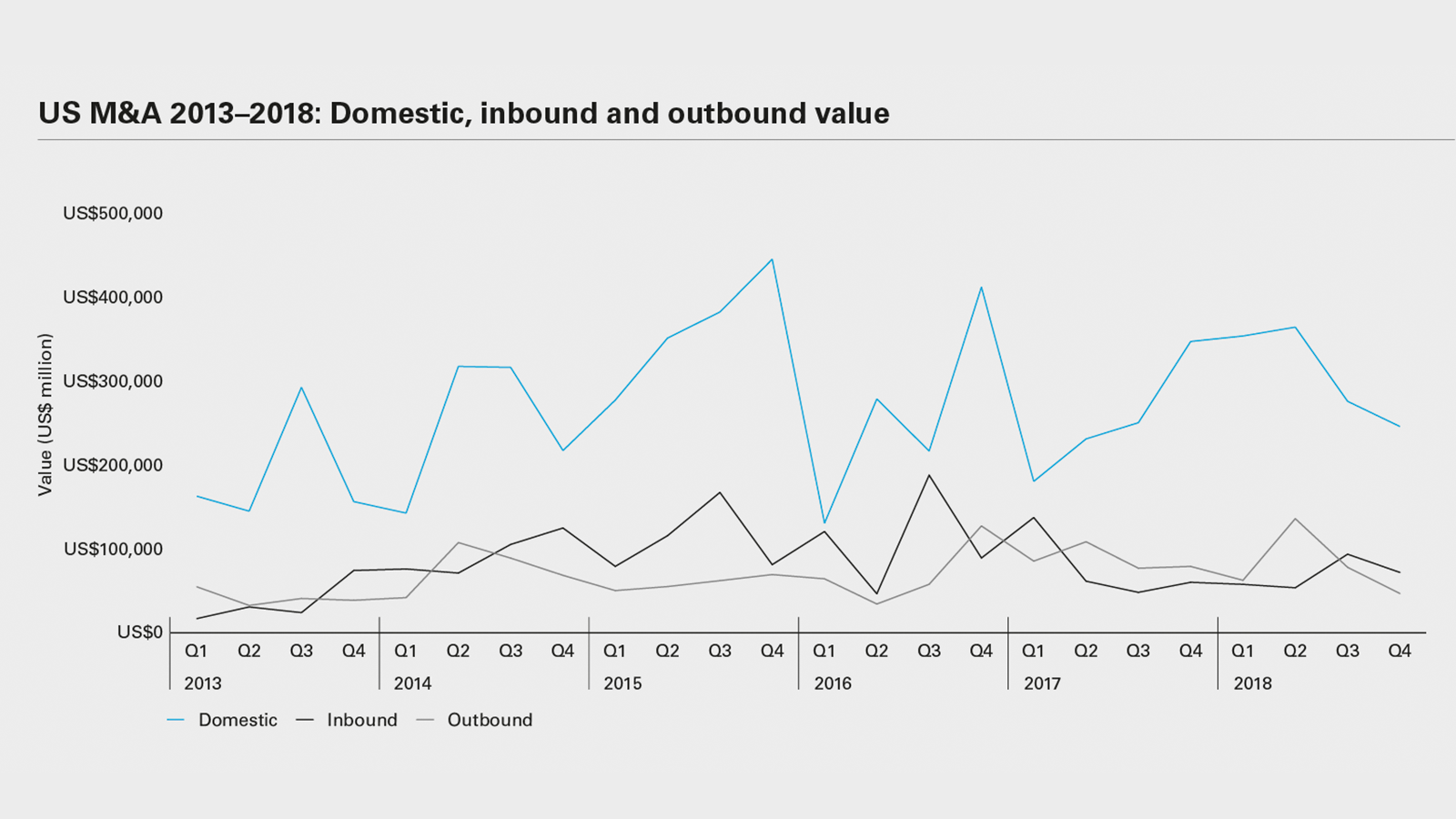 Divestments and spin-offs have been a notable feature of US M&A activity in 2018.

Nestlé sold its confectionary business in the US to Ferrero for US$2.8 billion at the start of the year; Walmart agreed to a deal to offload its UK grocer ASDA; and GE chief executive John Flannery has outlined a divestiture strategy that will see the industrial conglomerate focus on its core aviation, power and renewables units.

As the cycle peaks, other companies are likely to follow suit, focusing on their best-performing divisions and carving out non-core assets.

Retaining and incentivizing key management, however, can be difficult after a spin-off or divestiture, especially when managers are tied to the parent company’s stock. How to manage the transition and entice managers to stay post-transaction is something the parties must consider, as are the costs these types of incentives may add to the deal.

Each transition incentive agreement is unique to the transaction, but usually involves the new buyer either replacing the incentive, honoring a previous incentive plan, or the seller agreeing to pay out unvested incentives on the closing of the deal.

Who stays, who goes?

A further layer of complexity comes into play when deciding which employees need to go with the divested entity and which ones should stay.

The type of buyer will affect employee moves and can influence the overall valuation. A strategic buyer is less likely to retain back-office teams such as accounting, IT and HR, while a financial buyer will likely need those resources.

These considerations will need to be addressed in an employee matters agreement. One way to handle these issues is to set up a turnkey operation with all the back office in place, and then it is presumed to be at the buyer’s cost to change anything post-spin-off/divestiture. This is most common when there is a spin-off via IPO.

Among the other major challenges involved in finalizing spin-off arrangements: setting up incentives for executives when the spun-out entity is carved out from a listed business; convincing key staff to stay on when the buyer is an unknown entity; and understanding any union obligations where applicable.

Should divestment volumes increase, as many anticipate, sellers and buyers will have plenty of employee issues to consider when attempting to get these deals over the line.

The TMT sector, which has been one of the most active industries for M&A since the financial crisis as mobile, content, internet and data services converge, has had a busy period. Sprint and T-Mobile, which called off merger talks a few years ago, have now reignited their plans with a proposal for a US$60.8 billion tie-up. The deal still requires Department of Justice (DOJ) and Federal Communications Commission (FCC) approval, but after the Supreme Court ruled against a DOJ suit to block the merger between AT&T and Time Warner, there is optimism that the Sprint and T-Mobile deal can cross the line at the second attempt.

Major strategic realignment in sectors like healthcare have also supported megadeals. The largest US deal of the year, Cigna’s US$67.6 billion acquisition of Express Scripts, followed moves by technology companies to disrupt incumbent players in the healthcare industry. Amazon, for example, has partnered with Berkshire Hathaway and JPMorgan Chase to form a not-for-profit entity that will use big data and other high-tech tools to improve healthcare costs for their employees. Deals such as Cigna’s move for Express Scripts and CVS’s purchase of Aetna for US$67.8 billion show that established healthcare businesses are turning to M&A to build scale and take control of supply chains in response to moves from digital disruptors.

Healthcare is hardly the only sector undergoing change driven by technology, as companies in all sectors are developing tech plays and look to M&A to capture human intellectual capital and intellectual property.

Dealmakers have had to negotiate an unpredictable year and headwinds are building, but corporates will continue to turn to M&A when they see strategic assets that enable them to build scale and respond to shifts in business models.

The US market is set to remain an attractive destination for investors going forward, even with material uncertainty. While a US recession may not be imminent, potential buyers must prepare for one, when considering their M&A strategies.

It is critical for parties to prepare for potential investigations by US and global antitrust authorities in any transaction raising competitive issues, large or small, horizontal or vertical.

While pre-filing has long been standard practice for cases in front of the European Commission and other authorities around the world, this had not been common with the US authorities outside of certain industries. More recently, however, US authorities have been encouraging early discussions in transactions where the parties know there is a high likelihood of competition issues, including encouraging parties to provide voluntary submissions of business documents and information beyond what is required in their filings—and to provide it even before making their merger filings. By doing so, both parties and enforcers hope to address issues earlier in the process to streamline and focus any investigation.

Antitrust authorities are paying closer attention to potential competitive harms from vertical mergers. Both the DOJ and the FTC have investigated and pursued allegedly anticompetitive vertical mergers, the most notable example of which is the DOJ’s attempt to block the merger between AT&T and Time Warner.

The FTC and DOJ continue to favor structural remedies, such as divestitures, over behavioral remedies. Bayer, for example, divested US$9 billion worth of assets, its largest divestment ever, to secure consent for the Monsanto deal. Telecommunications groups CenturyLink and Level 3 sold overlapping aspects of their businesses to obtain clearance, and Alere and Abbott Laboratories recently sold two product lines to receive the go-ahead for their merger. Despite the prevalence of structural remedies, the recent Staples/Essendant settlement is an example of a behavioral remedy—a firewall imposed to prevent access to commercially sensitive data.