While the commodity super cycle is a distant memory, China's recent wave of outbound acquisitions is helping to prop up global mining M&A.

Mining M&A is now a China story. The country has served as one of the few legitimate catalysts for deals since January 2015, closing 20 cross-border mining acquisitions worth approximately US$8.3 billion. The momentum has continued in 2016 with several major offshore acquisitions announced by Chinese firms, particularly in emerging markets, signaling that a level of confidence is returning to the mining sector.

US$8.3 billion
Value of cross-border mining deals completed since 2015

Digging deeper, it's little wonder that the outbound M&A ambitions of Chinese firms correspond with larger forces. The current resources agenda forms a cornerstone of China's near-term economic policy, outlined in the 13th Five-Year Plan. Initiatives including greater urbanisation, cleaner industrialisation and innovation will also fuel the hunger for critical and strategic resources. Additional policy directives such as the transition from a mass-market to a higher-end manufacturing economy will also push an agenda for Chinese companies, both state-owned and privately backed, to aggressively target mining assets in various offshore markets.

In other words, the recent revival of global mining M&A activity is being governed by Chinese activity. In the first half of 2016, rises in global deal value in the sector corresponded directly with a pick-up in announced China outbound deals. In the second quarter alone, Chinese firms announced offshore acquisitions of more than US$4 billion.

This being said, however, the dynamics shaping the sector are shifting. Following the flow of investment shows that the acquisitions and appetite are focusing less on developed markets and are pivoting more towards assets in emerging markets compared to previous cycles. This fact is not surprising. China has long tapped developed markets for hard commodities such as iron ore and bauxite and now finds itself with an overcapacity issue as it offloads excess supply of finished products of steel and aluminium on the offshore market.

Chinese investors now have a heightened level of sophistication and discipline in their approach to acquisitions, compared with deals struck at the height of the commodities boom

While Chinese demand will continue to prop up global mining M&A for the foreseeable future, there are noticeable shifts occurring. The locations of target assets are broadening beyond traditional markets. A shift in target resources is also occurring as Chinese miners take advantage of volatile commodity markets.

To date in 2016, Chinese mining firms are not only diversifying in their acquisition targets but taking a strategic view towards new assets. For example, China Molybdenum's recent deals to acquire copper, niobium, and phosphate assets were clearly cyclical based and executed due to lower commodity prices and with a longer-term view. A similarly strategic tone also characterised smaller ticket deals by Zijin Mining in Africa (copper) and Papua New Guinea (gold).

In 2016 and the years ahead, Africa, North Asia and South America are emerging as major destinations for Chinese acquirers. Australia should also benefit due to established economic ties between the two nations and proximity of transportation. However, the money flow and geographical targets will continue to shift if the tea leaves are to be believed. 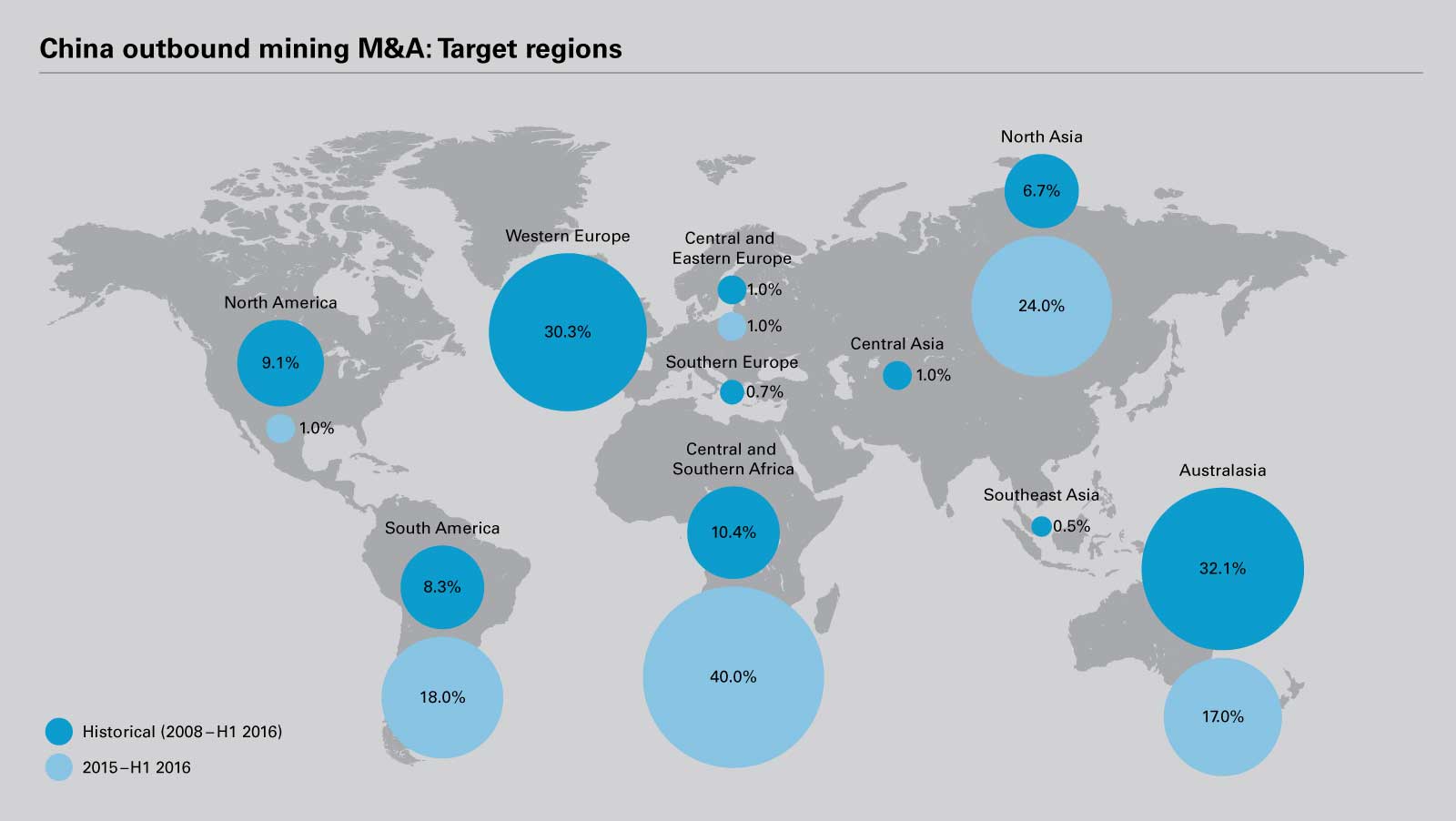 China is raising the stakes in Africa. Earlier in 2016, China Molybdenum announced its acquisition of the Tenke copper-cobalt mine from Freeport-McMoRan in the Democratic Republic of Congo (DRC). The deal was valued at US$2.7 billion, one of China's top cross-border mining deals to date.

Why is this important? One argument is that cobalt is the primary component in making the lithium batteries that power electric vehicles. Per the latest Five-Year Plan, China wants five million electric vehicles on the road by 2020.

The transaction also illustrates that China's mining and resources M&A agenda has begun to overshadow the Africa activities of acquirers from more developed economies. Approximately 40 per cent of all cross-border mining M&A deals originating from China now end in Africa. According to Mergermarket data, China accounted for US$2.7 billion of inbound investment in African mining in H1 2016, which is the largest amount since 2012.

Chinese miners are already proactively looking at acquisition opportunities that will be more accessible once the One Belt, One Road route is up and running

This figure is anticipated to spike in the near term as China flexes its industrial, investment and man- power muscle on the continent to counter the challenge of growing international competition for African assets. The Sicomines consortium and their minerals-for-infrastructure deal with the DRC will also influence the M&A pipeline. More broadly, China's infrastructure know-how will also address one of the major roadblocks to tangible acquisition targets—moving the commodities out of Africa due to lack of transportation routes.

The need for strategic planning and experience to invest in each very different African jurisdiction is a barrier to entry for most, and China is no exception. On the flip side though, more favourable components, such as Zimbabwe's decision to adopt the RMB as its international reserve currency and other economic factors such as low barriers to entry and access to the resources, particularly copper, will give the majority of Chinese acquirers confidence.

North Asia, specifically Mongolia, is one of the fastest-growing recipients of Chinese mining money. After inbound M&A into the country disappeared almost completely between 2012 and 2014, resource-rich Mongolia opened its doors again last year and erased memories of the thwarted acquisition of Mongolia's South Gobi Resources by Chalco in 2012. Watchers are now anticipating the resumption of M&A deals following the Trade Development Bank of Mongolia's recent US$500 million deal to acquire gold, copper and iron ore mining interests from Russia's Rostec.

Little conversation of M&A in Mongolia can exist without China going forward. Economically, China has for years been Mongolia's largest trading partner and largest source of foreign investment at 30 per cent. Furthermore, mining accounts for one-fifth of GDP and 95 per cent of exports, the majority of which go south to China. Hence, the interest by numerous Chinese firms in the mining assets of its northern neighbour.

More recently, several factors have changed the view on the ground in Mongolia, opening the door to further M&A activity in the country's mining sector. Firstly, Mongolia is finalising the agreement with China and Japan to hand over management of state-owned Erdenes Tavan Tolgoi coal mine, which could potentially open more doors to Chinese mining enterprises.

Secondly and more sweepingly is the One Belt, One Road initiative. The Chinese government has identified the China-Russia-Mongolia economic corridor and has committed to promoting practical cooperation on projects, including railways, roads, energy resources, logistics, transportation and agriculture. This has clear implications for mining firms looking northward.

The investment rationale is another factor that will likely drive a more consistent flow of transactions in Mongolia.

In particular, there is speculation that Chinese firms will aggressively target Mongolian copper and coal interests to support infrastructure projects and state– sanctioned growth industries. This fact is further supported by Zhongrun Resources Investment Corp. of China's agreement to acquire the entire share capital of Iron Mining International for US$1.95 billion in 2015.

South American mining transactions have traditionally been dominated by North American acquirers. With a significant decline in inbound M&A starting in 2014, South America's mining industry hasn't been on the radar of Chinese firms typically, but attitudes are changing.

Approximately 18 per cent of all outbound M&A deals from China since 2015 have involved South American targets. China Molybdenum's US$1.5 billion acquisition of Anglo American's Brazilian niobium and phosphate assets is indicative of this mindset change. Given large copper resources in markets such as Peru and Chile and the depth of the so-called "lithium triangle"(Chile, Argentina and Bolivia), all necessary as China starts to secure reserves needed to support hi-tech manufacturing, South American miners will likely receive more attention from potential Chinese buyers into 2017.

Elsewhere in the Pacific Rim, Australia continues to prove a reliable hunting ground for China's mining corporations. Corporations are well established in Australia, and from a high base, Chinese investment has dropped sharply since 2011 (US$3.4 billion) to only US$894 million in 2016 to date. However, investments in Australia are moving up the value chain away from iron ore towards non-ferrous metals like gold, lithium and copper. Regardless, the market is familiar to Chinese investors, accounting for 17 per cent of deal value in H1 2016.

In contrast, North American deals continue to elude Chinese miners. The region accounted for less than 1 per cent of total deals due to factors such as foreign ownership restrictions.

What's next for China?

The billion–dollar question remains: how sustainable is China's outbound M&A surge into the global mining sector? For the foreseeable future at least, as commodity prices remain underwhelming and national economic policies such as the 13th Five-Year Plan and One Belt, One Road gain traction, it is difficult to predict any meaningful pullback from China in their search for offshore mining assets.

While there are clearly limitations to Chinese demand of hard commodities, as evidenced by its strategy of offloading excess steel surplus, demand will become more niche. Mid-tier gold mining remains a possible target in markets like Australia and given the currency placed on next-generation technologies that tackle emissions, copper assets will continue to hold Chinese interest, particularly in markets like Africa.

There is also the infrastructure story with China as patron to nations along the ancient Silk Road. Megaprojects outside of their borders will suck up some of the excess steel surplus, but to add credibility to the One Belt, One Road infrastructure master plan, won't be completed with finite domestic resources. For these reasons and many others, there is cause to remain confident that the current rebound has legs. 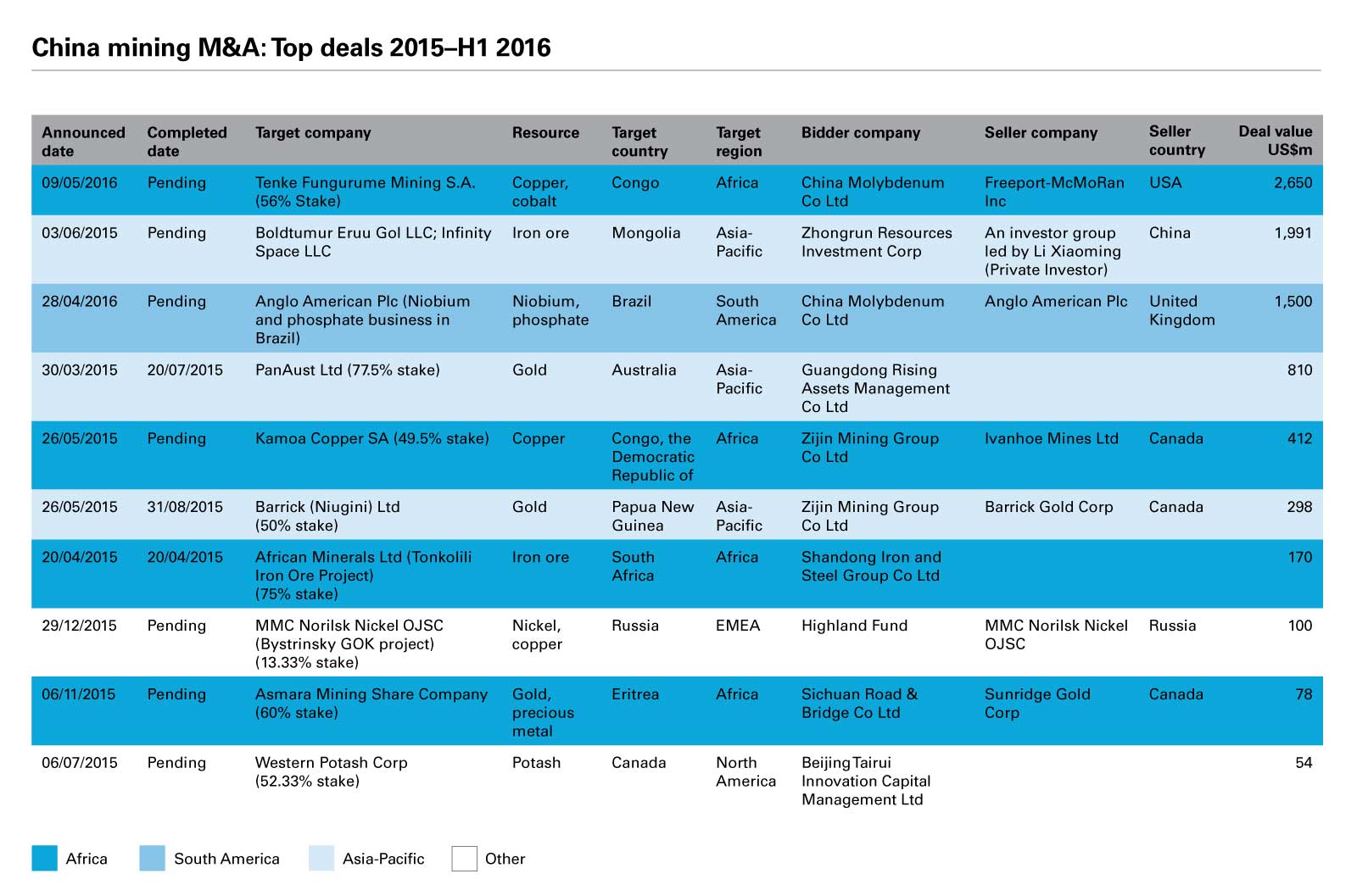