One notable development in 2019 was that investors were homing in on credit quality in the absence of protections in documents, which has produced a bifurcated market at the start of 2020

In the year ahead, European leveraged finance investors that have been dealing with rising term sheet erosion will have few other options in their pursuit of yield. But while they may be prepared to cope with fewer protections, many are also likely to scrutinise credit quality much more aggressively to mitigate risk in the months ahead.

The fact remains that the leveraged finance market, even with competitive pricing levels for borrowers, still offers investors levels of return that are difficult to come by in other asset classes. However, that must be balanced against potential rising default rates predicted by some (but not all) sources. These tensions will drive investor portfolios.

We expect larger deals will continue to be oversubscribed, as cashflow performance by borrowers in jumbo deals entices investors despite such competition driving down the yield offered by the transaction, while smaller deals offering higher risk will both price wider and face increased scrutiny, with lenders more likely to be able to dictate, or at least influence, terms.

Each of these trends to some extent mirrors the impact of the private credit market on the wider leveraged finance market.

On the one hand, private credit's march into the jumbo deal space means that traditional investors need to cede certain terms and offer competitive pricing to ensure keeping the deal in the syndicated markets.

On the other hand, in smaller deals, a borrower is more likely to take on board market feedback when the alternative offered by the private credit market may well be less flexible for their business. We see this divergence of approach between deals as likely to continue into 2020.

Such has been the growth of Europe's leveraged finance market following the financial crisis that it is now more influential and established than ever before.

Throughout 2019, the market weathered a series of significant threats, from global trade wars to Brexit uncertainty and ongoing macroeconomic volatility, and came out the other side relatively unscathed, which hints at a solid year ahead. 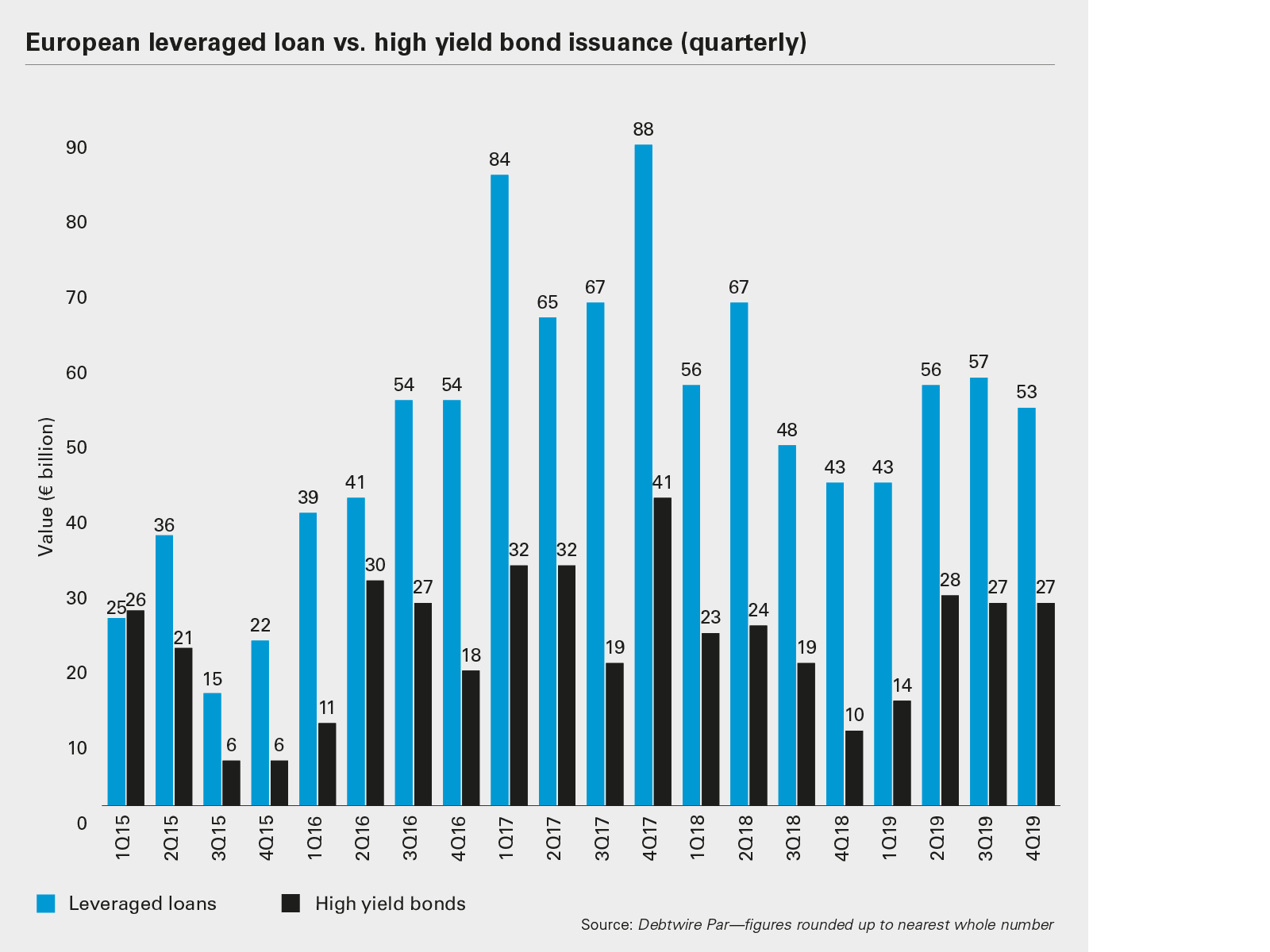 M&A up, interest rates down

The growth in western European M&A activity since the financial crisis (deal value more than doubled between 2009 and 2018, according to Mergermarket data) has been a clear driver of issuance. This is likely to continue, as corporates and private equity firms tap into the loan and bond markets with ever-increasing frequency.

From an investor point of view, a prolonged period of low interest rates—the Bank of England's base rate sits at 0.75 per cent1 while the European Central Bank has held rates around 0 per cent2— will continue to drive lenders to leveraged loans and high yield bonds as they search for yields that traditional fixed-income and bond instruments are not able to deliver.

The rise in M&A activity and investor appetite for yield has created a perfect storm for leveraged finance issuance and an ideal environment for borrowers to secure financing in 2020. New money issuance for 2019, for example, represented 54 per cent of issuance, whereas its share of the market in 2014 was only 44 per cent. This is indicative of the upward trend in new borrowers turning to leveraged finance for their funding needs.

This year is expected to offer the same dynamics as 2019, with room for growth. In the UK, for example, concerns over Brexit stifled volumes somewhat in the first quarter of 2019, but market performance was strong from the second half of 2019 onwards. Those that had waited for Brexit worries to pass were given the chance to catch up, and new money issuances, along with opportunistic refinancing deals, came to market to take advantage of the stronger market backdrop on offer.

With a strong pipeline in place at the start of 2020 and a potential 'Boris Bounce' in the first half of the year following the UK general election at the end of 2019, 2020 should be a growth year—barring significant market events—though with ever-increasing scrutiny on credit quality, in particular if default rates do increase. 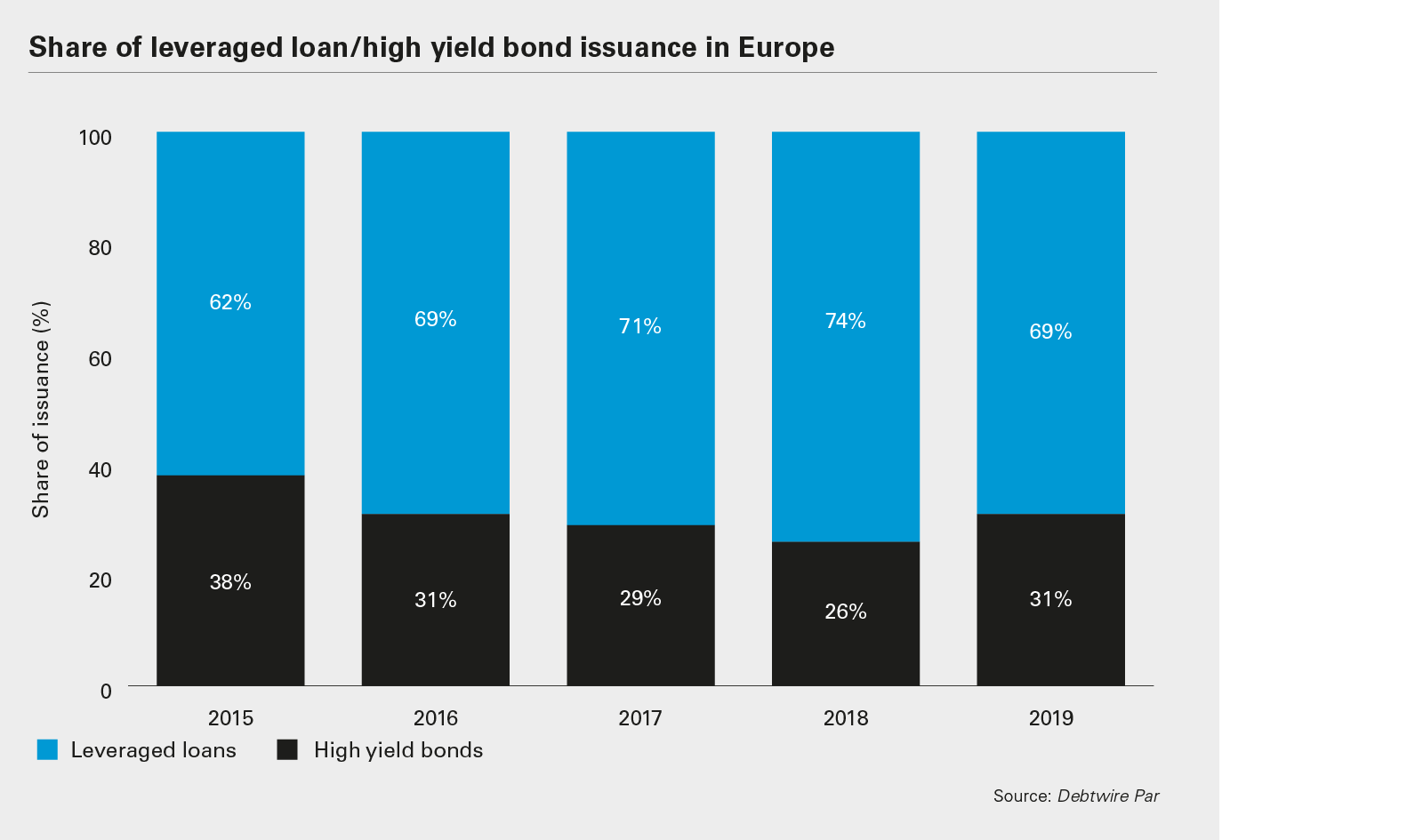 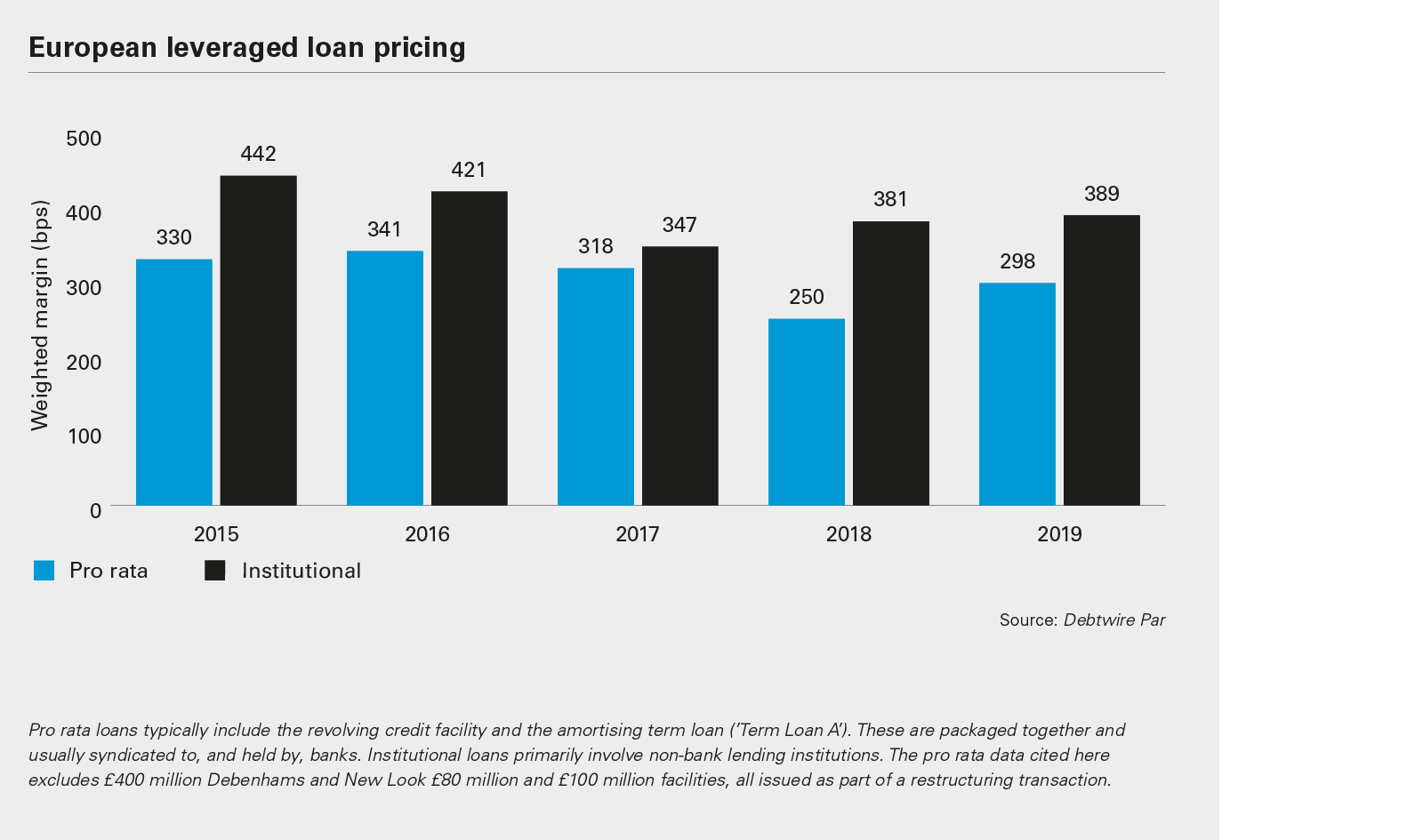 A good time to borrow

Given the demand for yield among lenders, loan covenants have been chipped away as the market has moved strongly in favour of the borrower. Data from Debtwire Par shows that the cov-lite share of the region's institutional loan issuance in 2019 reached 92 per cent, a significant shift in just a few years— cov-lite's share of European issuance was just 27 per cent in H1 2016 and 52 per cent in H2 2016.

There is a growing consensus that, even if the cycle turns and the market moves back in favour of lenders, cov-lite is here to stay. This is partly due to the competition between high yield bonds (which are cov-lite by nature) and loans, and the fact that investor demand for particular covenants has fallen away— the market has not lost participants in particular transactions purely for technical reasons.

Pricing has moved in a similar direction. By the end of 2019, pro rata leveraged loans—which include the revolving credit facility and the amortising term loan, and are packaged together and usually syndicated to, and held by, banks— were pricing at 298 bps versus 318 bps in 2014.

Downward flexes, which push margins down if demand is strong, meanwhile, continue to outnumber upward flexes in institutional loans, which are term loans structured specifically for institutional investors.

For high yield bonds, new-issue bond pricing across senior secured and senior unsecured tranches eased from 5.4 per cent in 2018 to 4.5 per cent in 2019.

Risks that may preoccupy lenders in the months ahead will be the ongoing pushback of protections in loan documents, with EBITDA add-backs and 'grower' baskets now standard rather than exceptional. LIBOR floors, meanwhile, which dictate a minimum interest rate that borrowers must pay if rates fall, were set at 0 per cent in Europe for 96 per cent of loans in 2019, versus approximately 10 per cent of loans with a 0 per cent floor in 2014.

Even though default rates are at historic lows and not expected to move much above the 1 per cent to 2 per cent range, the expansion of the leveraged finance space and the dilution of lender protections has caught the attention of regulators. The International Monetary Fund's (IMF) recent Global Stability Report warned that 'covenant protections have weakened' and that up to US$19 trillion of corporate debt, representing close to 40 per cent of company borrowings in major economies, could be at risk of default in a downswing.3 The Bank of England, Central Bank of Ireland and EU watchdogs have also raised concerns about the scale of the leveraged loan market.4

With default rates expected to remain low, investors' best protection European leveraged finance: A bifurcated balancing act 7 against defaults may well be to continue to diversify their portfolios across industries, jurisdictions and capital instruments, to cushion any particular credit issues in one of their investments. In the current cov-lite markets, unexpected liquidity issues or very specific credit issues can cause a default and/or restructuring. Given the wider macroeconomic conditions, we expect these to remain the principal drivers for stressed credits and for default rates to remain low, even if they begin to increase somewhat in the year ahead.

It's also worth noting that, in the modern cov-lite era and across a number of credits in 2019, many sponsors and corporates have reached out to creditors when facing a potential default and, more often than not, a mutually acceptable solution has been achieved. 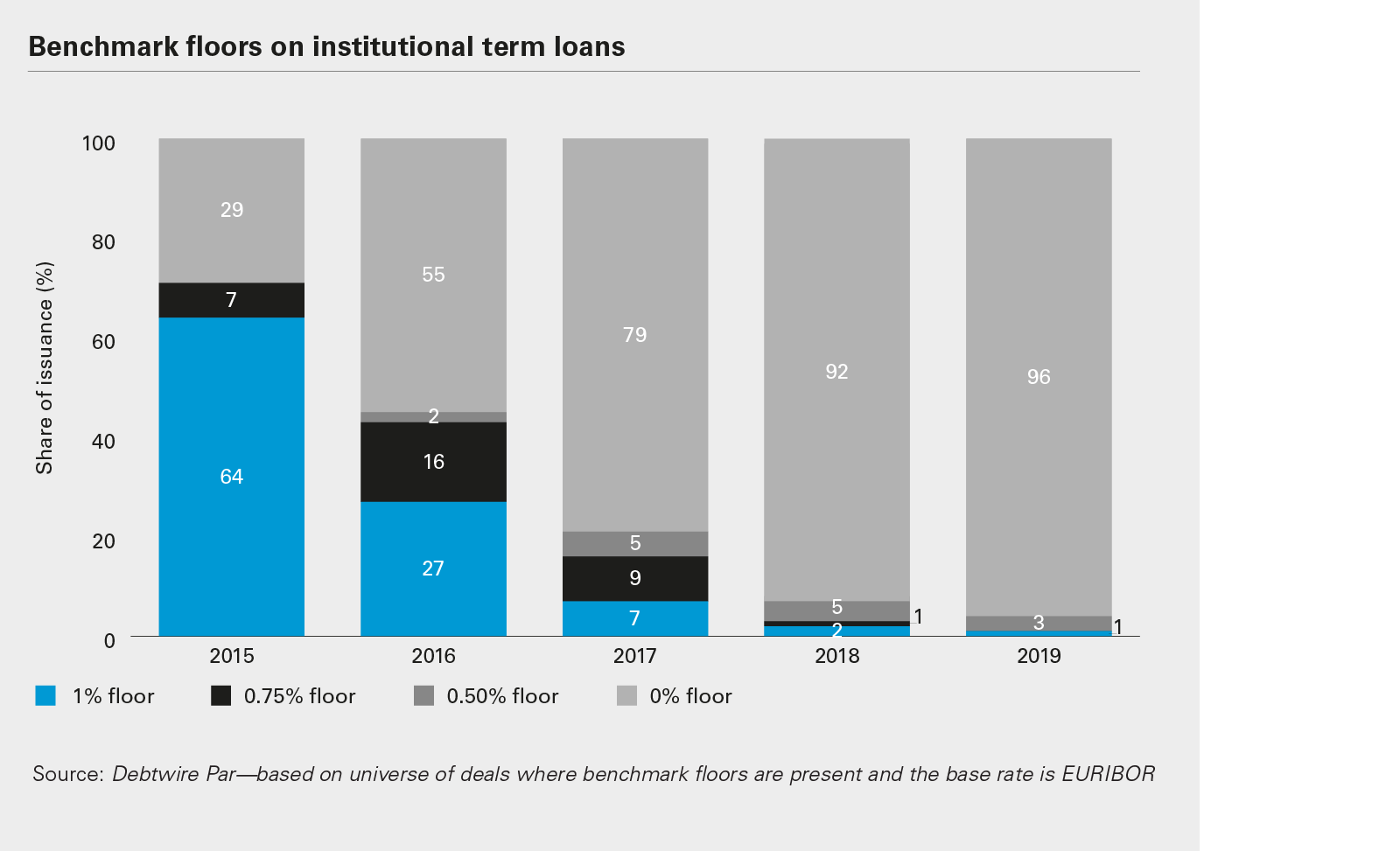 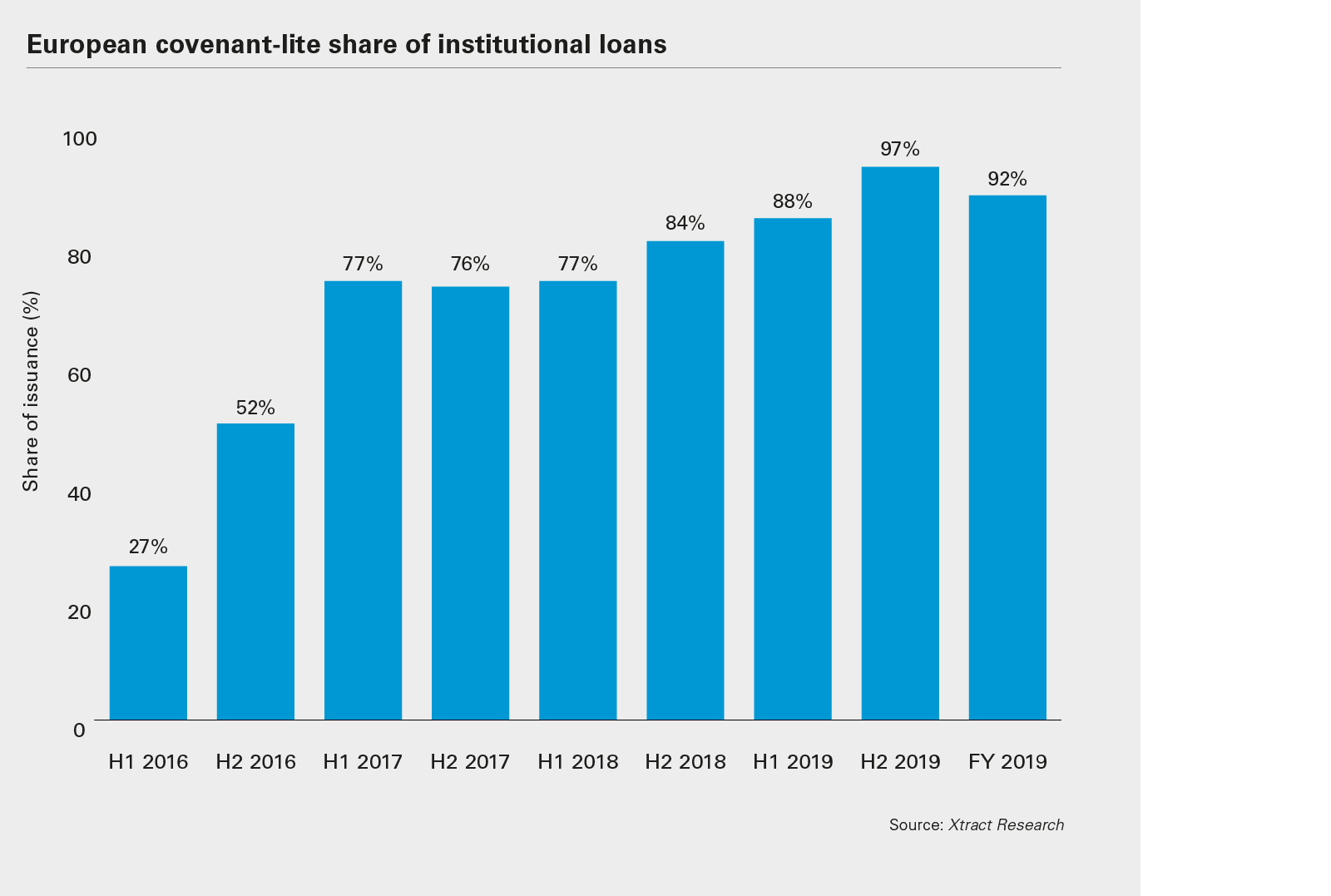 Despite concerns that the credit cycle is peaking and that credit protection in documents has deteriorated, there is optimism that 2020 will be another solid year for leveraged loans and high yield bonds

One notable development in 2019 was that investors were homing in on credit quality in the absence of protections in documents, which has produced a bifurcated market at the start of 2020. Pristine credits will sail through in the months ahead, pushing successfully for looser terms and better pricing, but as soon as there are any wrinkles, lenders will step back or insist on tighter controls and higher pricing.

Lower leverage levels will continue to offer lenders a degree of comfort in the ongoing absence of covenants. Debt/EBITDA multiples averaged out to 5.4 times and, in 2019, 40 per cent of deals were levered at between 5 times and 6 times, with 36 per cent at multiples of 5 times or less.

That said, as noted above, EBITDA add-backs and the definition of EBITDA appearing in documentation for both leveraged loans and high yield bonds continue to take an increasingly aggressive stance.

The growth of direct lenders adds even greater nuance to these dynamics. Fundraising for European direct lending is estimated to have grown from less than €15 billion in 2014 to more than €20 billion in 2018. With larger war chests at their disposal, direct lenders have expanded their reach beyond their mid-market base and represent an alternative to credits that would otherwise have always gone into traditional bank syndication or a high yield bond issue.

As direct lenders are typically take-and-hold investors, they may still demand covenants and higher pricing, but offer faster execution and remove the risk of flex for borrowers. These direct lending players will continue to offer a new source of capital in 2020 and provide borrowers taking on leveraged finance with options they might not have considered. 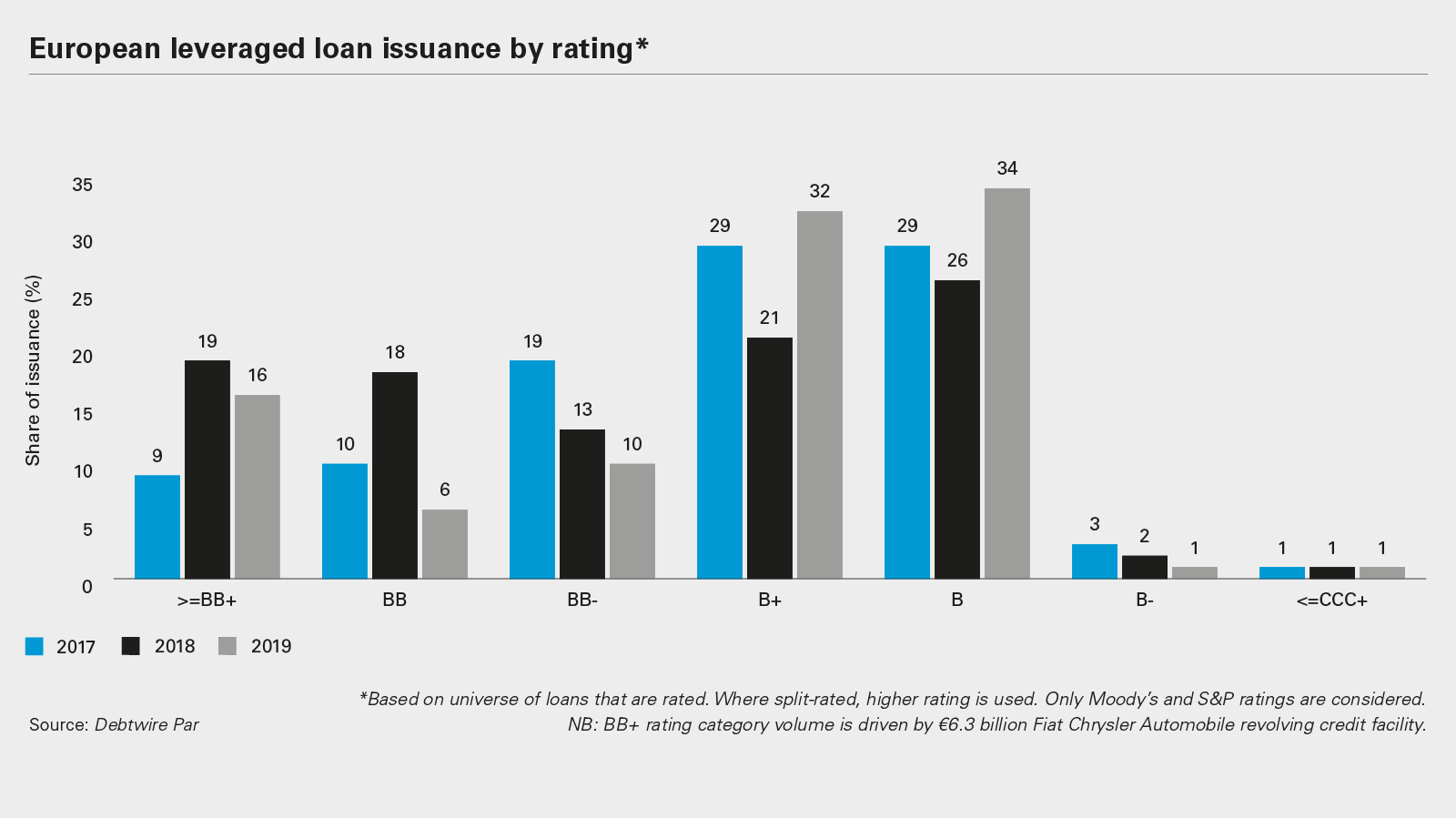 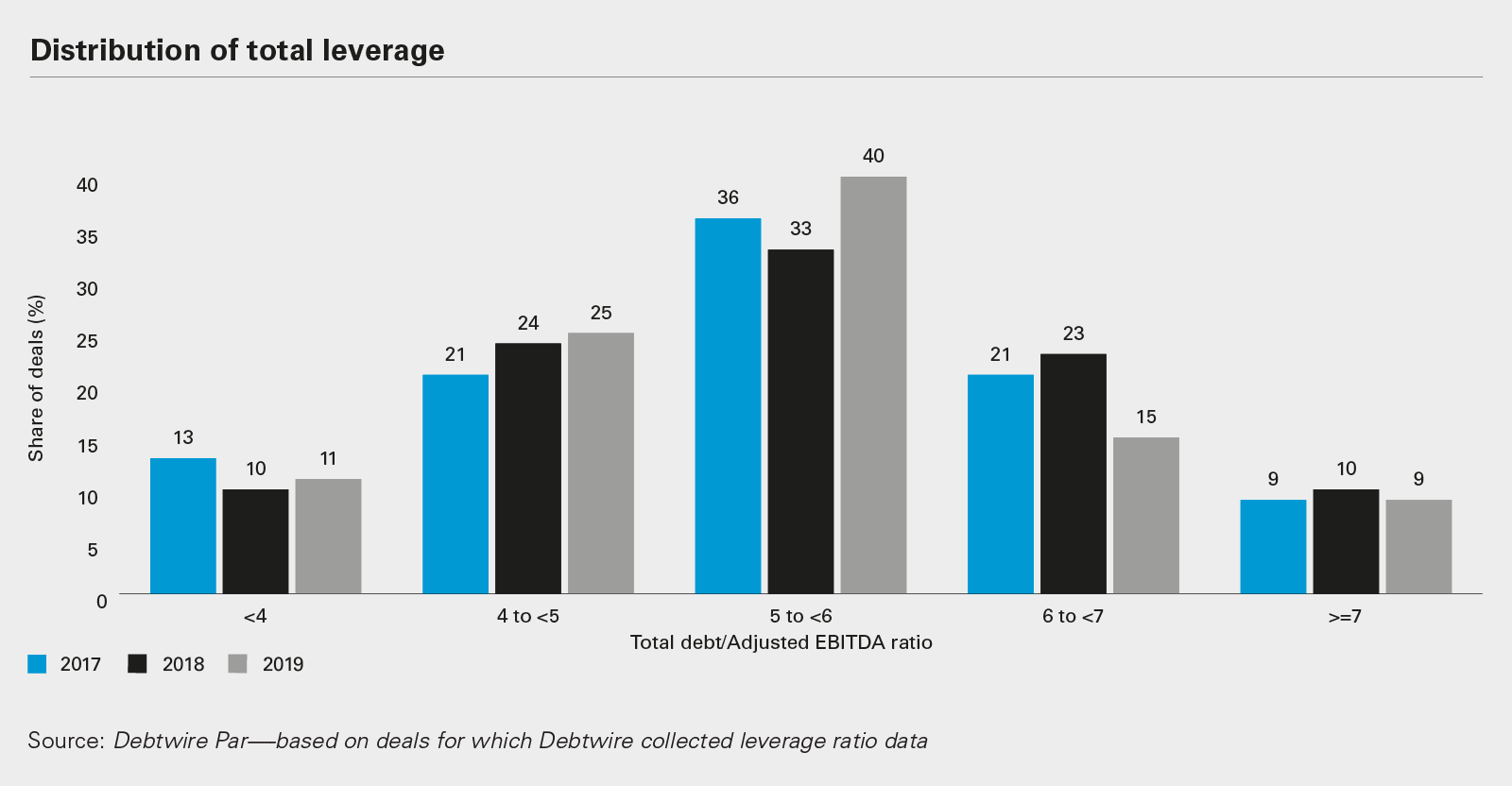 Despite concerns that the credit cycle is peaking and that credit protection in documents has deteriorated, there is optimism that 2020 will be another solid year for leveraged loans and high yield bonds. Based on Debtwire Par coverage, there was an estimated €36 billion in the pipeline at the start of 2020 — nearly 70 per cent higher than 2019, year-on-year.

With few loans carrying covenants, there are limited triggers for restructurings, which will protect against an increase in defaults, and M&A activity could climb if there is greater clarity around Brexit and global trade tensions subside.

In 2020, the year began with more optimism than 2019, with a path to Brexit identified and market sentiment high following a strong end to 2019, and we predict this to continue. The market is sufficiently robust to take on bumps in the road, but market participants must be cautious and identify where a bump is, in fact, a roadblock.

This caution, combined with a focus on credit quality and the bifurcation of the market into quality deals that are oversubscribed and lower credit deals that are appropriately negotiated, could, in fact, be a strong platform for a growing market. Market participants may concentrate on one or other of these market segments, thus providing localised liquidity, where attention to detail can be key.

As long as base rates remain low—which seems likely, given the European Central Bank's decision to cut its bank deposit rate to an alltime low of –0.5 per cent and restart its quantitative easing programme in September 2019—lenders will continue chasing yield, which means Europe's leveraged finance growth has a way to run yet.