After seven years in the doldrums, moves are afoot to revitalise the European securitisation market. This is urgently needed to broaden the funding basis of European SMEs.

Removing the stigma of securitisation is central to the revival of the market.

How likely is a successful revival of the market under qualifying securitisation— simple, transparent and standardized (STS)—going to be? That all depends on the results of the "trilogue" discussions between the European Commission, Council and Parliament, to be held on the legislation for the new securitisation framework. Crucial discussions will be around the level of due diligence that investors are able and willing to conduct, the possibility of third parties certifying that STS criteria are being complied with, and risk weights and capital charges for STS securitisation positions being set at a reasonable level (see Figs. 1a and 1b). 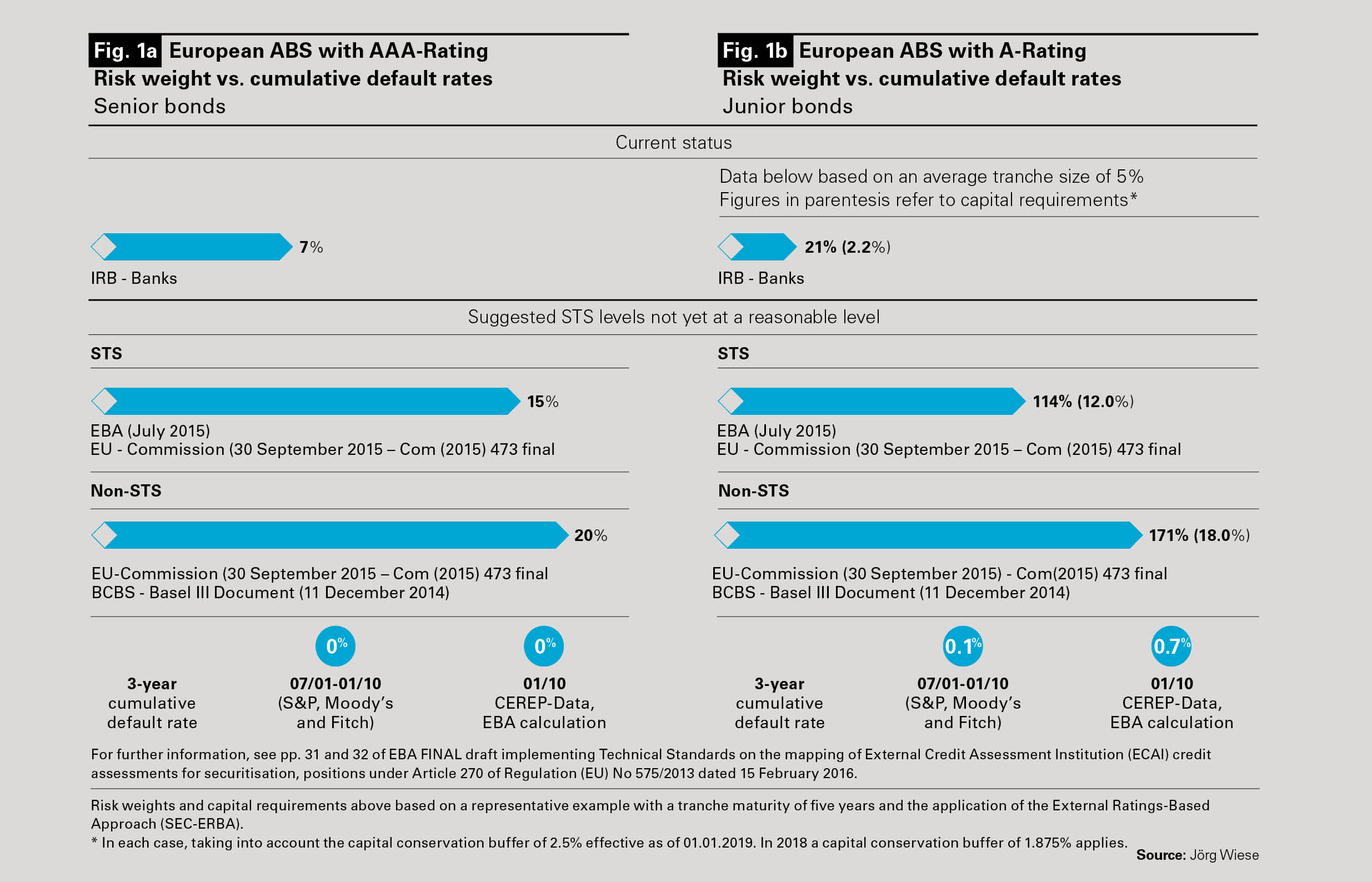 Although the dust may have settled on the financial crisis of 2008, the finger of blame remains squarely pointed at securitisation. In the aftermath of the demise of Lehman Brothers, one of the disgraced bank's former senior executives admitted that Lehman was addicted to securitisation like "financial heroin".

While Lehman—and numerous other banks still trading today—were criticised for issuing residential and commercial loans to borrowers with supposedly unworthy credit profiles, the performance of these assets in Europe tells a very different story (Fig.2). In fact, the European securitization market suffered negligible losses between 2000 and 2013. 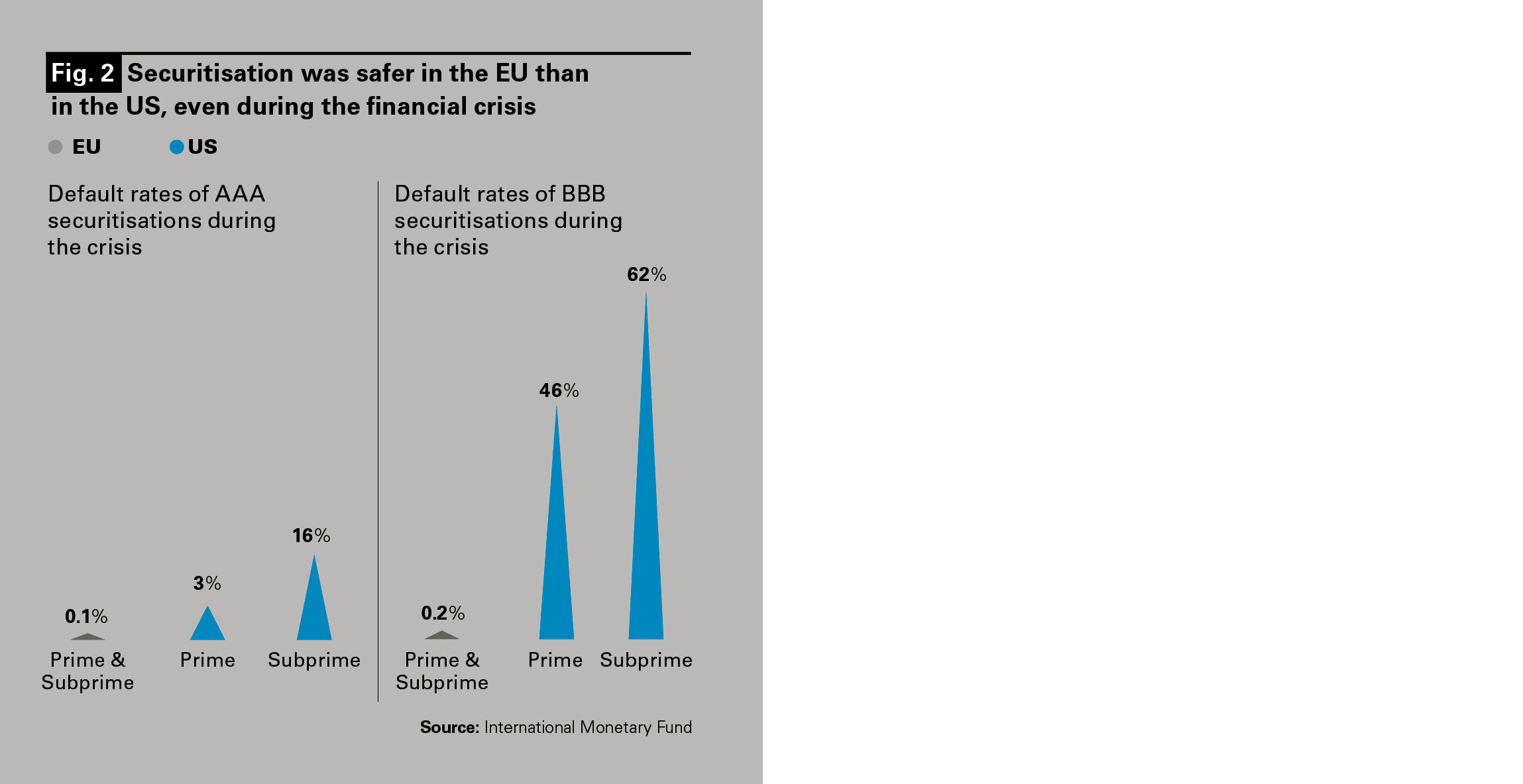 The scale of regulatory reform, meanwhile, has been significant. This has been driven partly by the desire of politicians and lobby groups to strengthen the regulatory framework, but also by the need, as many see it, to encourage the revival of a market that has all but disappeared in Europe since the crisis (Fig. 3). 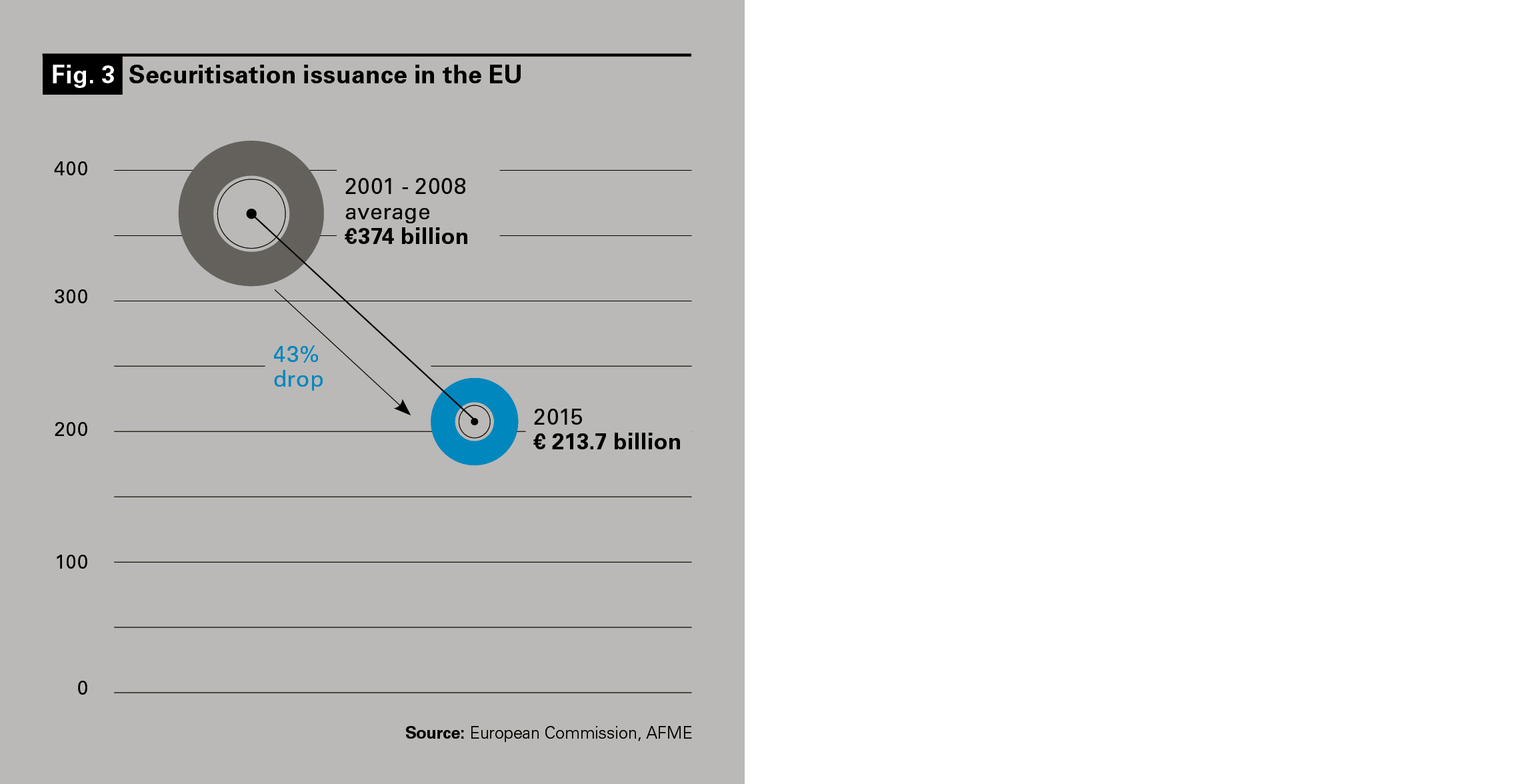 Data from the Association for Financial Markets in Europe (AFME) show that securitisation issuance remains well below the average for 2001 – 2008. In 2015, European issuance stood at €213.7 billion, compared with an average of €374 billion for the eight years leading up to the financial crisis. Despite the overall decline, the totals for the last two years have bounced back marginally from the €180.8 billion in issuances in 2013—the lowest since 2002.

The creation of a market for high-quality securitisation is one of the key objectives of the European Commission's initiative to build a Capital Markets Union.

The cornerstone of regulators' plans to restore confidence in the securitisation market has been a focus on a "brand mark", which will signal that a bundle of assets has complied with predetermined eligibility criteria, thereby satisfying regulatory requirements.

As a response to the Commission's January 2014 call for advice on long-term financing, in July 2015 the European Banking Authority (EBA) laid out its criteria for what should constitute a qualifying securitisation. Specifically, the EBA outlined that issuances should be simple, standard and transparent (Fig. 4). 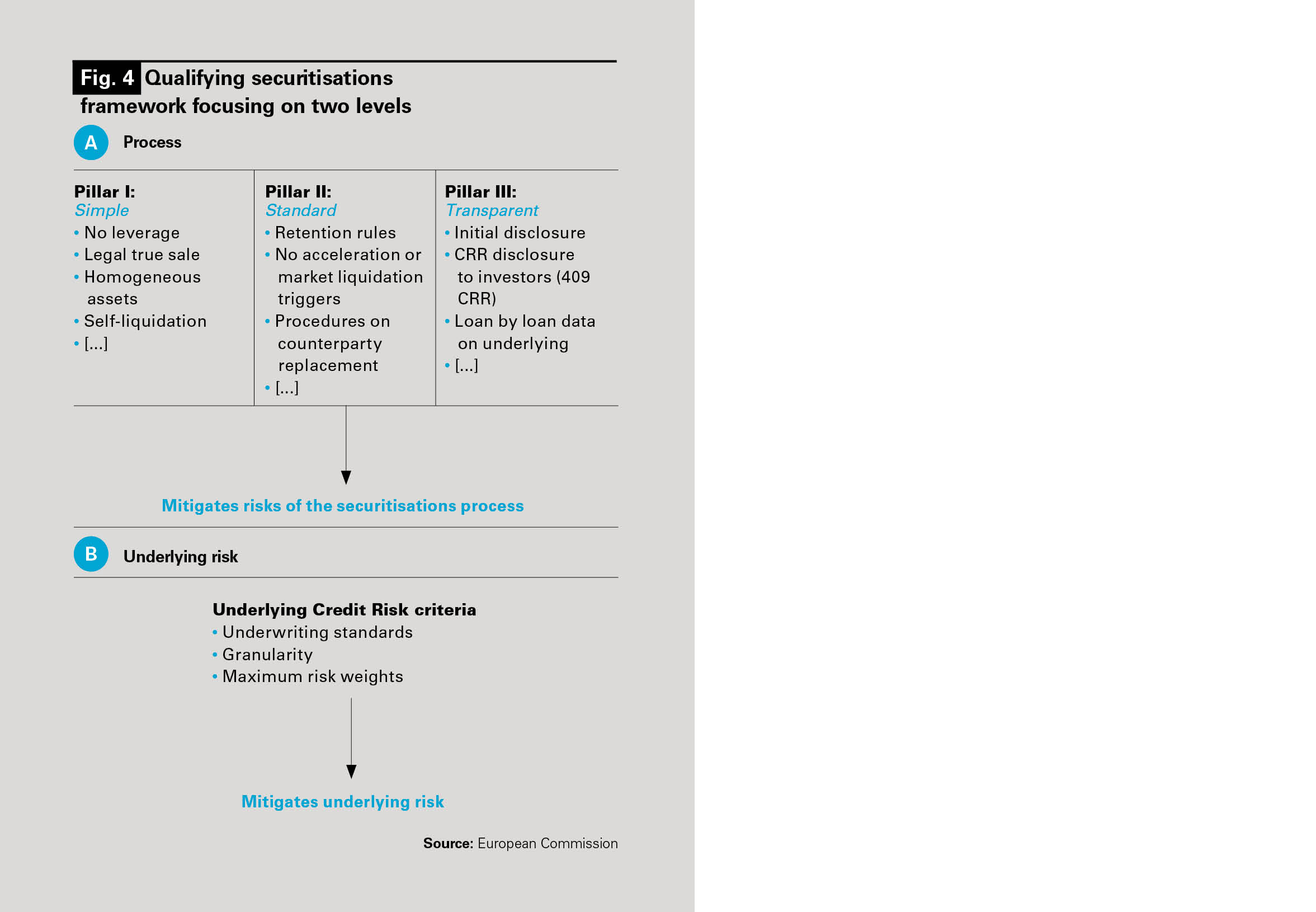 Meanwhile, consultation papers from other supervisory bodies have used different variations of this description. Although the terms are not consistent, the criteria are broadly comparable.

The EBA report was followed on 30 September 2015 by the European Commission's proposal for a regulation laying down common rules on securitisation and creating a European framework for STS securitisation.

The most recent proposals came in November 2015, when the Council presented to Parliament its suggested regulation on the topic, together with a proposed amendment to the Capital Requirements Regulation (CRR). The Committee on Economic and Monetary Affairs (ECON) will consider recommendations over the summer, with tripartite discussions taking place at the same time. It is expected that the ECON will issue its vote in November 2016 with a plenary session of the European Parliament on this topic to be held before the end of the year. The new securitisation framework is, therefore, not likely to come into effect before mid-2017 or even 2018.

A successful revitalisation of the securitisation market under STS will depend—among other things—on the level of due diligence that investors are expected to undertake and are able to conduct. Compliance with the relevant STS criteria cannot replace the due diligence process, nor is it intended to do so. However, the ability to undertake detailed due diligence depends on the availability of relevant data. Particularly for SMEs, this will often not be the case. Many potential investors may, therefore, be either unable or unwilling to undertake the due diligence required. Some STS criteria are somewhat ambiguous and need further clarification. With more than 70 supervisory authorities in Europe dealing with a large variety of market participants, multiple interpretations by such authorities and investors are inevitable. Therefore, it will probably not be until the European Securities and Markets Authority (ESMA) and EBA have issued their guidelines, providing guidance on how to interpret the criteria, that market participants will see some clarity in that regard.

Although the issuer and the originator or sponsor are obliged to notify ESMA about the criteria being satisfied, ESMA will not be required to check the accuracy of this information. For investors to be confident that STS criteria are being complied with, therefore, the importance of certification by an independent third party—as proposed by the European Council— should not be underestimated.

Despite zero per cent default rates for AAA and AA-rated European asset-backed securities, the risk weights—and, therefore, capital requirements—are intended to be increased significantly. A minimum risk weight of 15 (or, in exceptional cases, 10) per cent for senior STS securitisation positions are also being suggested, along with a new method for determining capital charges in the proposed amendment to the CRR. Although this is a much lower level than currently proposed by the Basel Committee for the securitisation framework to come into effect in 2018, it is still significantly higher than the currently applicable minimum risk weight of 7 per cent for AAA-rated regular securitisation positions held by IRB institutions being the most significant investors from the banking sector.

If STS securitisations are intended to be a cornerstone of the Capital Markets Union project—and a means of improving SMEs' access to the capital markets—a number of criteria for asset-backed securities and asset-backed commercial paper (ABCP) transactions and programmes first need to be revised and clarified. Moreover, the market needs to adopt a more consistent regulatory treatment of banks and insurance companies (Fig. 5).

Capital charges for securitisation positions currently applicable to insurance companies, even with an STS label, are simply prohibitive and discriminating (Fig. 6).

The Solvency II Directive requires insurance companies to reflect the spread risk, which implies that price losses in situations of extreme market stress would need to be realised. However, due to their amortisation profile, such positions are normally held until maturity based on a buy-and-hold approach.

Finally, without reviving the ABCP market—the volume of which in Germany alone is about €12 billion—any attempt to support SME financing in Europe is surely doomed to fail.

Experts argue that there is still much work to be done if a revitalisation of the market is to be achieved.

Lynn Maxwell, global head of securitisation and managing director of structured capital markets at HSBC, says that while regulatory work has focused on differentiating between poorly and strongly performing assets, there are several obstacles still to overcome. "Challenges remain to ensure that the STS/STC [simple, transparent and comparable] definitions are not too narrow for practical application and to recognise the value of the STS/STC criteria in the bank and insurance prudential and liquidity regimes," she explains. Maxwell's views are shared by many in the market, with industry practitioners calling for any new standard to adequately take into account the specific financing needs of the "real" global economy.

Kudiß adds: "The restrictive eligibility criteria for STS securitisations could deprive SMEs of benefiting from ABS transactions. "The process of regulatory recognition of STS securitisation, the ongoing supervision of compliance with the criteria and the sanctioning process in the case of infringement provides incalculable uncertainties and risks." HSBC's Maxwell agrees, calling for more to be done to ensure that liquidity coverage ratio requirements are aligned for STS and covered bonds.

She adds: "I would also like to see the STS recognise that the sovereign cap in certain countries should not bar high-quality securitisations from those jurisdictions from eligibility. "It is important to ward against a too narrow definition of liquidity coverage ratios, especially as the performance of European assetbacked securities through the crisis does not justify a narrow approach."

Further justification is needed from regulators on the proposed capital requirements for investments in ABS and the outlined guidance on liquidity ratios. As ever, though, the devil will be in the detail. And in the meantime, the market is hoping for a wise decision out of Brussels and Strasburg, and sooner rather than later.

The author would like to thank Lynn Maxwell, Dr Reinhard Kudiß and Jörg Wiese for their contributions to this article.