Employers are scrambling to placate top earners with more attractive options for tax relief following the introduction of a tapered annual allowance.

The speculated sweeping pensions tax relief measures in the 2016 budget failed to materialise, much to the relief of nervous benefits managers across the United Kingdom. Although this major overhaul has been averted (or, perhaps, only forestalled), a significant change, the introduction of a tapered annual allowance and the reduction of the lifetime allowance, came into effect on 6 April 2016, making traditional pensions less appealing to high earners, such as senior executives.

Coupled with other major changes in recent years, which leading pensions authority, Lord Holmes of Richmond, describes as "a negative downward spiral for pensions as a proposition", these changes may send employers scrambling to placate their top earners with more attractive options for tax relief and for building a retirement nest egg.

The base annual allowance is still £40,000 per tax year. An individual can also carry forward any unused annual allowance from up to three previous tax years. Contributions exceeding the allowance are taxed as income.

For such individuals, the annual allowance is reduced by £1 for every £2, up to a maximum reduction of £30,000.The annual allowance for an individual with adjusted income exceeding £210,000 thus falls to a mere £10,000 a year, dramatically undermining high earners' ability to build savings or to reduce their taxes.

What is adjusted income and threshold income?

Adjusted income is all taxable income for a tax year including employer and executive pension contributions.

Threshold income is all taxable income for a tax year excluding employer and executive pension contributions.

Since the reforms in the 2014 budget, individuals aged 55 or older or those who meet ill-health criteria have had the option of "flexible access" to their defined contribution pension benefits. In particular, individuals may designate a flexi‑access drawdown fund or take an uncrystallised funds pension lump sum.

Those who do so are assigned a "money purchase annual allowance" of £10,000 in tax-relieved savings they can contribute to a pension, although they still get the remainder of their £40,000 annual allowance for accruals in their defined benefit plan, the "alternative annual allowance."

The lifetime allowance is down as well

The lifetime allowance—the total fund an individual can build up in a registered pension plan receiving favourable tax treatment—has been reduced from £1.25 million to £1 million as of 6 April 2016. Starting two years from then, the lifetime allowance will be uprated according to the change in the Consumer Price Index. 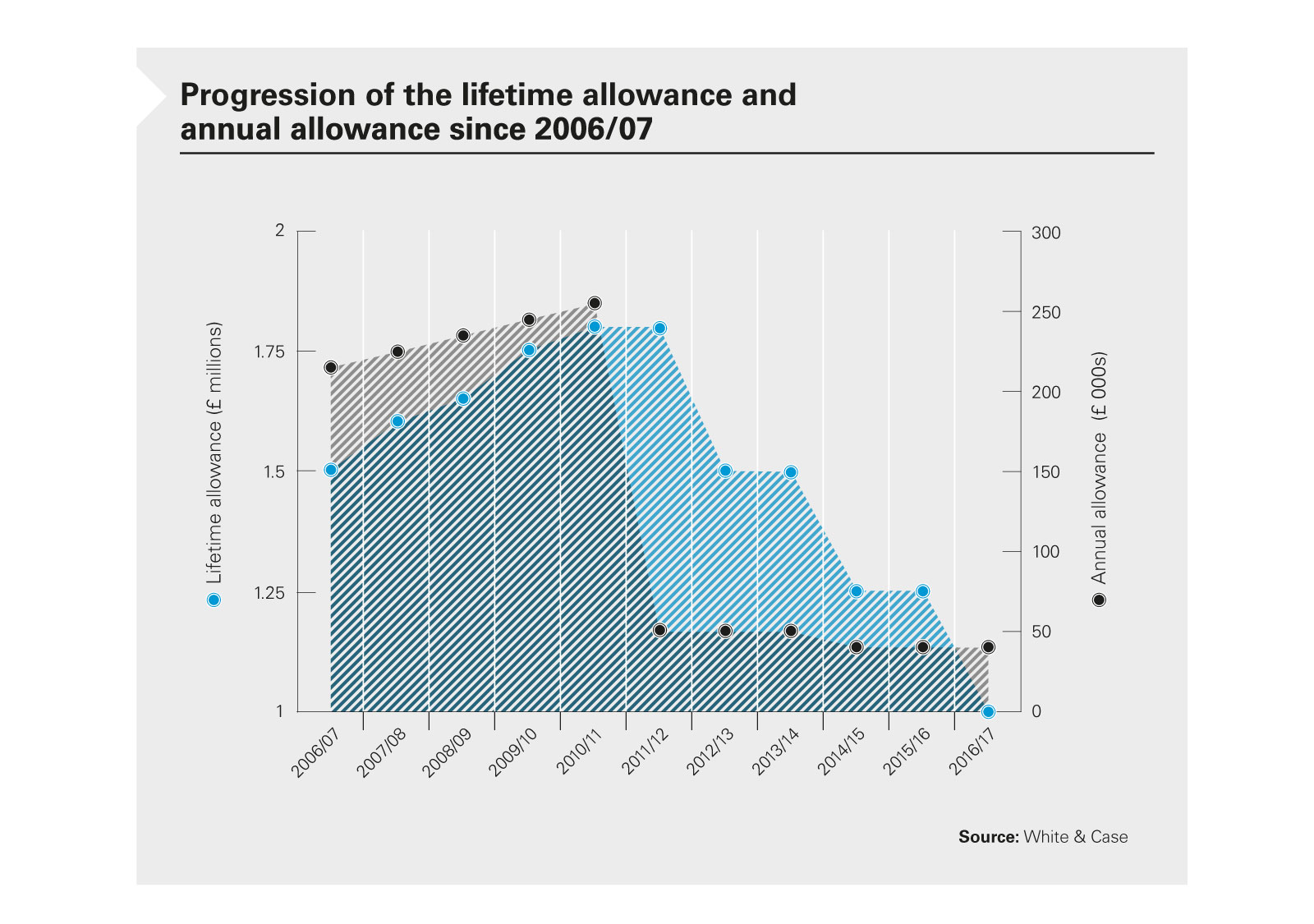 Individuals who exceed the lifetime allowance are subject to a 55 per cent charge on the excess if drawn as a lump sum, or 25 per cent of the excess if drawn as a pension. An individual can apply for Fixed Protection 2016 or Individual Protection 2016, subject to certain conditions, and, if this is granted, will not incur a lifetime allowance charge on any benefits up to £1.25 million.

More changes may be on the way

In the build-up to the March 2016 budget, the Chancellor was said to be strongly considering three options for sweeping reform.

Under the flat-rate option, higher‑rate and additional-rate taxpayers would be taxed twice: once on their contributions going into a pension plan, and again when they withdraw those funds as taxable income.

According to a Treasury source, these proposals were dropped in the end because 2016 was "not the right time" to make major changes to pension tax relief. However, although no changes were made in the 2016 budget, Lord Holmes says, in the future "more radical changes are likely".

Employers have options, and risks

These cumulative changes have not only further complicated the pensions landscape, but also eroded the long-term appeal of saving into a registered pension scheme for high earners. Employers looking to keep their senior executives are already exploring alternative replacement structures to fill the void.

The 2016 budget has further strengthened the cause of these alternative structures, by extending the ISA limit to £20,000 per annum from 6 April 2017 and reducing the higher rate of capital gains tax to 20 per cent, which makes share‑based alternatives a more attractive proposition. Viable alternative structures include: a company‑sponsored ISA; unregistered pension plans; employee benefit trusts; CSOP options; EMI options and restricted shares. A lifetime ISA will also be introduced from 6 April 2017 for those individuals under 40. The maximum amount that an individual can save into the ISA per year is £4,000, and the government will top up the amount an individual puts in by 25 per cent. It is unlikely that such an option will be viable for the majority of senior executives due to the majority being over the age of 40.

Employers should evaluate options cautiously. Anti-avoidance provisions have been introduced to combat arrangements whose main purpose would appear to be reducing the amount of the annual allowance taper. And packages whose "sole or main purpose," as determined by the Pensions Regulator (TPR), is to induce workers to opt out of an auto-enrolment scheme can invoke compliance notices, penalties of up to £50,000 and escalating penalty notices with a daily rate of up to £10,000 from TPR. 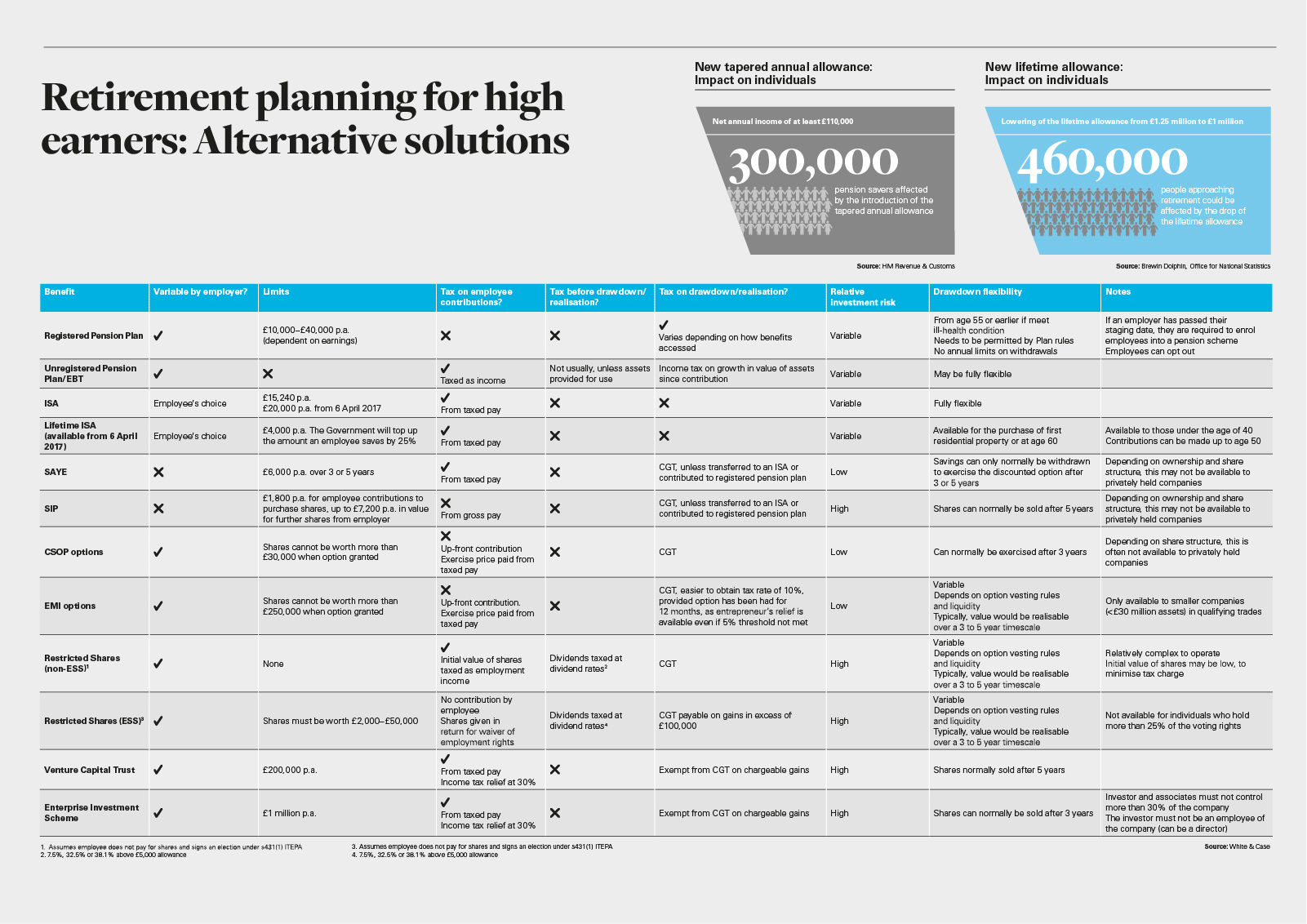 Nicholas Greenacre outlines the headline changes in relation to employment and pensions taxation.