The Glencore giant, the law's Lilliputians, and the mining and metals markets

Balancing local and global competition issues will be key to a successful Glencore–Rio Tinto merger. James Killick, John Tivey, Rebecca Campbell, Jan Jeram and Anthony Elghossain of global law firm White & Case examine the process and the issues that may arise should such a deal come to fruition.

The market's been buzzing. Ever since Glencore's rejected takeover bid of Rio Tinto back in October, mining and metals market participants have been watching and waiting for Glencore to revisit its bid next April, when a six‑month freeze required by UK takeover law comes to a close.

The potential merger would create the world's largest and most diversified mining group: with a market cap of US$160bn, the would-be colossus would tower above even BHP Billiton. But the potential giant's strength could hinder the attempt to cobble it together in the first place. 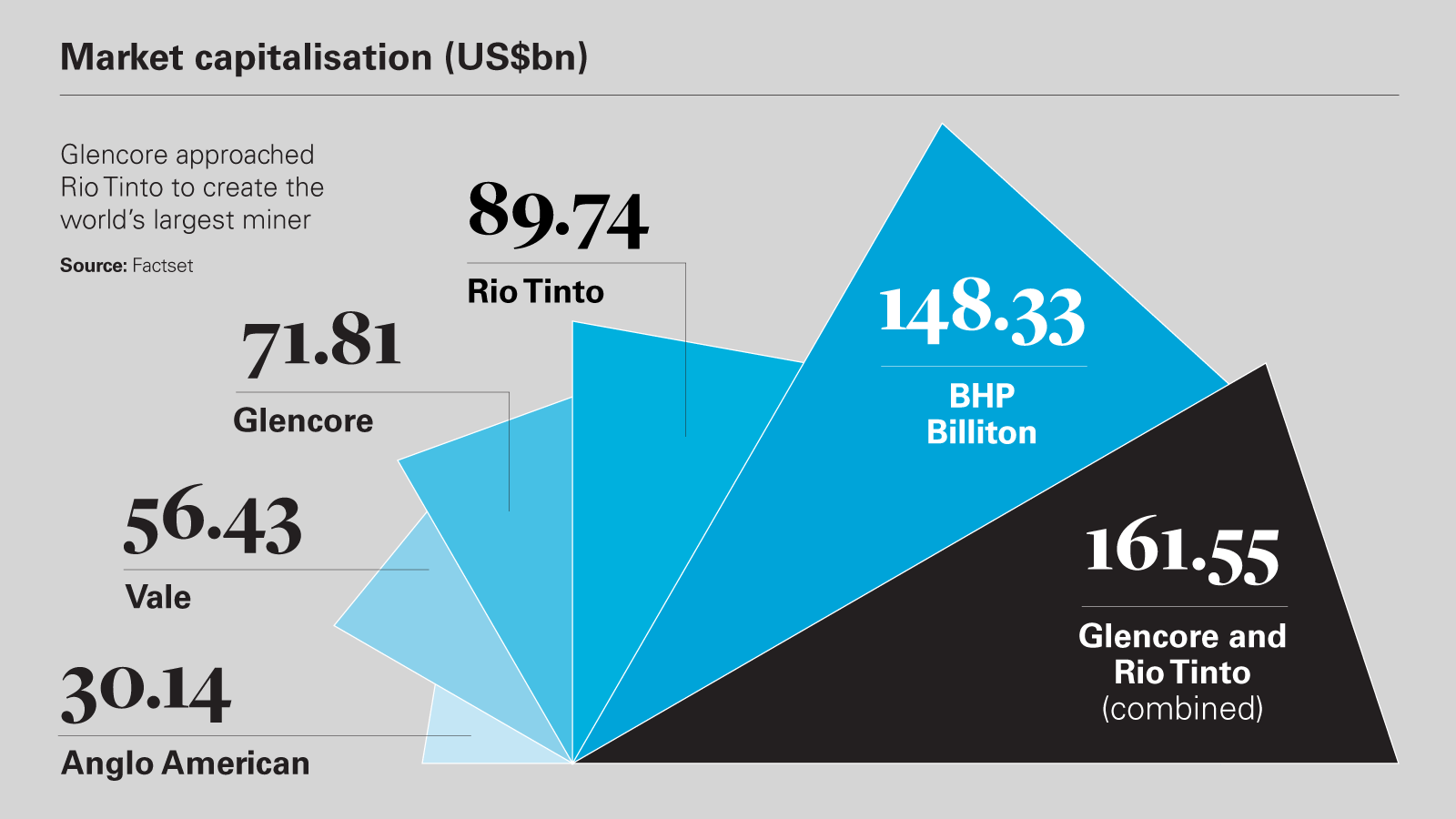 No move is possible without a nod from merger control authorities, each with its own unique set of economic and legal theories and policy concerns. Moreover, with the deal's magnitude and over 130 merger control regimes at play globally, this will be a highly scrutinised and drawn out process.

Typically the considerations depend on a number of factors: the size, scope, and significance of the merging parties' presence in a specific jurisdiction; competition in the relevant industry; the presence and prominence of the merging parties' relevant customers; the past practice and policy preferences; and the importance of the industry itself. History, geography, and politics play their part too. Against that backdrop, different authorities are likely to view a merger in a variety of ways.

With the deal’s magnitude and over 130 merger control regimes at play globally, this will be highly scrutinised and drawn out.

If a country depends heavily on coal to produce a large percentage of its electricity, for instance, then its regulatory authorities will probably scrutinise a merger between two coal producers carefully — particularly if, say, the largest electricity producer is state‑owned and hostile to the merger.

Meanwhile, another country's competition authorities may practically rubber-stamp the same merger if that country has no such dependency on coal and the authorities solely look at the local market. Merger control can be both local and global at the same time. To add further complexity, some competition authorities will focus almost exclusively on the local market, looking at the impact on domestic customers, while others may move beyond this and investigate the global consequences of a proposed transaction.

Merger control for such multinational deals can get rather complex — a form of three‑dimensional chess! A potential Glencore Rio tie-up is precisely the sort of deal where one would expect certain authorities to look locally, while others look globally — even if the deal would produce relatively little domestic impact. Some authorities are likely to look at the global implications if the relevant market is considered to be global, as is the case with some of the markets in which Glencore and Rio operate.

There would certainly be vertical overlaps to consider if Glencore and Rio Tinto merged, not least given Glencore's significant trading activities. While some authorities would view vertical overlaps to be of a lesser importance than horizontal overlaps (i.e. when both companies are present in the same market), others may consider them more seriously — as potential threats to a healthy competitive environment — and thus investigate them closely.

Post-merger, Glencore and Rio would create by far the largest world player with a 22 per cent market share, around twice the size of its nearest rival. While the market shares alone are not high enough to cause competition worries in many countries (e.g. in the EU concern typically arises when the combined market share approaches 40 per cent) and taking account of the fact that 37 per cent of the global copper market is represented by small players, nevertheless the merged entity would clearly sit at the top of a highly fragmented market. We expect that there will be issues raised by some (if not all) antitrust authorities on the impact of the merger on the global copper market.

Iron ore is the main attraction. Rio Tinto's iron ore assets would fill the gap in Glencore's commodity portfolio and also allow Glencore to snap up iron ore at rock bottom prices, which have recently slumped below US$70 per metric ton, for the first time since mid-2009. Rio Tinto is the world's second largest miner of iron ore (behind Vale), with almost 50 per cent of the company's revenue in H1 2014 attributable to the commodity and assets spread across Eastern Australia, India, and the Labrador province of Canada.

Glencore is also active in the iron ore market, with assets in West and Central Africa, but it is only a marginal player. There have been a number of new entrants to the iron ore market since its peak in 2007/08 and global iron ore prices have been decreasing steadily since then – in part driven by reduced demand from steelmakers outside China (Chinese steel production keeps growing at the expense of steelmakers elsewhere), as well as greater supply of iron ore globally. We do not expect there to be antitrust issues in respect of iron ore.

37%
of the global copper market is represented by small player

A tie-up would strengthen Glencore's market leading position, making it almost twice as large as the second-largest player. While some authorities could view this with concern, the fact remains that almost two-thirds of the global market is in the hands of small players. That figure suggests that, on a global basis, the structure of competition is open. That said, a competition authority which has particular concerns in respect of coal, could see this market as an issue deserving in-depth investigation. There is potential for concerns to be raised by authorities in jurisdictions with a particular interest in thermal coal.

Post-merger, Glencore and Rio would create the second-largest player, on equal footing with Teck. However, the largest miner, BHP Billiton, would still be twice as large as the merged Glencore-Rio entity. Moreover, more than half of this market would be in the hands of smaller players. This suggests that competition would not be materially affected by the merger. In addition, there is no shortage of supply of coking coal for the steel sector right now. We do not expect there to be issues raised by merger control authorities in respect of seaborne coking coal.

We do not expect that operations in other commodities such as uranium for Rio Tinto, and zinc for Glencore should cause issues in merger review procedures.

Glencore is the world's largest commodities trader and is active in the trading of, among others, iron ore, coal and aluminium. Rio Tinto has a significant presence in the mining of these commodities. Therefore, vertical overlaps between the two merging companies would arise with regard to such commodities. The general approach of antitrust authorities is to examine whether a vertical overlap would foreclose other competitors. The relevant legal test varies between authorities. Given Rio's high market shares in certain production and mining sectors and Glencore's dominance in the downstream trading markets, it is likely that a number of antitrust authorities will closely examine the vertical overlap and likely impose further conditions on the merger.

In the Glencore Xstrata merger back in 2013, MOFCOM — the Chinese competition authority — only cleared the deal (which led to Glencore having a 19 per cent market share in the copper market) after the merging parties agreed to divest Glencore's highly prized copper mine, Las Bambas, in Peru. In addition, the merged entity had to agree to continue to supply China with copper at the same rate as Glencore and Xstrata had done collectively in the preceding two years.

Antitrust authorities will certainly continue to scrutinise transactions with an impact on the global mining industry and local economies around the world. But reasonableness and pragmatism will triumph. Issues will be overcome via divestitures of select assets or shares in assets in certain commodities, particularly in copper and seaborne thermal coal, as they have been overcome before. 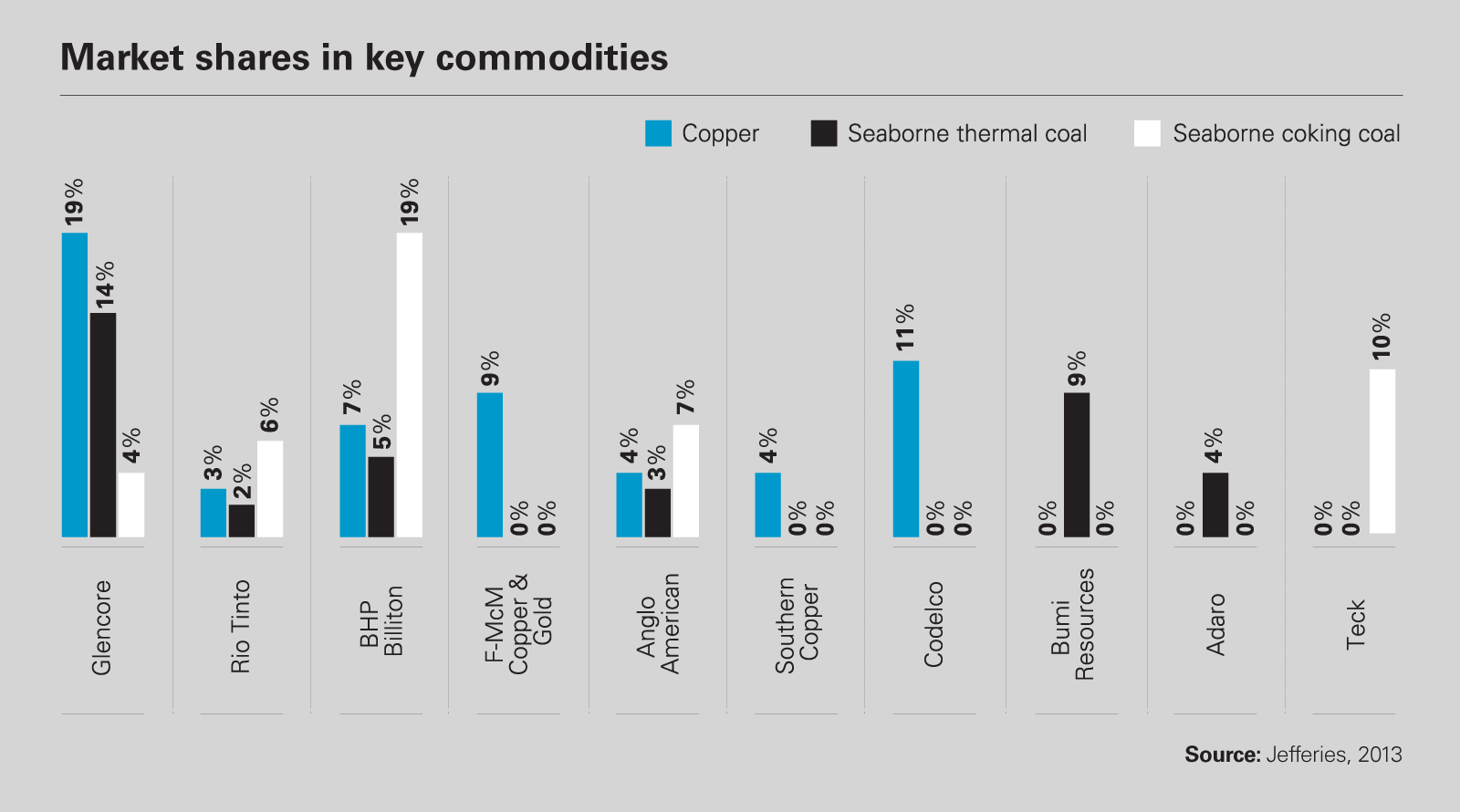