The globe-trotter's guide to merger control: How to avoid falling into traps

Having a sound knowledge of the intricacies of merger control regimes and thresholds is essential when guiding a complex crossborder M&A deal over regulatory hurdles to successful completion.

With global cross-border M&A activity running at its highest level since the peak of the previous deal boom in 2007, most big M&A transactions now have a significant cross-border dimension. That has wide-ranging regulatory implications as companies are obliged to file to merger authorities in multiple jurisdictions, including far-flung locations where either the bidder or the target may not even have operations or revenue streams. Multijurisdictional merger filings have proliferated in recent years in line with the growing number of merger regimes around the world. Today, more than 140 countries have adopted some version of a merger control regime, adding a layer of complexity to international M&A deals. Aside from the time and cost burden involved in gaining clearance in every country where the parties operate, companies must now be up to speed with the adoption of new merger filing regimes and their different timetables and nuances. In any transaction, companies must conduct an analysis of which jurisdictions they will need to file in, and gain an understanding of key differences in requirements between jurisdictions in order to file with the relevant merger authorities, and avoid disrupting the deal. Here are some of the key questions that need to be addressed in the process:

Although a large majority of jurisdictions require merger filings in the case of a merger or an acquisition of control, some jurisdictions have chosen to create additional "triggering events" that may cover situations in which an acquirer is not seeking control, such as in a joint venture or the purchase of a minority stake. Sometimes this only applies to certain industries.

Although there is some level of harmonisation among different countries, important discrepancies remain between merger filing regimes. Merger filing obligations may be triggered by different factors such as the size of the parties' turnover and assets, as well as market share. The market share thresholds are particularly tricky, since they require that the parties define the relevant market, a notoriously complex task. It may be intuitive to a business person to define the market in a certain way, but any legal practitioner knows that competition authorities sometimes work in mysterious ways. In the case of complex transactions, it may sometimes be advisable to initiate pre-notification contacts with the competition authority, bearing in mind that once started, it may be difficult to backtrack. While turnover and assets may be easier to measure, companies should bear in mind that different rules may be used in different jurisdictions. For example, while the EU Commission considers that only 50 percent of the turnover must be accounted for in a joint venture (JV) co-controlled with another company, in Germany 100 percent of the JV's turnover would have to be taken into account. 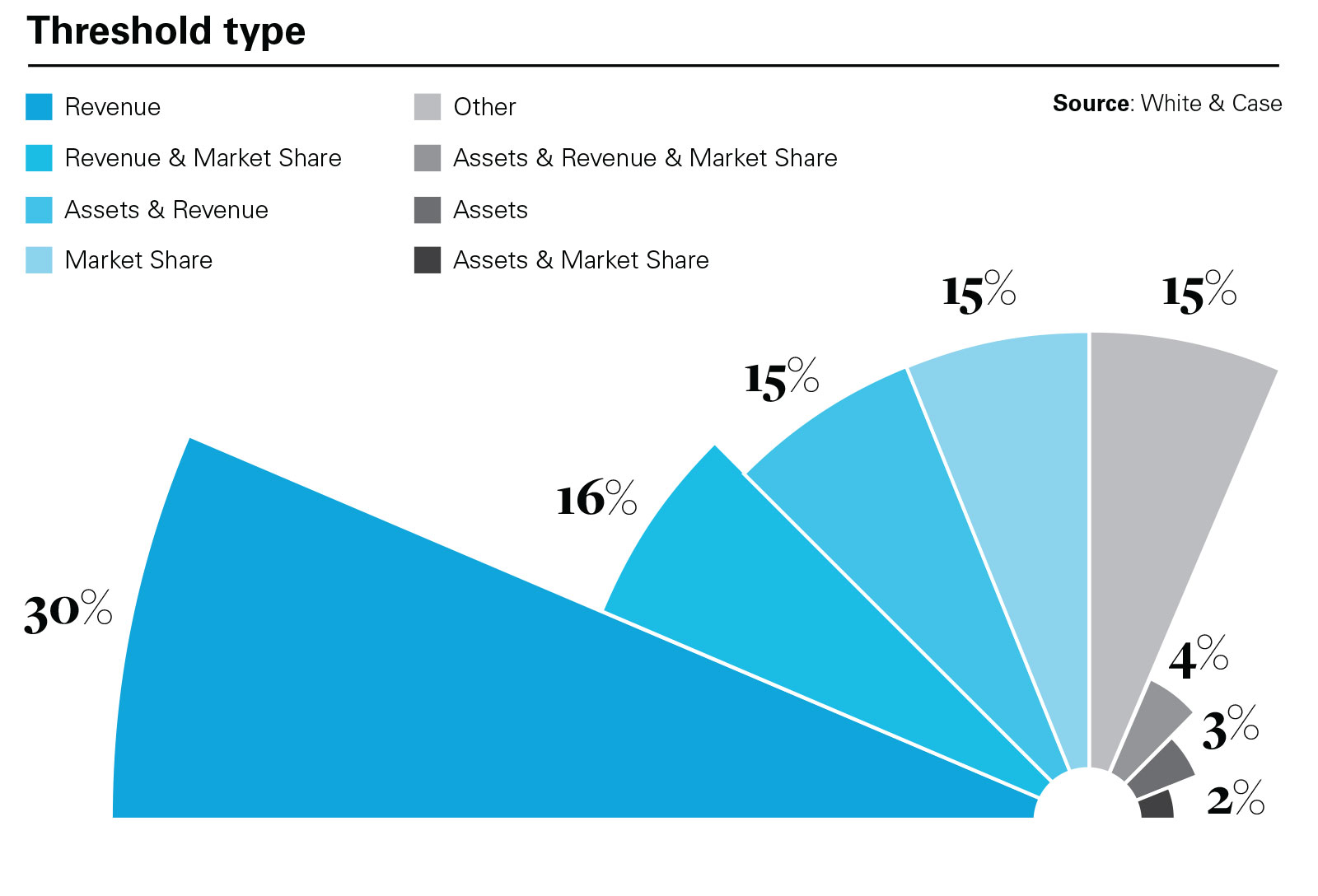 Particular attention to the relevant competition landscape is normally warranted in jurisdictions with voluntary merger control regimes, where it is recommended to file if the transaction is likely to raise competition concerns or else the risk is that the authorities will start investigating the transaction on their own account. This forces the parties to make certain difficult strategic decisions, which can have a significant impact on timing. For example, in Australia—which has a voluntary merger regime—the parties can decide to make a full filing, a very simplified filing or wait for a potential information request. The parties can also decide to close, even when the merger authority is reviewing a transaction, although that can be risky if the authority raises concerns.

"No overlap, no filing?"

The majority of merger control regimes worldwide today require that at least two of the parties to the transaction are active in the relevant jurisdiction for the regime  to be triggered. There are, however, a few exceptions to this general rule, and these countries are generally referred to as "singletrigger" jurisdictions, meaning that it is enough that only one party to the transaction be active in the relevant jurisdiction. In the EU, such exceptions can be found in Spain and Portugal, where transactions may be subject to merger control even when the investing company has no permanent business there, provided the target meets the market share thresholds (no increment is required). In Austria, it is possible for the acquirer alone to trigger the filing obligation. Outside the EU, different regimes prevail. The Ukraine is notorious for its low thresholds, a transaction requiring notification where either party generates €1 million in the country.

"How long will this take?"

Obtaining merger clearance is time-consuming and the review period is regularly protracted as parties often have to enter into pre-notification discussions with merger authorities. As a rule of thumb, it usually takes at least a month to gain clearance, and in jurisdictions with fledgling merger regimes and inexperienced authorities, it can take considerably longer than that. In Japan, for instance, the Japan Fair Trade Commission (JFTC) will send multiple extensive questionnaires during the prenotification process, which can significantly delay the date of filing. The JFTC will carry on sending multiple detailed requests during the official 30-day review period, and if it considers that the parties have not responded quickly enough, it could take even the most straight-forward looking transaction to a phase two review, which can take at least 90 days. Similarly, in Indonesia, the official review period does not start until the Commission for the Supervision of Business Competition (KPPU) has declared the filing complete, which can take two to three months. Indonesia adds an additional layer of difficulty with a voluntary pre-merger filing and  a mandatory post-merger filing (which must be submitted within 30 business days of signing) that is required even if a voluntary premerger filing was submitted. Timings of merger reviews are hard to predict. France is notorious for its "incompleteness letters" that is, letters declaring the filing incomplete and restarting the clock. They may come your way on the penultimate day of the merger review period, sometimes without much warning. They are a powerful tool for the authority to obtain hard- to-get information. China is known for its unpredictable timing. The pre-notification period can be very long, and the Ministry of Commerce (MOFCOM) can even ask that the parties withdraw their filing to gain time. China did, however, introduce a simplified procedure in 2014, which, when applied, has led to speedier reviews. In sum, it takes experience and skills to navigate through the maze of merger control regimes around the world. It also requires an extensive network of offices or legal contacts around the world to ensure appropriate local assistance. Guiding a complex deal over the finish line is like making soufflé: it requires experience, skill and rigour but it's not as hard as it's puffed up to be.