As the flood of capital into riskier deals continues to pour in at unprecedented rates, the prospect of a surge of bond defaults in the years ahead is looming over high yield investors.

There have been record levels of issuances in Europe's high yield market in recent years. This is due to a well-known set of circumstances that have prevailed in the global economy until quite recently. With interest rates at historic lows following unprecedented injections of monetary stimulus by central banks, investors have accepted ever-riskier investment propositions in the ongoing hunt for yield.

At the same time, banks' once huge risk appetites have been suppressed by both internal caution after the losses incurred and tougher global regulatory constraints, and banks have reduced their risk-weighted assets and cut lending significantly.

Who benefits from this? In short, the global capital markets. Against this backdrop, it's no surprise that Europe hosted the asset class's biggest-ever deal just last year when listed telecoms group Altice raised €12 billion – and still more interest was evident among investors who lodged €100 billion worth of orders.

Yet amid this euphoria, there has been a creeping sense of déjà vu for restructuring advisers.

This explosion in issuance was reminiscent of the 'boom' years of 2002 – 08. Indeed, the search for yield has predictably resulted in some lower-rated credits gaining market access at volumes and rates unthinkable in more sedate times. This is despite the public warnings from bodies such as the US Federal Reserve.

Similarly, where Europe pre-Lehman was predominantly a loan market, recent trends have favoured more complex capital structures involving a combination of loans, high yield bonds and alternative capital solutions, thus creating complex and untested structures outside of the United States (where traditional chapter 11 protections provide the backdrop for certainty of outcome in insolvency and restructuring situations).

So, in this environment, what should you know about high yield restructurings if you have raised money through high yield bonds? What is it that makes these situations so difficult to navigate and different from 'normal' restructurings?

Shift of power to the bondholders

First, in contrast with senior loans, which have maintenance covenants (breach of which will act as an early warning signal), high yield bond deals typically have incurrence covenants, making it often harder to spot a trigger event for a restructuring until a default is imminent or has occurred.

Moreover, since the onset of the economic downturn, the balance of power in restructurings has shifted gradually towards bondholders. Many intercreditor agreements in the post-Lehman era bank-bond deals now incorporate an enhanced set of protections for the bondholders, including the more recent move to 'one dollar–one vote' structures, where all creditors of a specific class vote with equal weight on enforcement and other matters. This, together with greater volumes of high yield debt, has skewed the traditional dynamic in restructuring talks, where banks exercised near-exclusive control over the process and outcome. Bondholders and their advisers now play a much more active role.

Additionally, the strict consent thresholds in high yield bond documentation (amendments to key economic terms typically require 90 per cent principal amount support for European high yield issuers) mean that a consensual solution is often unachievable under other contracts and documentation, given that the bonds are often widely dispersed. This has caused a growth in use of restructuring tools such as the 'Scheme of Arrangement' in the UK.

Both par and distressed bondholders are generally reluctant to engage in early restructuring negotiations as they may come into the possession of non-public price-sensitive information that will 'restrict' them from trading in the bonds. To share with them the information necessary to reach a decision, they will usually insist that they are 'cleansed' shortly thereafter by a release of the information into the public space. This may not be an attractive step in all situations, so legal and financial advisers to the bondholders will play a crucial role.

"Par investors have different outlooks and different buy-in prices, but the ultimate restructuring deal has to work for all," explains Charles Noel-Johnson, managing director at global investment bank Moelis & Company. "Different expectations often lead to severe opposition to particular elements of the proposed deal. Individual dissenters or splinter groups within creditor classes use threats of legal actions to jockey for a better outcome from the ultimate deal." It is again up to the advisers to smooth the process and address the dissenters' concerns in a fair but firm manner.

“While every restructuring is unique, the solutions developed for NWR have reached levels of complexity previously unseen”

Pushing the limits of the possible

While every restructuring is unique, the solutions developed by advisers to New World Resources (NWR), one of Europe's largest coal mining groups with principal operations in the Czech Republic, have reached levels of complexity previously unseen. NWR's restructuring offered important lessons for debtors and creditors when it came to delivering, under time pressure, a commercial deal that worked for all of its stakeholders, while also creating a flexible financing solution for the embattled debtor.

Following a period of growth financed in part with high yield debt, NWR began to experience difficulties in 2012. A collapse in the global coal price left NWR unable to meet its interest and repayment obligations to its creditors of about €64 million a year. By the middle of 2013, the company hired White & Case to explore its options as it realised it needed to take drastic action. "Our capital structure and debt servicing were no longer sustainable. We had to enter a restructuring process, but it was important for everyone to understand and accept it," says Boudewijn Wentink, NWR's chief legal officer.

After the company made an official restructuring announcement, the situation became more complex as distressed debt investors began building positions in the company. However, the presence of specialised active distressed investors ultimately proved beneficial to the process.

As is often the case in complex cross-border restructurings, the company determined that a court-based approach would be best to eliminate potential challenges to the deal from any aggrieved stakeholders. That led to detailed discussions about the optimal process and jurisdiction to use, and NWR ultimately opted for a 'Scheme of Arrangement' under English law. It was the wide-spread acceptance of Schemes that convinced the board to move the company's 'centre of main interests' from the Netherlands to England to establish jurisdiction for the English court.

Months of negotiations ensued between two sets of bondholders, bank lenders, an export credit agency, regulators, government, employee representatives and shareholders. "There were moments in the process when we all thought we were there, but then another problem popped its ugly head over the parapet, and we went back to the drawing board," Wentink remembers.

The eventual solution contained an entire toolkit of unique restructuring methods, including a debt reduction, a new debt issuance, a cash tender offer and a rights issue. However, the transaction also introduced bespoke elements, such as convertible notes and a contingent value rights instrument, to ensure a share in any potential equity upside in a cyclical industry for the creditors. Further, a preferential 'escalator' feature was introduced in the cash tender offer to encourage new money providers to inject necessary capital.

To keep the process on track, a 'toggle' or 'dual-track' Scheme was introduced – the first time this arrangement had ever been used in a Scheme – whereby the consensual deal agreed between all stakeholders would automatically 'toggle' or flip to a senior bondholder-led enforcement plan if certain conditions were not met. "The only reason why NWR is still mining coal and providing people jobs today is that there was a clear disincentive for all stakeholders to be too obstructive," Wentink explains. "That, and the relentless effort of management and advisers to keep the momentum going."

Painful though it may have been, the restructuring was crucial and has enabled NWR to emerge as a stronger company. "The company has a sustainable capital structure for the future with flexible instruments allowing it to overcome short-term issues," says Noel-Johnson. "It has adequate liquidity and an alignment of interests between shareholders and bondholders."

High yield restructurings will inevitably continue in 2015 and beyond as some issuers will struggle to cope with the burdens placed on them as economic and geopolitical conditions continue to evolve and, in many cases, more risky capital structures are implemented. Both investors and corporates need to move decisively.

However, restructurings such as NWR's demonstrate that there are solutions in even the most complex situations. 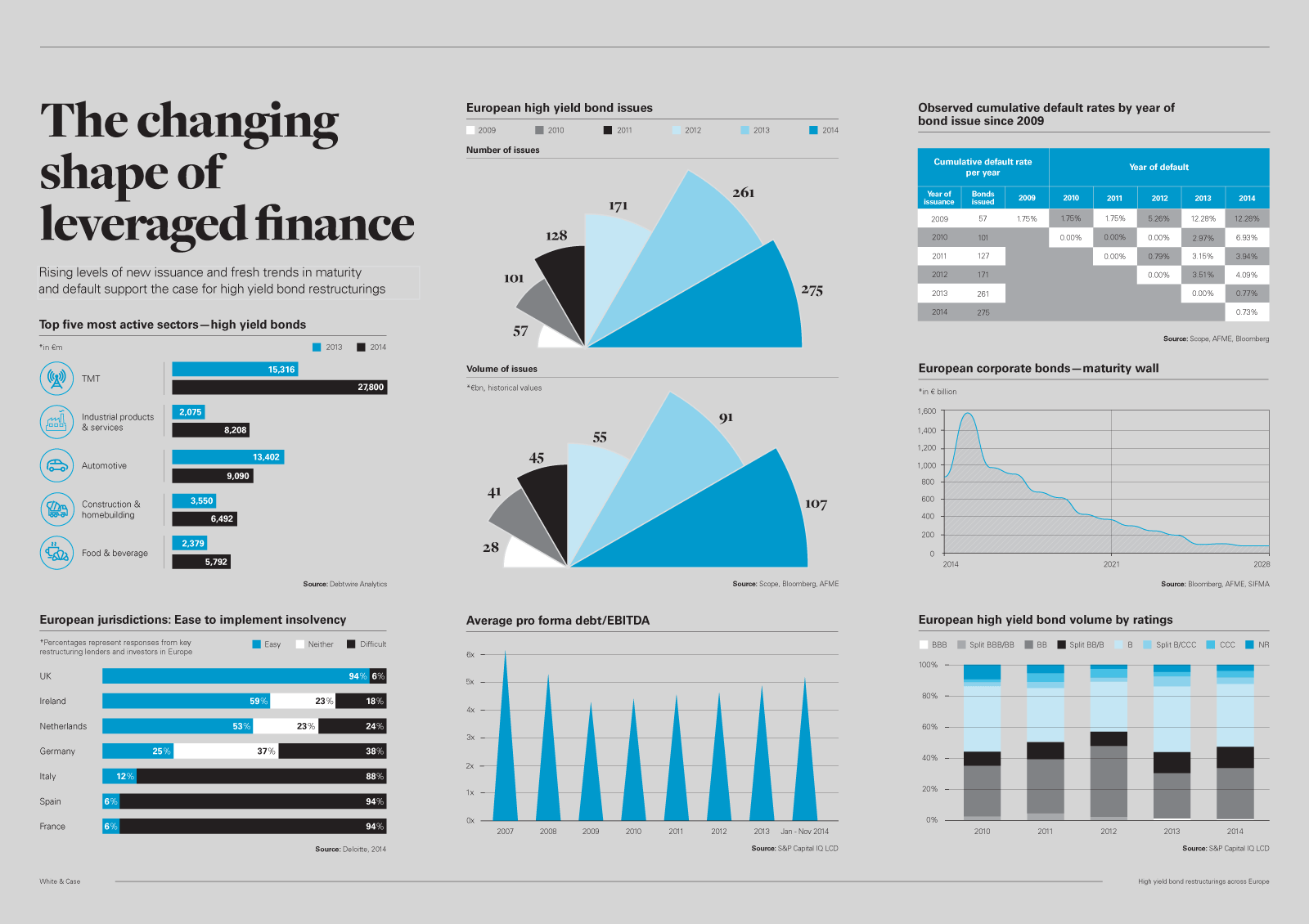