Back
European leveraged debt lifts off

On the refinancing front, one of the more notable deals was the aforementioned WindTre deal. As for M&A-inspired transactions that grabbed the headlines, one standout was UK Micro Focus International's €7.86 billion issuance that backed its acquisition of Hewlett Packard Enterprise's software business.

The continued popularity of cov-lite deals reflects the shifting balance of power between borrowers and lenders in an era of looser monetary policy and lower interest rates.

To date, the flex activity—when pricing on a leveraged loan is cut or increased during the syndication process, depending on investor demand—demonstrates that this is very much an issuers' and sponsors' market. In 2017, downward flexes have outpaced investor-friendly upward flexes by a ratio of nearly 5:1 and in the fourth quarter by 7:1. Moreover, borrowers seem to have the technical upper hand due to the absence of original issue discounts and benchmark floors that have moved lower.

Against this competitive backdrop, it is no surprise that spreads and yields have tightened across the asset classes. The average weighted margin for first-lien institutional loans stooped to their lowest levels in several years at 346 bps versus 414 bps in 2016. The same descent occurred in yield-to-maturity, which came in at 4.3 percent in 2017. The spreads widened in the third quarter, with prices firming to 370 bps up from 355 bps in the second quarter, before tightening to 322 bps in the fourth quarter.

As in the underlying loan market, CLO spreads have come under pressure across the stack in each quarter this year. CLO AAA spreads tightened to an average of 77 bps in the fourth quarter of 2017, ranging from 72 bps to 85 bps on individual deals. Spreads on the other liability tranches have followed a similar trend, reaching their lowest level of the year in the fourth quarter, with AA tranches averaging 123 bps most recently and BB tranches at 510 bps.

The search for yield has also meant a shift towards riskier credits, with 62 percent of leveraged loans which are rated B+ and below compared to 53 percent last year. It is a similar development on the bond side, with 43 percent of rated credits at B+ or lower, up from 30 percent a year ago.

Term loan B (TLB) has also gained a wide following, with issuance of €92.6 billion in 2017 exceeding the €55.1 billion worth of deals done in 2016. TLB cov-lite have been a particular favourite, with €74.1 billion coming onto the market, a substantial hike from the €29.4 billion seen last year.

Although refinancing has been the most popular theme, M&A volume has also been supportive, with healthy deal flows that have already exceeded last year's level— jumbo loans have been a major feature of 2017. This is reflected in Debtwire's figures, which show that leveraged loans emanating from M&A activity (excluding LBOs) were worth €35.7 billion in 2017 compared to the €16.8 billion in 2016. Meanwhile, high yield bond issuance for M&A (excluding LBOs) was €7.8 billion, up from €4.7 billion last year.

Research from Debtwire also found that the average total adjusted leverage ratio for the deals it analysed was 5.3x, while M&A transactions came in at 5.8x. On a net adjusted level, leverage averaged 4.9x overall and 5.6x for M&A deals. This is in line with the ECB guidance, issued earlier in the year, which stated that leverage ratios should not exceed six times.

Although they barely existed in the pre-financial crisis days, cov-lite loans have become a firm fixture of the European leveraged loan landscape

The growth and popularity of cov-lite deals reflects the shifting balance of power between borrowers and lenders in an era of looser monetary policy, lower interest rates and an increasing institutional investor base. In other words, yield-seeking investors are willing to embrace more risk against limited deal flow. In 2017, the share of first-lien institutional loan issuance that was cov-lite topped 76 percent, up from a 27 percent share in the first half of 2016 and 52 percent in H2 2016.

While a European cov-lite loan sees the removal of maintenance covenants, it also typically has a so-called springing leveraged covenant in the revolving credit facility. Historically, these were tested when between25 percent and 30 percent of the revolving credit facility was drawn. However, usage triggers have moved higher in 2017, with 47 percent of credits having a trigger greater than 35 percent compared to 18 percent of loans last year. 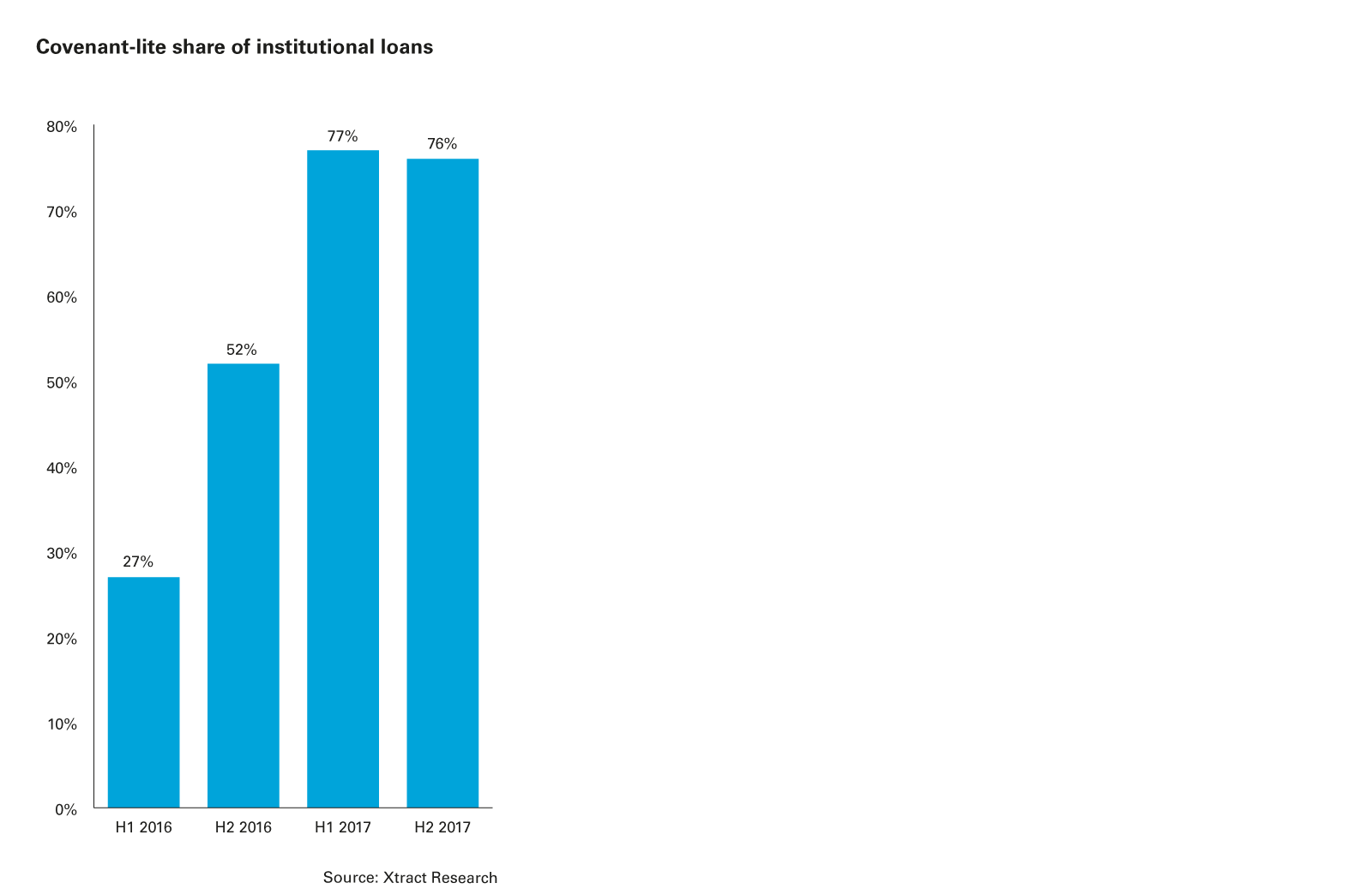 From high yield bond to IPO

An initial public offering (IPO) may be a natural step after a high yield bond issuance but, as with any public flotations, market conditions have to be right. For example, Play Communications, the owner of Poland's current largest mobile network operator, Play, raised approximately €1.03 billion when the company floated in the summer and the Gamenet Group, an Italian gaming operator, completed its public listing in the fourth quarter.

The IPO process can leverage key sections of a high yield bond offering memorandum such as risk factors, business, management's discussion and analysis and industry, which provide a good foundation for equity offering documents. The information is easily transferrable and in a readily usable form for the listing process. Moreover, given the ongoing reporting obligations in the high yield bond covenant package, a substantial amount of the business and financial disclosure can be easily updated with pre-existing materials. This is even the case if some time has passed since the issuer's high yield bond offering.

During 2017, services (€32.6 billion), chemicals and materials (€23.5 billion) and financial services (€18.6 billion) were the top three sectors comprising over 25 percent of leveraged loan issuance. Automotive at €16.2 billion and medical at €15.6 billion were next in line. While refinancings were a key factor, others also tapped the markets for new money.

On the high yield side, financial services were out in front with €19.33 billion and a 17 percent share of the total bond issuance value. Debt service providers such as Cabot Credit Management, the UK's largest debt collector, and Amigo Loans have been most active as they looked to refinance both debt and new capital. 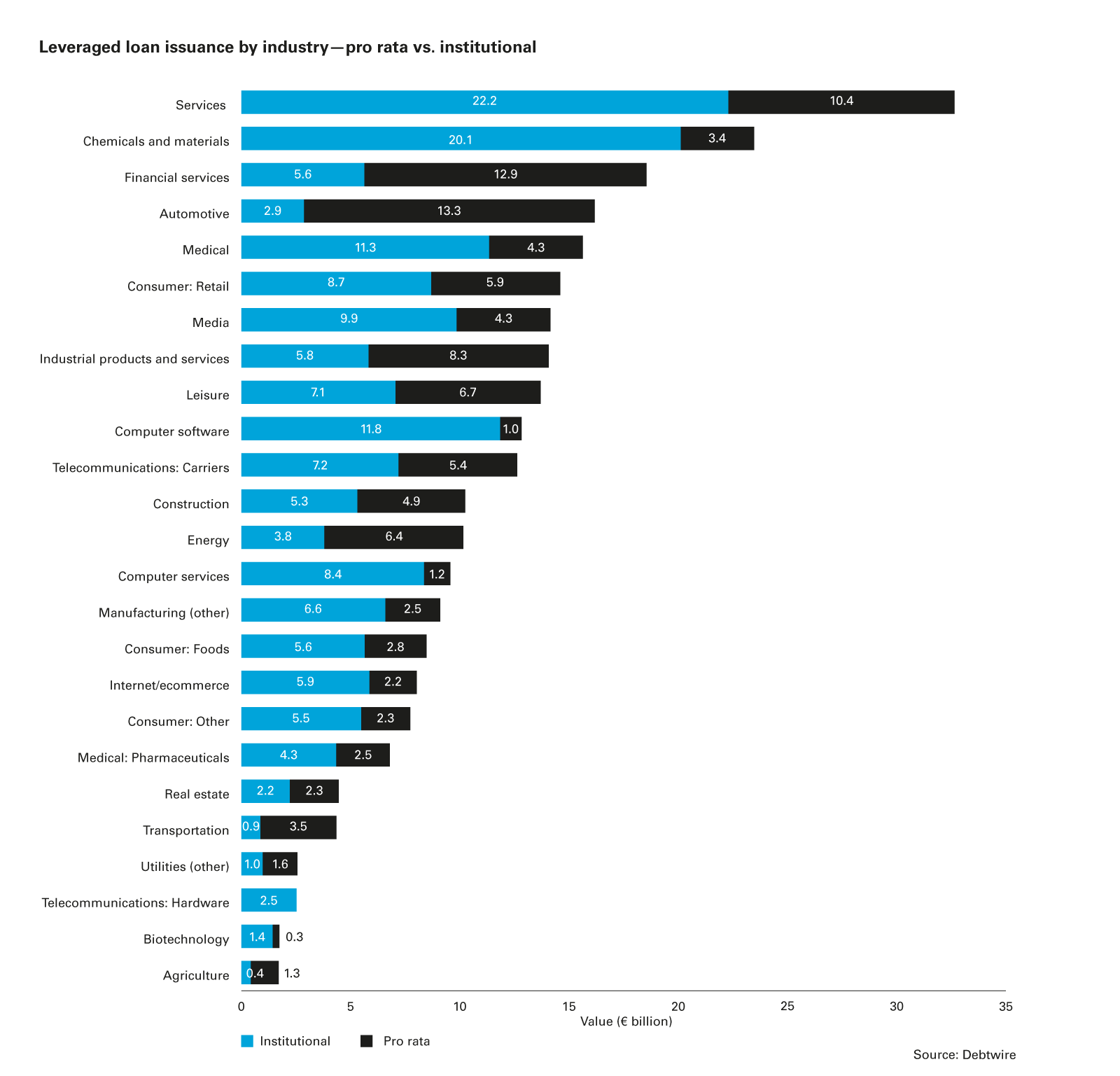