Back
Ten years on: The surprising resilience of European leveraged finance

• European loans backing LBOs are valued at €56.5 billion, up 37 per cent from last year • Cov‑lite deals dominate the loan market, with the share of cov-lite institutional loans standing at 81 per cent in 2018 • CLOs are driving the demand for the asset class, with a new post-crisis record of €27.2 billion of new issuance and a further €18 billion of reset/refinance issuance in 2018

Loans backing LBOs have driven the market in Europe this year, with volumes reaching €56.5 billion, up 37 per cent from €41.3 billion in 2017. By the middle of 2018, total loans in the US breached US$100 billion, up a third on the same period a year earlier. Encouraging signals from the Federal Reserve, which said it was comfortable with the level of risk banks were taking when financing LBOs, helped bring megadeals to the fore. Even in October, when markets had slowed down slightly, KKR's US$5.6 billion buyout of Envision Healthcare Corp. added to the large deals in 2018.

This was also the case for high yield bonds. Bonds backing LBOs accounted for €10.5 billion of new issuance in Europe in 2018, up from just €2.2 billion in 2017. One major addition to this high yield bond pile was Spanish company Cirsa Gaming's €1.56 issuance backing its buyout by Blackstone. Another was the €1.3 billion bond issued by CVC in October for its majority take- private of the Italian pharmaceutical group Recordati. 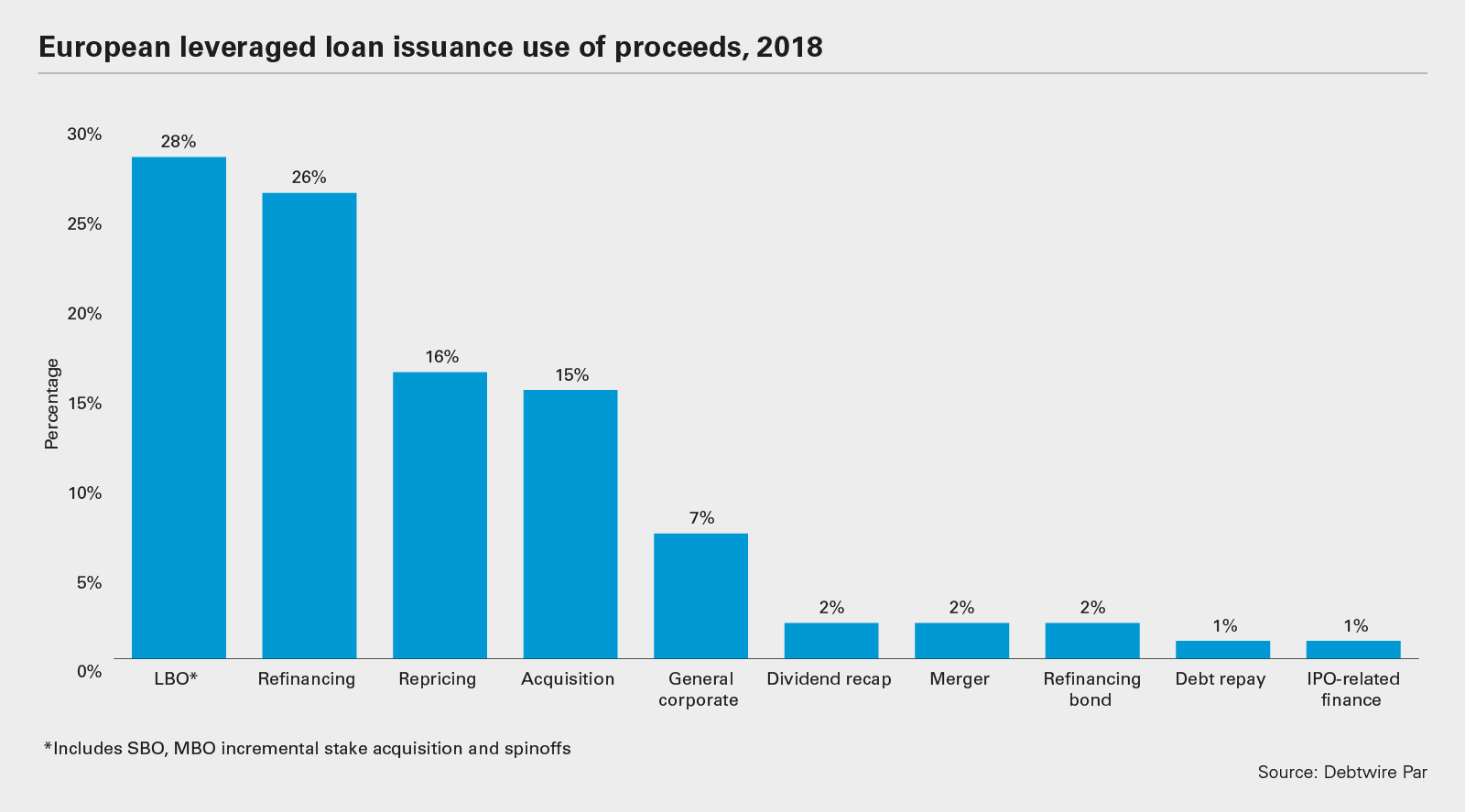 As the volume levels dropped from a bumper 2017, borrowers still found an eager market as lenders remained hungry for yield

As the volume levels dropped from a bumper 2017, borrowers still found an eager market as lenders remained hungry for yield. However, perhaps due to the number of deals seeking to borrow from the market, there was a pushback from lenders in early summer, pushing up pricing by between 25 and 50 basis points. Some borrowers—and their backers—had to decide whether to compromise on terms or pay a little more for flexibility. By the end of the summer, though, the power had shifted back to the issuers, with downward flexes returning as the norm. In September, downward flexes outpaced those moving upward by seven to zero. Notably some of the deals that flexed in September were jumbo loans such as Akzo Nobel, with lenders still keen to stay with the market.

The record amount of dry powder in private equity coffers looking to be put to work—estimated to be approximately US$1.14 trillion by Moody's Investor Services—combined with an increasingly sophisticated set of debt and credit investors who have become used to cov-lite terms, suggests a market likely to continue favouring borrowers/issuers for some time to come. In the US, for example, Bloomberg reported that some US$4.9 billion was repriced in October of 2018, as issuers demanded better deals from lenders in the year's leanest month for issuance so far.

This supply/demand imbalance meant looser terms, and better pricing for borrowers was on offer in the loan market than for the high yield bond market. Meanwhile, the search for yield means that these same investors are willing to move towards riskier credits. In Q3 alone, 59 per cent of European loans were rated B+ or below. Meanwhile, high yield bonds rated B+ or below accounted for 46 per cent of total European issuance in the same period. 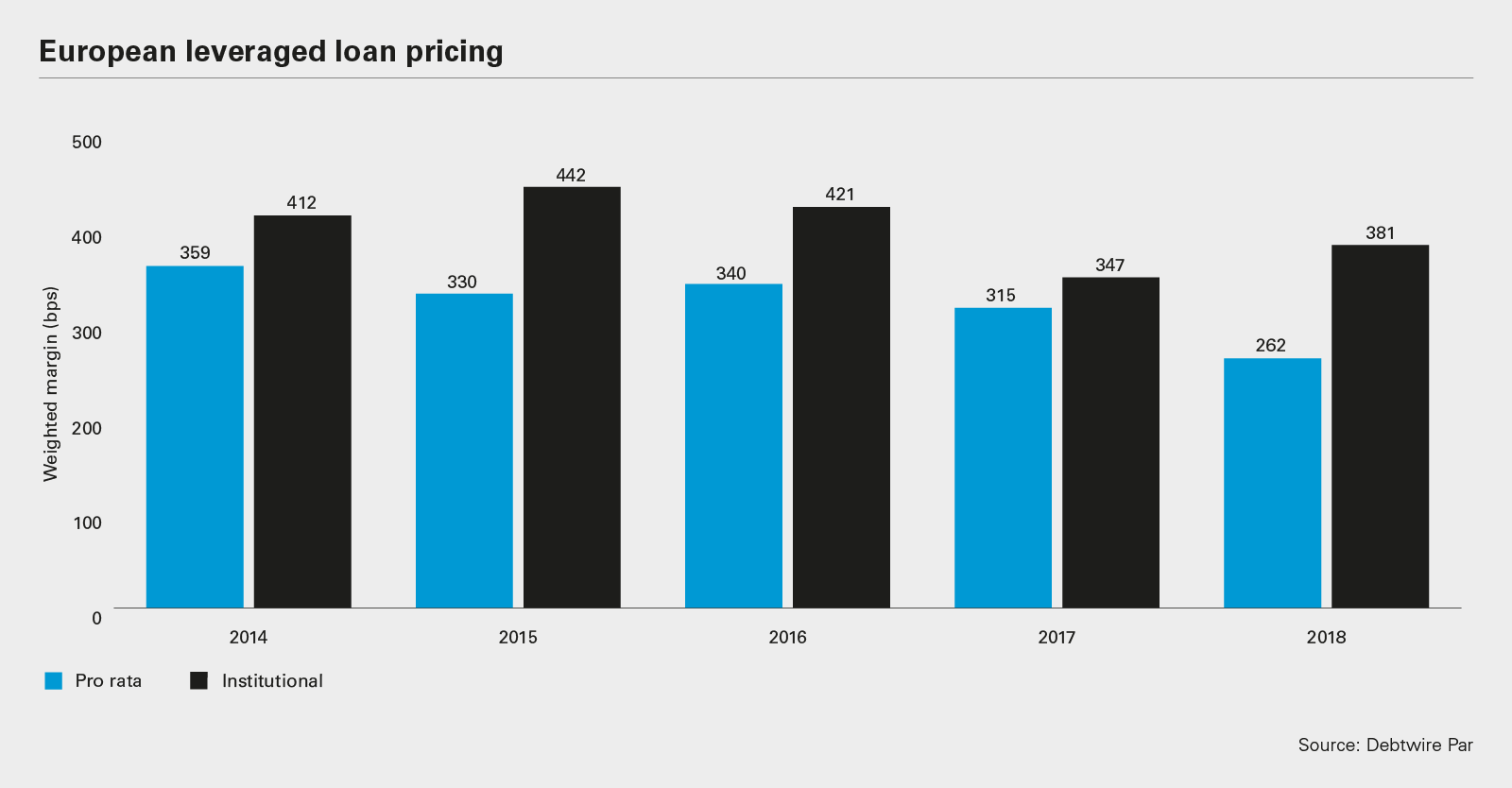 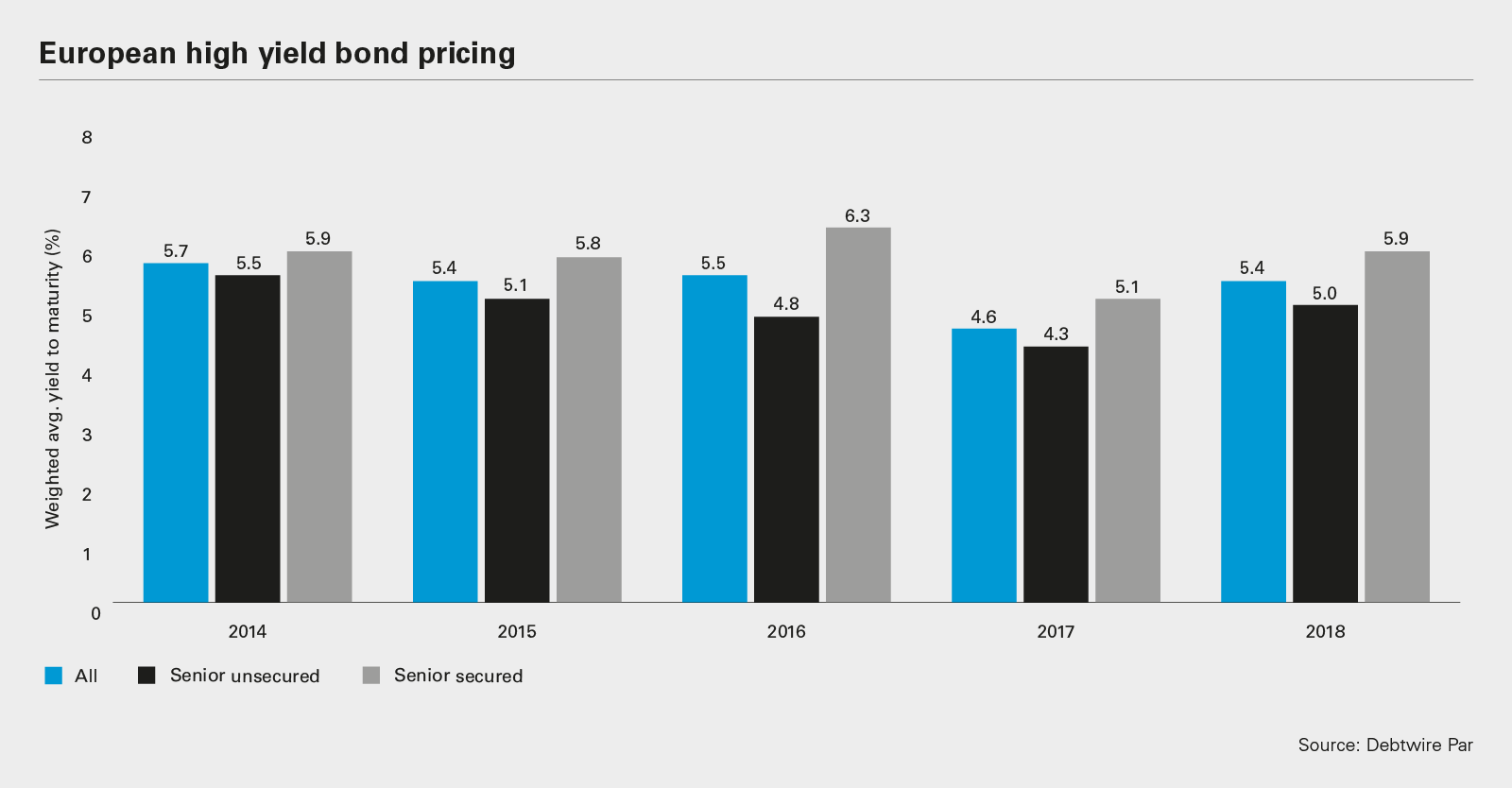 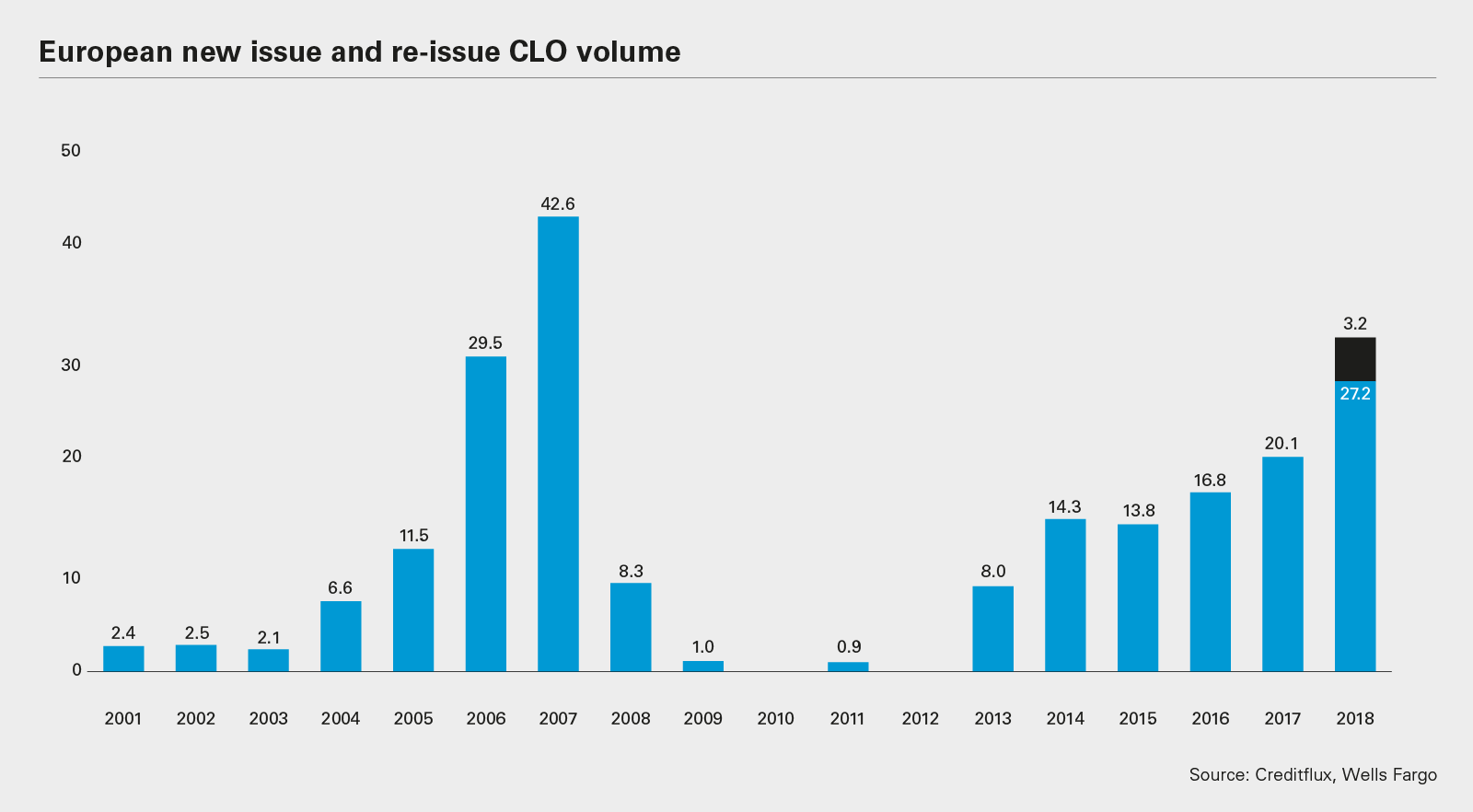 Following a collapse in issuance after the crisis, the post-crisis CLO 2.0 has found favour again. CLOs reached a new post-crisis record, with €27.3 billion issued in 2018

Liquidity in the market has been given an additional boost through the resurgence of the CLO market.

Following a collapse in issuance after the crisis, the post-crisis CLO 2.0 has found favour again. CLOs reached a new post-crisis record, with €27.2 billion issued in 2018. As well as new issues, the trend for reset/refinance transactions also continued in 2018, driven by competitive pricing, with a further €16.1 billion of issuance.

Due to the increased presence of CLOs in the market, banks are able to syndicate deals widely and hold less on their balance sheets, enabling a greater volume of deals to be done. While still only at half the volumes seen before the financial crisis, these structured instruments are finding increasing favour with investors. New US CLO issuance was a record US$150 billion in 2018, surpassing the previous US$124.1 billion high set in 2014.

Although a much bigger market in the US, CLOs in Europe seem set to grow as investors' hunt for yield continues, thereby increasing the demand for additional paper from borrowers. Default rates for CLOs continue to be low, as diversification within each CLO should dampen the risk of default in a market stress scenario.

Moreover, the growth of CLOs has contributed heavily to the overwhelming preference for loans over bonds. CLOs only invest in floating rate instruments, which means that loans would be their preferred investment.

A corollary effect of the emergence of CLOs is the increased demand for floating rate bonds (even though overall issuance of HY bonds has diminished) since CLOs often retain some space in their portfolios for a limited number of floating rate bonds. A typical European CLO usually has a maximum bucket of 30 per cent for high yield. 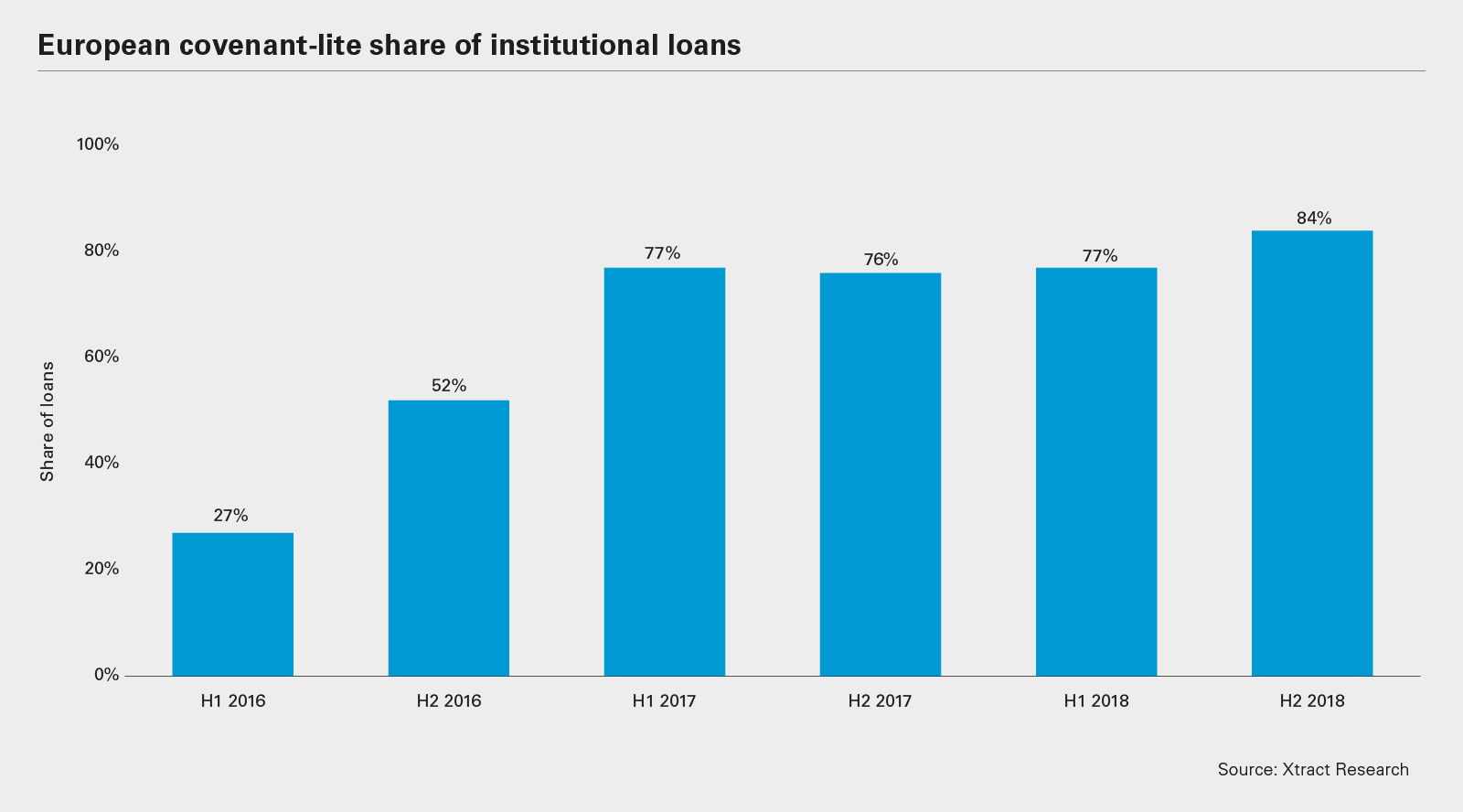 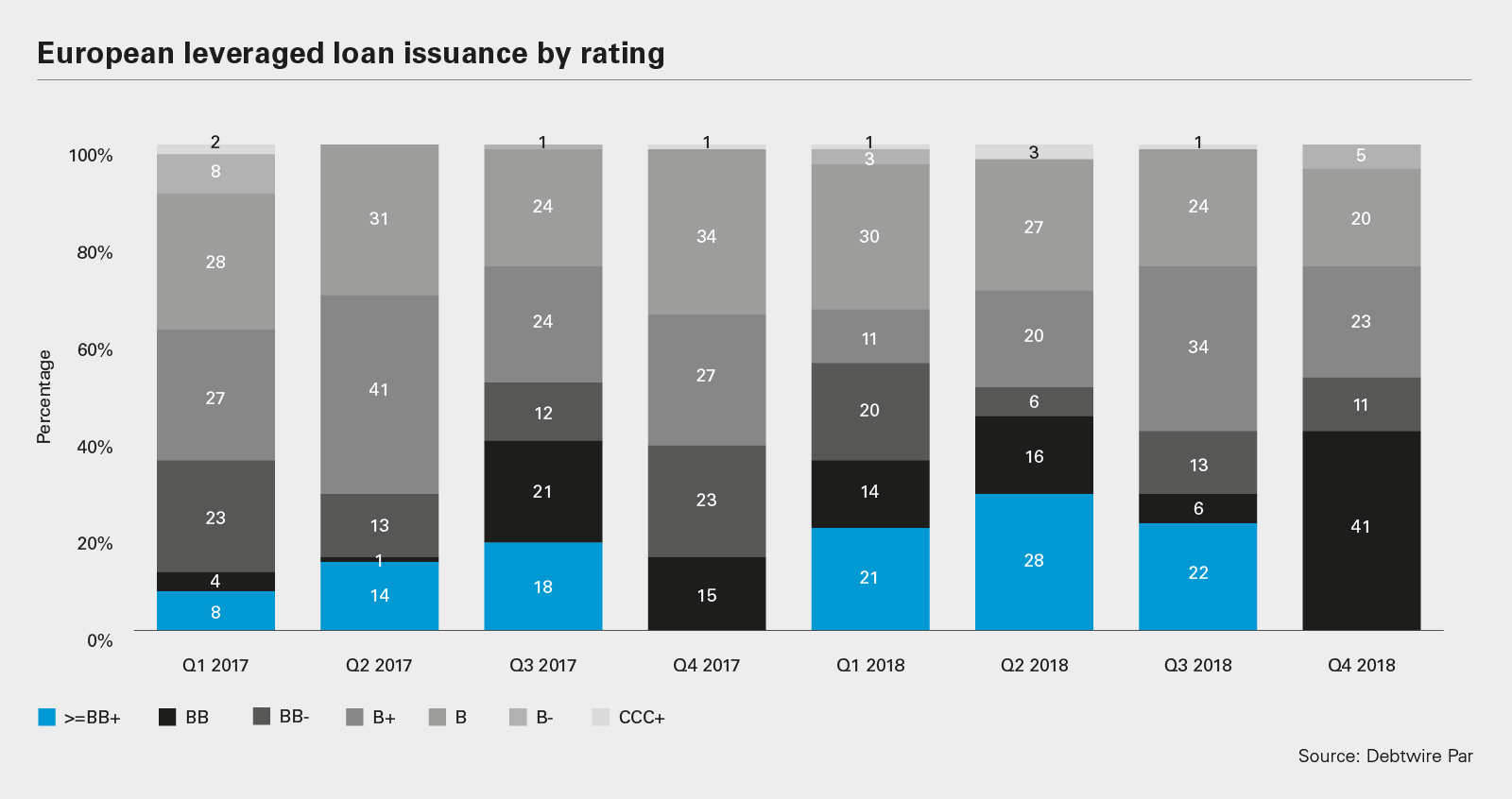 The rise of direct lending

Direct lending funds have emerged in Europe and the US to provide financing to the smallest SMEs and even larger mid-market companies. Direct lenders are often able to offer a bespoke financing package that may not be available in the syndicated loan or high yield markets. From less than €8 billion raised in 2013 by nine such funds, some €32.5 billion flooded in from investors in 2017, filling 25 vehicles in Europe. Volumes in 2018 reached only €22 billion in 19 funds, as those raising capital took a break to allocate their assets.

Where once these managers traditionally stuck to US$100 million deals or below, larger funds are able to offer more substantial loans, with single funds offering US$500 million or more on an increasing basis. This is mainly due to the amount of capital they have to deploy. Ares, one of the largest managers in the sector, closed the largest fund of its type in the past 18 months in Europe at €6.5 billion. Intermediate Capital Group was not far behind with a €5.2 billion close.

Some of these managers seek a single layer of debt or unitranche. Ares struck one of the largest deals in this sector in 2018, with a €364 million loan to UK veterinary group VetPartners, which was also topped up with an equity stake. This funded a management buyout (MBO), although the company was scooped up by private equity giant BC Partners just a few months later. The secondary buyout has been a theme for direct lenders. Some five of the top-ten deals in the past year have funded such acquisitions, with just one refinancing, one MBO and three LBOs being funded by unitranche lenders.

Since 2007, these funds’ assets under management grew from approximately US$200 billion to close to US$650 billion by the end of 2017, according to Preqin. With such huge amounts of dry powder, it is likely that more of these buyout deals in 2019 will involve direct and unitranche lenders, who have the money already on tap, rather than by new capital raisings in uncertain political and economic territory. 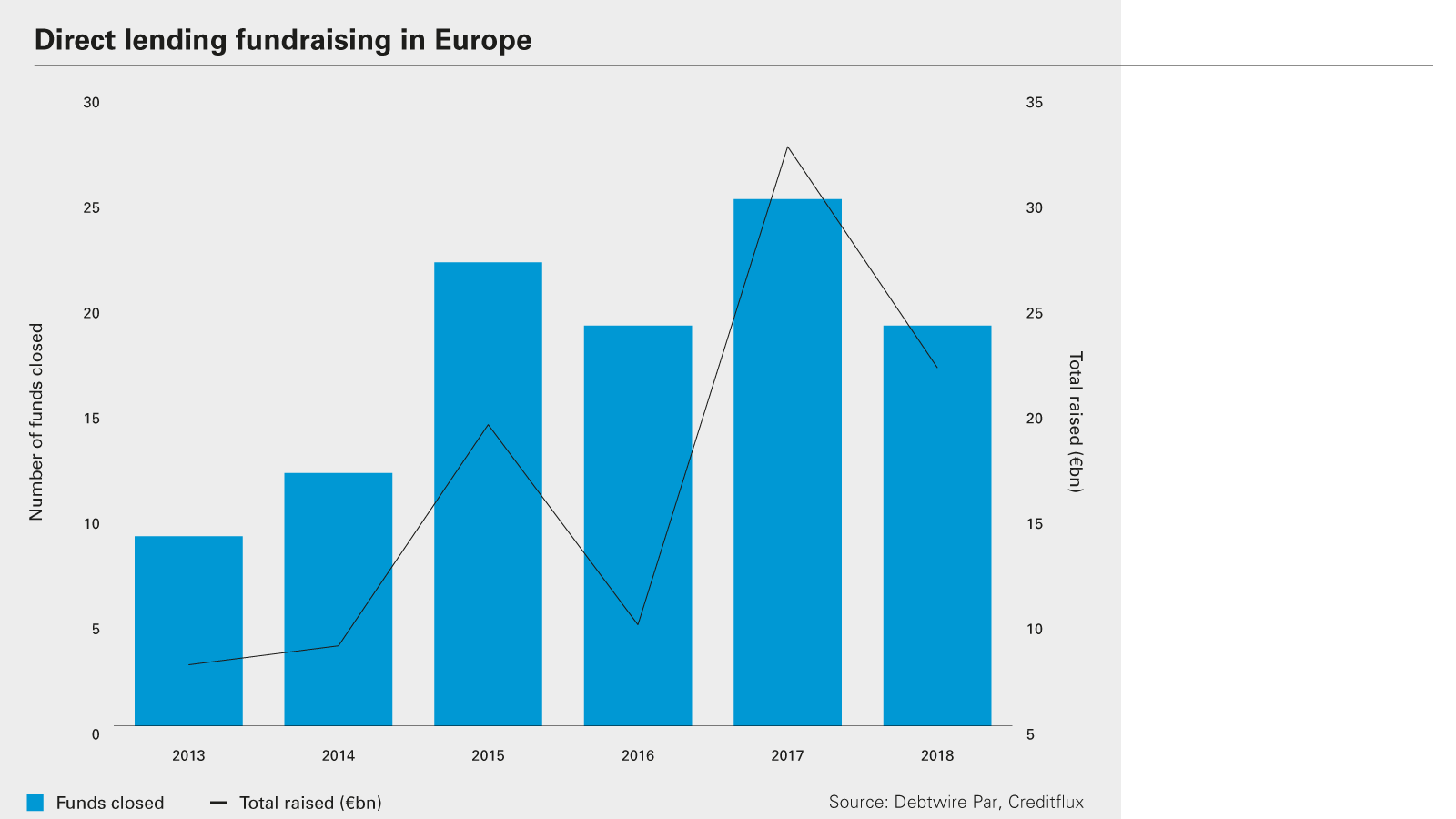 In 2018 in Europe, services (€21 billion), industrials products and services (€18 billion), and consumer: foods (€16 billion) were the top-three sectors, accounting for around 27 per cent of leveraged loan issuance. 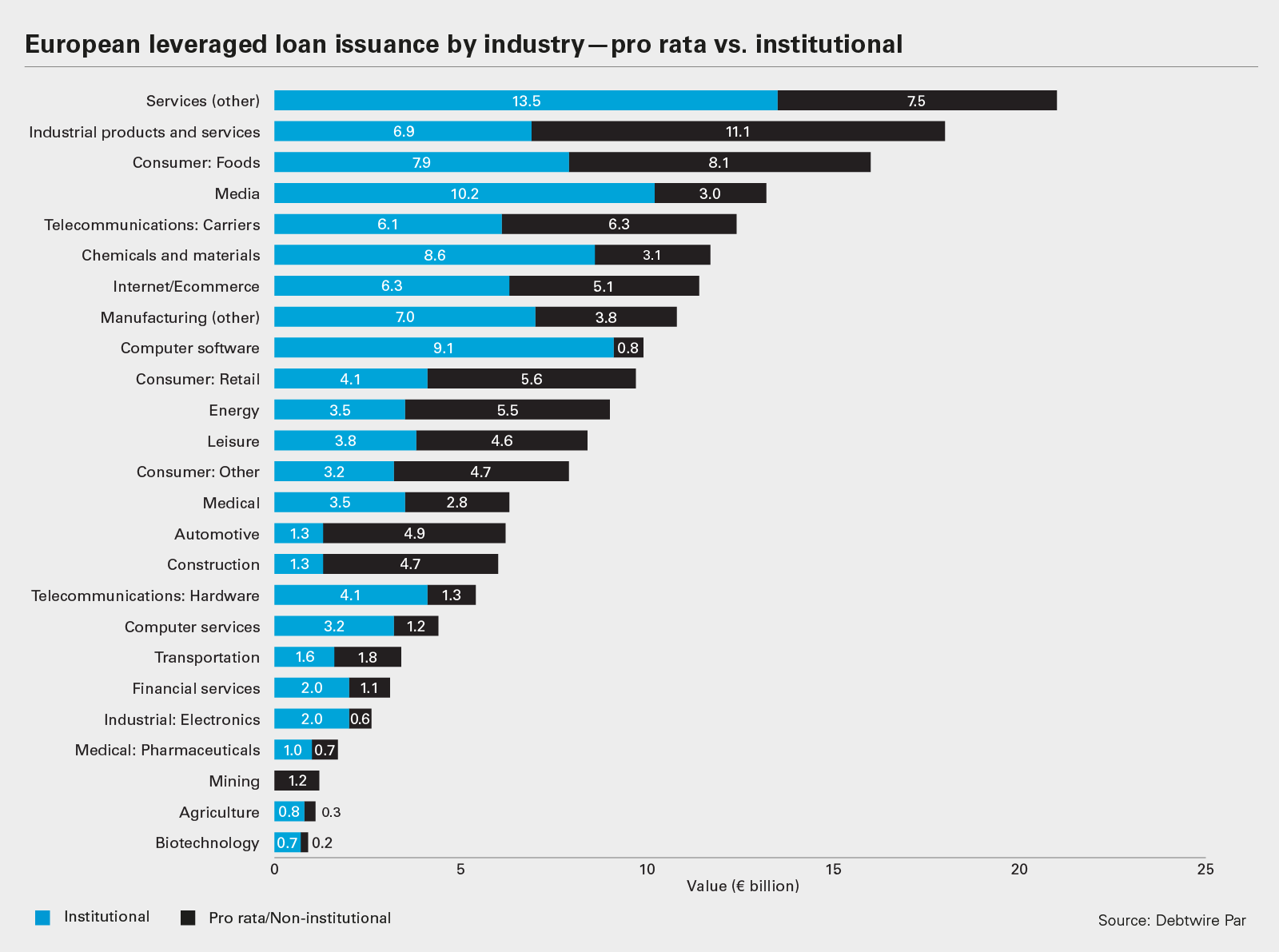