The long arm of the law: Bribery and corruption enforcement investigations

The bribery and corruption risks facing individuals and companies in Africa

Corruption is indeed one of the greatest evils of our time. Corruption rewards those who do not play by the rules and also creates a system of distortion and diversion, thereby destroying all efforts at constructive, just and fair governance.
President Buhari of Nigeria and Champion of the African Union's Theme of the Year for 2018: "Winning the Fight Against Corruption: A Sustainable Path to Africa's Transformation

There is no doubt that corruption remains a serious issue in Africa, as it does worldwide.

Successive governments have pledged its eradication, but it continues to plague society as a whole. There is huge political and popular support for corruption investigations where companies or individuals are deemed to have profited unfairly from such practices. These investigations regularly come to the attention of the press, with significant reputational damage to those involved, and in a number of cases resulting in criminal prosecutions (including fines and imprisonment).

While many of the high-profile corruption cases are investigated and prosecuted by the US and the UK, other jurisdictions—such as France and Kenya (referred to below)—are strengthening their anti-corruption enforcement.

In this era of increasing globalization, there are more joint multijurisdictional investigations, and more information is being shared through mutual legal assistance requests.

Those operating in Africa should be aware of the risks they face when conducting business, and their exposure on both a corporate and an individual level.

In 1977, the US led the way in criminalizing bribes paid to foreign government officials by enacting the Foreign Corrupt Practices Act (FCPA).

The FCPA penalizes bribery of foreign public officials, and African states have been featured in a number of FCPA investigations over the years.

Currently among the FCPA resolutions with the largest total penalties is Och-Ziff Capital Management Group LLC (Och-Ziff), a New York–based hedge fund that settled for more than US$400 million in 20161 and entered into a three-year deferred prosecution agreement (DPA) for bribing foreign officials in the Democratic Republic of Congo (DRC) and Libya. Och-Ziff's subsidiary, OZ Africa Management GP, LLC, a company incorporated in Delaware, also pleaded guilty to an FCPA violation relating to extensive bribery in the DRC.

The "long arm" of the FCPA also extends to non-US citizens. A "fixer" for Och-Ziff, Samuel Mebiame (a Gabon national, and the son of the former Prime Minister of Gabon), was prosecuted and sentenced to two years' imprisonment for his part in Och-Ziff bribery schemes in Niger, Guinea and Chad. According to the US authorities, Mr. Mebiame repeatedly traveled to and from the US during the period of the criminal activity, and used facilities in New York and Florida to further the conspiracy. Specifically, he controlled US bank accounts that received funds from co-conspirators and entered into telephone and email correspondence about the corrupt scheme.

It is not simply US citizens that face exposure under the FCPA. The US can and will prosecute foreign nationals if US authorities feel that there is a sufficient territorial link.

Not quite hot on the heels of the US, the UK has been investigating and prosecuting corruption cases with vigor over the past decade, generating a level of fines never before seen in UK criminal courts.

In 2010, the UK updated its existing bribery regime and passed extremely wide-reaching legislation (the Bribery Act).

Even more stringent than the FCPA, as well as redefining a number of substantive bribery offenses, the Bribery Act created a new type of corporate offense: "failing to prevent bribery." This targets companies that have a "close connection to the UK"—such as foreign companies that operate fully or partially in the UK— even if the corrupt activity itself takes place entirely outside the UK.

Therefore, in principle, an African company could be prosecuted under the Bribery Act for corruption taking place anywhere in the world, as long as it had a footprint in the UK. No other link would be required.

UK citizens and those with a "close connection" to the UK are exposed to potential prosecution even if the corruption took place wholly outside the UK. Non-UK citizens also fall under the UK's jurisdiction under both the Bribery Act and earlier legislation, if part or all of the conduct in question occurred in the UK. In practice, this extra-territorial reach of the Bribery Act has been used by UK law enforcement agencies to investigate and prosecute both individuals who have minimal connections with the UK and conduct that has little or no nexus to the UK.

It is important to remember that facilitation payments (also known as small-level "grease" payments—more common when crossing borders) are wholly outlawed under the Bribery Act, whereas they are permitted within certain circumstances under the FCPA. Companies operating in jurisdictions where this type of payment is more prevalent should be aware of the risks that they might face in terms of exposing them to UK criminal liability.

A number of the UK's recent enforcement cases have concerned allegations of corruption in Africa.

The first use of the "failing to prevent" offense was against Standard Bank in 2015, when (as part of a DPA) the company agreed to pay a US$16.8 million fine, US$8.4 million in disgorgement of profits and a further US$7 million in compensation to the Government of Tanzania. This concerned a corrupt arrangement to make payments to Tanzanian public officials in relation to a private placement scheme. Standard Bank was alleged to have failed to prevent one of its subsidiaries, Stanbic Bank Tanzania Limited, and other individuals associated with it, from committing bribery on its behalf.

More recently, in 2017 Rolls Royce PLC entered into a DPA and was ordered to pay almost £500 million as a result of corrupt arrangements in a number of countries, including Nigeria, as part of a push by Rolls Royce to sell aero engines and energy systems. There is as yet no decision as to whether individuals will face charges in the UK.

Of the current corruption cases being pursued by UK authorities, the Rio Tinto investigation relates to mining activities in Guinea. British American Tobacco faces inquiries into its conduct in Kenya. Most recently, defense company Ultra Electronic Holdings is under the spotlight for business conducted in Algeria. 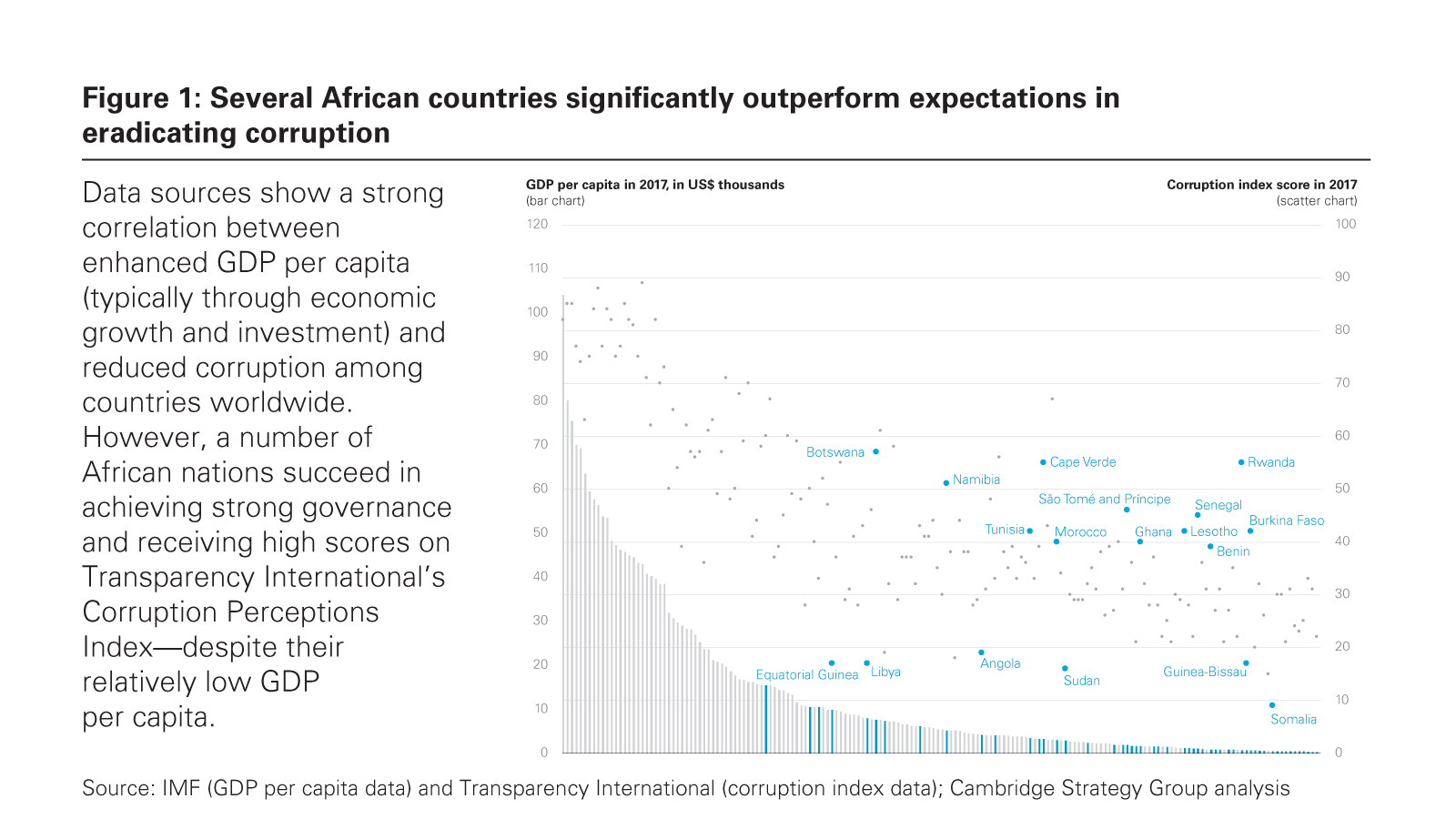 Development banks—such as the World Bank and the African Development Bank—are committed to fighting corruption in any of their projects.

Complaints can arise from a number of sources, including whistleblowers, and disgruntled competitors who feel that improper practices have been deployed in awarding one or more contracts.

Where the allegations are substantiated, companies involved in the misconduct are likely to be barred from engaging in future development bank-financed projects. In the past eight years, the World Bank alone has debarred more than 350 firms and individuals. Then, the investigation findings are passed on to the relevant law enforcement authorities. Over the years, a number of criminal corruption cases have commenced following a Development Bank investigation.

In January 2018, the African Union announced that it was dedicating 2018 to combating corruption.

This follows the implementation of anti-corruption legislation by many African states in recent years. For example, in Kenya a new Bribery Act came into force in January 2017, extending Kenya's anti-corruption laws to the private sector (similar to the UK Bribery Act) and requiring private entities operating in Kenya to have procedures in place to help prevent bribery.

Recent enforcement cases also illustrate that both foreign and domestic companies are increasingly facing prosecution from African authorities for breaches of anti-corruption legislation. For example, in 2015 Algerian authorities fined seven foreign companies and jailed 14 individuals after they were found guilty of corruption and money laundering in the completion of a highway project. The range of penalties included fines for each company and ten years' imprisonment, and a US$35,000 fine for an adviser to a Chinese firm.

Separately, the Nigerian Economic and Financial Crimes Commission (EFCC) has recently brought a case against several oil companies alleging that they secured the purchase of an oilfield through a US$1.3 billion corrupt deal. Current and former senior managers of the companies have been charged. The EFCC has also been asked to investigate payments made by a Geneva-based oil company to four local law firms in Nigeria, as well as the use of company funds to pay for gifts for Nigerian ministers.

Most recently, in June 2018 the offices of one of Africa's largest mobile telecommunications companies, and those of its legal counsel, were raided by representatives from South Africa's Directorate for Priority Crime Investigation (the Hawks). The raids were reportedly part of the Hawks' investigation into allegations that the telecommunications company bribed Iranian officials in relation to the award of a license to operate in Iran.

In addition, significant collaboration occurs between African states and the US and UK authorities as a means of fighting corruption.

At the UK's 2016 Anti-Corruption Summit, both Nigeria and Tanzania formally agreed to partnerships between local and UK authorities to build existing capacities. In another example of collaboration, in May 2018 the UK High Commission in Nigeria announced that it had provided special IT software to the EFCC in Nigeria.

Collaboration with overseas authorities also extends to enforcement actions. For example, in 2015 the US SEC was assisted by the Integrity and Anti-Corruption Department of the African Development Bank and the South African Financial Services Board in its investigation into Hitachi. This led to the charging of Hitachi and a subsequent US$19 million settlement agreement.

This recent increase in enforcement activity shows that African authorities themselves are serious about tackling bribery and corruption.

Companies operating in Africa should therefore be aware that if they breach any applicable anti-corruption legislation, they face a real risk of not only being investigated by authorities in other jurisdictions—such as the US and UK—but also being investigated and prosecuted by African authorities.

In this age of international cooperation and collective enforcement action, there is an increased risk that any misconduct on behalf of individuals or companies operating in Africa is likely to be uncovered.

Both companies and individuals who fall afoul of the wide-reaching anti-corruption legislation described above face significant criminal penalties, including large fines, debarment from government contracts and even jail time. In addition, other collateral consequences of enforcement actions include potential reputational damage as a result of negative publicity and financial damage to shareholders and employees.

Companies and individuals either investing or operating in Africa therefore need to be vigilant in their business practices and should ensure that they have carried out a proper risk assessment and that their anti-bribery and corruption policies and procedures are appropriate and well designed.

1 A combination of civil settlement and criminal penalties.