The United States/Italy deal flow is the most important for Italy.

Italy ranked
23rd
out of 147 countries

According to the M&A Attractiveness Index, developed by the M&A Research Centre at Cass Business School, Italy is now ranked 23rd out of a total of 147 countries in terms of its attractiveness for M&A purposes (i.e., its ability to attract and sustain business activity).

The six-year trend data track Italy as achieving its best rank to date of 23rd most attractive country in 2014 jumping seven positions in one year. A number of reasons are attributed to this rise, but particularly significant were the infrastructure and assets factors.

Italy has seen a high level of investment into its infrastructure

On the negative side, Italy does not score well in terms of regulatory and political ratings. Over the six-year period, there have been improvements in this area, but it has failed to solve its political instability and another factor—the number of days to enforce a contract—still remains high.

Italy has seen a high level of investment into its infrastructure and scores consistently well in this area, particular its improvements in roads, ports and rail. There has also been an increase in the number of registered companies with assets over US$1million. 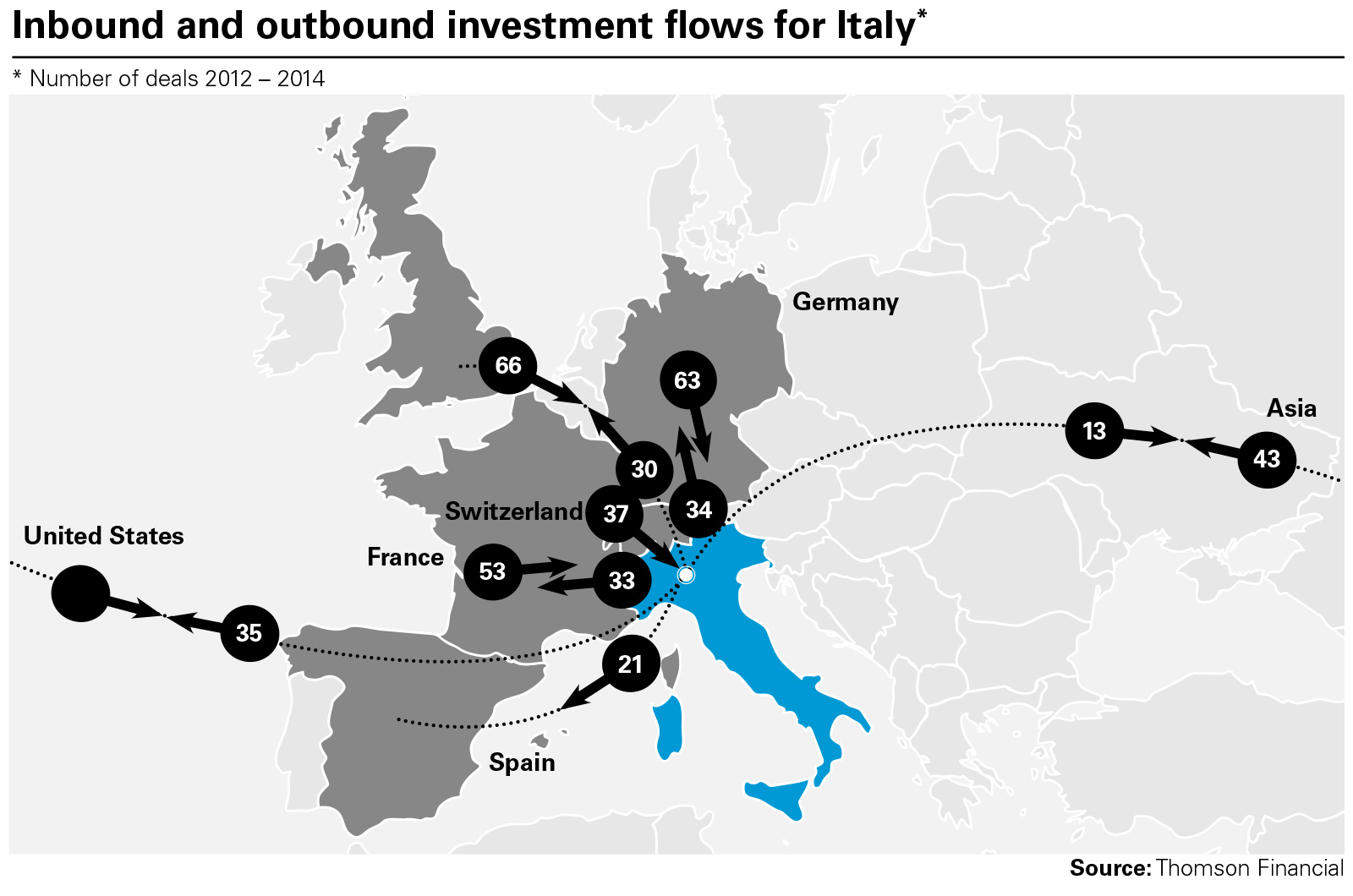 The United States/Italy deal flow is the most important for Italy. US companies have invested into machinery (10 percent of investments), followed by other industrials and textiles and clothing. Italian companies have responded in kind by buying US machinery companies (11 percent) as well as healthcare equipment.

The theme of investment into the machinery sector is also true for the Italy/German dealflow as well as Italian companies buying French machinery companies. For United Kingdom/Italy, Italians are investing in the UK hotel industry, whilst UK companies are buying Italian construction, software and textile and clothing companies.

There is a significant dealflow into Italy from Asia. Again the machinery sector features heavily, but also textiles and clothing. Going the other way, Italian companies are purchasing Asian machinery and automotives and components.

With the increased stability brought by the new prime minister's reforms, it is no surprise that Italy's M&A attractiveness is on the upswing. The mainstay of M&A activity that is up a massive 400 percent year-on-year according to Bloomberg is medium-sized Italian companies known for their expertise in branding, fashion or technology and associated patents. Matteo Renzi's one-two punch of introducing institutional reform while attracting foreign investment sits in stark contrast to past governments' resistance to foreign ownership, especially of quintessentially Italian businesses.

All the better for foreign buyers. In an US$8 billion deal ChemChina acquired tyre manufacturer Pirelli, and Switzerland's Dufry picked up a majority stake in World Duty Free SpA for US$1.5 billion. Several of the largest deals in 2015 have been launched by Asian corporates, while last year saw some brand-new entrants, and Vodaphone returned.

As is the case generally, quantitative easing has kept the cost of doing deals down, and after three years of recession, Italy may offer better value than its European peers. The stage is set for financials, the third-most active sector by deal value in the last five years, as parliament approved a law to transform the largest cooperative banks into joint-stock companies— a precursor, we expect, to a flurry of M&A consolidation.  Indeed, there are 650 banks at the moment, and the European Central Bank has hailed the move.

The government's moves toward labour reform, corporate tax reductions and welcoming foreign investors are mere steps on the road. M&A, and business in general, can be marred by overlong negotiations, complicated company structures, and reluctant family vendors. But such challenges are not insurmountable, and Italy's recovery is a good sign for the near future of the deal landscape. 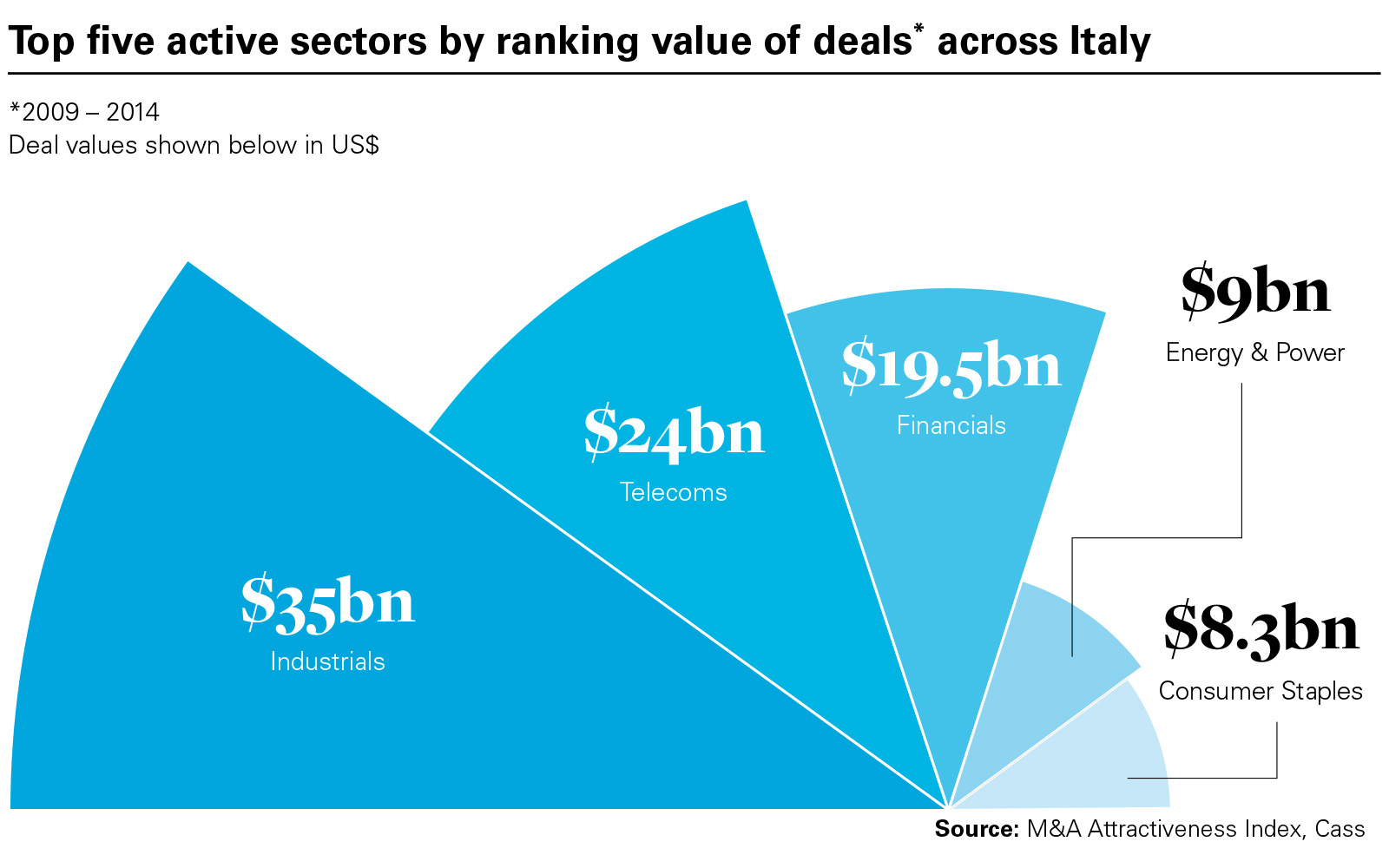