Back
Ten years on: The surprising resilience of European leveraged finance

From protectionism to trade wars to uncertainty over Brexit, 2018 was characterised by uncertainty and volatility. All the while, a divergence in policy between the world's major economies caused lenders and borrowers to sit up and pay attention. In Europe, the UK's withdrawal from the EU, concerns over a new government in Italy, disruption and protests in France and the rise of populism in a number of EU states took the shine off what had been set to be a bumper year in the leveraged debt market. In addition, growth forecasts for the EU fell in 2018. The European Commission estimated the eurozone would grow by 2.1 per cent in 2018, down from the 2.4 per cent growth recorded in 2017. In a report in July, the Commission estimated that growth in 2019 would fall to 2 per cent.

The story in the US has been a different one, with a central bank determined to stop the economy from overheating. Despite having a similar growth rate to Europe in 2017, the world's largest economy looked set to finish 2018 on a 3 per cent increase. This upturn took place despite four interest rate hikes from the Fed, with much of the momentum coming at the end of the year.

Meanwhile, regulators on both sides of the Atlantic have begun sounding the alarm on the amount of leverage in the market. While some observers think there will be intervention, it seems that most believe that regulators may be content to wait for nature to take its course, with a substantial blow-up being enough of a trigger to all market participants to dial down the level of gearing that will be used going forward. This has all led to a change in the dynamics of the market. 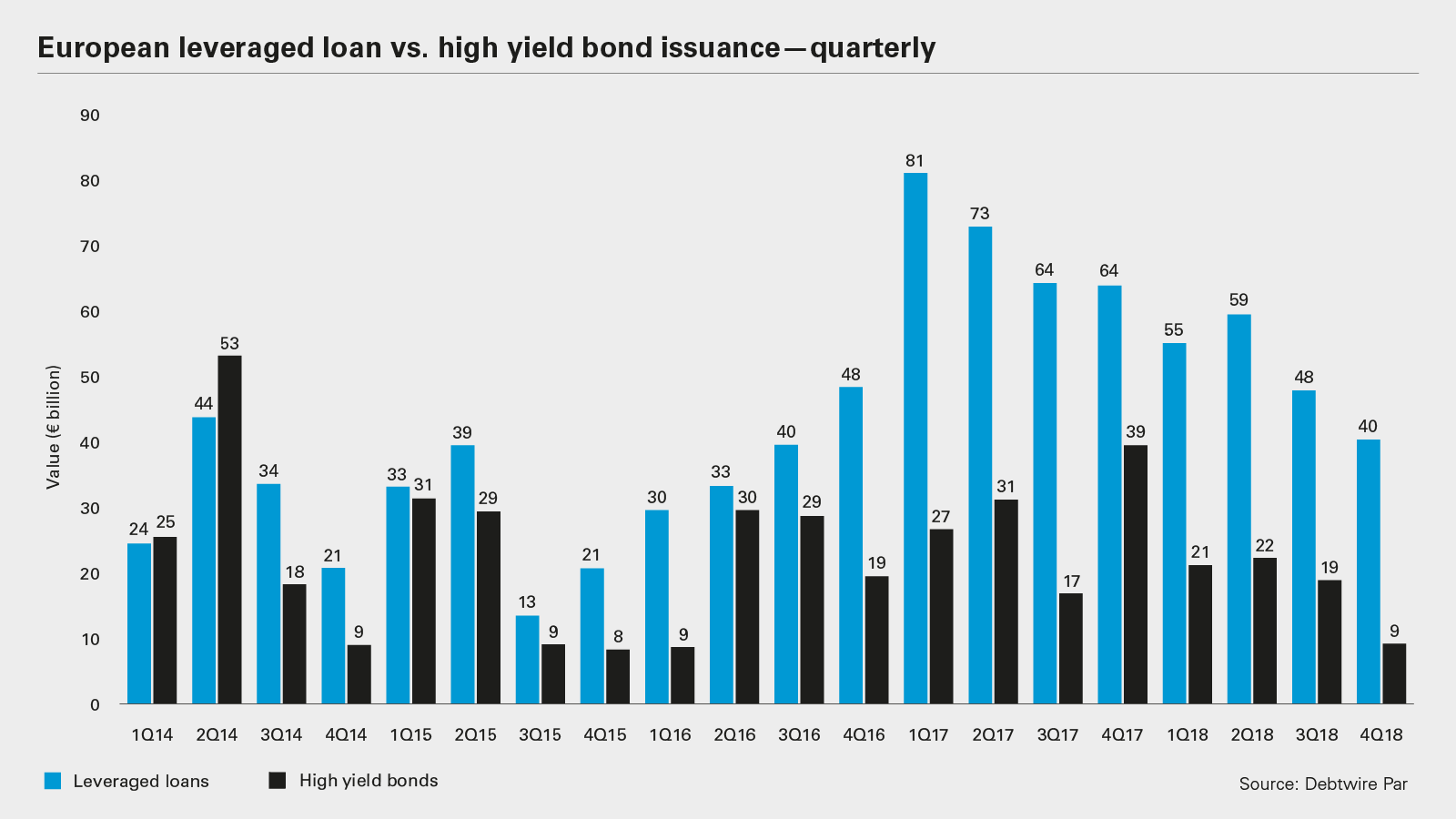 A key driver of the downturn was the fall in refinancing activity, as many issuers had completed deals in 2017 and thus did not need to return to the market in 2018

€27.2 billion
The value of new issuance of CLOs in Europe in 2018—a new post-crisis record

Slowing down but not stopping

A key driver of the downturn was the fall in refinancing activity, as many issuers had completed deals in 2017 and thus did not need to return to the market in 2018. This resulted in high yield bond refinancing activity dropping by 47 per cent year-on-year to €36.8 billion.

At the start of 2017, US interest rates were at just 0.75 per cent. In that year, borrowers in both the US and Europe rushed to market, eager to refinance debt. In 2017, €153.8 billion in leveraged loan refinancing was pushed through in Europe. This helped volume beat previous record levels. However, the story was beginning to change by the end of the year, as the US federal funds rate reached 1.5 per cent. A further 25 basis points was added the following March. As 2018 ended, rates hit 2.5 per cent. This continued increase in the cost of borrowing translated into a 44 per cent drop in leveraged loan refinancing in Europe in 2018—down to €86.7 billion— compared to a year earlier.

However, outside of the refinancing context, the European market benefitted from a number of public-to-private deals and an increase in corporate and sponsor activity—45 per cent of the leveraged loan issuance was used for leveraged buyouts (LBOs) and acquisition activity compared with only 26 per cent for refinancings. There was a spate of bumper deals, including Advent's acquisition of Zentiva and Carlyle's purchase of AkzoNobel—both carried out alongside large institutional investors. For more on LBO activity, see page 9.

The slowdown in the second half of 2018 was more pronounced in light of a bumper first quarter, which saw some 'jumbo' M&A deals that required significant financing from all corners of the debt markets. Despite some predicting 2018 to be an 'all-time high' for M&A, the winds of uncertainty blew through markets, leaving sponsors and other potential acquirers opting to wait for calmer waters. While 2018 did not match the heights of 2017, there needs to be some perspective— overall issuance was still up on issuance in 2016. 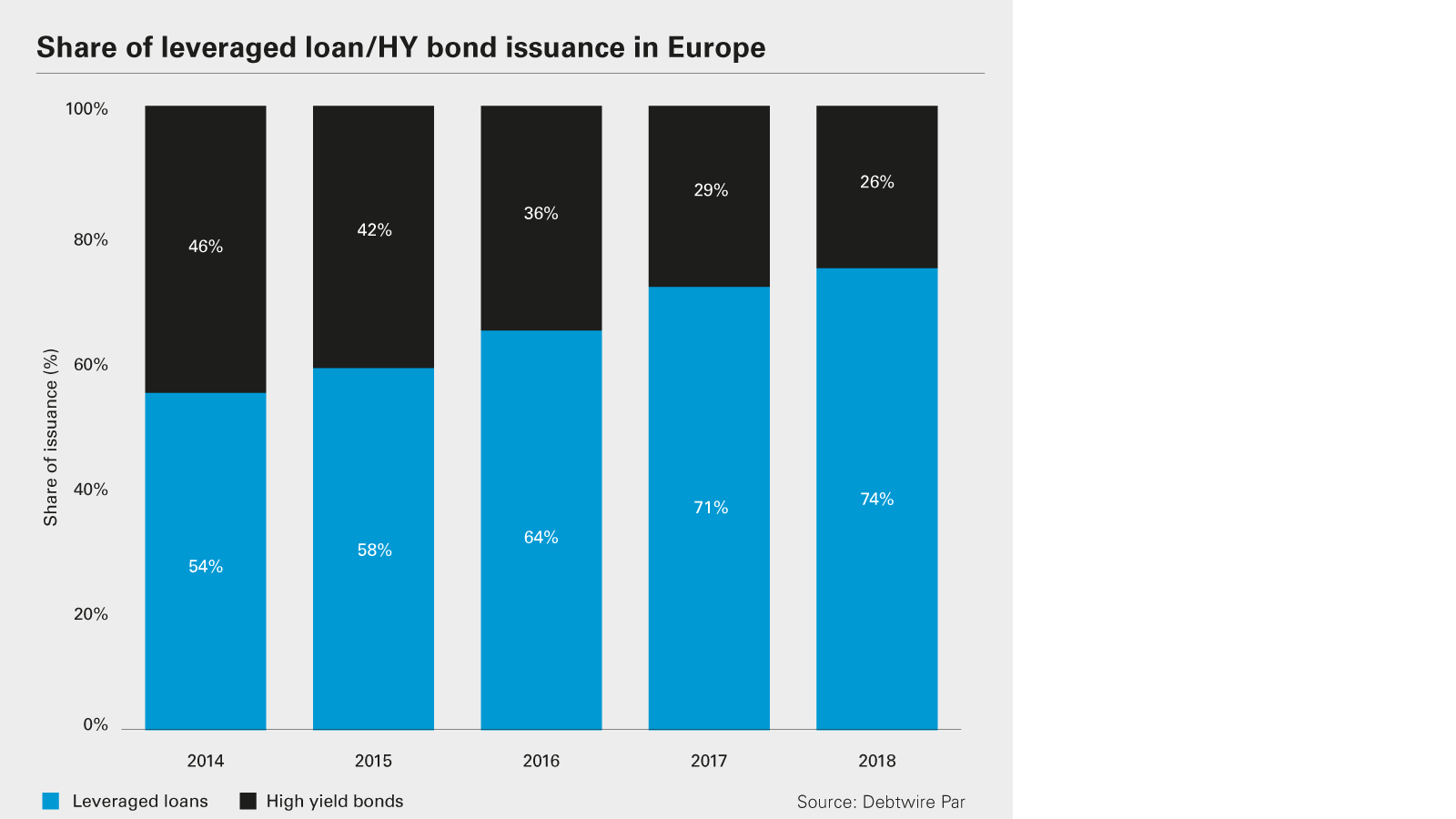 The split between leveraged loans and high yield bonds skewed in favour of loans in 2018. Loans accounted for 74 per cent of European leveraged finance in 2018, according to Debtwire research

Loans in the ascendancy again

Rising interest rates have been one of the main factors driving investors towards loans, given their floating-rate basis (compared to high yield's typical fixed rate basis), which protects investors when central banks hike. In June, the US Federal Reserve announced its seventh interest rate hike since 2015, with a further two rises in both of the following two quarters. In the UK, the Bank of England increased rates to 0.75 per cent (their highest level since March 2009) in August, after an initial 25 basis-point hike in June.

The uptick in loan pricing has been one of the reasons for investors to favour loans. With the gap between bonds and loans narrowing, the potentially looser cov-lite loan terms, as well as more favourable financing features such as control of transfer, the soft-call protection of a loan compared to the hard-call protection of a bond and the non-public nature of loans have enhanced the attractiveness of the loan product. Additionally, loans can be quicker to bring to market and close, and do not require a detailed offering memorandum, which permits a lower outlay on costs and fees.

The growing division between the two parts of the leveraged debt market was also driven by the demand for collateralised debt obligations (CLO). The growth of CLOs has been a decisive factor in the growth of leveraged loans since CLOs favour floating rate products. In Europe, the CLO market set a new post-crisis record, with €27.2 billion of new issuance in 2018, up from €20.1 billion in 2017. The trend for reset/ refinance transactions also continued in 2018, driven by competitive pricing, with a further €18 billion of issuance.