Liquified natural gas (LNG) is a rapidly growing source of energy around the globe for obvious reasons: It is cleaner, cheaper and considerably reduces greenhouse gas emissions.1

Despite their valuable natural gas resources, African countries are straining to strike an adequate balance between their energy supply and demand. This makes it essential for African countries to capitalize on their reserves by investing in LNG projects to meet their energy needs, thereby creating sustainable economic development within the continent. Some countries, such as South Africa and Morocco, hope to successfully pave the way for other African countries, though these types of projects may not be suitable in all circumstances.

The LNG gas-to-power journey is associated with certain foreseeable risks that must be given proper consideration, notably those related to currency and state participation.

Yet a proper assessment of these risks and the implementation of adequate preventive measures, as described below, could allow them to be addressed appropriately.

LNG AS A SOURCE OF ENERGY PRODUCTION

Natural gas is playing an increasingly important role in the world's energy portfolio due to the discovery and development of new gas fields. Between 1980 and 2000, global natural gas consumption doubled.2  By 2016, natural gas accounted for 21.5 percent of world energy consumption.3  The International Energy Agency (IEA) has predicted that natural gas consumption will continue to increase at a rate of 1.6 percent over the next five years, outpacing the growth rate of all other petrochemical sectors. 4

This suggests how much countries recognize LNG to be cheaper than other sources of energy.5 Its lower pollution and greenhouse gas emissions, relative to other carbon-based energy sources, makes its use consistent with the current energy transition schemes.6 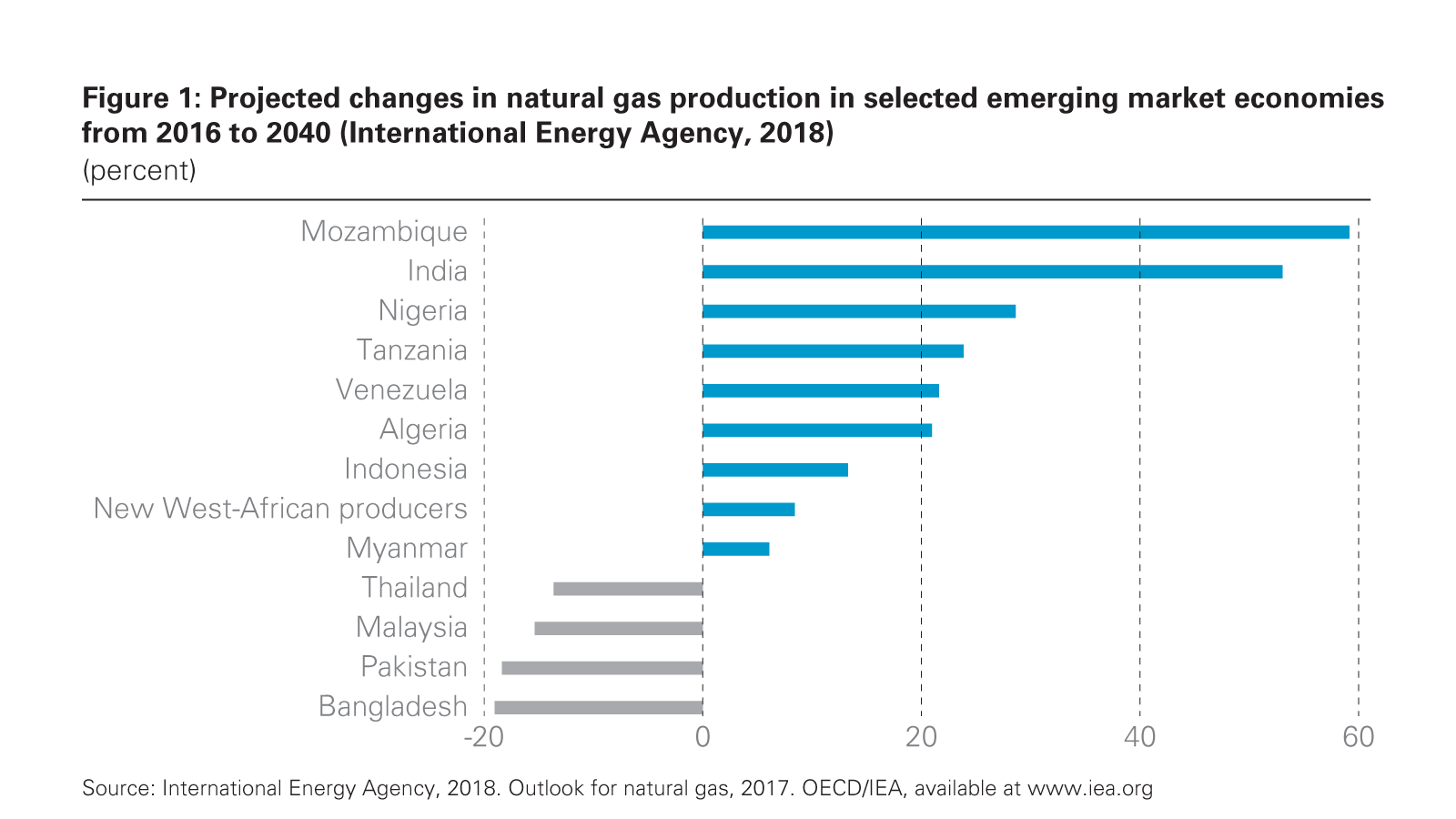 Despite this, and led by Algeria, Nigeria, Angola, Egypt and Equatorial Guinea, new gas discoveries have enabled Africa to emerge as a major supplier of natural gas.

For example, Nigeria, with its estimated 5,300 billion cubic meters (bcm) of gas and rising investments in gas production, is in the process of becoming one of the largest LNG suppliers, after Qatar.10 Recently, Mozambique, Tanzania, Mauritania and Senegal have also emerged as key players in the African gas industry in light of their newly discovered gas reserves.

These LNG discoveries have come at a critical time, as Africa is in the midst of an energy crisis.11  Some estimate that "only 24 percent of sub-Saharan Africans have access to electricity, and the energy generation capacity of Africa (excluding South Africa) is only 28 gigawatts, equal to that of Argentina alone."12

Despite these shortages, Africa's demand for energy is predicted to rise with increasing population, urbanization and economic productivity. According to the World Bank, African manufacturing enterprises experience power outages on average 56 days per year.13  Given Africa's existing power deficit, it is incumbent upon the region to address the current and future power supply, transmission and distribution needs.

LNG's share of Africa's primary energy demand (total energy demand from all sources) excluding biomass will likely increase modestly, from 15 percent in 2020 to 18 percent in 2035 (Figure 2). As a source of energy for electricity generation, LNG could grow from 10 percent of installed capacity in 2015 to 23 percent by 2030 (Figure 3). 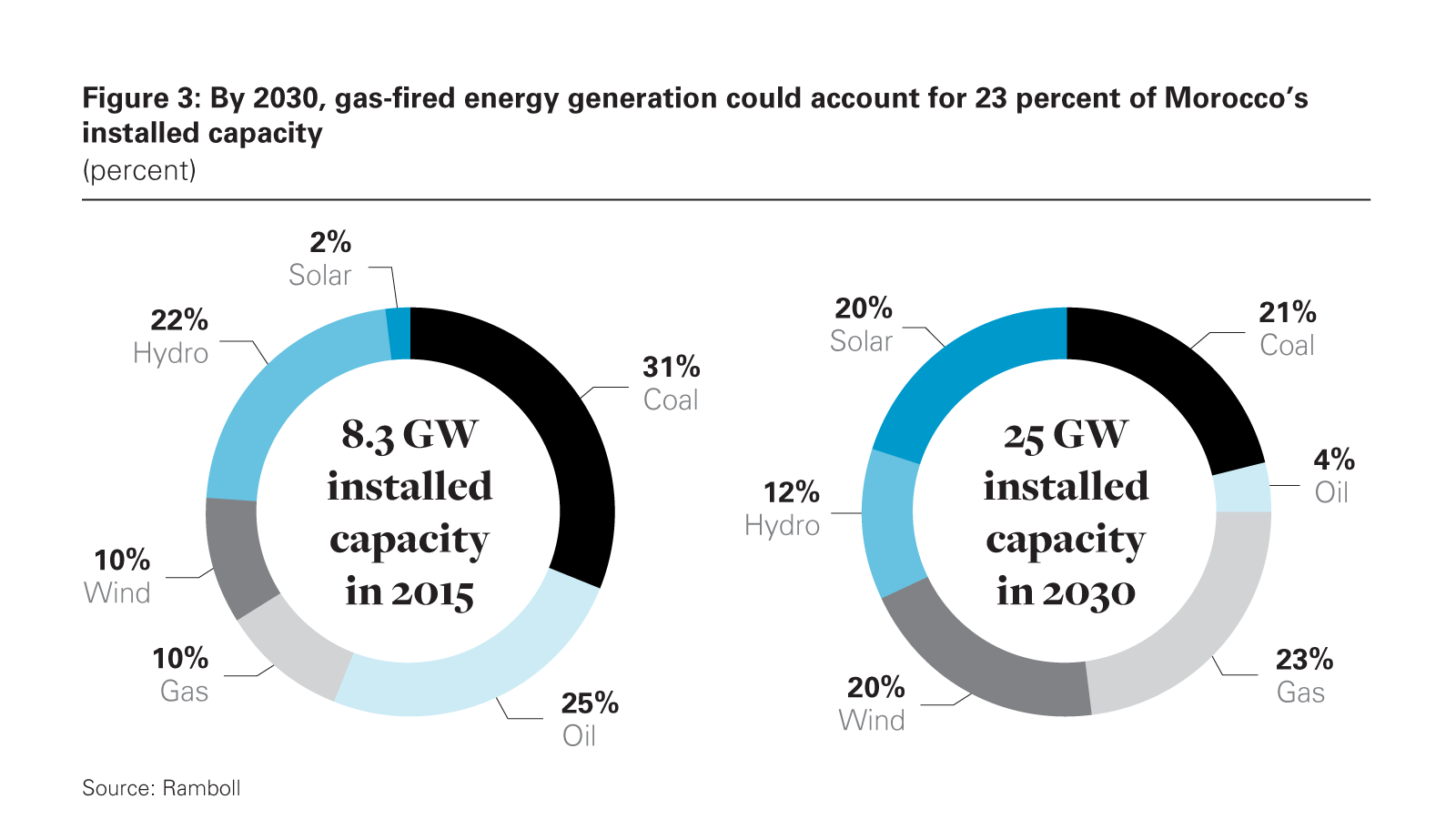 Countries such as Mozambique are rising within the LNG sector globally. Mozambique is expected to be a future leader in the global LNG industry given its plan to develop an LNG facility on the Afungi Peninsula in the Cabo Delgado province.14

CURRENT ATTEMPTS IN AFRICA: A FOCUS ON MOROCCO

To date, there have been very few gas-to-power initiatives in Africa.

Morocco intends to develop a gas-to-power project that is the first of its kind in Morocco and more generally in the French-speaking area of Africa. Morocco is highly dependent on imported energy and remains one of the largest net importers of hydrocarbons in North Africa.15 More than 90 percent of its energy comes from other countries, including coal and oil arriving from world markets (such as gas from Algeria and imported electricity from Spain and other African countries).16

Encouraged by the increasing need for electricity, Morocco has recently decided to expand the use of LNG through a gas-to-power project. Despite delays in the initial timeline, the government has mentioned its full support for the project on several occasions. The project involves the construction of a new LNG terminal within five years at Jorf Lasfar port, near the western city of El Jadida.  It will allow up to 7 bcm of gas to be imported by 2025, substantially diversifying energy imports. The terminal, along with the construction of a jetty and necessary pipeline infrastructure, is estimated to cost US$4.6 billion. The Moroccan government also launched an international tender seeking foreign investments for the LNG terminal, which attracted bids from more than 93 companies, including French, British, Spanish and American companies.

By 2020, Morocco aims at deriving more than 40 percent of its electrical capacity from renewable sources, strengthening both energy security and sustainability. By 2035, this is expected to grow to 52 percent, with LNG accounting for 23 percent of the total. The project's goals are to:

The gas-to-power project will rely on:

To attract foreign investment, Morocco has adopted a modern legal framework, conducive to the development of infrastructure projects.

The PPP Law is essential, because it introduces the concept of a partnership contract into the Moroccan legal framework, thereby enabling private partners to be remunerated by the relevant public authority while taking into consideration standard markets that are implemented in international project finance.

By 2030, it is anticipated that gas will account for 23 percent of Morocco's installed electricity generation capacity and renewables (wind, solar and hydro) for another 52 percent.17

Gas-to-power projects are complex and face a few significant challenges, particularly in nations where these projects are the first of their kind

Gas-to-power projects are complex and face significant challenges, particularly in nations where these projects are the first of their kind.

The major challenges associated with gas-to-power projects in Africa relate to:

Receiving support from the state will be essential for managing risks associated with the state’s participation in the project.

To avoid or respond to the aforementioned risks and other key challenges, particular attention should be paid to contractual frameworks, tariff structures, government support, financing frameworks, fuel flexibility and corporate social responsibility (CSR).

Given the broad range of stakeholders involved with gas-to-power projects, it is important to adapt the usual forms of contracts to each project, especially with regards to the following provisions:

Establishing an effective tariff structure is particularly important for managing foreign exchange risks. The tariff structure should be largely cost-effective and should be able to support the project funding. The manner in which foreign currency costs are passed through under the Power Purchase Agreement (PPA) should be a key area of focus:

Receiving state support will be essential for managing risks associated with the state's participation in the project. Both the nature and extent of a government's involvement will be of major importance in the gas-to-power project's success.

Establishing a strong financial framework is important for limiting currency and sovereign risks and for hedging general project risks.

Financing the gas-to-power project will involve a typical suite of finance agreements. Depending on the final corporate structure and financing terms, on-loan agreements and cross-guarantees by each of the project companies (if several) may be required.

With new discoveries of natural gas in Africa, large projects could be developed in several parts of the continent, including cross-border and remote areas. States and private developers will therefore need to work together to develop projects onsite. This will also mean achieving a fair split of the costs, risks and benefits. Despite these significant challenges, the future seems bright for African LNG, as gas-to-power projects are likely to expand due to strong demographic growth and an ever-increasing demand for electricity.