While investors are looking at a variety of sectors in the region, our survey reveals that roads are the top priority, while both conventional and renewable energy are still very much on the radar

Our research shows that transportation (in particular, roads) and energy (both conventional and renewable) are the top priorities for investors. These findings tally with figures from Inframation Group on the sectoral direction of infrastructure M&A in the APAC region in the past two years. In deal value terms, transport captured 32 per cent of the market in 2018 (up from 29 per cent in 2017), while renewables took 28 per cent in 2018. The volume figures are reversed with renewables on a 51 per cent market share last year, followed by transport with 22 per cent.

The necessity for road investment was spelled out in a May 2018 report from the Asian Infrastructure Investment Bank (AIIB) which stated that ’Investment across the region is expected to be focused on road infrastructure, which comprises nearly 70 per cent of total estimated required investment.’ The dominance of road transportation is borne out by figures from the AIIB report, which estimate that the share of journeys by road will be 70 per cent (compared to 19 per cent by rail and 11 per cent by air) in 2030.

Notable major road projects presenting opportunities for investment include the 600-km-long Ganga Expressway in India. That is just one project on an expansive list of road schemes planned across the APAC region. In the Philippines, the US$500 million Mindanao Road Project has been backed with loans from the ADB, while Australia has its own large-scale road construction plans including the WestConnex Toll Road in Sydney and the North East Link in Victoria.

Roads are not the only transportation infrastructure sector that respondents are prioritising—40 per cent state that they are planning to invest in rail in 2019. The profile of rail transportation as an investment opportunity was highlighted by the choices that respondents made when asked to name, unprompted, Asia-Pacific infrastructure projects likely to get off the ground this year—the top-six selections were all rail projects.

plan to invest in roads

Energy, both conventional and renewable, is also a major draw for infrastructure investors in the region. According to GlobalData Energy, approximately 130 new oil & gas production facilities are expected to enter operation across the APAC region by 2025. India will account for the most with 62 projects, followed by China with 20. Indonesia, Vietnam and Malaysia are expected to each develop between ten and 15 projects.

Fifty-six per cent of respondents are likely to invest in energy transmission, while 55 per cent are looking toward conventional energy generation. These figures rise when we examine specific regions—73 per cent plan to invest in transmission in Singapore, while 64 per cent expect to commit funds to conventional energy in South Korea. High levels of inward energy investment across APAC countries reinforce a view that many countries are looking to reduce their oil & gas imports. Homegrown power projects promise greater independence, as well as both the economic and political security that comes with being more self-sufficient. 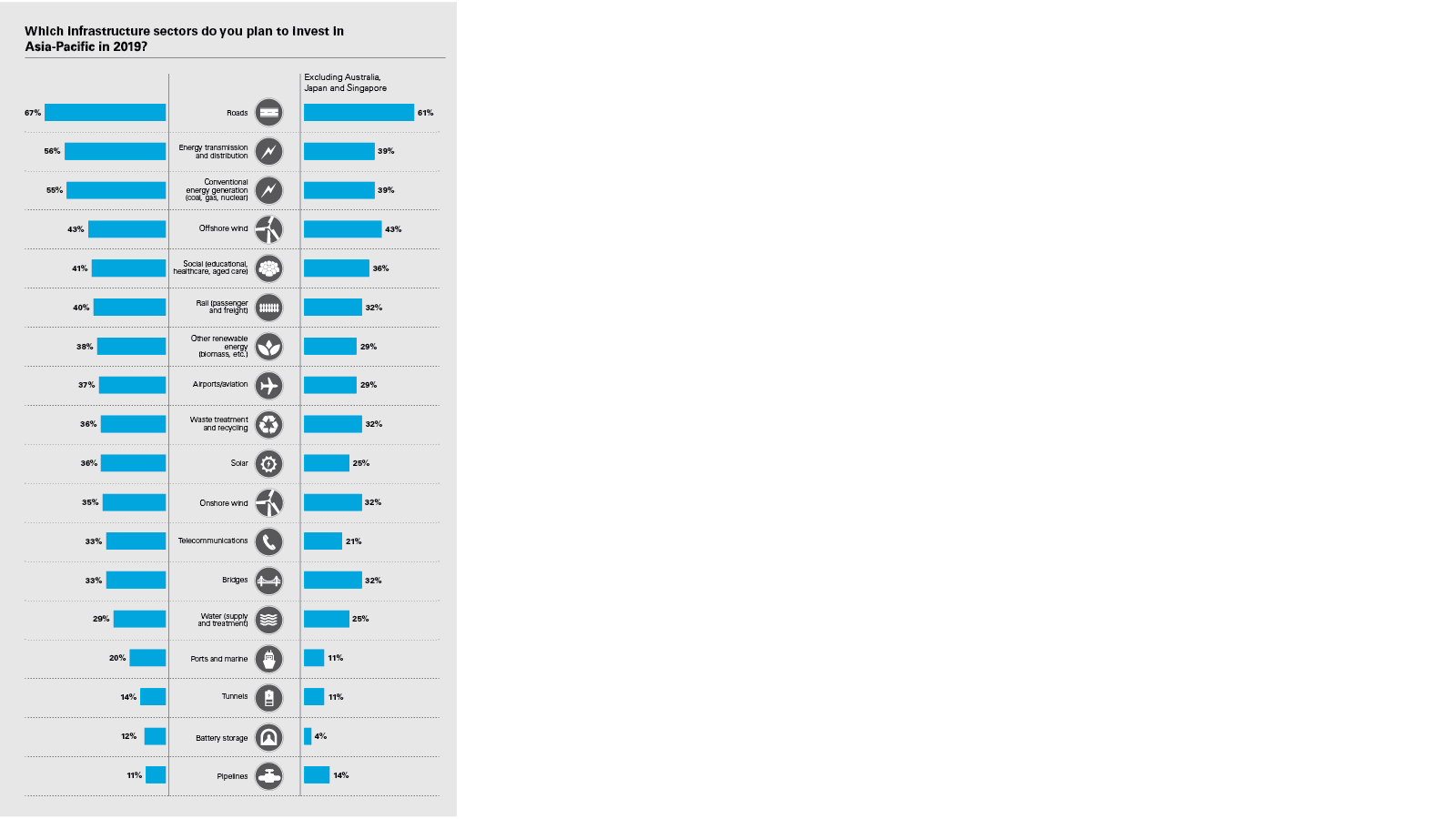 Meanwhile, renewable energy continues its growth in the region. According to the International Renewable Energy Agency’s Renewable Capacity Statistics 2018, Asia accounted for nearly two-thirds of the world’s new renewable capacity in 2017. The region was also the fastest-growing area, achieving growth of 13 per cent.

Our research suggests that offshore wind is set to remain a key part of investors’ portfolios. If we take Australia, Japan and Singapore out of the equation, then offshore wind leapfrogs over conventional energy into second place in the ranking of sectors. Across the whole APAC region, 43 per cent of respondents have plans to invest in offshore wind projects. Major offshore (and onshore) wind projects have emerged in Taiwan, South Korea and Japan.

Momentum continues to build in renewables—79 per cent of our respondents cite relatively low capital costs as a major attraction for investment, and costs are decreasing as the volume of projects builds and the technology matures. There are, of course, environmental reasons for developing green forms of energy, which are clearly now looked upon favourably by investors: ’Renewable energy projects are a great value add and clearly indicate the seriousness of governments towards sustainable development. If a country is able to develop it, this shows a considerable amount of sophistication,’ explains the director of one US investment fund.

This snowball effect indicates further progression for offshore wind and other renewable energy schemes. And gathering momentum in renewables also means more demand for supporting infrastructure. An overwhelming 92 per cent of our respondents agree that financial close being reached on a significant number of renewable energy projects in 2018 will have a positive influence on bringing other infrastructure schemes to fruition this year.

An example of this influence can be seen with port developments. A fifth of the investors we surveyed plan to inject funds into new ports and marine expansion schemes this year. Investment in ports can be seen to have resulted partly from the boom in renewable energy— offshore wind projects demand a certain amount of service and heavy engineering support from nearby port infrastructure.

Despite the enthusiasm for renewable energy, it is not without its challenges. Firstly, a great deal of the existing grid infrastructure in some APAC countries is not necessarily equipped to deal with renewable projects and this introduces challenges in terms of delivering power to its desired destination.

Where they can deliver, there are other technological risks—just over half of our survey respondents agree that technology presents greater risk in renewable energy schemes compared to other projects. This is, at least in part, believed to be a reflection of the likelihood of technology changing during project life cycles. In a related issue, there may also be the risk of supply issues because, in a number of countries, there are only a limited number of contractors that are experienced enough to deliver these projects.

As project managers and investors become more comfortable with the development of technology, and as costs begin to come down, the efficiency that it can bring should more than outweigh the risks. 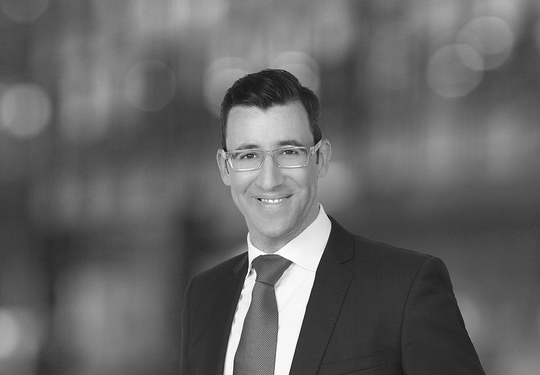