Somewhere over Africa: When eurobonds and high yield bonds meet

New issuers and investors are driving growth and change in Africa's debt markets.

In 2015, two simultaneous market trends are developing across emerging markets:

Financing options for corporates, banks and sovereigns are expanding as international markets, and their related products and investor bases, continue to grow and develop. One geography that provides an interesting case study on the impact of competing capital markets solutions is developing Africa, where  resource-based financing, strong regulatory initiatives to promote international fund-raising and other developments have created a positive environment for new debt issuance. 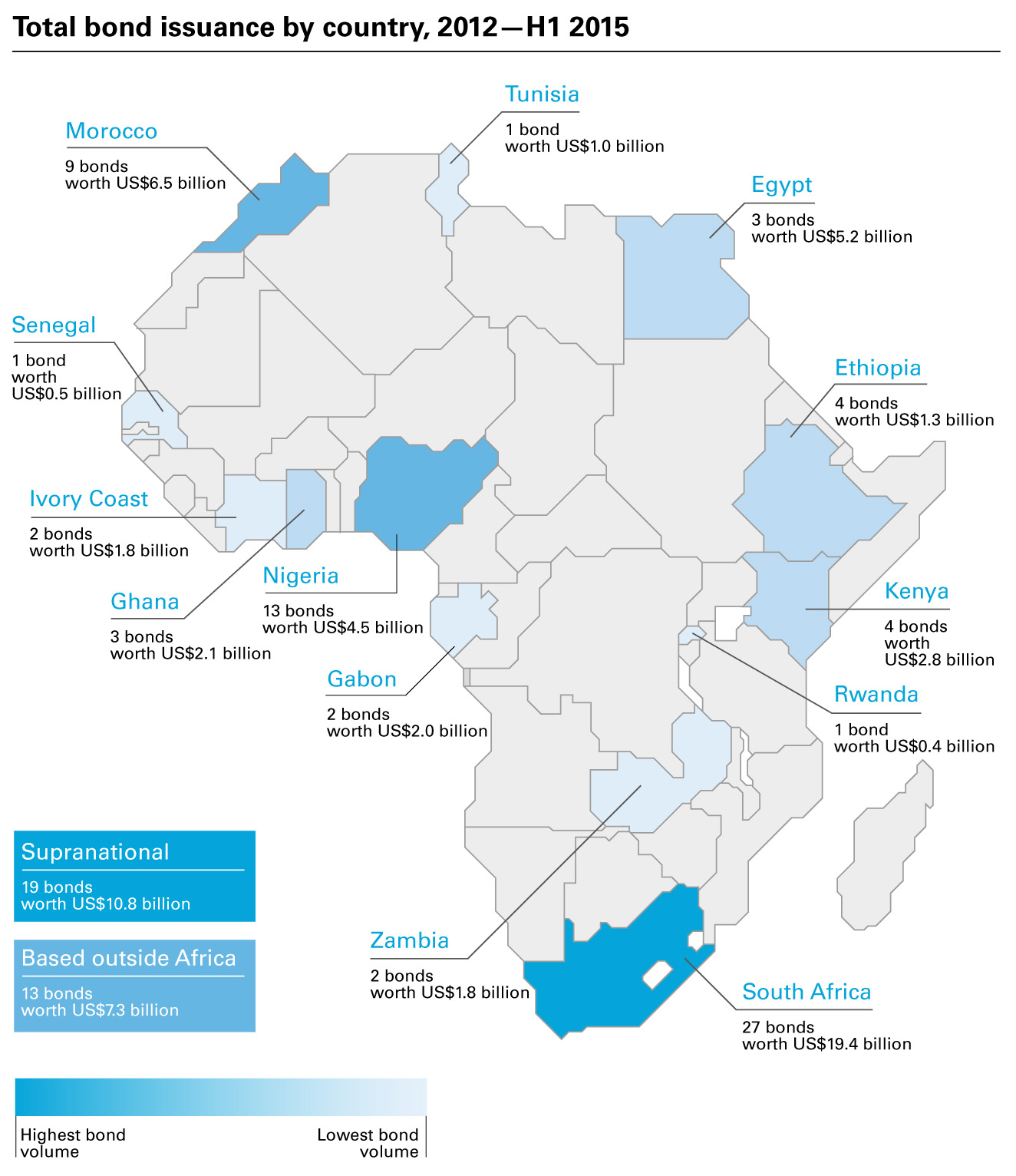 In this market, the use of both classic European eurobond structures and US high yield structures, as well as the resulting combinations, have made the market more dynamic and expansive, to provide greater flexibility for borrowers. This in turn is providing new financing alternatives to corporates, banks and other issuers while ensuring the right level of protection for investors.

The internationalisation of the African financial markets

For Africa, like other emerging global markets, internationalisation has come with the offer of new financing alternatives across a broad range of geographies and industries. It would be an oversimplification to try to draw too many general conclusions, given the wide range of cultural and geo­political influences, and the varying stages of economic development across the continent. However, the African capital markets have followed the trend of other international markets. At first, issuances were limited to sovereign or sovereign-linked entities (with express or implied government backing). They were followed by financial institutions with established credit profiles coming to market. Now, the bond market has progressed to include a more diverse set of corporates, as the market becomes more developed and familiar to institutional investors. Increasingly, high yield bond investors who continue to search for new investment and yield opportunities are being attracted to emerging markets, including Africa.

In sub-Saharan Africa, steady growth in both aggregate bond volume and value were seen between 2012 and 2014 (see graph)—even if this tailed off somewhat in the first half of 2015. During the third-quarter, additional African sovereigns have signalled their intentions to issue on the eurobond market—Ghana closed a deal with a partial guarantee from the International Development Association arm of the World Bank.

Like the CEE, CIS, Asia and Latin America before it, Africa is the latest frontier for investors seeking new opportunities for diversification and enhanced fixed-income returns reflecting new market risk and other uncertainties.

Developing infrastructure and greater political stability are encouraging both investors and borrowers. At the same time, new capital retention requirements on banks and other lenders, tighter banking regulation and reducing risk profiles of legacy bank lenders have combined to kick-start the growth of African capital markets as a preferred source of capital. Despite the recent crash in oil prices and the end of the 'commodities super-cycle'—which has hit iron, coal and platinum as well as numerous other hard and soft commodities—Africa is providing an opportunity to a new, diverse capital markets investor less likely to be put off by macro-uncertainties than traditional lenders.

Issuers across sectors and jurisdictions are taking advantage of the maturing market. In July 2014, telecoms operator Helios Towers' Nigerian subsidiary became the first corporate in the country outside the oil and banking sectors to issue a bond, setting a standard for other non-sovereigns to follow.

While all sectors seem positioned for capital markets growth, natural resources and telecoms have the potential to lead the expansion in the corporate space, although the recent Afren situation has led to more scrutiny of the downside risk of these investments, in particular regarding relative positions in the capital structure, the ability to take efficient enforcement actions and the untested nature of complex capital structures in emerging markets.

Now, one of the biggest questions, given all these competing factors, is how will sub-Saharan Africa's incipient cross-border bond market develop in 2015 and beyond?

In any capital markets financing, the key challenge to a successful transaction is to strike the right balance between supporting the issuer's need for ongoing flexibility to run and grow its business, while providing investors with proper protections to preserve their investments.

Issuers, particularly in newly developed or developing markets, often have to choose between products, and/or features of a particular product, and legal considerations such as choice of governing law.

The choice between eurobonds and high yield bonds, and the resulting hybrid products that reflect aspects of both, derives in part from the historical development of each product. Generally:

High yield bonds have been widely included as part of the capital structure in the United States since the early 1980s, but were really only adopted as an international mainstream source of funding following the Lehman collapse. Thus, arguments for continued New York law governance of international high yield bonds include the fact that they are more thoroughly court-tested in New York and, for certain high yield investors located in the United States, there is a preference for New York law.

Eurobonds have long been the mainstay of capital markets internationally. While eurobonds typically assume a strong credit rating or risk profile (i.e., are comparable to investment-grade debt securities in the United States) or a sovereign or sovereign-link credit support, they have developed outside the constraints of the US securities market and thus provide more flexibility in a number of aspects over more US-centric models.

Sovereign issuances (which typically take the form of English law eurobonds) still make up a substantial portion of the African issuances. Between 2012 and the end of the first half of this year, 25 bonds governed by English law were sold to investors, compared with 5 governed by New York law.

of African bonds issued governed by English law in 2014

Countries such as Nigeria and Ghana, the most prolific sub- Saharan bond issuers outside South Africa, have a common law system adopted from the UK based on historical participation in the British Commonwealth. While the choice of English law for the typical sovereign issuance is likely driven more by the choice of the classic eurobond format for their issuances, certain sovereigns looking to raise international finance who operate under common law may be more familiar with bonds governed by English law.

One of the key drivers of capital markets growth has been the mass privatisation of the energy and power sectors. In Nigeria, the first phase of the energy sector's reorganisation saw the break­up of the government-owned Power Holding Company of Nigeria into six separate generation companies and 11 distribution groups, which were sold off to private owners in a US$2.5 billion deal that concluded in November 2013.

The indigenisation of Nigeria's oil & gas industry—where international oil majors have exited the sector, to be replaced by local, Nigerian-run and Nigerian-owned oil exploration and production companies has also created a massive funding event for African bankers. These bankers have turned to the international bond and loan markets to raise the financing to underwrite the reorganisation of the sector.

This new reality is part of Nigeria's 'Vision 20:2020,' a deregulation and investment plan intending to propel the country into becoming a global and regional economic leader in the next five years. It partly explains why energy and power companies, and the banks looking to finance their capital requirements, have been turning to bond markets for financing. Of the 74 bonds sold by non-sovereigns between 2012 and the first half of 2015, 45 were issued by the energy and financial services sectors.

While all transactions have unique features, the following outlines some of the general structural differences between international eurobonds and high yield bonds.

Sovereign ratings, which often form a benchmark for a corporate or other non-sovereign rating in the relevant jurisdiction, are often lower in Africa than in more developed markets. This can lead to a corporate being penalised compared to similarly performing companies in more established jurisdictions and further blurring historical distinctions between eurobonds and high yield bonds.

Traditional investor bases are different. The target investor base is often a key factor in the choice between structures.

Also, generally, high yield bonds are designed to co-exist with other secured and unsecured debt in a capital structure. Many provisions of a high yield covenant package relate to the interplay with other debt. One interesting example relates to establishing intercreditor arrangements when secured bonds are added into a structure with eurobonds. The traditional negative pledge does not give guidance on how to establish intercreditor principles that will require the eurobond trustee's participation. This situation provides an example of where hybrid elements (i.e., including intercreditor provisions in eurobonds) would be beneficial to deal structure and future flexibility.

Until now, sub-Saharan Africa has favored bonds issued under English law, but that is chiefly because sovereigns and banks, which rely on the traditional Eurobond structures, have been the highest-volume issuers. Corporates in other sectors, meanwhile, are edging toward high yield structures governed by New York (of the 41bonds issued by corporates outside the financial sector between 2012and H1 2015, 28 were governed by New York law).

Which sectors develop in the short term depends on a number of internal and external factors: the rise of tech and economic diversification of many African states; the implications of sinking commodity prices (in particular last year's dramatic fall in oil prices); energy needs; and import/ export opportunities, all in the context of evolving world events. These factors will make this a particularly interesting part of the world to watch in 2015 and beyond.

2015 and beyond: Variations on a theme

Several factors, including economic uncertainty, the volatility of natural resources prices, the general slowdown in the international financial markets and other geo­political concerns, have impacted capital markets issuances in 2015, both in Africa and elsewhere.

This trend is not surprising given the historical cyclicality of international capital markets, but signs for the future look more favourable. Capital markets transactions are expected to continue to grow as a percentage of overall financing, and in Africa, continued openness to international investment and now established capital markets in many jurisdictions bode favourably for market resilience.

Also, as market participants weigh the pros and cons of eurobonds and high yield bonds, we expect circumstances will lead to the continued development of the "hybrid" market, which takes into consideration aspects of both eurobonds and high yield bonds. We anticipate that the market could also see bonds with additional credit enhancements, some of which may prove unique to the African market, including multilateral bank guarantees (i.e. Ghana), sinking fund or amortisation schedules, new put or call arrangements or interest rate ratchets, or financings priced on the value of forward contracts or forward deliverables or similar growth metrics. 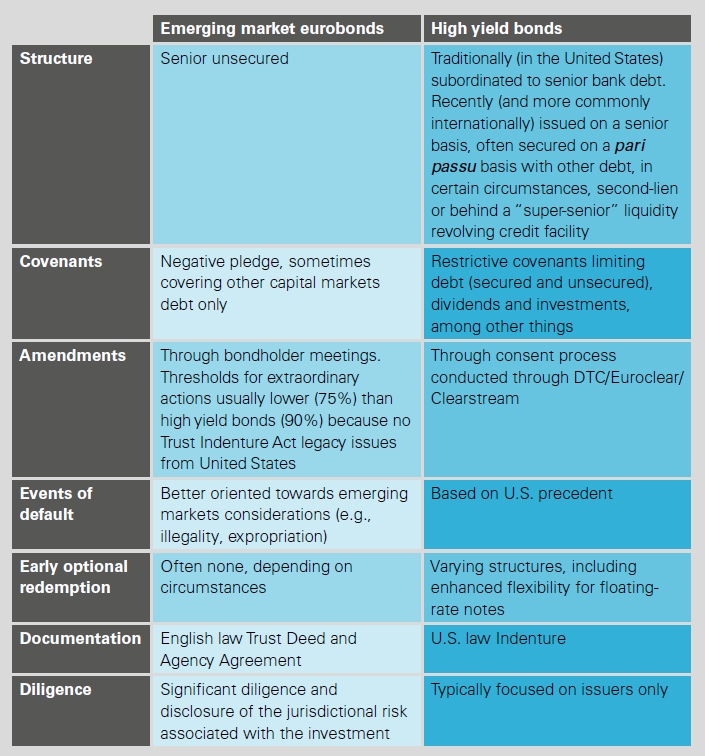 Somewhere over Africa: Where Eurobonds and high yield bonds meet
Thursday, 22 October 2015 | White & Case, London
Our panel will discuss the changing landscape for financing in Africa.