A global leader in offshore wind power capacity, the UK has seen rapid expansion in the sector

Government policy and strong investor interest have resulted in robust growth in the development of offshore wind farms in the UK. According to the industry association Wind Europe, between 2010 and 2017 the UK attracted 48 percent of new offshore wind investments in Europe, worth a total of approximately €40 billion. The latest data from Renewable UK indicates that as of March 2019, there were 36 operational offshore wind projects in the UK, composed of 1,932 turbines and representing approximately 7,895 MWs of power.

Depending on the jurisdiction and the size of the wind farm, the planning application process to obtain development consent varies.

The main pieces of legislation for the construction and operation of offshore wind farms in England, Scotland and Wales are the Electricity Act 1989 (Electricity Act), the Planning Act 2008 (Planning Act), the Marine and Coastal Access Act 2009 (Marine and Coastal Access Act) and the Marine (Scotland) Act 2010. There are currently no offshore windfarms in UK waters off the coast of Northern Ireland.

Under the Planning Act, any offshore wind power project in England and Wales with more than 100 MWs of capacity is classified as a Nationally Significant Infrastructure Project (NSIP) and requires a Development Consent Order (DCO) from the Secretary of State (or the Welsh Ministers for projects in Wales). Projects with less than 100 MWs of capacity must obtain consent under section 36 of the Electricity Act ("s.36 Consent"). In English waters, the consent is granted by the Marine Management Organisation (MMO).

In Scotland, all wind farms in excess of 20 MWs are considered major developments and must be approved by the Scottish Ministers and granted an s.36 Consent.

Leases from the Crown Estate

Depending on the location of the proposed installation, a marine license granted by the MMO, Marine Scotland or Natural Resources Wales, is also required under the Marine and Coastal Act for the installation of offshore wind farm cabling to connect the project to the electricity grid.

IMPACTS TO SEA ANIMALS AND BIRDS

For large offshore wind projects, an Environmental Impact Assessment (EIA) is required, unless the relevant authority (e.g., the Secretary of State in England) grants an exemption. An EIA assesses all potential environmental impacts of a project during construction, operation and decommissioning, and any associated mitigation measures.

Consultation bodies (such as Natural England), members of the public and interested third parties have the right to submit representations about any potential environmental impacts, which the planning authority must consider.

For marine areas in the UK, the Conservation of Offshore Marine Habitats and Species Regulations 2017 (OMHSR) implements the EU Habitats Directive (92/43/EEC) and the EU Birds Directive (2009/147/EC). These directives require the designation of Special Areas of Conservation (SAC) for the protection of certain habitats and species, and Special Protection Areas (SPA) for the protection of certain wild bird species. Offshore marine SACs and SPAs are known as European Marine Sites.

The OMHSR requires the Secretary of State, the UK nature conservation bodies and the relevant competent authority to make an "appropriate assessment" of a project's implications on European Marine Sites or a marine conservation zone prior to granting any planning consents. In the UK, the appropriate assessment would be a Habitats Regulations Assessment (HRA). The Secretary of State may only grant consent to an offshore wind project if it has ascertained that the integrity of a European Marine Site will not be adversely affected. The only exception is where there are no alternatives to the project and there are "imperative reasons of overriding public interest."

In addition, a marine wildlife license may also be required under the Conservation of Offshore Marine Habitats and Species Regulations 2017 for any activity that disturbs or harms species protected under the EU Habitats Directive, known as European Protected Species ("Protected Species"). Animals protected under this legislation in UK waters include certain species of whales, dolphins, porpoises, turtles and the Atlantic sturgeon. The licenses are issued by the MMO (for England and offshore waters), Scottish Natural Heritage or Natural Resources Wales, as applicable. These are generally granted as a last resort, as the relevant authority will normally try to include appropriate mitigation measures within the construction and/or operation license so that Protected Species are not adversely affected.

A marine wildlife license is only necessary if mitigation measures cannot remove or sufficiently reduce risks to Protected Species.

Based on past marine licenses granted by the MMO and UK government policy, mitigation measures that may be included in marine license conditions relate to:

a. Timing (e.g., restricting the period of time during which an activity may be undertaken, to avoid or reduce disturbance to marine animals)

b. Monitoring (post-consent monitoring is normally required to ensure that EIA and HRA predictions on impacts are correct, provide evidence on the effectiveness of mitigation measures and allow the identification of unforeseen impacts)

For a marine wildlife license to be granted, there must be no "satisfactory alternative" to the proposed project and the activities authorized must not be detrimental to achieving favorable conservation status of any Protected Species in its natural range.

The UK government has released interim advice on presenting assessment information on the effects of offshore wind farms on birds ("Assessment Advice"). The Assessment Advice gives detailed guidance on how to assess the impacts of an offshore installation on bird disturbance at the construction, operation and decommissioning stages. The assessment may also need to take collision risk modeling into account (e.g., in case birds are at risk of colliding with the rotating blades of wind turbines).

According to government policy, shutting down turbines during peak migration periods is unlikely to be suitable mitigation for migration corridors, as the timing of migration events is inherently uncertain. Mitigation measures for birds must therefore be tailored for each offshore wind project.

Impacts on marine animals and noise

The potential effects of construction and decommissioning activities on marine species, in particular marine mammals, is a key focus of the EIA for UK offshore wind farm projects.

Project developers must assess the likelihood that marine mammals and Protected Species will be adversely affected by construction and decommissioning at the EIA stage, and mitigation measures must be incorporated within the project's decommissioning plan. The National Policy Statement for Renewable Energy Infrastructure (Renewables NPS) requires assessments to contain a broad range of data, including information on marine mammal activities in the area, baseline noise levels, construction noise and operational noise.

Under the Renewables NPS, visual considerations are a key element of the NSIP planning decision process. Proposals for renewable energy infrastructure should demonstrate good design regarding changes to the landscape (i.e., from construction, operation and decommissioning) and effects on the visual amenity of the area from people's property and nearby public spaces. Other than where a wind farm is not visible from the shore, the developer must undertake a Seascape and Visual Impact Assessment (SVIA) as part of the EIA process to identify a site location with the least adverse visual impacts.

Developing SVIAs is an iterative process through which alternative sites and designs are proposed, assessed and amended. SVIAs identify preferred site and design options and assess the final proposal for predicted residual impacts on the seascape, in each case, balancing environmental, technical and economic considerations.

SVIAs are an important part of the planning process in the UK, and the Renewables NPS requires that the relevant authority (e.g., in England, the Secretary of State) must not refuse consent for a development solely on the grounds of adverse effects on the seascape or visual amenity unless:

a. An alternative layout within the identified site could be reasonably proposed that would minimize any harm, taking into account other constraints that the applicant has faced such as ecological effects, while maintaining safety or economic viability of the application or

b. The harmful effects are considered to outweigh the benefits of the proposed development

Impacts on visual amenity are given considerable weight in wind farm planning applications in the UK. For example, in 2015 the Secretary of State refused development consent for the Navitus Bay Wind Park. Despite the presumption in favor of granting development consent for certain kinds of energy NSIPs, the Secretary of State's decision letter goes into great detail concerning the effects of the project on seascape, landscape, visual amenity and protected areas in the vicinity of the proposed development, in particular the project's visibility along a 30-km stretch of the Dorset coast, which is a designated UNESCO World Heritage Site. 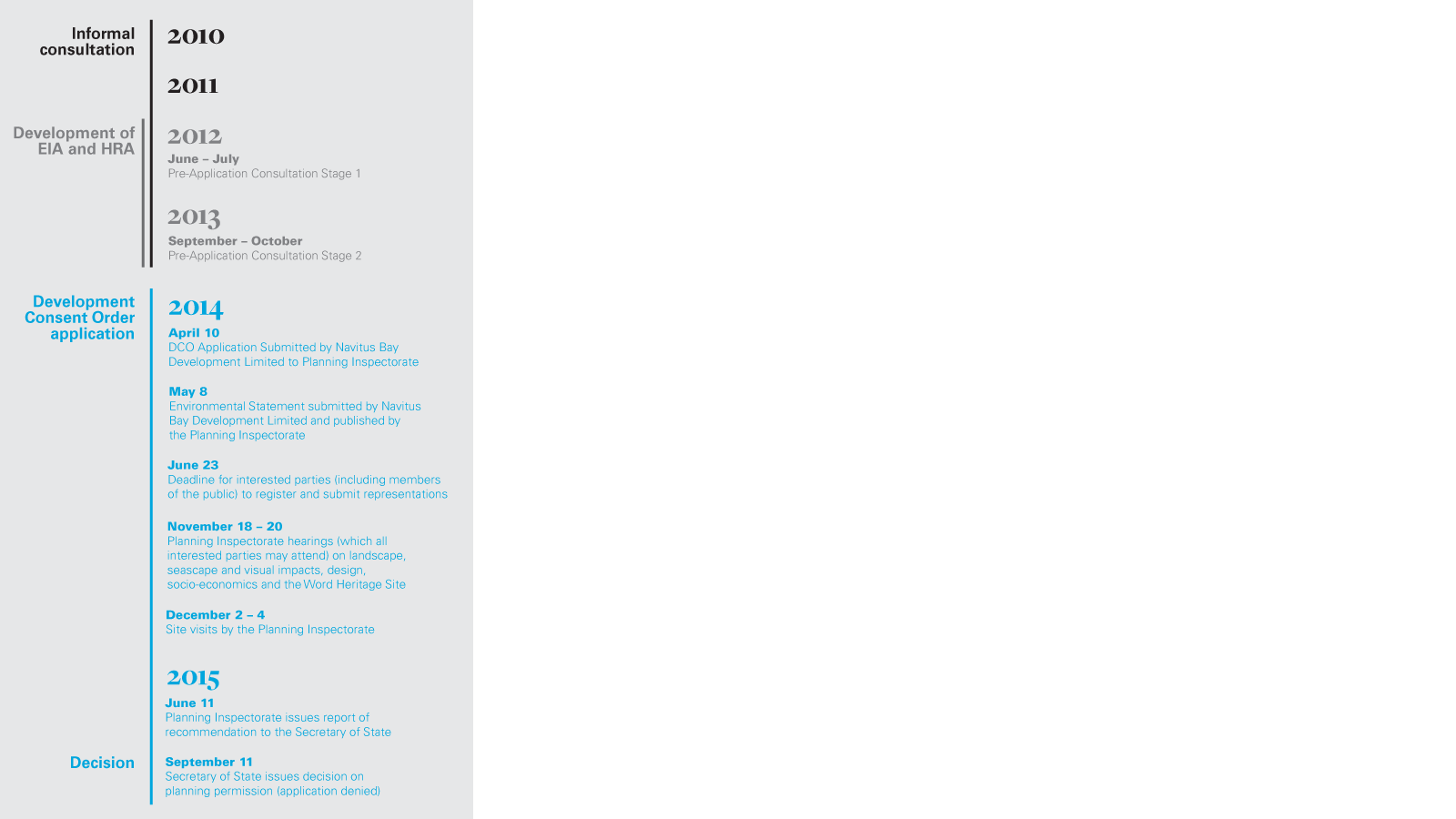 For NSIP projects, the DCO will typically prohibit the commencement of any development activities until a decommissioning program has been submitted in accordance with the Energy Act and approved by the relevant authority.

In addition to these requirements, the Crown Estate will always require the developer to reinstate the site at the end of its lease pursuant to its approved decommissioning program.

a. The installation could serve a new purpose (although the decommissioning program would still need to set out the eventual measures for when the reused installation becomes disused)

b. The entire removal would involve "extreme cost" (for instance, deep foundations)

c. Entire removal would involve an unacceptable risk to personnel or the environment or

d. The installation or structure weighs more than 4,000 tons in air or stands in more than 100 meters of water and could be left wholly or partially in place without causing unjustifiable interference with other uses of the sea.