When asked which country is most attractive to acquire companies from over the next 12 months, 77 percent chose the US, up from 67 percent last year.

On the one hand, the US economy has grown steadily, unemployment is down, interest rates remain low and the Trump administration’s tax cuts have given businesses across the board a material cash boost. Domestic deal activity has benefited, with value climbing 23 percent year-on-year in 2018.

Yet, as strong as the economic fundamentals appear, volatile stock markets, an escalating tariff war and a tougher regime for screening inbound investors have given dealmakers pause.

Although the Dow Jones Industrial Average and the S&P 500 both hit record highs in 2018, they have also suffered some of their biggest one-day falls since the financial crisis. Inbound deal value, meanwhile, has dropped by 10 percent. New powers granted to CFIUS, which could make it tougher for foreign entities to invest in certain industries, and the Trump administration’s imposition of tariffs on steel, aluminum and various Chinese imports have all weighed on investment into the US from abroad.

White & Case surveyed 200 US dealmakers to gauge how they assess the key deal drivers and dilemmas facing investors at this time.

Domestic bliss Dealmakers are upbeat about prospects for domestic dealmaking. They see positive economic signs on the horizon and, in the main, believe the economy will keep on growing.

When asked from which country it is the most attractive to acquire companies over the next 12 months, 77 percent chose the US, up from 67 percent last year. Only 6 percent say entering a new geography is the key driver for M&A.

"The US market has returned to growth and the level of uncertainty is minimal—apart from Trump’s policies,” says the chief financial officer of a US business services company. “The outlook for future economic growth looks stable, and we prefer to grow in our core domestic market. We see no value in venturing into foreign markets at this time."

The reason most commonly cited for their country choice was positive economic indicators. When asked about what will happen to US GDP in 2019 compared to 2018, 80 percent predicted moderate growth, 20 percent said there will be no change, and no respondents predicted a slowdown. When asked about the rate of growth in 2020 compared to the rate of growth in 2018, 17 percent say 2020 will see rapid growth, 76 percent say moderate growth and just 7 percent say there will be no change. Again, no one predicted a slowdown.

Despite the solid performance of the US economy over the last year, it is somewhat surprising that respondents weren’t more concerned that the economic cycle could be peaking. Although large strategic buyers are flush with cash and eager to deploy it into acquisitions, there is growing concern among them that there may be a downturn in the near future. 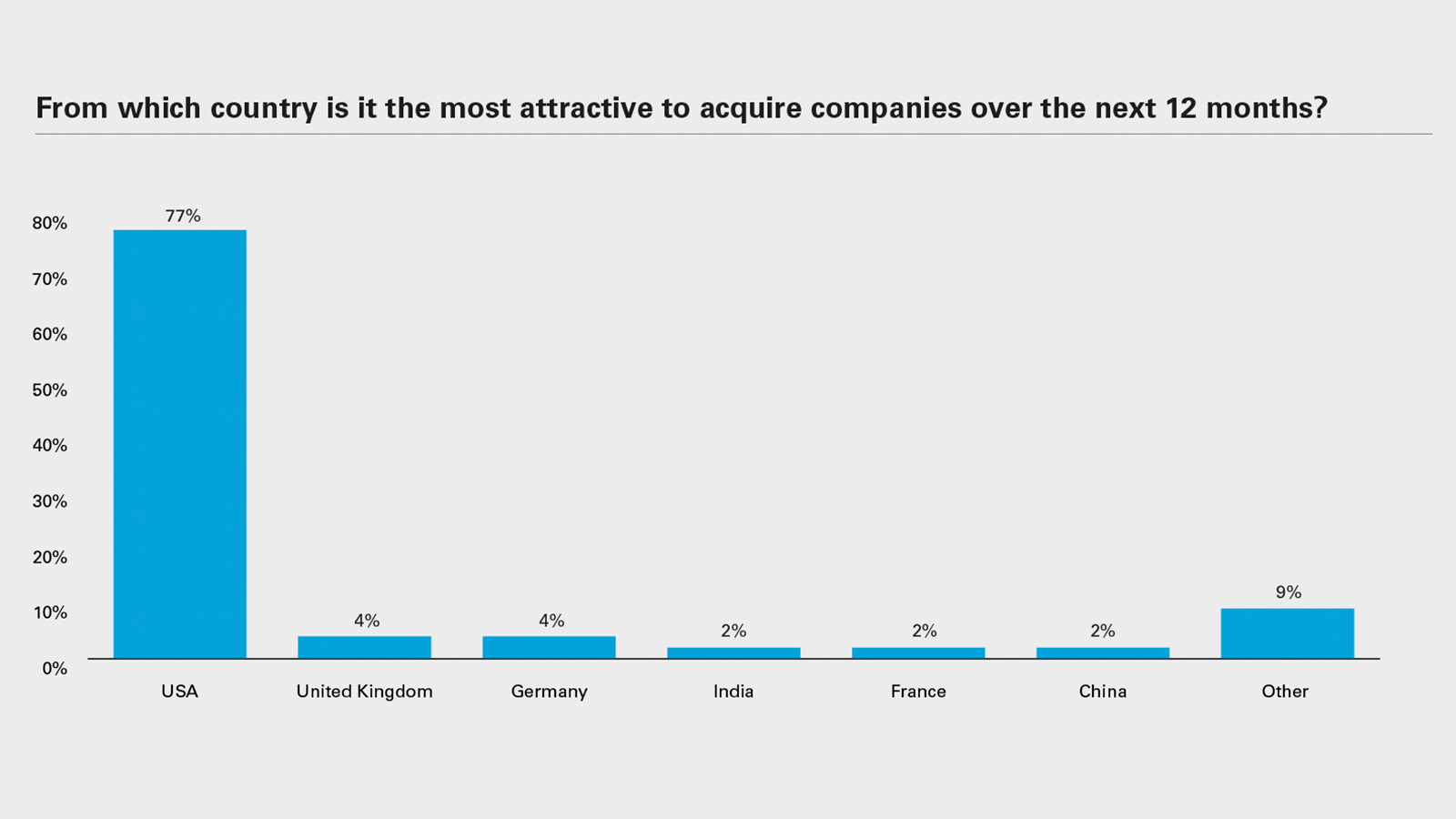 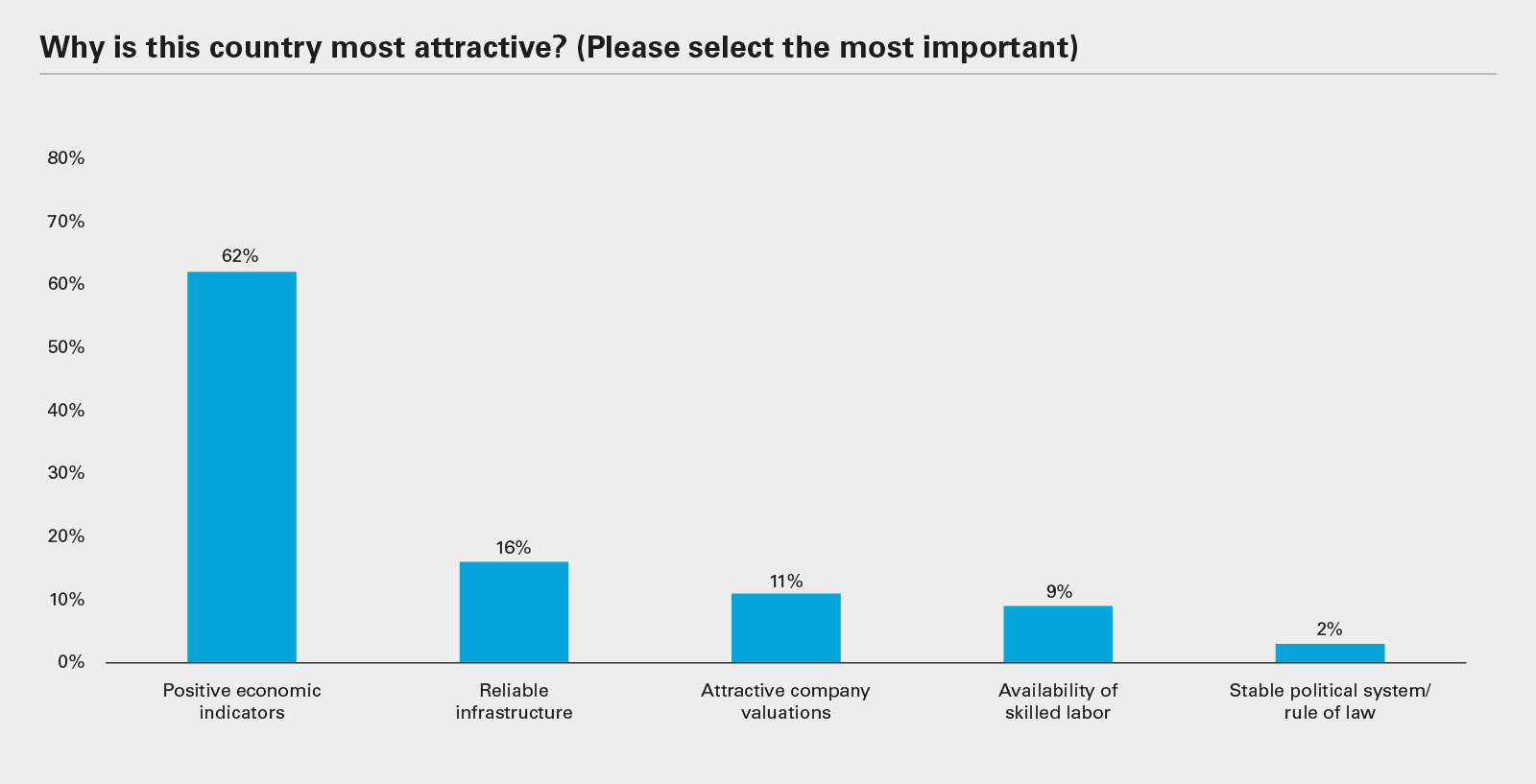 The lower corporate tax rate has allowed companies to retain more earnings, which they have been able to deploy into acquisitions.

The Trump administration’s tax reforms have been welcomed by M&A practitioners, with dealmakers saying that the tax changes have increased their confidence to pursue M&A.

The lower corporate tax rate has allowed companies to retain more earnings, which they have been able to deploy into acquisitions. The immediate deductibility of certain hard assets included in transactions has made M&A even more attractive for some companies.

Almost all of the respondents (94 percent) say the reduction in the rate of corporation tax from 35 percent to 21 percent has increased their company’s appetite for M&A, with 38 percent saying the tax breaks have significantly increased deal appetite.

When it comes to the introduction of a one-off tax on all repatriated non-US earnings, some 37 percent say this has increased their appetite for M&A, while 50 percent say it has had no impact and 13 percent say it decreased their appetite. Interestingly, 5 percent see tax savings as the primary driver for M&A activity. Although these respondents represent only a small proportion of those polled, they do illustrate the extent to which the Trump tax cuts have freed up capital for deals.

"Low tax rates will have a significant positive impact on the overall economy and we will see growth in new investment, employment and wages. Positive sentiments in the market give us confidence to execute our acquisition plans," an executive vice president at a TMT business says.

The tax cuts put more money into the economy and may have helped boost stock market valuations. Yet, their effect on M&A may be more limited. The lower rates are unlikely to have made a dramatic impact on valuations in M&A—the market was already operating in a competitive market with high multiples, even before the cuts came into effect.

Tech and IP are prized

Technology and IP are cited as the main reasons for pursuing a deal, and are expected to remain major drivers for dealmaking over the next 12 months. A quarter of respondents see it as their key deal driver—the same proportion as in last year’s survey.

"As long as new technologies continue to disrupt entire markets, acquiring new technology and expertise will be a top reason for us to engage in acquisitions so that we can defend our market position and stay ahead of the curve," says acorporate development director at a TMT company.

Revenue synergies and diversifying products or services were the next most popular deal drivers, each polling at 20 percent.

"If we are to meet the new product demands of customers, we can’t only rely on internal or organic development of new products. Developing new products is time consuming and not always suitable in the current competitive market," says the head of corporate development at a consumer company.

A key to growth

When asked how much M&A has driven average annual growth in the previous three years, 66 percent say it has driven 3 to 4 percent growth.

The positive sentiment towards M&A that emerged in the survey can also be explained by the fact that all respondents have seen the benefits of deals done in recent years.

When asked how much M&A has driven average annual growth in the previous three years, 32 percent say it has driven 1 to 2 percent of growth (compared to 38 percent of respondents in last year’s survey); 66 percent say it has driven growth of 3 to 4 percent (compared to 51 percent who said this last year); and 2 percent put the total at 5 percent or more (down from 7 percent in last year’s survey). No respondents say M&A has had a negative impact on growth or that it has not driven growth at all.

Although the outlook is less certain, the fundamentals remain the same. The reasons for undertaking M&A—to grow, to expand your customer base and geography and to increase more intellectual capital—continue to drive deal activity. 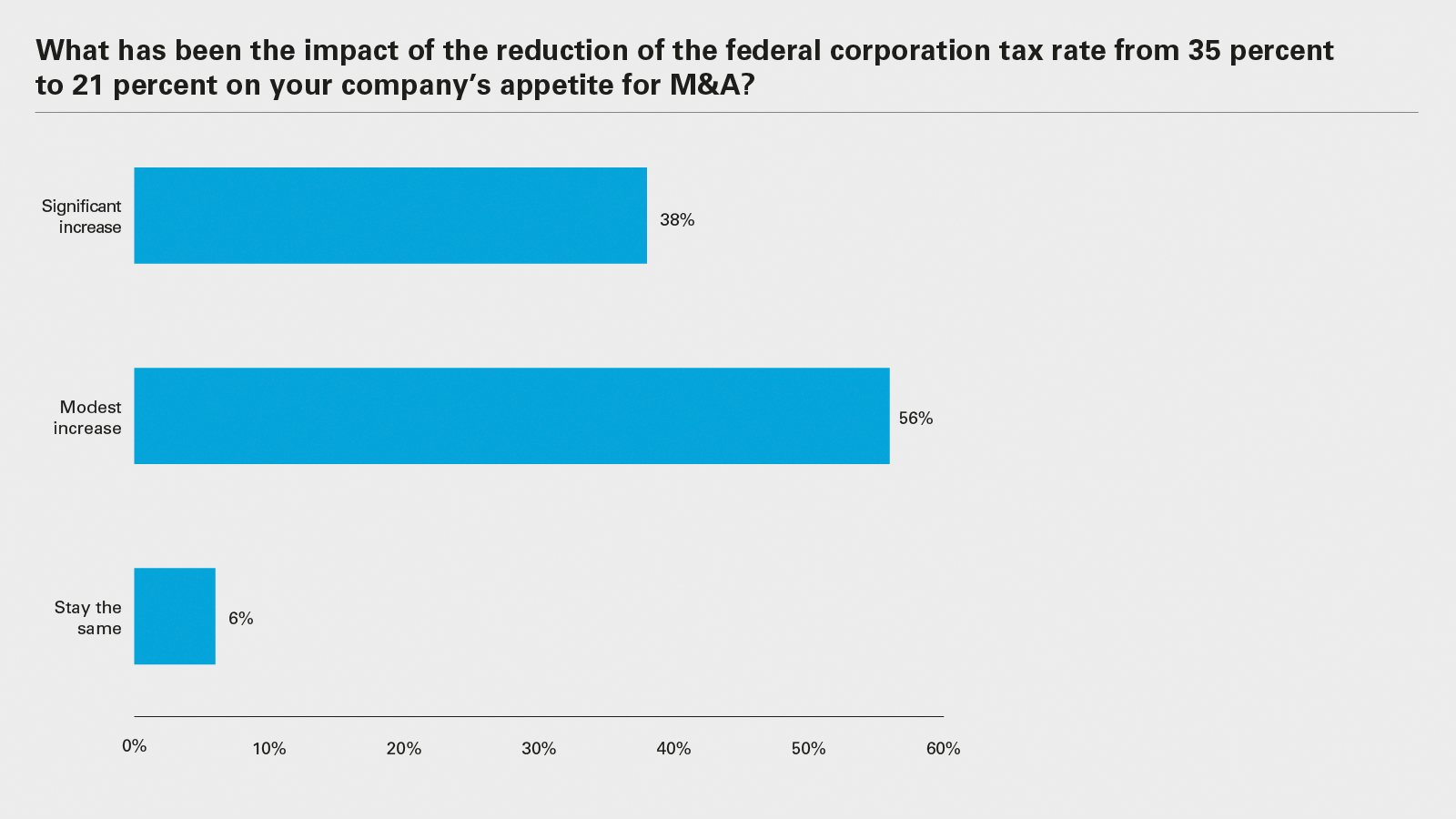 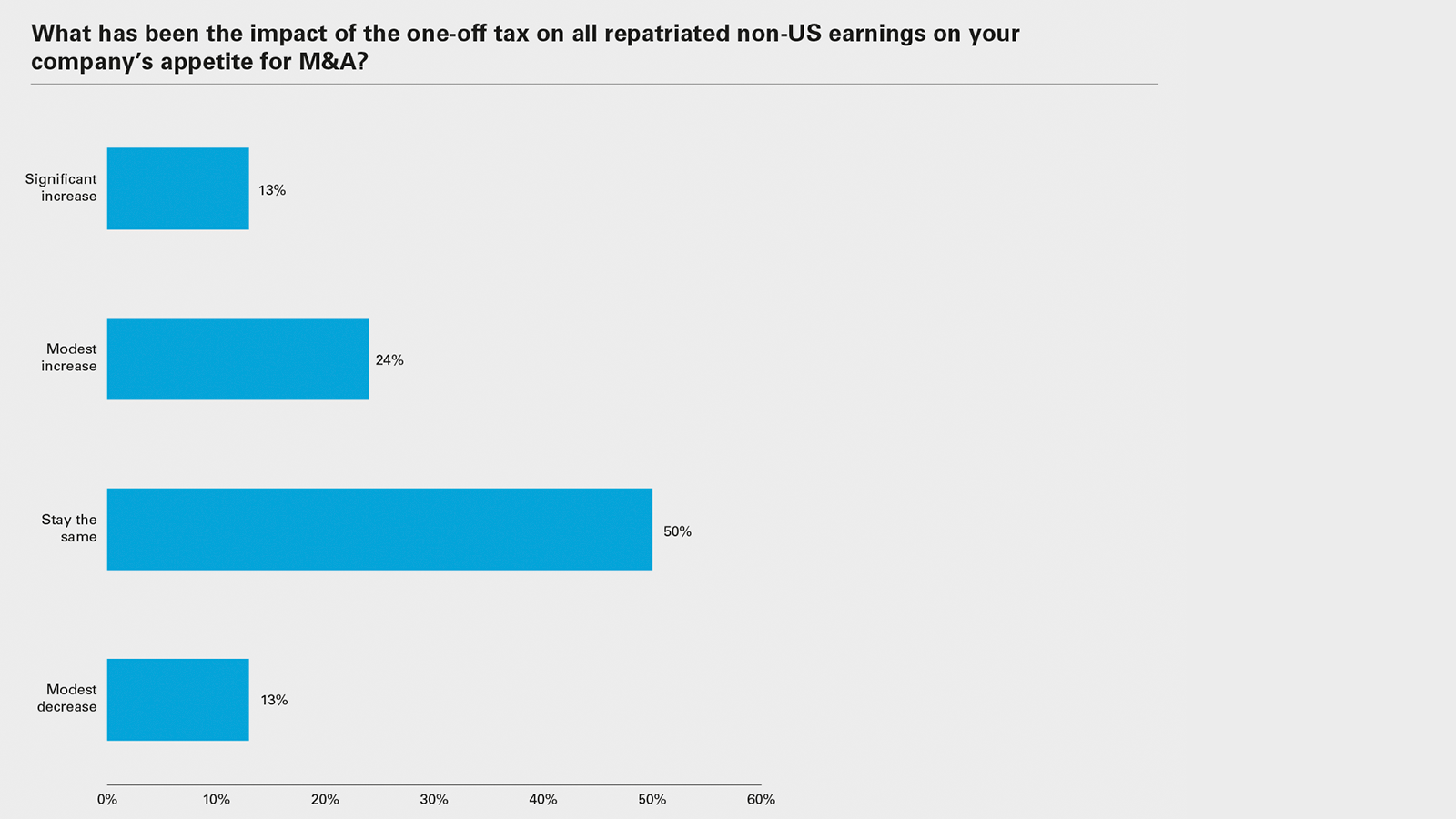 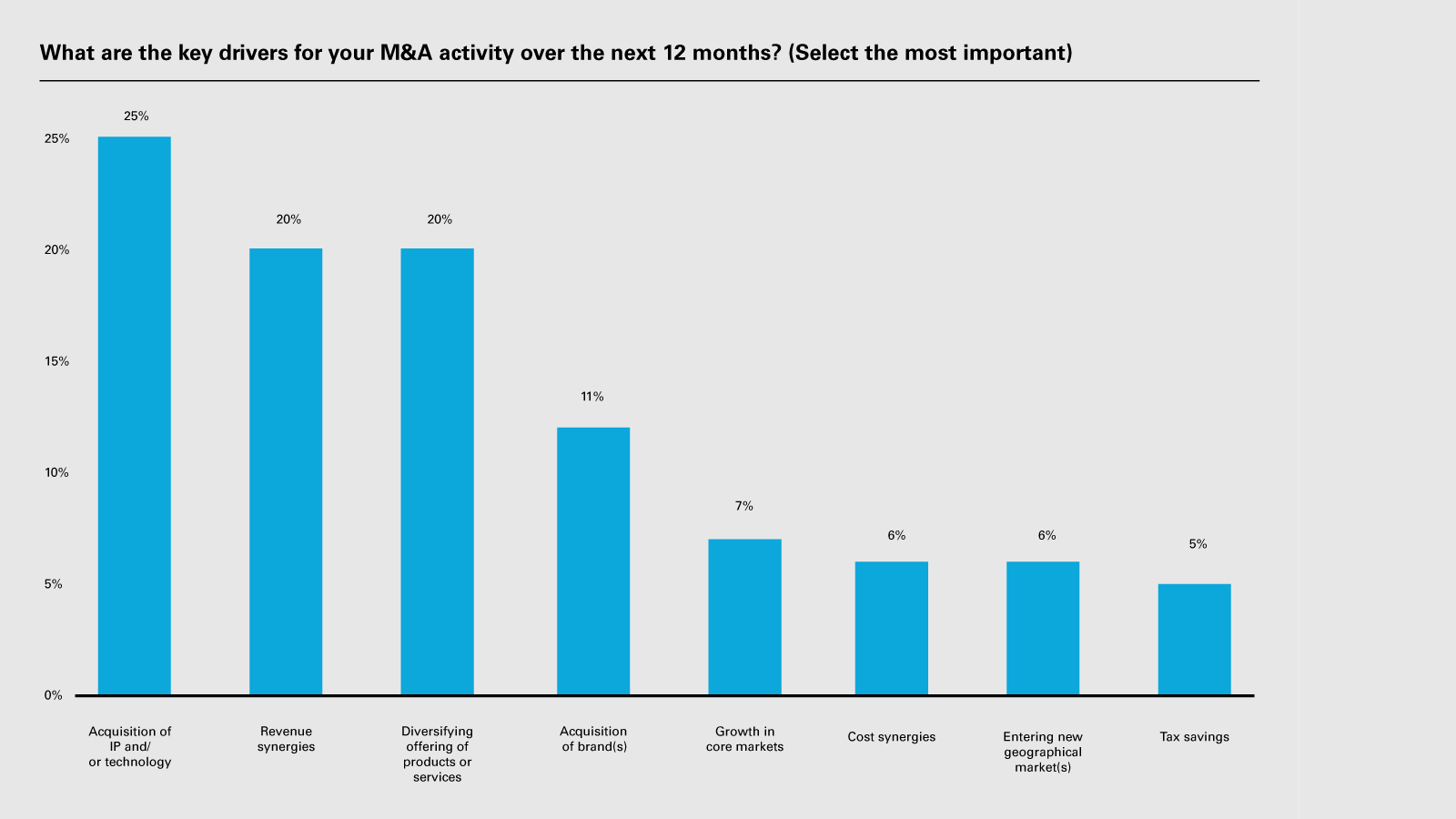 Although a majority of respondents say more tariffs on China will have no impact on their businesses, more than a third say an escalating tariff war could cause a downturn in the market.

Of those surveyed, 66 percent say tariffs would have no effect on their company’s appetite for M&A, but 34 percent say it would decrease their appetite.

"Considering the hardline approach of Trump, we were expecting the new tariffs, so we had prepared our business already. We had to be proactive, as we could have faced supply and operational issues. These are political and business scenarios we always prepare for. I don’t think we will restrict our strategic activities because of the tariffs," an executive at a US consumer business says.

For any decent-sized cross-border transaction, the future of trade relations will have significant consequences. However, for middle-market transactions, the increases in tariffs will not have as much of an impact. 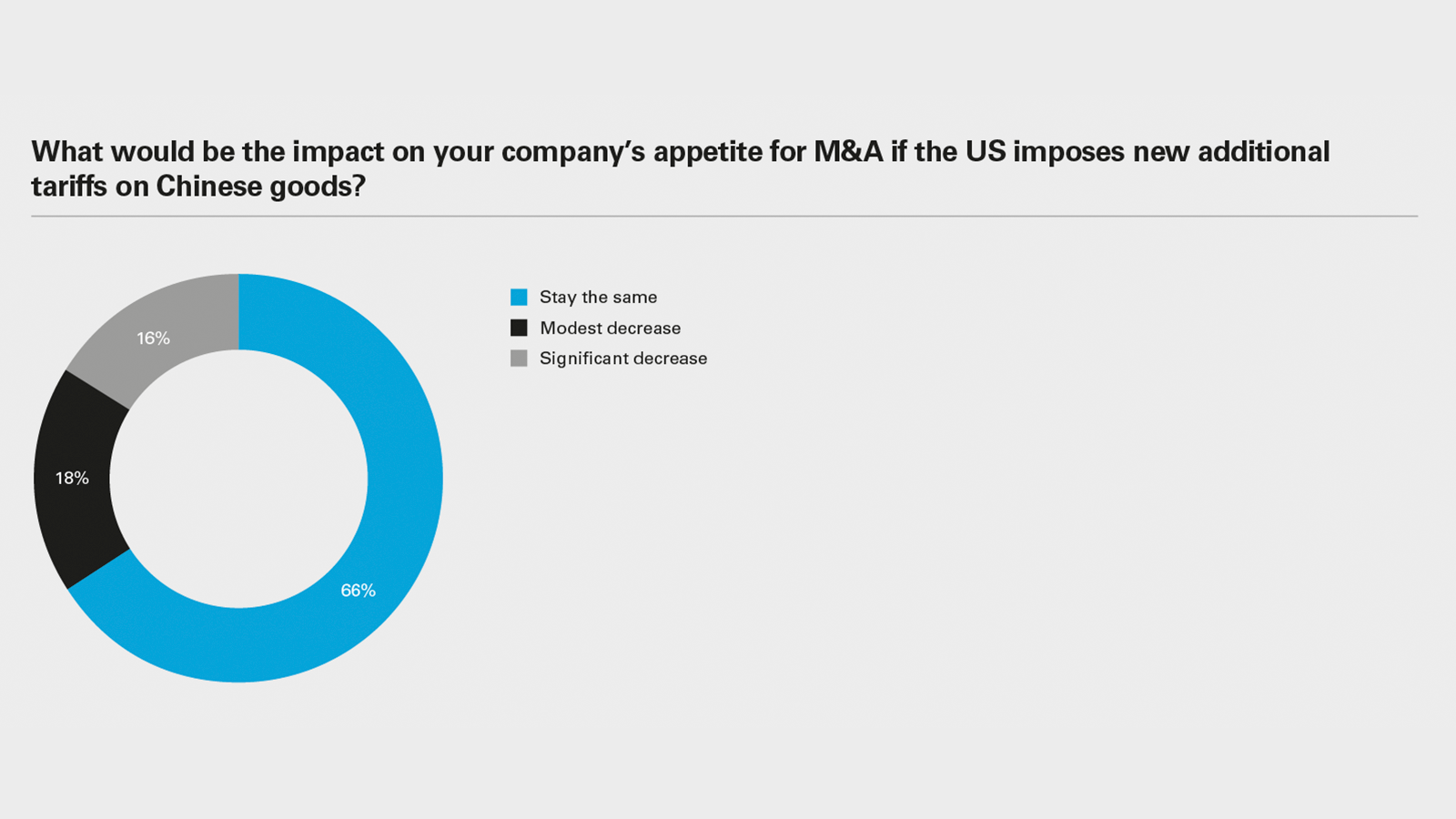 Even though two-thirds of respondents were unconcerned with the imposition of tariffs, more than half of those surveyed disagreed (52 percent) with legislative changes that expand the jurisdiction of CFIUS, which can block inbound M&A on national security grounds.

The expansion of CFIUS’s jurisdiction puts it at the forefront of any regulatory issues dealmakers need to address when handling cross-border transaction involving a target company based in the US.

"Foreign companies face so many regulatory restrictions and if CFIUS’s jurisdiction is expanded, foreign companies will have another reason to worry about looking to the US for acquisitions. If the market is to grow continuously, there should be greater international cooperation," a senior vice president of corporate development at a consumer company says.

Just under a quarter of respondents (24 percent), however, believe the extended powers are necessary, while 24 percent neither agree nor disagree.

"I think it is required to safeguard the interest of American businesses and keep the credibility of our domestic market," a finance director at a financial services group says. "I would want CFIUS to have the powers it needs to block all those investments it thinks are a concern and can harm the harmony of our market." 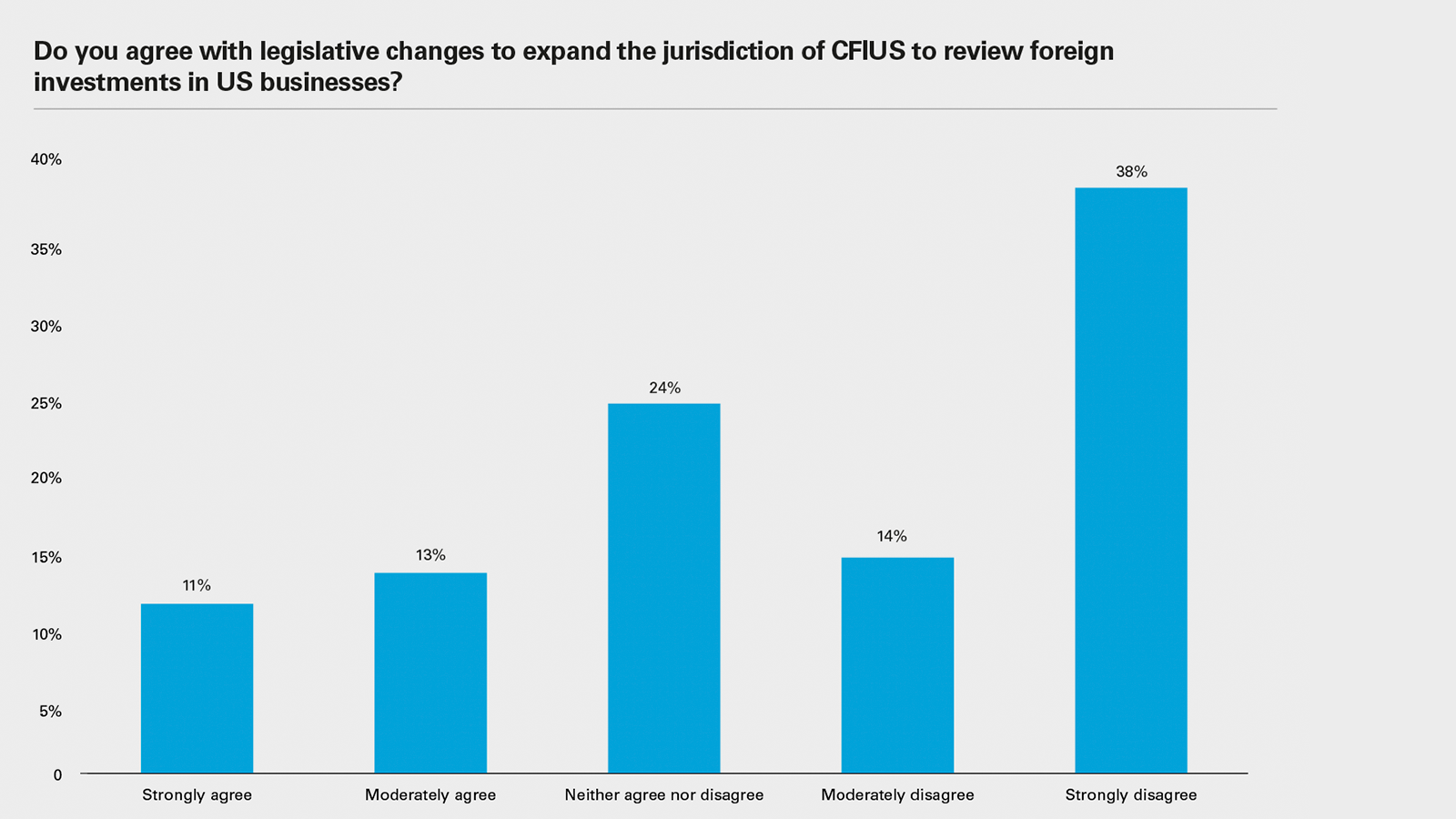 Aside from CFIUS, the other major concern expressed by respondents in the survey is the high volume of lapsed deals.

There have been a number of high-profile lapsed deals in 2018, reflecting the concerns of survey respondents. President Trump blocked then-Singapore-based semiconductor firm Broadcom’s hostile bid for US peer Qualcomm on national security grounds, and Qualcomm abandoned its bid for NXP Semiconductors after the deal was blocked by Chinese regulators.

Twenty-eight percent of respondents said a deal they have worked on in the past two years has lapsed. Among those respondents, 89 percent say factors uncovered during due diligence caused the deal to fail and 68 percent say changes in market conditions played a role, while 44 percent cited antitrust regulatory issues.

The findings mirror those of a similar survey of 150 technology executives by White & Case, who also cited antitrust and issues uncovered in due diligence as the main causes of failed deals.

While 2018 has been an active year for M&A, buyers are acting carefully, and the increased volatility means that both sides of a transaction may find it difficult to feel confident that they are doing a deal at the right time and for the right price. 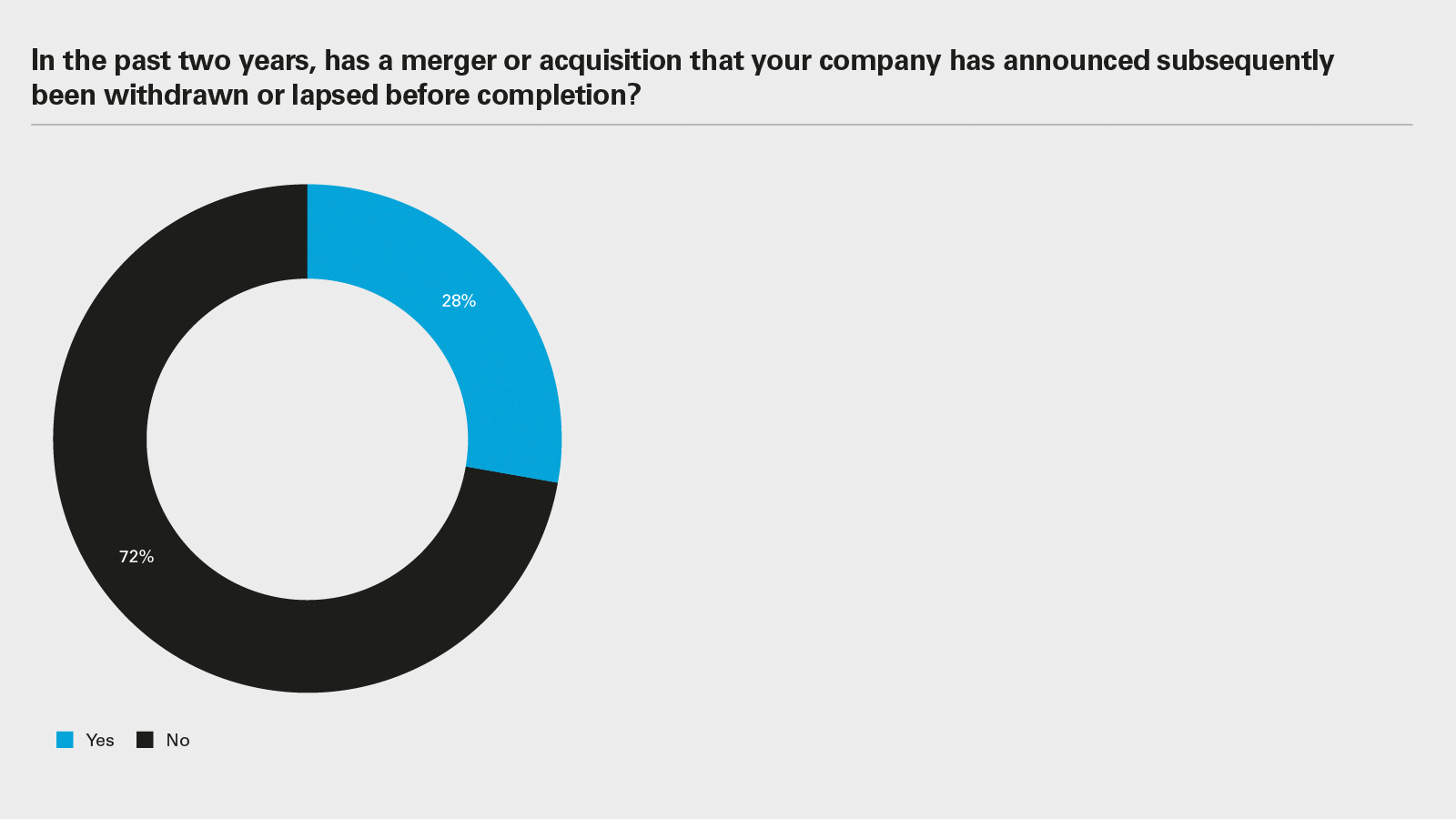 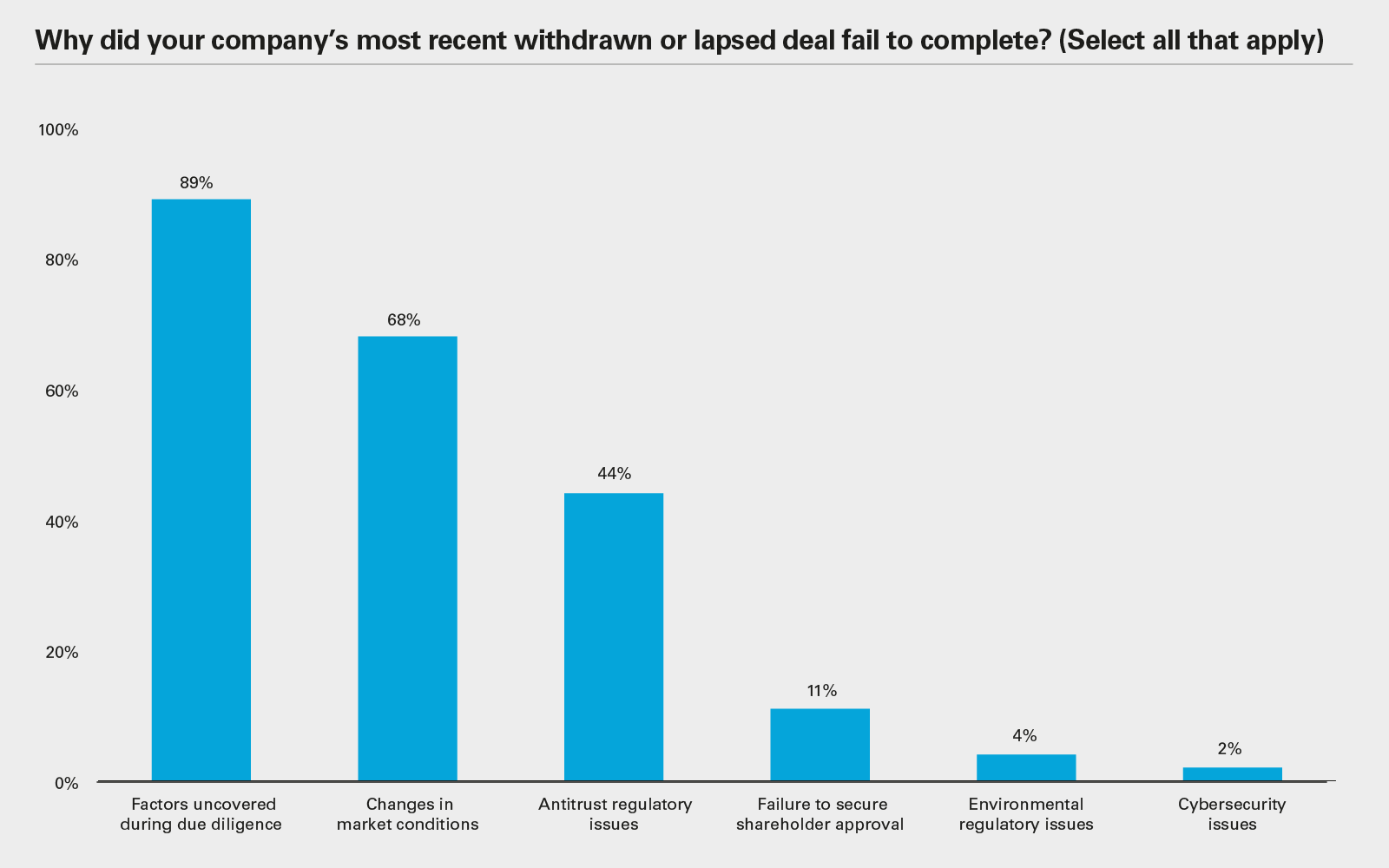