Justice for all – it's a cornerstone of the US legal system, but it's a statement that often falls short of its promise. Our pro bono work aims to change things for the better.

The broad range of matters our lawyers in the US take on reflect our commitment to the crucial principle of equal legal access.

A matter of life and death

Making a case for asylum seekers

How we're making a difference

For all its strengths, the US justice system does not ensure equitable access to justice and remains vulnerable to abuses of power. That's why firms like ours have an important, even necessary, part to play in providing individual representation and driving forward systemic reform.

"Our pro bono work in this area is a powerful reflection of our ability to make a difference," explains Louis O'Neill, Counsel and Director of Pro Bono.

"Examples include a class action suit we filed on behalf of children affected by lead exposure in Flint, Michigan, and our representation of the citizens of Ferguson, Missouri, who have been arrested and jailed for non-payment of parking tickets and other minor offenses."

The approach is also evident in our lengthy appeals of death penalty cases where significant questions have arisen as to our clients' guilt.

Lou says: "The broad range of matters our lawyers in the US take on reflect our commitment to the crucial principle of equal legal access."

Our pro bono research and analysis also contributes to the health of the justice system.

For example, we recently produced a report for the Prosecutors' Center for Excellence relating to police body-worn cameras.

These cameras play an increasingly prominent role in police departments, criminal investigations, and prosecutions across the US, but as of yet there are no national standards for them.

Our report guides prosecutors through issues surrounding this new technology.

Our work on the de facto debtors' prisons in Ferguson – where people dealing with minor civil infractions like parking tickets have been jailed for criminal contempt over non-payment of fines – encapsulates the power of our pro bono partnerships to address broad injustice.

Working with Arch City Defenders, St. Louis University School of Law, and Equal Justice Under Law, we conducted a painstaking review of a large volume of arrest records and paperwork going back to 2010, to determine how minor fines can lead to incarceration of the poor.

Based on this evidence, we filed a suit against the city. Depositions against city officials have begun and the parties have been ordered to mediate. Meanwhile, we are working with other firms and legal-service providers in New York to study the issue further and work out ways to systematically combat debtors' prisons in many jurisdictions.

A matter of life and death

Individual representation is an equally important part of our effort to increase access to justice, as reflected by several death penalty appeals we have taken on: highly demanding work that can literally be a matter of life and death.

For example, in May 2015, the American Bar Association called on the Firm to represent a man who was scheduled to be executed just a few months later.

Working against the clock, we persuaded the State of Texas and the trial court overseeing the case to halt our client's execution pending DNA testing of possibly exculpatory evidence in the State's possession.

We are continuing to represent the client through ongoing DNA developments.

A similar sense of urgency guided our work last year on the Clemency Project, a Department of Justice initiative to redress disproportionately long sentences for people convicted of low-level, nonviolent drug crimes.

Our work led to sentence commutations for three clients, two of whom had been serving life sentences.

One had begun to use methamphetamine after a traumatic military career, and was convicted of intent to distribute.

Another fell into drug addiction after being left to live on the streets of Los Angeles as a young child.

In 2016, we joined forces with the American Civil Liberties Union of Michigan and the Education Law Center, a public interest law firm, to file a class action complaint on behalf of the children of Flint, Michigan, who suffered from lead exposure during the city's water crisis.

Our complaint alleges that these children have been denied the special education services that are their right under the federal Individuals with Disabilities Education Act, the Americans with Disabilities Act, and Michigan State Law.

As our complaint states: "In the wake of the Flint lead crisis, Flint children face an unprecedented educational and civil rights disaster. It is impossible to overstate the resounding effects of the failure to provide meaningful educational opportunities, and to provide them now."

Making a case for asylum seekers

Recently, we won asylum for a young man who fled El Salvador in 2013 to escape a harrowing history of abuse on account of his homosexuality.

The persecution this client faced as a gay man was compounded when he began to receive threats after witnessing the murder of his cousin by the MS-13 gang. The client is now living in New York and pursuing his education.

"As a firm," Lou says, "we strive for a mix of systemic and individual work to address the current access-to-justice issues in America.

"These matters build on one another, and many also touch on the other pillars of our pro bono practice: promoting rule of law and good governance, and supporting non-governmental organizations (NGOs) with a social mission.

"Life-changing representation at the individual level (whether for asylum-seekers, children requiring the special educational services accorded them by law, or criminal defendants) goes hand in hand with major class-action suits and other large cases intended to promote systemic reform."

How we're making a difference 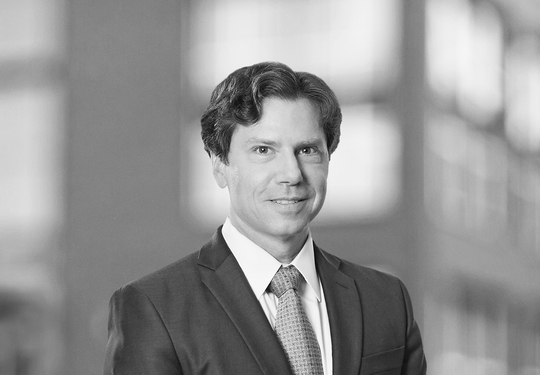