The 'Taskforce on Scaling Voluntary Carbon Markets' (the "Taskforce") published a blueprint for a voluntary greenhouse gas or carbon market in its 10 November 2020 Consultation Document. The Taskforce's Consultation Document includes recommended actions for addressing the most pressing pain-points facing existing voluntary carbon markets. The Taskforce is a private sector initiative working to scale an effective and efficient voluntary carbon credit market.

The Taskforce is spearheaded by Mark Carney, UN Special Envoy for Climate Action and Finance Advisor to UK Prime Minister Boris Johnson for the 26th meeting of the Conference of the Parties to the United Nations Framework Convention on Climate Change (UNFCCC) ("COP26"). The Taskforce is chaired by Bill Winters, Group Chief Executive, Standard Chartered and sponsored by the Institute of International Finance ("IIF") under the leadership of IIF President and CEO, Tim Adams. It is made up of more than 50 members globally, representing buyers and sellers of carbon credits, standard setters, the financial sector and market infrastructure providers, including Ingrid York of White & Case, and is supported by a consultation group, composed of subject-matter experts from more than 80 institutions.

Establishing a voluntary carbon credit market is viewed as an important component of the global effort to mitigate climate change. The need for a widely accepted blueprint for a voluntary market has been driven by the failure of the Parties to the Paris Agreement to agree to a rulebook for a market mechanism to allow for emissions trading, and the wide variety in current voluntary market standards.

Voluntary carbon credit markets present a market-based approach to controlling greenhouse gas emissions. Voluntary markets allow individuals, companies or governments to purchase greenhouse gas or carbon credits to mitigate or offset their own emissions by financing the avoidance or reduction of emissions from other sources, or the removal of greenhouse gases from the atmosphere. Voluntary markets involve credits used for voluntary purposes, as opposed to credits used to meet compliance obligations in jurisdictions with regulated carbon market schemes (e.g., the Regional Greenhouse Gas Initiative in the eastern United States, California's greenhouse gas trading scheme, the EU Emissions Trading Scheme, etc.)

There is no centralized voluntary greenhouse gas or carbon credit market. Project developers can sell their credits directly to buyers, sell their credits through a broker or an exchange, or sell to a retailer who then resells the credits to a buyer. The majority of voluntary credits are purchased by the private sector, where corporate social responsibility goals and industry leadership are typically the key drivers of credit purchases. As the decarbonization of the global economy accelerates, demand for voluntary offsetting will likely increase. That demand is more likely to be met if a large-scale, voluntary carbon market takes shape, which is able to help companies achieve net zero and net-negative goals.

Currently, the leading standards for credit certification include the Voluntary Carbon Standard, Plan Vivo, the Gold Standard, the American Carbon Registry, Climate Action Reserve, and the Verified Carbon Standard Program. Each industry standard involves different methodologies for measuring and verifying emissions reductions. The voluntary carbon market has made strides in both market functioning and credit integrity since its early days. However, structural challenges remain to be solved as buyers struggle to navigate various standards to find high-quality carbon credits at transparent prices, and financial intermediaries and data players have not entered the market at scale, leading to a current state of low liquidity and limited data transparency. The purpose of the Taskforce is to significantly scale up voluntary carbon markets and ensure they are transparent, verifiable and robust. Hence, as first step, the Taskforce developed a blueprint for a voluntary carbon market. 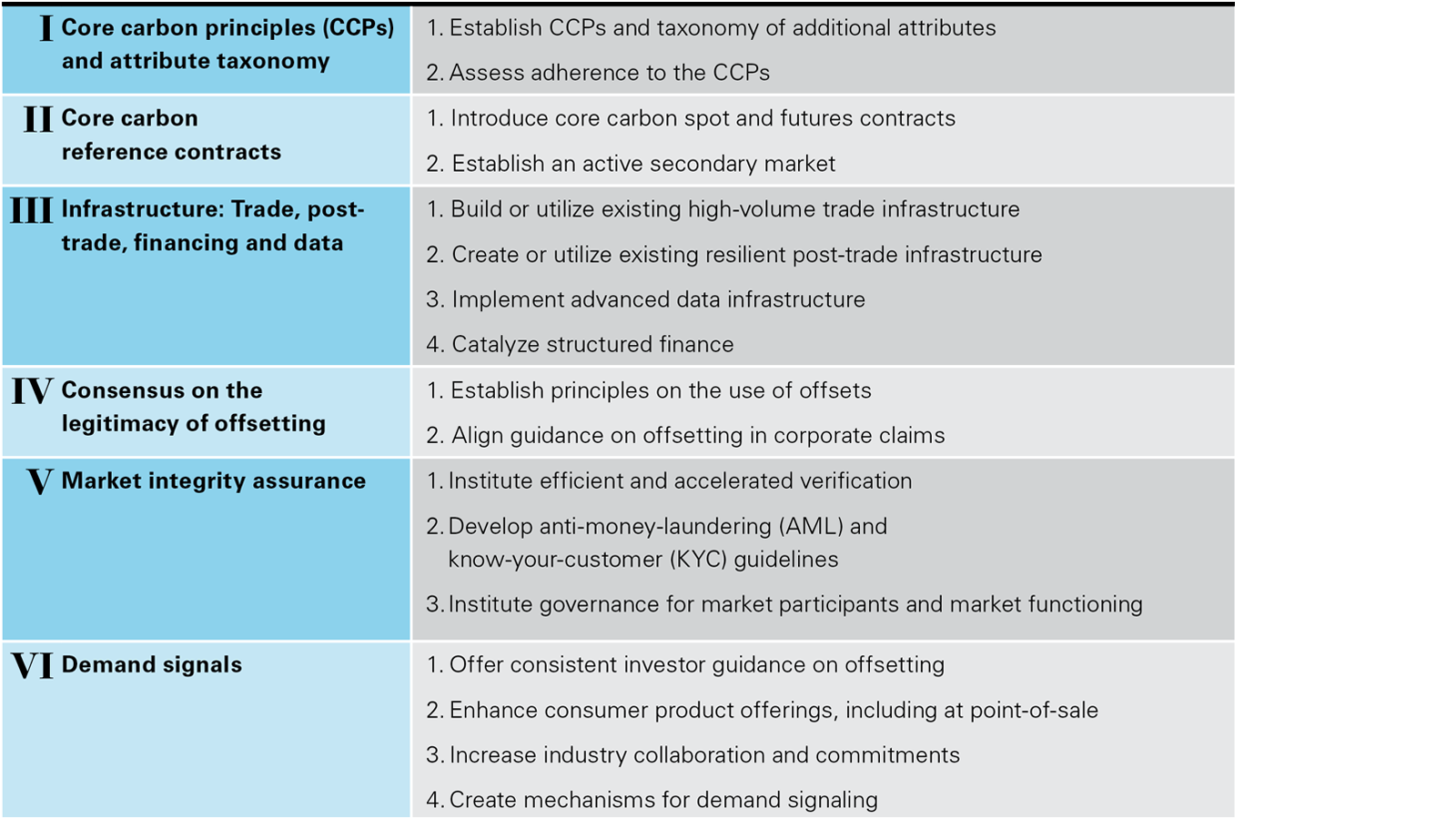 To support the scaling-up of voluntary carbon markets, the Taskforce has identified 17 recommendations under six major topics across the value chain (including supply, market mechanisms and demand) requiring action, as summarized below. It is noteworthy that in respect of various subjects there are open items for further consideration and several important questions are posed for consultation.

The Taskforce was focused on the integrity of the market as a foundation stone for its scaling. It accordingly firstly recommends the establishment and maintenance of core carbon principles ("CCPs") by an independent third party, which would set out threshold quality criteria against which carbon credits and their underlying methodology can be assessed. The establishment of CCPs would build confidence and credibility in voluntary carbon markets, allowing the market to develop more successfully.

The independent third party would also define in a new taxonomy a set of additional attributes (e.g., vintage, project type (i.e.. avoidance/reduction or removal), additional benefits beyond emissions reductions (i.e., co-benefits) and impact on UN Sustainable Development Goals, location and inclusion of corresponding adjustments). Reference contracts may then be built on the basis of the CCPs and the additional attributes would function to allow buyers further optionality under their carbon contracts. This standardization of contract terminology serves to increase market liquidity.

The Taskforce also recommends the need for an independent third party organization to be tasked with assessing carbon credit standards, methodologies and validation against the CCPs and additional attributes. While it is possible for this work to be conducted by the same body as the one who hosts the CCPs, the Taskforce recommends this task be carried out by separate expert verification agencies, which are accredited by the body hosting the CCPs.

The Taskforce recommends the introduction of core carbon spot and futures contracts, with the aim of matching suppliers' products and buyers' preferences more efficiently and critically providing a daily reference carbon price for a standardized product.

These contracts would be physically settled, traded on exchange and cleared via clearing houses. Futures contracts should be fungible to allow for trading across all markets and multiple platforms and could potentially also be cash settled. Over time, the Taskforce envisages that exchanges could also develop reference contracts which combine the core carbon contract with additional attributes that are separately priced. The Taskforce also encourages large buyers to purchase a share of their voluntary credits on exchange, through reference contracts, to encourage the development of liquidity. This would also reinforce the efficacy of the published carbon price. There is also discussion regarding the development of a separate and complementary over-the-counter (off exchange) market for carbon contracts in both standardized and bespoke format, which will benefit from the establishment of a reference contract.

To enable more efficient trading of carbon credits, the Taskforce recommends for an appropriate industry body to host and create standardized documentation to govern these trades. It is recommended that master agreements be improved based on currently existing agreements, such as the ISDA emissions trading annex.

The Taskforce also recommends that the establishment of an active secondary market will allow market participants to manage and hedge risks that can arise from, for example, carbon projects or carbon reduction commitments. Such a market would increase access to carbon markets for those participants who would not traditionally be present in financial markets and/or may not be able to easily access exchanges or clearing houses.

The Taskforce recommends that a set of infrastructure components must be in place to handle large scale trading of core carbon reference contracts. The actions to develop the target infrastructure are:

Topic Four: Consensus on the legitimacy of offsetting

The Taskforce admits that there is a lack of shared vision on the role of carbon offsets in achieving net zero goals, with many stakeholders having legitimate concerns about carbon offsetting crowding out other decarbonization efforts (for example, reduction of a company's own emission levels). With this in mind, the Taskforce wishes to establish 'Principles for Net Zero-Aligned Corporate Claims and Use of Offsets' to shift public perception. These principles include companies:

The Taskforce also proposes 'Principles for Credible Use of Offsets in Products or at Point of Sale'. Most notably, these principles require companies to provide more pricing and product transparency for customers by being clear about profits they make from offset products, disclose whether the carbon offset has any co-benefits and allow end-consumers to access data that validates the retirement of the purchased credits (or they obtain third party validation and auditing of point of sale products to demonstrate use of funds to purchase and receive carbon credits).

The Taskforce also acknowledges that there is some inconsistency in the treatment of carbon credits with regard to corporate commitments on climate action that needs to be addressed. For example, offsetting is not counted towards science-based emissions reduction targets but the Science-Based Targets Initiative does recognize the role of offsetting towards net-zero claims. It is also recommended that harmonization of guidance is achieved in respect of both carbon accounting and corporate claims standards.

Growth of voluntary carbon markets can increase the risk of errors, fraud and money laundering between market participants. The Taskforce therefore recommends:

An independent body should also be established to provide guidance and perform key functions to ensure there is the high level of environmental and market integrity needed for the voluntary carbon markets to be successful. Its three key focuses would be participant eligibility, participant oversight and market functioning oversight. For example, regarding the use of carbon credits, if this is providing a disincentive for alternative climate action (such as companies reducing their own emissions), a governance body must identify such issue and, if necessary, implement new principles to address it. Regarding participant oversight, this could include the establishment of a new process for accrediting the validation and verification bodies that assess projects and methodologies and authorize issuance of carbon credits. Additionally, regarding the oversight of market functioning, this may include developing principles to prevent fraud across the market chain and ensuring good anti-money laundering practices. The identity of this entity is subject to further consideration and its role will be important in reinforcing the integrity of the market as it rapidly scales up over time.

The Taskforce is of the view that a clear demand signal from buyers could increase liquidity in carbon markets and scale up supply. The Taskforce recommends a number of ways to increase demand of carbon credits, including:

Commentary – why is this important right now?

The Taskforce argues that the global climate change mitigation goals simply cannot be achieved by way of emissions reductions only. Instead, the Taskforce advocates that carbon offsetting must accordingly be an important part of any such transition. The Taskforce notes that voluntary carbon markets must grow by at least 15 times to meet the necessary corporate demand. The intention of the Consultation Document is to be a catalyst for such radical change.

Next year's COP26 will focus investors' minds on the sustainability strategies of the companies and institutions in which they invest across the globe. Carbon credits are a key tool for boards to ensure relevant sustainability targets are met, corporate resilience is sustained and for the goals of the Paris Agreement to be achieved. But the usefulness of carbon credits depends on the liquidity and consistent price generation of the markets on which they are traded, which in turn depends on reliable and consistent data, taxonomies and benchmarks. This Taskforce has set out concrete steps to accelerate and scale up the development of these markets as the axis for generating liquidity, pricing, data, taxonomies and benchmarks—ultimately achieving real and swift mitigation of climate change.

The consultation period for the Consultation Document is open until 10 December 2020. A final report is due to be published in January 2021. The work of the Taskforce will turn to implementation and the establishment of a pilot market within the next 12 months. It is made clear in the Consultation Document that the Taskforce considers this a highly collaborative process and invites parties interested in leading or driving key action items to make themselves known via the consultation. Clearly the ambition of the proposal is great and will require participation of all relevant stakeholders to ensure its success.

Further details regarding the Taskforce can be located here.