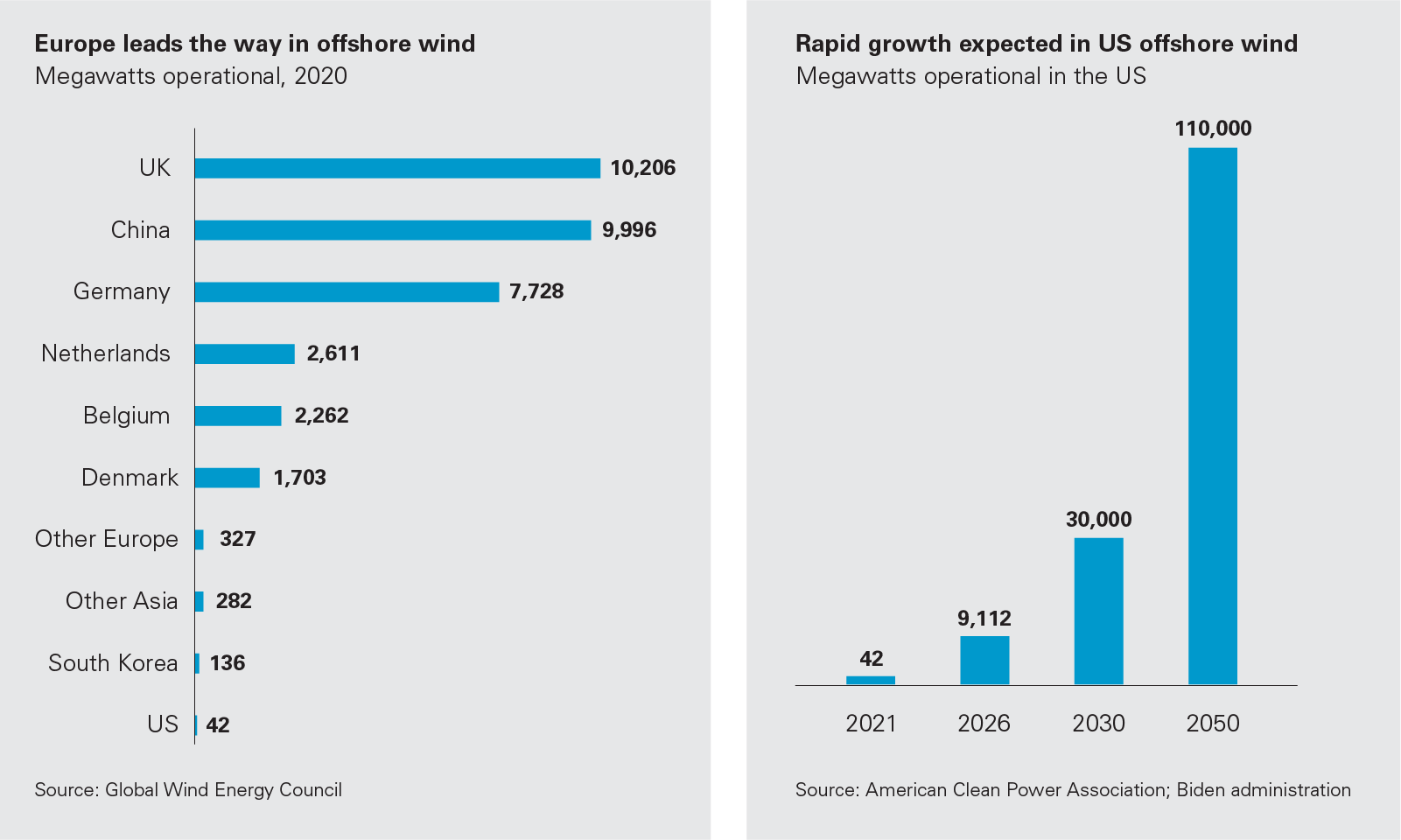 Government incentives are making it easier to finance offshore wind projects, and developers are taking lessons from Europe to manage costs and risk, and attract investors

Yet even an average-size offshore wind farm costs billions to build. And to date, though there are many operating offshore turbines globally, only one small project has reached financial close in the US.

That may change soon. The Biden administration recently set a goal of installing 30 GWs of US offshore wind capacity by 2030. In 2021, one new project, Vineyard Wind, was approved for development, and four others started or progressed in the environmental review process.

Financing can be challenging, but the capital stack of a typical offshore wind project in the US is expected to be quite similar to those of other utility-scale renewable energy projects. Most consist of construction debt and cash equity for construction, replaced by mini-perm term debt, tax equity and cash equity around the time the project starts operations. On occasion, mezzanine debt is used during construction.

In this piece, we focus on some of the latest financing opportunities available to offshore wind developers in the US. This includes the relevant production and investment tax credits, the safe harbor rule, effects of possible legislative developments, and other financing options.

Until recently, all onshore and offshore wind projects were eligible for production tax credits (PTCs) at specified percentages of a baseline rate of 1.5 cents per kWh of electricity produced and sold to unrelated parties. The rate was adjusted for inflation each year—in 2020, the baseline rate was increased to 2.5 cents per kWh. For projects that began construction after December 31, 2016, the percentages of the baseline rate available for credits declined pursuant to "phase-out" rules. Projects that began construction after 2020 would not have been eligible for PTCs.

That changed when the Consolidated Appropriations Act of 2021 was signed into law on December 27, 2020. The law provided for a one-year extension of the PTC, so projects that began construction in 2021 are eligible for PTCs.

This changed when the Consolidated Appropriations Act of 2021 was signed into law on December 27, 2020. The law extended the one-time option to receive ITCs, in lieu of PTCs, so that projects that started construction in 2021 are eligible for the 18 percent ITC.

More importantly for the offshore wind industry, the new law introduced certain targeted assistance that is specifically aimed at helping offshore wind projects. In particular, it provided a standalone ITC for qualified offshore wind facilities equal to 30 percent of the basis of applicable ITC property for any project where construction begins after 2016 and before 2026. Moreover, the 30 percent rate is fixed and not subject to phase-out rules. To receive the standalone ITC, projects must be located in the inland navigable waters of the US or in the coastal waters of the US, as described in the PTC definition of "qualified offshore wind facility."

On January 4, 2021, the Internal Revenue Service (IRS) issued Notice 2021-05, which extended the "continuity safe harbor" period from four to ten years for offshore wind projects. As a result, federal tax credits may be claimed for projects that start operations within ten years after starting construction. Moreover, projects are presumed to have continuously pursued construction during this time, thereby meeting one of the eligibility conditions for receipt of any tax credit.

The notice made clear that the IRS understands that offshore wind projects have longer construction schedules and are subject to more frequent construction delays than onshore projects.

As part of its American Jobs Plan, which includes several measures to accelerate de-carbonization of the US energy sector, the Biden administration proposed introduction of a "direct pay" option for federal tax credits. The proposal would allow developers to receive tax refunds regardless of their tax liabilities. Thus they would not have to find tax equity investors capable of using the federal tax credits to realize the benefit from them. It is unclear whether the "direct pay" option will gain traction (which will depend on any "haircut" that may be applied to such an option), but if implemented it could have significant implications for the sector.

In addition, some legislative initiatives to raise the federal corporate tax rate have been introduced in Washington. That includes a Biden administration plan, announced by the Treasury department in April, to raise the corporate tax rate from 21 percent to 28 percent. Higher rates could have an impact on the tax equity market, increasing demand for tax equity investment from investors and potentially making it easier for developers to attract tax equity investments.

Offshore wind projects typically take two to three years to build, which is more than double the time it takes to build the average onshore wind project. Tax equity investors usually have to commit capital when construction begins, and they don't make the majority of their investments until the project is operational. Thus it usually takes twice as long for tax equity investors to invest their committed capital in offshore projects, compared to onshore projects. To reduce the time commitment required of tax equity investors, developers could forgo a portion of the tax equity tranche they usually secure at financial closing and instead use mezzanine/bridge debt facilities. Midway into construction, they could turn to tax equity investors to partly or completely replace their bridge debt.

Besides the traditional sources of capital for offshore wind projects, such as (a) construction debt and mini-perm term debt provided by commercial banks, (b) tax equity and (c) cash equity, developers could explore opportunities for other sources of capital. These could include project bonds that match longer-term offtake contracts. In addition, export-credit agency financings and vendor financings may be a viable option depending on the equipment manufacturer.

Developers could tap various funding programs designed to support renewable energy projects. Of note is the Renewable Energy and Efficient Energy Program administered by the US Department of Energy (DOE). On March 30, 2021, the DOE's Loan Program Office published an offshore wind "fact sheet" indicating that US$3 billion in loan guarantees have been earmarked to support offshore wind projects.

This DOE program offers a repayment guaranty for senior construction debt and may provide direct loans to developers, thereby making available an additional source of capital at a potentially lower cost. While the size of the program is fairly limited compared to the size of projects currently under development, it may be particularly helpful for projects that utilize innovative technology (e.g., floating offshore wind). Given the DOE's internal engineering resources, its participation in a project may provide comfort to other capital providers.

The need for such other sources of capital will be driven by the robustness of the commercial bank market for construction and mini-perm term debt, as well as further developments in the tax equity market.

The US regulatory environment for offshore wind is changing rapidly, and that is opening new opportunities for financing new projects. As the market takes off, there is likely to be no shortage of investors that are interested in the space.