After stepping into the space vacated by traditional banks and strategic investors following the financial crisis, private equity has established itself as a force to be reckoned with in financial services dealmaking.

In 2015, for the first time ever, private equity buyouts accounted for almost a fifth of all European financial services M&A by deal value. It was a landmark year for financial sponsors, who had previously found it difficult to compete in a highly regulated sector against multinational strategic buyers with low cost of capital.

The financial crisis provided a unique opportunity for private equity firms to gain a foothold in the financial services space. Financial institutions simultaneously pulled back from M&A and sold off non-core divisions in order to repair balance sheets and shore up capital reserves. Buyout firms were suddenly seeing an unprecedented number of deal opportunities with little or no competition from strategics.

Private equity groups have not looked back, and the buyout industry has consolidated its position as a formidable player in financial services dealmaking during the last two years.

Even though strategics have returned to the fray, with larger deals such as Lloyds Bank’s £1.9 billion purchase of credit card company MBNA from Bank of America, private equity has continued to hold its own. In Europe in 2017 (year to date), buyout firms have secured 37 deals worth €6.9 billion in financial services, accounting for approximately 15 per cent of all deal activity in the sector. This is substantially higher than the average over previous years.

Private equity’s stronger position in financial services has been supported by the growth in the number of firms specialising in the sector post-crisis. A study conducted by research firm Preqin in 2015 found that in less than a year, the number of buyout houses actively pursuing financial services deals globally had increased by almost a fifth, from 1,449 in 2014 to 1,728 in 2015.

Meanwhile, firms specialising in financial services deals have experienced significant growth in their assets under management (AUM). AnaCap Financial Partners, for example, which was only founded in 2005, already has €3.2 billion under management across private equity, co-investment and credit strategies. Corsair Capital, which spun out of J.P. Morgan in 2006, Blackfin and JC Flowers are among the other specialist financial services houses that have experienced similar growth in their AUM.

Generalist buyout firms have also invested in building up their financial services offerings. They see three clear opportunities in the sector: the valuation dislocation within the sector following the liquidity freeze, the disruptive power of technology to upend traditional business models, and changes in legislation and regulation which encourage more plurality in the industry.

A post-crisis shift in regulators’ sentiment towards private equity investment in financial services has also supported the buyout industry’s progress. Eager to prevent distressed financial institutions from failing, regulators have recognised that, in many cases, private equity firms are the only serious buyers for assets in need of a bailout.

In Central and Eastern Europe, for example, initially reluctant financial services watchdogs eventually acknowledged that private equity was the best option for shoring up fragile banks.

Buyout firms have played a key role in rebuilding troubled banks in the region. Major deals have included Apollo and the European Bank of Reconstruction and Devlopment’s (EBRD) investment in Slovenia’s second-largest bank, Nova, as well as EBRD and Advent International’s carve-out of the Balkan subsidiaries of Hypo Alpe-Adria Bank.

Attitudes towards buyout investment in banks at Germany’s Federal Financial Supervisory Authority (BaFin), which traditionally has been sceptical of private equity’s capacity to support banks through down cycles, have also shifted. For example, the bidders in the running to buy a portfolio of assets worth more than €1.6 billion from troubled German lender HSH Nordbank are all understood to be financial sponsors.

However, private equity’s newfound presence in the sector is not just down to favourable external factors. Buyout firms have also taken proactive steps over the last two years to build up financial services sector expertise.

Two of the key reasons for sustained buyout success over the last two years have been leveraging knowledge gained from prior investments in the sector and recognising sub-sectors where private equity is best positioned to win deals and generate returns.

Buyout houses have actively sought to replicate successful financial services deals they have done in the past. Cinven, for example, is believed to have made 4x money from its £1.6 billion sale of closed-life group Guardian Financial to Admin Re and subsequently backed Heidelberger Leben, with a view to applying the same buy-and-build strategy it followed with Guardian.

Meanwhile Pollen Street Capital and BC Partners are close to securing the takeover of challenger bank Shawbrook just two years after listing the company.

Part of the process

Payment processing has been one of the main sub-sectors on which private equity firms have focused. In the past, these systems were not prioritised by banks and sold off to financial sponsors. The new owners have subsequently taken advantage of the shift towards cashless payments and moved to consolidate a sub-sector where new providers have proliferated thanks to technological advances.

Advent International and BC Partners have made repeated successful investments in payment processing companies, listing WorldPay in a £4.8 billion London IPO in 2015 and then floating Nordic payments processing business Nets in a €4 billion listing in Copenhagen.

Both Nets and WorldPay have subsequently been subject to takeovers, by buyout house Hellman & Friedman and debit and credit card processor Vantiv respectively, for even higher valuations than when they were listed. This further demonstrates that private equity firms have the expertise to create long-term value in the payment processing space.

Other firms active in the space include Nordic Capital, which recently sold Bambora to Ingenico for €1.5 billion and has also sold Scandinavian merchant payment services business Point International to Verifone in a US$1 billion transaction. Buyout activity in the sub-sector has continued apace with, for example, Permira investing in Klarna, a payment services company that has gone on to receive a banking license.

Private equity firms have also developed deep expertise in the acquisition and management of non-performing loans (NPLs) from banks. Private equity houses now represent the largest universe of buyers for NPLs, the value of which in Europe alone is estimated to be worth approximately €1 trillion.

Deloitte figures show that private equity firms have raised at least US$300 billion for investment in NPLs. Recent deals include Bain Capital buying up NPL portfolios in Spain and Portugal and Unicredit selling off baskets of loans to Fortress and Pimco. AnaCap has launched a €325 million high-yield bond to finance bad debt purchases, and Apollo has built a dedicated NPL team that raised €2.5 billion for its most recent fund.

Banks are unable to take on the risk that comes with NPL portfolios, and state aid rules restrict the measures that governments can implement to shore up troubled institutions. Private equity firms have stepped into the vacuum, experiencing substantial deal flow and developing proprietary valuation techniques to assess recovery rates and form a view on pricing.

In the post-crisis years, private equity has evolved from a financial services outsider into an established presence in M&A within the industry.

It has filled the space vacated by banks and insurers, invested in the development of specialist financial services skills, and targeted specific niches within the sector. Recent deal activity suggests that this pattern is unlikely to change any time soon, with private equity firms potentially becoming an even greater force in the financial services sector in the years to come. 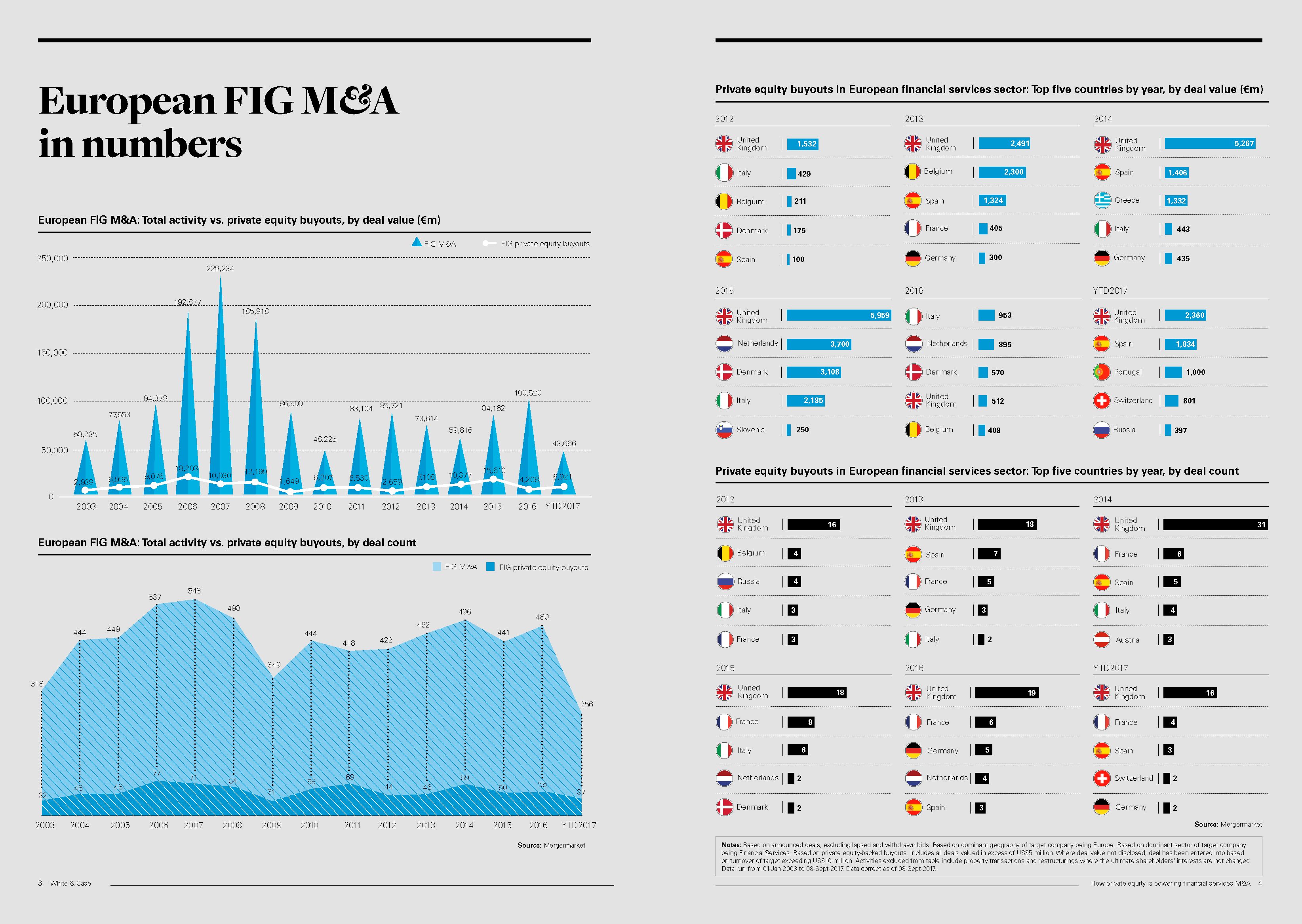