Back
Consumer financial services at a crossroads

[W]e need structural and legislative change to the way this place is being run."

I request that Congress make four changes to the law to establish meaningful accountability for the Bureau: (1) [f]und the Bureau through Congressional appropriations; (2) [r]equire legislative approval of major Bureau rules; (3) [e]nsure that the Director answers to the President in the exercise of executive authority; and (4) [c]reate an independent Inspector General for the Bureau."
CFPB Acting Director Mick Mulvaney

Through a series of swift moves, Acting Director Mulvaney has brought in several political appointees to serve in key positions, including as his chief of staff, senior advisors and communications Director. He has also solicited applications for membership on its Consumer Advisory Board and its Credit Union Advisory Council. In addition, Acting Director Mulvaney has announced that the Office of Fair Lending and Equal Opportunity will be transferred from the Division of Supervision, Enforcement & Fair Lending, to the Office of the Director. The Office of Fair Lending and Equal Opportunity will no longer have fair lending supervisory authority, but rather will focus on advocacy, coordination and education. Most recently, Acting Director Mulvaney called for four major reforms to the CFPB: subjecting it to Congressional appropriations; giving the President more oversight of the Bureau; creating a dedicated CFPB inspector general; and subjecting all major new CFPB rules to Congressional approval.

According to Acting Director Mulvaney, the CFPB will no longer "push the envelope" and will dial down its previously aggressive enforcement approach. Instead, AGs are expected to take the lead in enforcing consumer financial protection laws locally, while the Bureau generally focuses on supervision and education of consumers as to their financial protection rights. Relying primarily on consumer complaint data, the CFPB will limit its enforcement efforts to quantifiable and unavoidable harm to consumers. In addition, the Bureau will no longer rely on broad UDAAP interpretations as an enforcement tool, nor will it pursue actions under expansive and novel legal theories. The reassignment of the Office of Fair Lending and Equal Opportunity and Mulvaney's decision to tap the CFPB's reserves (instead of requesting funding) also appear to demonstrate a dialing down of the Bureau's enforcement efforts. The new CFPB leadership could use the Bureau's other initiatives, such as Project Catalyst and its No-Action Letter policy, to afford companies regulatory and enforcement relief—though Acting Director Mulvaney has not yet signaled such a move.

According to its new mission statement, the CFPB will now seek to reduce the regulatory burden for CFS-related activities, particularly rules introduced by the previous CFPB leadership under the Bureau's discretionary authority. To that end, the Bureau intends to open new rulemakings to reconsider its payday, prepaid card and HMDA-related rules. The new CFPB leadership may also seek to revisit the Bureau's previous significant rules as part of its five-year "look-back" assessments mandated by the Dodd-Frank Act. The Bureau is nevertheless expected to release a long-anticipated debt collection rule, given the sheer volume of collections complaints and the new leadership's focus on that metric.

Changes to the CFPB's structure and supervisory authority are also looming, as lawmakers have sought to revamp the Bureau through the legislative process as well as subject its funding to Congressional appropriation. In December 2017, the Government Accountability Office (GAO) nullified a previous CFPB bulletin targeting dealer markups using disparate impact theories. Other proposed bills, currently in the House or Senate, would impact many of the CFPB's core functions if passed, including its oversight of small-dollar loans, mortgage-related entities and consumer lending generally. Notably, the proposed Home Mortgage Disclosure Adjustment Act would exempt community banks, small credit unions and nonbank mortgage lenders from the expanded HMDA disclosure requirements. Bipartisan joint resolutions in the House and Senate are also aiming to repeal the CFPB's Payday Rule under the Congressional Review Act (CRA). Lawmakers have also been actively trying to enable banks to issue high-interest payday loans (EQUAL Act), as well as to legislatively overturn the Second Circuit's decision in Madden v. Midland Funding to allow lenders to circumvent state interest caps. Finally, the Accountability of Wall Street Executives Act, introduced by certain Democrats, if passed, would permit state AGs to issue subpoenas to investigate national banks. Other pending proposals have sought to revamp the Bureau's leadership structure by transforming it into a multi-member, bipartisan commission—an undercurrent present in recent, key federal cases.

Acting Director Mulvaney has also ordered a comprehensive review of the Bureau, seeking public feedback on ways to improve the CFPB's oversight of regulated entities and enhance consumer protection. The below timeline chronologically reflects the areas subject to such ongoing review: 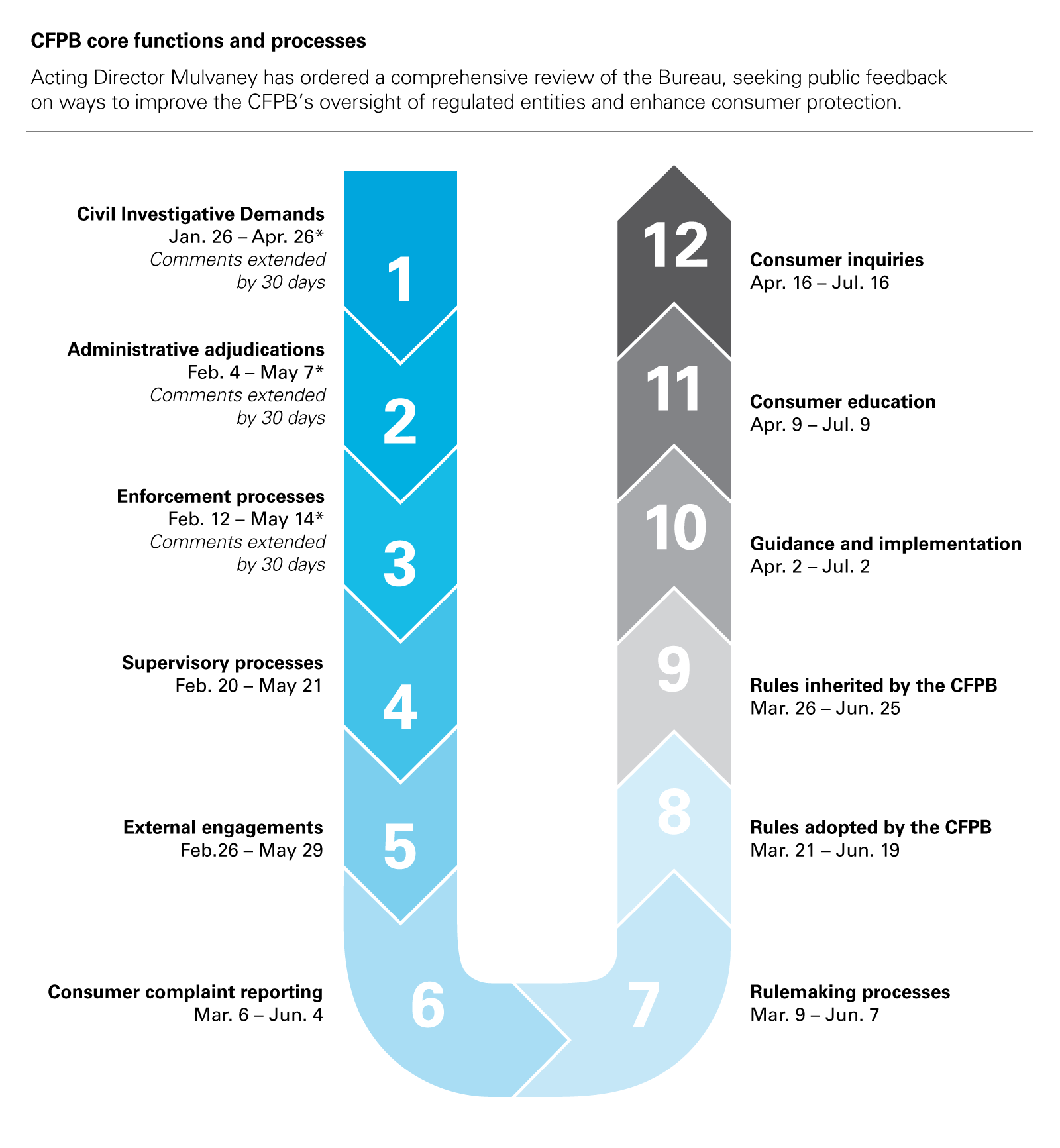 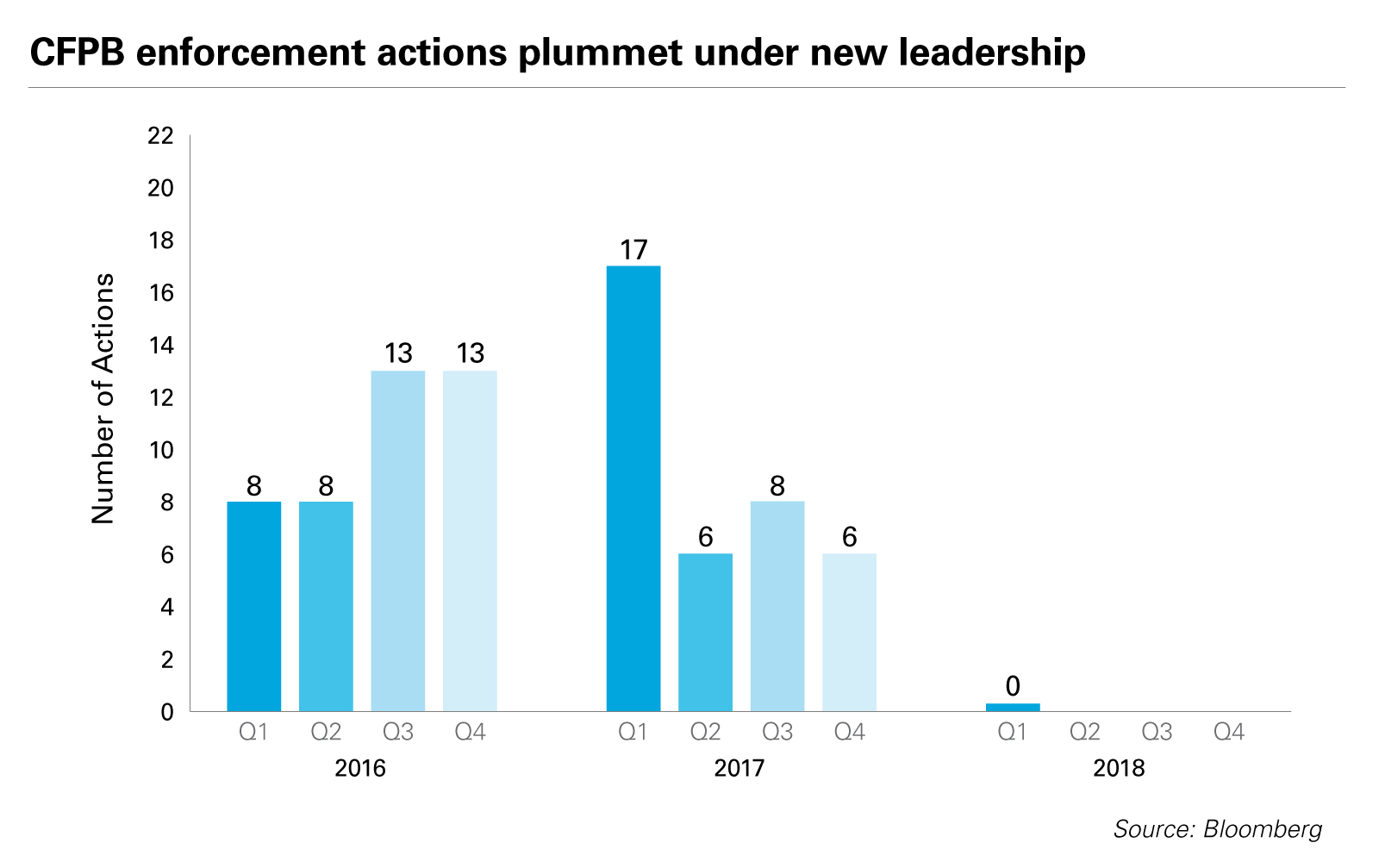 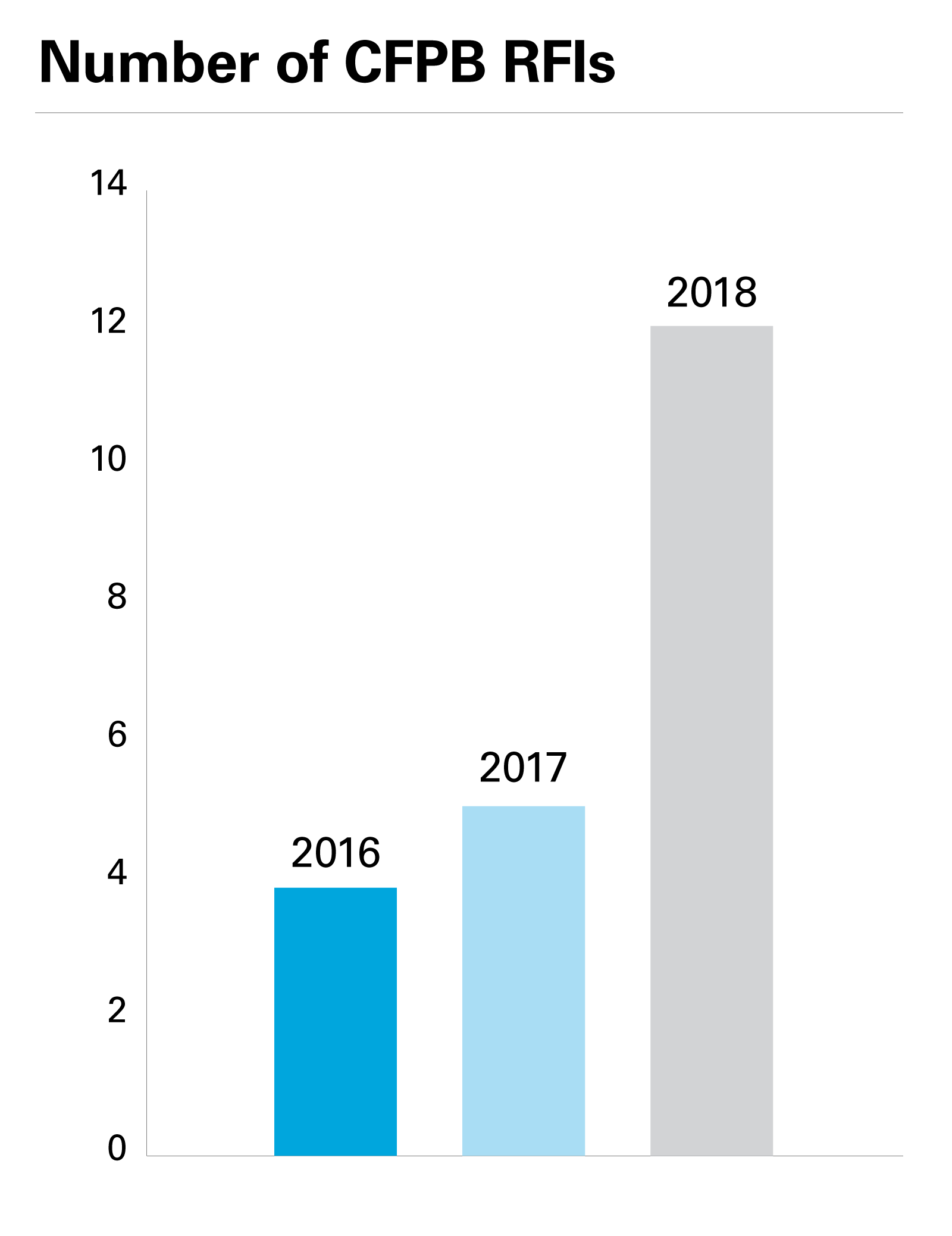