In response to the COVID-19 crisis, the federal bank regulators have unleashed a flurry of guidance to help financial institutions navigate these difficult times. To support financial markets and the economy generally, the Federal Reserve, FDIC and OCC have also issued interim final rules to encourage banks to continue to lend prudently amidst increasing market uncertainty and economic contraction. The Federal Reserve also announced that it will reduce certain supervision efforts to focus on monitoring and outreach as well as delay the effective date of its controlling influence rule.

Our team will provide periodic updates and insights as the crisis and the response continue to develop.Please refer to our COVID-19 Regulatory and Legislative Dashboard.

The Board of Governors of the Federal Reserve System (Federal Reserve), Federal Deposit Insurance Corporation (FDIC) and the Office of the Comptroller of the Currency (OCC) (agencies) have issued two joint interim final rules, followed by a Federal Reserve interim final rule, to temper the effects on banking organizations’ capital and liquidity measures of two important policy initiatives that respond to the growing financial instability and risks associated with the global COVID-19 crisis. The first joint rule makes technical changes to the capital rules to encourage banks to lend prudently to customers—even into their capital and liquidity buffers—to provide much needed credit to the US economy, and the Federal Reserve’s rule makes corresponding changes to its total loss absorbing capacity (TLAC) rule. The second joint rule reduces potential adverse effects under the capital rules of participating in the new Money Market Mutual Fund Liquidity Facility (MMLF).

In addition, the agencies issued an interim final rule granting banking organizations that implement the Credit Losses on Financial Instruments (CECL) accounting standard before the end of 2020 the option to delay for two years an estimate of CECL’s effect on regulatory capital, relative to the incurred loss methodology’s effect on regulatory capital, followed by a three-year transition period. Section 4014 of the CARES Act grants banking organizations temporary relief from the CECL standards (please refer to our recent CARES Act article). This modest relief is intended to allow banking organizations to concentrate efforts on lending to creditworthy households and businesses during the current crisis.1

The OCC has separately issued an interim final rule, and an order pursuant to that rule, concerning alternative compliance with the short-term investment funds (STIF) rule, effectively permitting temporary compliance with theSecurities and Exchange Commission Rule 2a-7 for money market mutual funds. This OCC interim final rule applies to national banks acting in a fiduciary capacity and certain state banks, as described below.

Generally, the agencies have taken such measures to allow banking organizations to focus their resources on responding to the effects of the COVID-19 crisis on their businesses and those of their customers as well as the general economic and financial dislocation caused by the crisis. Other measures include, for instance, the Federal Reserve’s delaying the effective date for its final rule on controlling influence under the Bank Holding Company Act and the Home Owners’ Loan Act from April 1, 2020, to September 30, 2020(please refer to our control alert).

Interim final rules to encourage banks to continue to lend

Under the current rules and market uncertainly, if banking organizations realize sudden, unanticipated drops in their capital ratios (or TLAC ratios, as applicable), they may have a strong incentive to limit their lending activity to avoid facing abrupt restrictions on distributions under the capital rules (or TLAC rule, as applicable). The interim final rules maintain the automatic limitations on capital distributions under the capital and TLAC rules, but seek to make their application more gradual so that a banking organization is less likely to be subject to abrupt and restrictive distribution limitations following a period in which it lends into its buffers in response to the crisis.

To accomplish this aim, the interim final rule revises the definition of “eligible retained income,” which applies to a banking organization’s capital and liquidity (and TLAC, as applicable) buffer requirements, as summarized below. 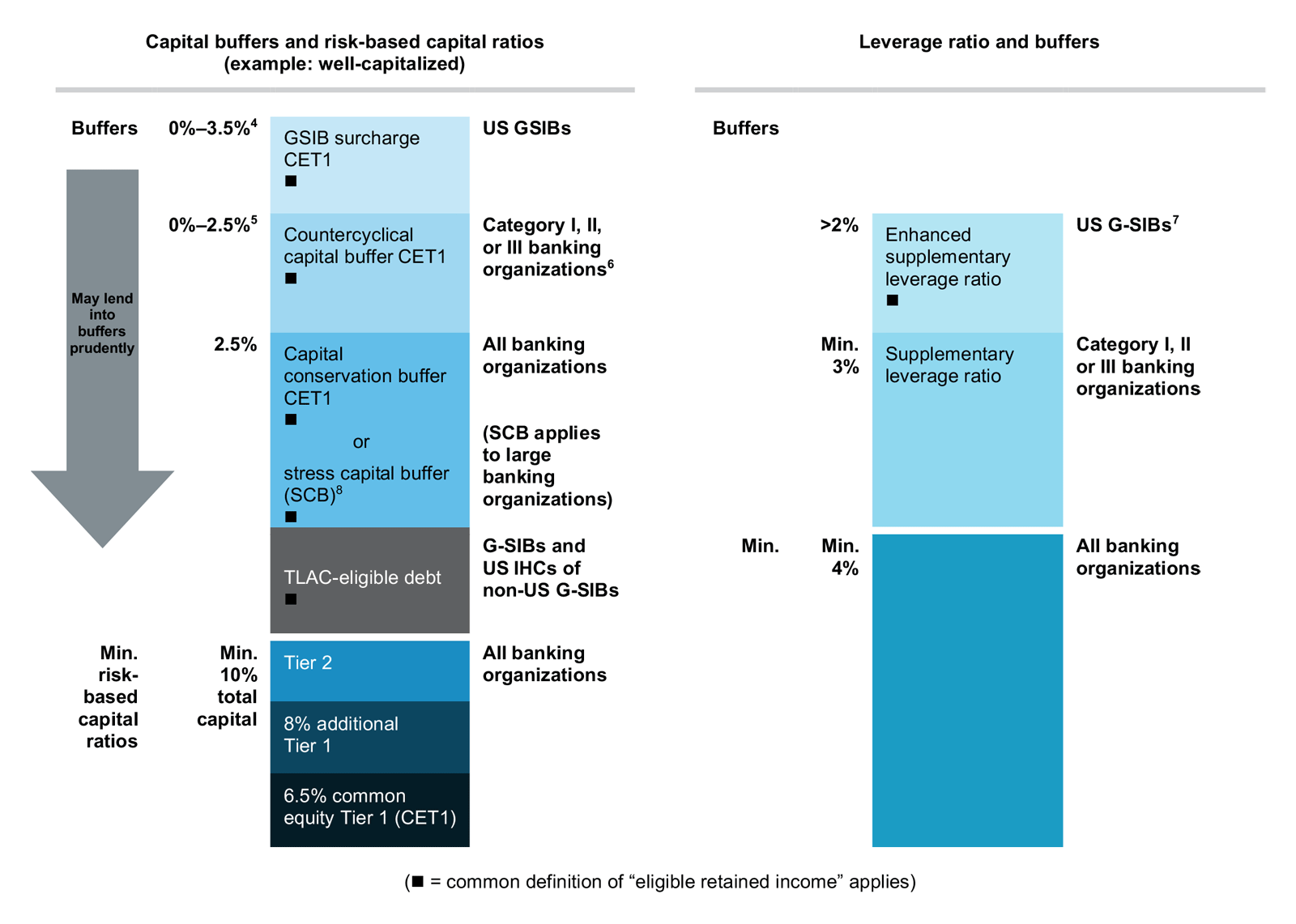 Under the new rule, a banking organization’s eligible retained income—for all applicable buffers—is the greater of two options:

Because the classic definition subtracts capital distributions made during the previous year, a period of sudden stress—such as the fallout from the current COVID-19 crisis—following a relatively calm period could result in very low (or zero) eligible retained income. In addition, under the new SCB rule (effective May 18, 2020), if a banking organization’s SCB requirement increased due to a change in its risk profile, then the banking organization’s capital levels might be insufficient to meet the SCB requirement and its eligible retained income could be very low or negative. In both scenarios, a banking organization could face sudden and severe distribution limitations even if its capital ratios only fall below applicable buffer requirements. The new alternative in the interim rule’s definition essentially stabilizes the calculation.

This rule came amidst a flurry of guidance and statements from the agencies encouraging financial institutions to meet the financial needs of customers during the COVID-19 crisis, consistent with safe and sound lending practices. The agencies have stated that if banks do so, they should not be subject to examiner criticism. As for examinations, the agencies also stated that they will work with financial institutions to schedule examinations and inspections to minimize disruption.

On March 18, 2020, the Federal Reserve authorized the Federal Reserve Bank of Boston (Boston Fed) to establish the Money Market Mutual Fund Liquidity Facility (MMLF) using its emergency powers under section 13(3) of the Federal Reserve Act, with the approval of the US Treasury Secretary. The Federal Reserve has set up the MMLF, as it did in the 2008 financial crisis, in response to disruptions in the financial markets that have put increasing liquidity pressure on money market mutual funds, which may need to seek a significant number of assets to meet redemption requests from clients with immediate cash needs. The agencies issued a second interim final rule to neutralize the regulatory effects of participation in the MMLF by banking organizations.

Participation in the MMLF entails pledging eligible collateral to the Boston Fed for non-recourse loans, and thus, banking organizations that participate must acquire and hold assets that could result in increased capital requirements under the capital rules. Because the loans are on a non-recourse basis (and therefore the assets purchased and pledged are not exposed to credit or market risk), the agencies have amended the capital rules to exclude the effect of purchasing assets through the MMLF from a banking organization’s regulatory capital. The agencies made the same technical change during the 2008 financial crisis for assets purchased through a similar liquidity facility.9

A banking organization that participates in the MMLF and takes advantage of this regulatory treatment under the capital rule must reduce its liability under the facility by the purchase price of the assets acquired with funds advanced from the facility.

In addition, the OCC issued the interim final rule on STIFs and related order effectively permitting temporary compliance with SEC Rule 2a-7 for money market mutual funds for the purpose of a bank’s maintaining a dollar-weighted average portfolio maturity of 120 days or less and a dollar-weighted average portfolio life maturity of 180 days or less. The rule applies to national banks acting in a fiduciary capacity for such STIFs and state banks subject to state law that incorporates the OCC STIF rule by reference (e.g., New York law). The OCC took this emergency step because it found that STIFs are facing market pressures and risks similar to those that money market mutual funds currently face. To benefit from the relief, banks must determine that using the temporarily permitted limits is in the best interests of the STIF and must make any necessary amendments to the STIF written plan to reflect these temporary changes. The temporary relief expires on July 20, 2020, unless otherwise modified.

Federal Reserve to adjust its supervisory approach due to the crisis

The Federal Reserve has released guidance stating that it will focus on monitoring and outreach to help financial institutions of all sizes understand the challenges and risks of the current environment. To do so, the Federal Reserve will temporarily reduce its examination activities—the greatest reduction affecting the smallest banks.

1In a subsequent joint statement, the agencies noted that banking organizations that elect to use the CARES Act relief may also elect the regulatory capital relief provided under the CECL interim final rule after the expiration of the CARES Act period, but a banking organization’s five-year transition period under the CECL interim final rule begins on the date it would have been required to adopt CECL under US GAAP, regardless of whether the banking organization uses the statutory relief.
2Due to the COVID-19 crisis, the agencies believe it is in the public interest to issue these modifications immediately without the standard comment period or the general requirement under the Administrative Procedures Act (APA) that there be a 30-day delay of the effective date for rules. The APA provides exceptions, for instance, for substantive rules that grant an exemption or relieve a restriction, or as otherwise provided by an agency for good cause. The Congressional Review Act provides a similar exception to a delayed effective date under that law when an agency finds good cause and provides a brief statement for its reasons why a delay would be contrary to the public interest.
3In one statement, for instance, the agencies said that they “support banking organizations that choose to use their capital and liquidity buffers to lend and undertake other supportive actions in a safe and sound manner. The agencies expect banking organizations to continue to manage their capital actions and liquidity risk prudently.”
4The range for the method 2 surcharge calculation is 0%–5.5% based on the magnitude of the entitiy’s reliance on wholesale funding.
5The countercyclical capital buffer has not been activated by the Federal Reserve.
6Please refer to our article on the Federal Reserve’s tailoring rule that created the category framework for enhanced prudential standards and other standards.
7In addition, generally the depository institution subsidiaries of the US G-SIB BHCs are also subject to the enhanced supplementary leverage ratio.
8The SCB final rule was issued on March 4, 2020. It applies to BHCs and US IHCs and becomes effective on May 18, 2020. Under the SCB final rule, the Federal Reserve will use the results of its supervisory stress test to establish the size of a firm’s stress capital buffer requirement, which replaces the static 2.5 percent of risk-weighted assets component of a firm’s capital conservation buffer requirement.
973 Fed. Reg. 55706 (Sept. 26, 2008) (concerning the Asset-Backed Commercial Paper Money Market Mutual Fund Liquidity Facility). 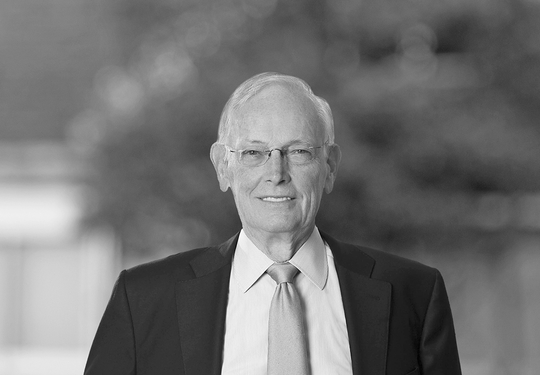 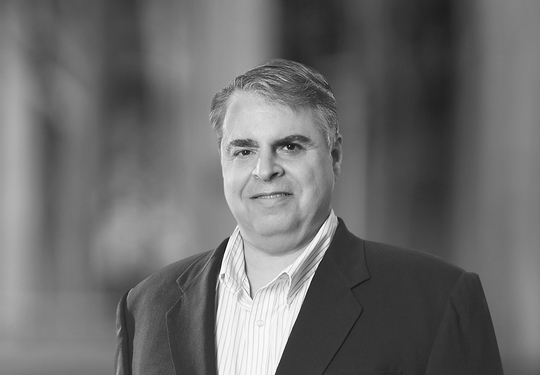