The NSIA is not limited to foreign investors, nor do target entities need to be UK-registered in order to be notifiable

On January 4, 2021, the long-anticipated National Security and Investment Act 2021 (NSIA) entered into force in the UK. The NSIA creates, for the first time in the UK, a mandatory obligation to secure clearance for certain types of transactions before they can be completed.

The NSIA takes a sector-based approach to assessing potential national security risks related to investment in (or acquisition of) businesses with activities in the UK, requiring notifications from investors acquiring stakes in entities active in "sensitive sectors" in the UK.

If the Secretary of State concludes that a transaction does indeed pose a national security risk, the deal can be unwound or blocked

Unusually for such regimes, the NSIA is not limited to foreign investors, nor do target entities need to be UK-registered in order to be notifiable. Even UK-on-UK investments require a notification if the NSIA mandatory notification criteria are satisfied. The obligation to notify lies with the prospective investor. Qualifying acquisitions are those that involve:

Notifications must be submitted to the Investment Screening Unit (ISU) at the Department of Business, Energy and Industrial Strategy (BEIS) via an online notification service.

Once a notification is accepted, its consideration can be divided into two parts:

BEIS's working assumption is that the most notifications will be cleared during the initial review period. Once a notification is confirmed as complete, this period lasts for 30 working days. During this period, the ISU can issue information notices (to request further detail to assist with completing the assessment) and attendance notices (requiring attendance at a meeting with the authorities).

Information/attendance notices issued during the review period do not stop the clock on the 30-working-day timescale. At the end of that period, the authorities will either clear the transaction or issue a "call-in notice."

If the authorities determine that the transaction may pose a risk to national security, then a call-in notice will be issued; the call-in notice brings the deal into the "assessment review" phase, which is initially set to 30 working days, although it can be extended by a further 45 working days. Information or attendance notices issued during the assessment review period, however, will stop the clock and so could push timelines further out.

During the assessment review period, authorities will assess whether the deal could pose a national security risk in the UK. BEIS has indicated that it will consider three factors in making this determination, although ultimately all reviews will be conducted on a case-by-case basis:

One of the more novel features of the NSIA regime is the potential for retrospective review.

The Secretary of State is empowered to issue a call-in notice for any deal closed from November 12, 2020. This general power to issue call-in notices is restricted to six months from the day the Secretary of State became aware of the transaction, or five years from the date of the acquisition. This limitation of the prospective period of issue of call-in notices, from five years to six months, is one of the reasons investors may wish to consider a voluntary notification. 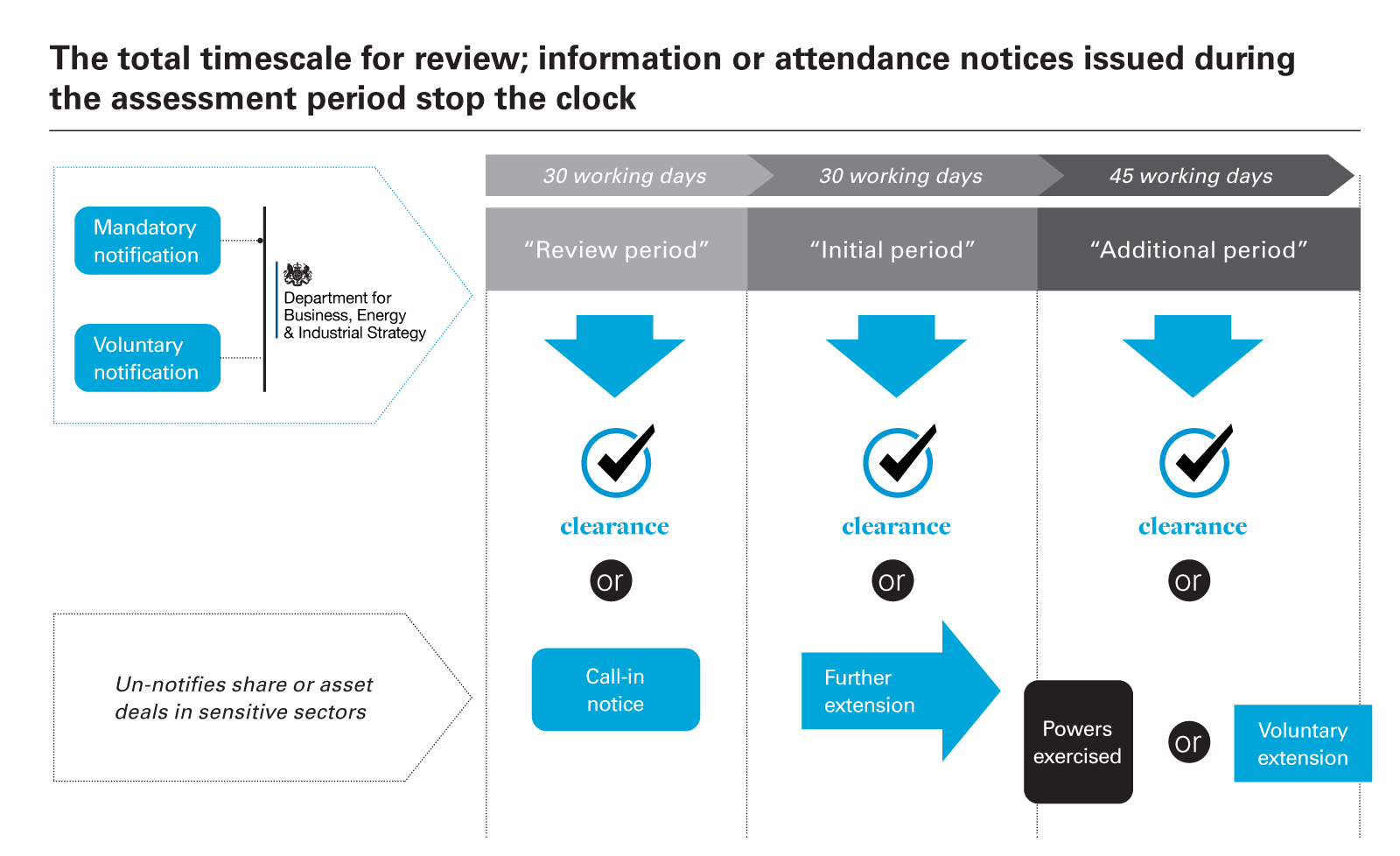 If the Secretary of State concludes that a transaction does pose a national security risk, the deal can be unwound or blocked, or subject to appropriate conditions. These conditions could include targeted divestments, undertakings with respect to management and key staff, or sensitive information ring-fencing, although ultimately conditions will be determined on a case-by-case basis.

Closing a notifiable transaction without approval is an offense that can carry both criminal and civil penalties. Potential fines for breach of the obligation to secure clearance before closing are set at the higher of 5 percent of total turnover (both in and outside the UK) and £10 million. A notifiable transaction completed without Secretary of State approval is also rendered void under the NSIA.

INTERACTION WITH THE ENTERPRISE ACT

Prior to the NSIA's entry into force, the UK government's powers to intervene were restricted to transactions that raised certain "public interest" considerations under the Enterprise Act 2002 (EA02).

The EA02 regime empowered the Secretary of State to issue a "public interest intervention notice" (PIIN) for transactions that might concern national security, media plurality, the stability of the UK's financial system and, in the wake of the COVID-19 pandemic, the capacity of the UK to combat a public health emergency. PIIN cases to date have focused significantly on national security, with roughly a quarter of cases focusing on media plurality and a small number on financial stability.

The "national security" heading has fallen away from the EA02 regime in favor of the NSIA, although it continues to apply to cases in the other three categories. The EA02 public interest regime will now be confined to transactions related to media plurality, financial stability and public health emergencies. Under the EA02 system, there is no obligation, nor indeed any option, for parties to pre-notify transactions for approval; it is up to the government to choose to intervene.

In terms of the interaction of the two regimes, the retrospective call-in review power will be inapplicable to transactions that have already been subject to a national security intervention under the EA02. In practice, that is unlikely to occur.