Lessons to keep in mind for your next complex global deal

Antitrust assessment by regulators around the world is becoming increasingly more complex and less predictable. And with global M&A activity approaching boom levels, companies need to plan carefully when preparing for their next big deal.

Global deals generally have to be notified in the EU (or its member states) and the United States, but filing requirements in a number of other jurisdictions are also often triggered, depending on the companies' worldwide activities. From the outset—when contemplating or negotiating the deal—the parties need to identify the jurisdictions where an antitrust filing is required, become familiar with each jurisdiction's precedents and processes and understand how their deal is likely to be assessed and if they need to make any concessions. Having a grasp of these issues helps CEOs and companies to build a merger timeline and reduce execution risk and uncertainty.

Working backwards in time and in a consistent manner across jurisdictions

Once the relevant jurisdictions and the respective clearance deadlines have been set out, the parties, outside counsel, and the economists involved need to identify what needs to be done each day of the transaction calendar per jurisdiction. The work plan should be set out by working backwards, starting from the date where clearance is required, in order to ensure that no step is overlooked. When a deal is notified in a number of jurisdictions, the regulators involved will exchange views and information about the transaction. Since the aftermath of attempted merger of General Electric and Honeywell in 2001—the first time that a proposed tie-up between two US companies had been blocked solely by European regulators—merger agencies in the EU and the US have adopted a consistent approach for global mergers and cooperate closely based on best practice guidelines. Even in jurisdictions that have traditionally been less predictable, like China, there is evidence of increased cooperation with other agencies involved. Against this background, the parties need a coordinated, global approach to ensure that they provide consistent information and tell a coherent story across jurisdictions. The goal is to avoid conflicting assessments and outcomes and inconsistent remedies by regulators when they review deals with global implications. 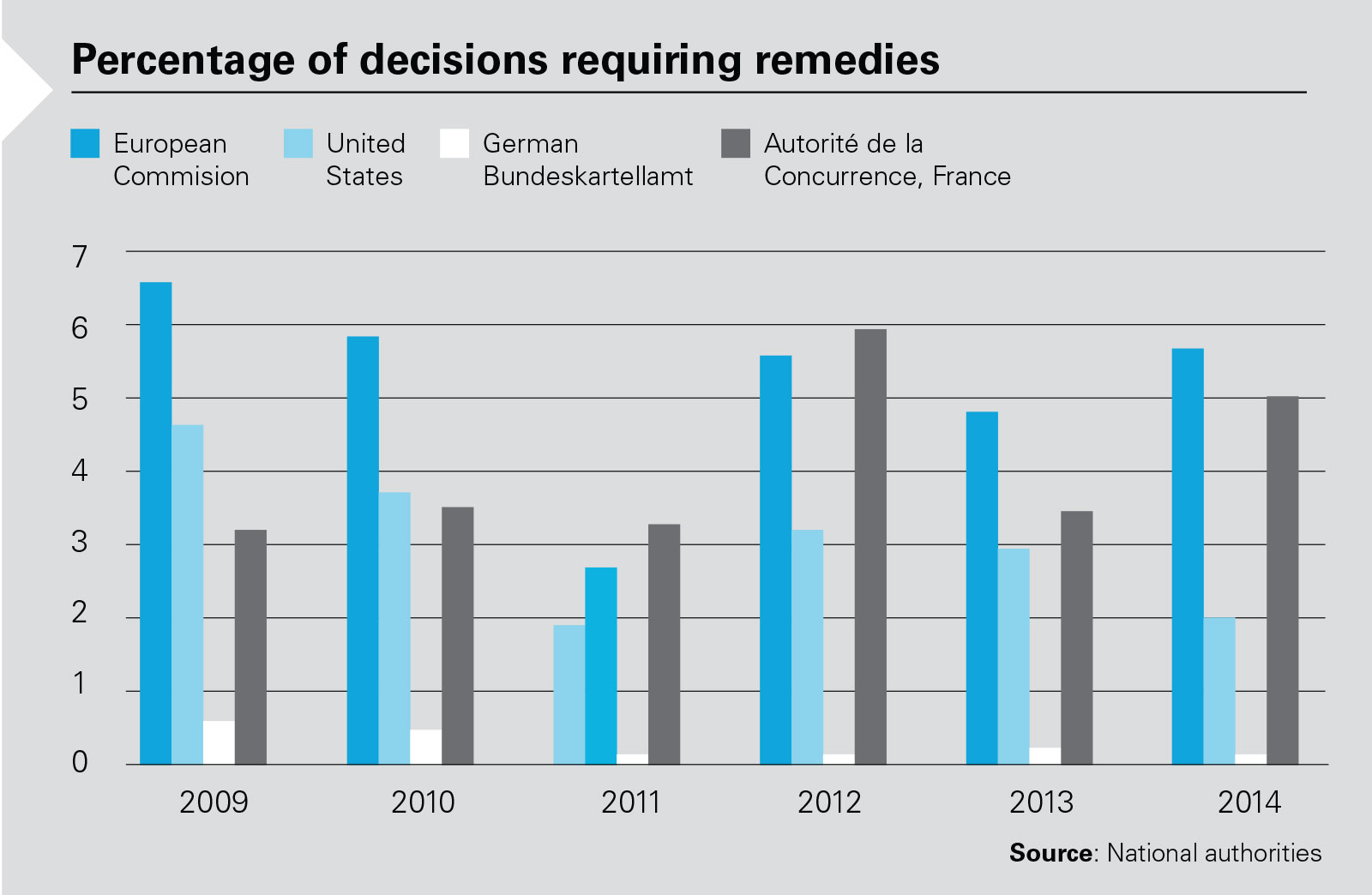 Be proactive, be organized, communicate with the regulators

Companies must be in the driving seat of the antitrust process. Frequent contact with the regulators helps to avoid surprises in timing and process. Has everything relevant been addressed? Have the agencies involved spoken to each other? Would it help to make an extra submission on a specific issue? These are some of the questions companies need to ask in order to ensure a smooth process. In complex cases with multiple products and markets, it is useful to identify early in the process areas where there are no concerns. This brings efficiency and speed to the process since both the parties and the regulators can focus on the issues that are actually problematic. Educating the agencies about the relevant products is key in this respect. Companies can make business people available for interviews, provide product presentations or offer site visits to enhance the regulators' understanding of the relevant industry. The companies' economists and the agencies should hold technical, informal meetings in order to define the areas on which data gathering should focus. Companies should also look at their internal records to identify evidence in support of their competition arguments, and proactively provide such evidence to the authorities. With in-depth antitrust reviews, regulators (mainly in the US, but recently also in the EU) ask companies to produce large amounts of internal documents, which could be relevant to the competitive landscape affected by the merger. It is important to ensure that the internal documents do not jeopardize the antitrust review; too bold statements often do not reflect reality and can be used by the authorities to the parties' disadvantage. Supporting evidence could mitigate such concerns. In addition, limiting the scope of the investigation is crucial for the document production exercise in terms of resources and potential risk of providing unhelpful documents. Finally, companies need to be prepared to reply to lengthy requests for information by the authorities on very tight deadlines. Although extensions are sometimes granted, the case teams rarely take account of the real-life practicalities of extracting detailed and precise information from global businesses in a very short time frame. To deal with these deadlines, companies should set up a pool of business persons who take ownership of specific areas relevant to the antitrust process and are responsible for  responding to such requests. These persons understand the urgency of the requests, the relevant antitrust process, the purpose of the data-gathering exercise and the message that the company wants to convey when responding to the questionnaire.

To settle or not to settle, and when?

Despite the companies' efforts to convince the regulators about the benefits of a merger, there are instances in which a consolidation may lead to a dominant position of the merged firm in specific markets, with limited competition left. The parties need then to be prepared to offer a remedy package to alleviate competition concerns.

Where markets are well-defined, numerous legal precedents exist and reliable data are available, it is easier to identify potentially problematic areas. In such cases, if a structural divestment solution is possible and relatively obvious, companies may opt to provide to the regulator a remedy proposal early in the process in order to avoid an in-depth review. During 2015, a number of pharmaceutical mergers were approved by the EU regulator very quickly because the parties presented a comprehensive remedy package from the outset. On the other hand, if a structural solution is not immediately available or desirable and the parties prefer to defend the case, the parties may start considering remedies later in the process. Negotiating remedies in one jurisdiction must always take into consideration possible repercussions in others. In some cases, a global remedy will successfully address the concerns of the regulators across all jurisdictions. In other cases, remedy packages will differ from jurisdiction to jurisdiction. It is therefore key to ensure that the overall integrity of the deal is not harmed. Finding potential buyers for the divested assets early in the process and having them approved in good time by the regulators is also crucial. In most cases, identifying a global buyer is the simplest approach, as it ensures seamless divestitures, one set of transaction documents, negotiations with one purchaser only and approval of the same buyer by the various agencies. In other cases, companies may prefer to have different buyers in each jurisdiction to avoid strengthening a global competitor, or in case some buyers are deemed unsuitable by certain authorities. The process of implementing a remedy can also be complex, and therefore advance planning is necessary. Often a trustee will be appointed to review the appropriate implementation of the remedy and the transition of the business to the relevant buyer. The parties need to ensure a smooth transition so that the trustee's reports to the regulators do not raise any concern.